Skreitung is the common language spoken by goblins and other citizens of the Heraðsríki. It is based on a humanoid vocal structure, however, which makes communicating in verbal Skreitung difficult for those with different vocal structures. Skreitung is spoken across the world thanks to recent globalization, but originated in southwestern Eren. In fact, by technicality, Skreitung is a language family, as it has several regional dialects. The most common is Kruunu, or Crown, Skreitung, though Bay Tradespeak is widely spoken around Eren's western coast and the Maoganai islands. Certain regions have also blended other languages with Skreitung to form local creoles. 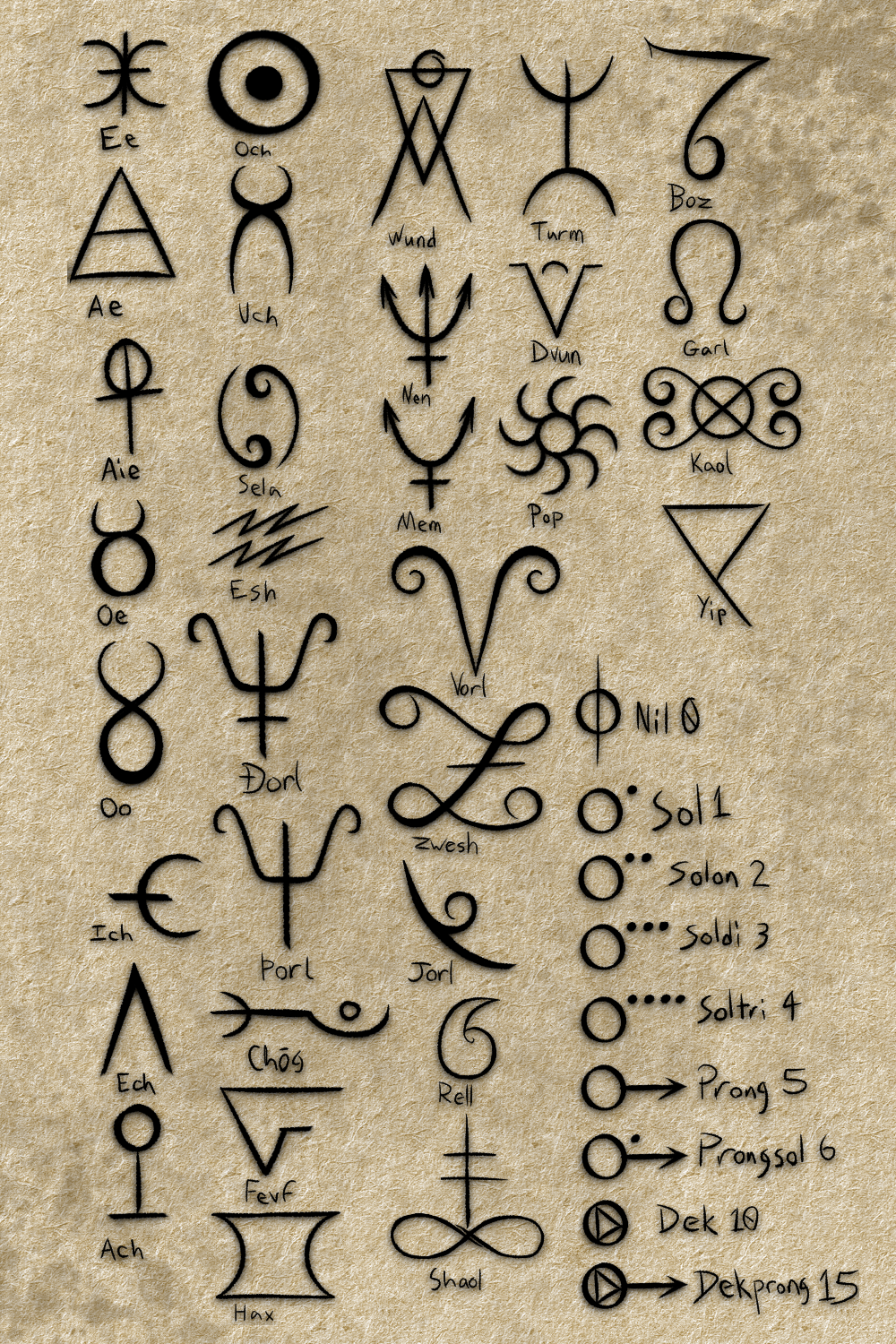 Skreitung uses a set of suffixes to signify certain additive aspects of nouns and verbs, such as plurality and tense.

The Skreitung alphabet is composed of 33 symbols, each representing a phoneme. The phonemes and their corresponding letters are:

Each multiple of Prong (5) has a structural change to the numeral which then has dots added to it. Each new Dek is added to the right of the previous one, forming a chain until Kenta (100, not shown) is reached. A complex Dek has a prefix (on-, di-, tri-, etc) representing the number of Deks it contains.

Skreitung's word order is not as rigid as other languages, but in the case of certain verb tenses and adjectives a specific word order is important to determine meaning. The language uses a loose SVO structure. However, it has a curious view of the possessive tense and its suffix:

In the case of present progressive verbs, the subject is perceived to have that verb as a state of being, and so the possessive noun suffix -di is used to denote this.

In addition, when adjectives or intensity modifiers are added to verbs, the verb is perceived to have that adjective or modifier, and thus the suffix -di is added to the verb.

ymmärildi verður
— "must understand," lit. "understand have must"

In addition to pronouns for self (I/me/my), direct other (you/yours), and self-group (we/ours), Skreitung has two sets of indirect other pronouns: the personal (he/she/they) and impersonal (it/them).

These are the most basic, vital words of Skreitung that are able to convey universal meanings; things like affirmative/negative, greeting, query, and frustration.

Some common verbs of Skreitung:

Some common nouns of Skreitung: *These can also be used as adjectives.

I've read this before. Goodness, you have everything all figured out! It's incredible to see such detail put into the creation of this language!

Thank you very much!!! This is probably my most in-depth conlang to date, and I'm pleased it comes across as well-developed!