The blessing of Gazezu be upon us. May she shield us from any storm, navigate us around any cliff and stave away any thirst.
But most of all, may she help us never to cross paths with Dimi of Treos.
-- Common prayer of merchants travelling the Straight of Storms

Dimi of Treos is one of the most influential and most feared of the seven great pirate captains and one of the Lords of Bren. Infamous for his merciless and strategic raids along the coast of Baradolia and Affeiand and the capture of the islands-fortress on Ganaeios with only one ship.

It is said that he drowned the last captain who tried to cross him but he also is known for rewarding loyalty towards him.

Dimi is in general fit condition, however he lost an eye in his early youth. He claims it was during a fight with an alligator.

Black and grey long hair and a beard of the same color.

He covers up his missing eye with a silver-grey eyepatch and always wears a bloody red scarf.

Dimi of Treos is famous for recently founding the Anvil of Bren, a collection of smiths, alloymagicians and scientists working together to improve the whole fleet of Bren with the newest in technology concerning ship construction and weapon design.

Not all members of this organization entered on their own will - some were coerced, some were brought back from recent raids. But they are said to now enjoy a very comfortable life away from Baradolian buerocracy.

The technological boost this brought to the Brennian fleet is remarkable. 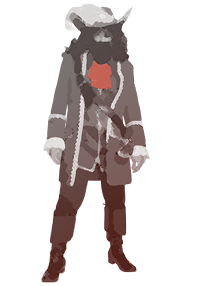 Heroes of a new Dawn

An excellent response to the challenge! I thoroughly enjoyed your visual descriptions of this mighty pirate captain. It sounds like he has had many epic adventures during his travels, the stuff of legends!

And he is the first of the Heroes of a New Dawn - Characters of central significance that are present at the current date of the world.

I like the idea of the various people of Anvil of Bren arriving from different means, but still enjoying life away from bureacracy.