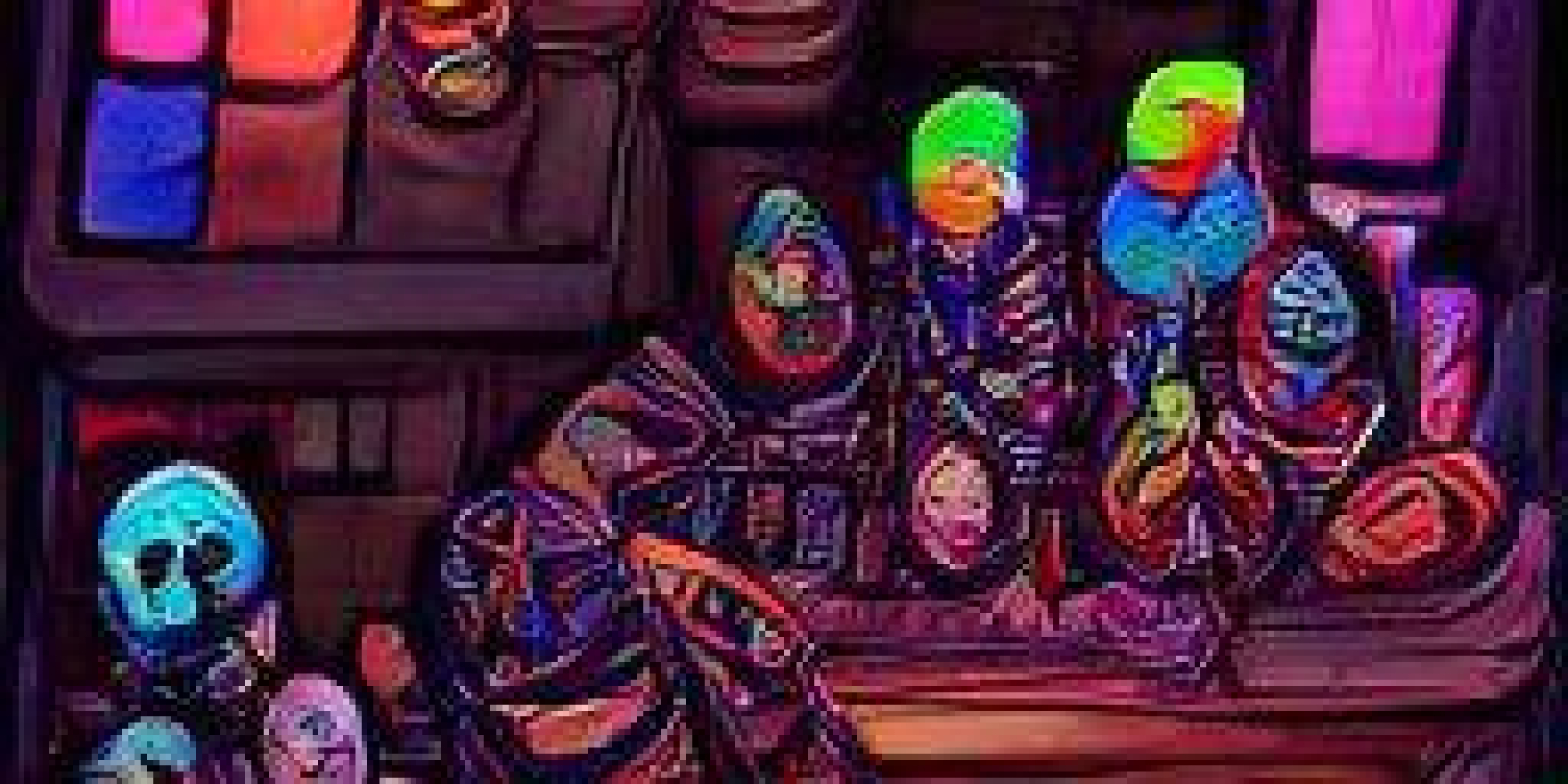 Grasp the feather tight my dear, and wish the world away
You need hope or answers, so close your eyes and pray
Though destiny might beckon like an old familiar friend
Legends in time fade away, and dear, All Stories Inned

On the far outskirts of the Astral Plane lies a tiny island rising from the Sea of Souls. One side of the island holds rocky cobblestone steps that stand, timeless, marching out of the Sea regardless of wind or tides. At the top of the steps stands a building, hewn out of the deep black lumber of a Ghost Pomagranate tree and roofed in the glowing white branches of [Forgotten Oranges]. This is the All Stories Inned, a landmark that sits outside of the constraints of time and space, life and death, where the souls of heroes celebrate the tales that made them into legends.

Here is where one can find the souls of those brave adventurers that fell in battle, and the souls of their companions who made it through to their version of a happily ever after, merrily reminiscing over their adventures, and describing climactic battles and peaceful resolutions to those who did not live to see them. There are countless half-full tables where parties with still-living members wait, ordering another round of pomegranate wine and setting up another game of cards or chess while they wait for their erstwile friends to pass on. And at the bar, countless familiar faces from legend sit, heroes so ancient that even their world-shattering deeds have been lost to the passage of time, memories turning to history turning to legend turning to silence.   As a resting place for those whose tale is complete it is rare that a living being ever enters the All Stories Inned. Indeed, even those few mortals who have braved the dangers of the Astral plane alive may not know of it's existence, for the only way for those who yet draw breath to enter the All Stories Inned is by invitation. But sometimes, in the darkest hour, when hope has fled and vital information is lost, a brillant green feather is given to someone, and they are told to hold it tight, close their eyes, and ask their query. And when they open their eyes again, they will find themselves in the All Stories Inned, at just the right time to meet the soul or souls that can help them.

Many millennia after the All Stories Inned was built, after Qwolia and his friends had ceased their cycle of rebirth, a living adventurer cried out in despair so deep it echoed across the Material Plane.  The last surviving member of a party that had been questing to reverse a widespread wizard's curse, her last hope for finding the knowledge she needed had just been destroyed.  The necromantic ritual which was designed to call upon one of the souls who had witnessed the curse being cast had just fizzled out, a clear sign that the soul was no longer in the Astral Plane's Sea of Souls and had instead been reborn into a new life, with no memories of their past experience.   Her desperate sobs cut through the very fabric of the world, and in a great heave of cosmic folly she tapped deeper into the source of her clerical power, drawing on far more than her body could ordinarily withstand.  Her patron, the god of brewers and bakers, tried to hold his power back, to keep her from burning herself up, but she dug deeper and deeper, the iridescent hummingbird plume on her head flushing a deep green as she tried to drive the ritual beyond the boundary of rebirth.  The power arched up around her, glowing a blue so bright she was forced to shut her eyes as it overwhelmed her.   And then the light died down, and she opened her eyes to the sight of a strange tavern filled to the brim with people of every shape and size.  But unlike a normal tavern, filled primarily with local workers and the occasional adventurer, this tavern appeared to be full to bursting with high-level wizards and warlocks, rouges so skilled they seemed to vanish into the shadows and every manner of renowned bard and paladin.  All that quickly faded into the background, though, as she spotted someone at one of the tables on the other end of the tavern. There, rolling out a dice game and sipping at a deep red wine, was the person she had been trying to raise through necromancy.  She shoved her way over to him, uncaring who she passed, and stood before him, tears pouring down her face.  She tried, mostly successfully, to wrest her emotions back under control, and only then did she realize that everyone in the tavern was staring at her.     As she looked around, she noticed that not only were the patron all clearly high-level adventurers, they also seemed to be not quite there, almost translucent and wavery, instead of solid, physical beings.  With a start, she realized that she had made it to a place only spoken of in legends; the All Stories Inned.  She swallowed down her fears and her grief, and turned to the man she had sought out, ignoring the rest of the tavern as they slowly went back to what they were doing before.  She managed, after one or two false starts, to get answers on how to undo the wizard's curse, scribbling the answers down onto a piece of parchment with a feather tugged from her own plume.   It was only once she had the answers she needed that she realized she had no way to get back to the Material Plane.  She had defied time and space to get to where she needed to be, and channeling the amount of divine power that had gotten her here had nearly burned her out, and using it a second time would almost certainly kill her.  Still, she had no other options to get the information back to the Material Plane, so she steeled herself and once again reached for that wellspring of power.  And then, with a blaze of blue light, she vanished once more.   The adventurer never made it back to the Material Plane.  The divine power, in the end, was too much for her mortal body to handle, but the parchment where she had written the cure for the curse made it back, and was picked up by an adventurer who went on to lift it.  And to this day, when times are dark and answers lost to time, an adventurer will sometimes find a brilliant green hummingbird feather, that with a wish and a prayer will take them to the All Stories Inned, exactly when they need to be there.
Type
Pub / Tavern / Restaurant
Parent Location
Astral Plane
Owner
Qwolia