The most important divine beings worshipped by the Farens are the Táldaran, spirits of their dead ancestors.

Connection with the ancestors is very deep and personal. The ancestors live in the family home with the living members, usually residing in a small house-altar on the back yard. The ancestors are involved in all of the daily life of the family, they are offered meals when the family eats, and are saluted when arriving and leaving. Their opininon is asked before any important desicions such as marriage deals are made.   In return the ancestors protect their families against evil spirits and bad intentions of outsiders. The ancestors also work as intermediaries between the living and the other divines of the world. Those who care well for their ancestors can rest assured, that they will also be loved and cared for after their passing.   Although the ancestors are very personal and details of the relationship is not shared with outsiders, Farens are keen to know how they are related to the other people in the community, in case they share any common ancestors. It is vitally important to pay respects at the home altar when visiting a relative's house, where a common ancestor is residing.

Sometimes disputes broken out in a family over whose house an ancestor is living in. Sometimes multiple spirits of important people are claimed to exist, which has caused a lot of confusion and even small-scale wars. Sometimes these fights have been settled peacefully by relocating the spirits into the same house.

The family members communicate directly with the ancestors without much rituals, and their presense is felt all over the house. However, most ancestors are quite shy and don't appear to outsiders. The good will of the ancestors can be guaranteened by presents and flattering.   Sometimes a professional divinator is asked to interpret for the ancestors. This is especially useful with the old dead, ancestors that have began to fade, and have become errant and harder to communicate with. Finally in the end stages of the ancestor divinators can perform rites to ease the ancestor's passing into the waumin, land of the dead. 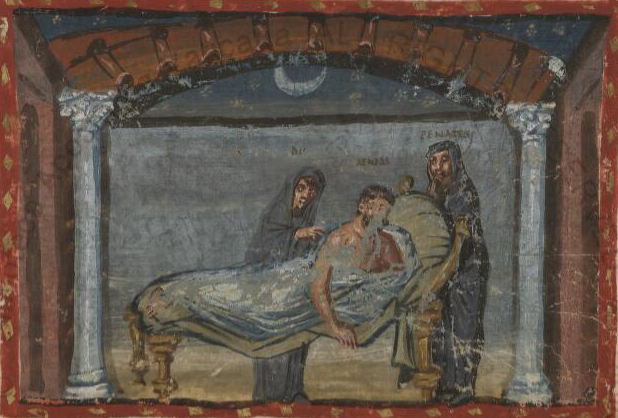 by Unknown (4th century)
Ancestors watching over a sleeping man

The Zeribians think that worhiping one's own relatives over true gods is pretty arrogant. Zeribians only worship ancestors that are particularly important. Zeribians don't believe in keeping the ancestors captive in this world, but think that they should be set free for eventual rebirth.

Some believe, that the ancestor spirits are actually free nature spirits, that are only taking up the appearance of ancestors. They use all hints given to do this. Does the grave have a statue of the ancestor? They can mimic it. When the relatives talk on the graves, they can learn things. If a person visits the grave before and then dies and is buried in the ancestral grave, the spirits can remember that person. In the end the local spirits can do this quite convincingly. But in the process they become hugely invested in helping this one family, so one could say they truely become the ancestors in a way.