I have held this position for 730 years and before that my father held the title from the moment our organisation was created. It's a position that is ideal for a Dragon. We do not think in short term gains, we look ahead because we are most likely still alive several centuries in the future. Who can teach people better about history than someone who lived through it. Who can teach people better about the world than someone who studied and learned for centuries.
— High Sage Syronikir

The Keepers are known throughout the world as a wise organisation. They hold the largest amount of books in their Adroon Library and have opened many universities all across Farlis. On top of this organisation is the wisest of the entire order, the high sage. Strangely enough this title has been held by one individual for 730 years, the Azure Dragon Syronikir. 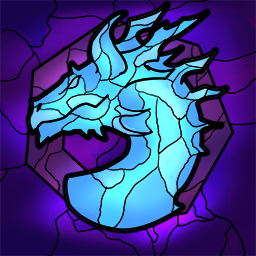 The Keepers have been around since shortly before the fall of the Avaronian Empire. Originally the organisation was founded by Dragonborn who dedicated themselves to keeping records of historical events, religions and sciences safe from harm.   When they started looking for a leader they decided to go for the wisest creature in the land, the ancient Dragon Felashim, father of Syronikir. Under his leadership the Keepers flourished and they gathered as much knowledge as they could. This culminated into the library of Adroon, built inside a large cliff along the Adroon oasis. Eventually the library would become the largest in the world and ever more rooms would be excavated.

Before Felashim died he appointed his daughter, Syronikir, as his successor. The reason he chose her instead of his other children is because he saw Syronikir as the wisest and most educated of his offspring. She followed in his footsteps and would make many new additions to the organisation such as the creation of the Encyclopedia Nioratha and the founding of many universities.

A high sage has several duties. Not only to the organisation but also to the world outside and even the country of Aldhir. Since the library is located in Aldhir, the high sage is seen as a valuable counselor to the government. The high sage advices on many matters in regard to history, science and politics.   Within the order itself the high sage is responsible for appointing high ranking members. Another important task is deciding what the way foward for the organisation will be. This includes deciding upon which information to procure, funding expeditions and research and updating courses based on new information.   Unknown to almost everyone, however, there is also a more hidden branch, the Shadow Sages, that often steal information or artifacts that are deemed to dangerous for other people. Many Asmer technologies have been hidden away in this manner.

There has only been one precedent for succession in the Keepers organization and this was mainly based on a subjective basis. Syronikir herself has many children and does have her favorites but wants to make things more democratic.   She has elected several of her children and other Dragons that she deems wise as candidates for taking the title after her death. When the time would come to choose all of the chancellors of the order will choose among themselves who the next in line will be.

It seems like a position almost for the simple sake of having a name for the position. They are leaders of the keepers, so it would mean they would need a title. But do the really *need* the title?

Not certain if I understand the question :p She is the leader of the keepers which means she gets a title which is high sage for that position. But isn't that for many titles just the case like mayor or king? :p

To rephrase, I feel that Syronikir may be indifferent to toe title, more focused on the position itself. Or: she's not one for Semantics and uses the title just to reduce confusion. I could be completely off-point with this, however.

She herself does not care for the title itself as much indeed. It is more that the other people around her mostly refer to her as high sage or high sage Syronikir. It almost never happens that people would just call her Syronikir.

Love seeing a world using the fact that there are species with different life spans to benefit historical record-keeping!   I was most fascinated of all by the Shadow Sages though xD They sound like an interesting organization that is bound to have lots of potential hooks to use in stories. I also really liked that Syronikir is trying to make the organization a bit more democratic. Nice touch, though I wish we got a bit of insight as to why did she make that decision.

Thank you for the kind words !^^ Yes those shadow sages are certainly interesting as well and I made them into a profession article this WE which I apperently did not link yet :p   The reason why Syronikir want to make things more democratic is because the world in general has started adapting more and more democratic values in general and therefore wants to make changes because people start to expect it more or less . It is more to prevent future internal strife.