Warning. This article speaks of homosexuality, unhealthy relationships, and both violence and discrimination based on sexuality.

Kelimzar of No House is desperately trying to find himself after the unfortunate mess that messed his life. On the course of just 2 weeks, noble-born Solomph of house Dustblood became first Dirt the Beggar and after surprising set of circumstances he became Kelimzar, bodyguard of lady May'chalithra Palefury.

Kelimzar is close to 100-year-old drow male, who received military training and was part of Yanta Menohtar before scandal that made him fall from grace. Loyal, easy-going, observant, and well-mannered young drow tries to find himself and his new place in the world.

In the game, player character May'chalithra Palefury has pretty much adopted Kelimzar to herself. After the awkward start, two have become more close to one another, and friendship is budding between the two. May has taken it to herself to find out all parties who were involved in her new friend's downfall, and possibly avenge them the bad treatment Kelimzar had to go through.

May would also be responsible for Kelimzar's new name, which she gave to him as a tribute to his singing voice.

While not particularly tall, Kelimzar is very muscular as an elf. He is physically strong and agile. Due to his military career, he is in very fit shape and has almost recovered from all his injuries from the falling out with his family. He is broad-shouldered male drow with light purple skin. He has a very angular build and handsome face with a strong jaw, and warm-toned white hair.

Kelimzar makes some effort to not get too much attention to himself, by choosing his clothing - whenever possible - to fit situations, he is in most boring possible way. His employer May'chalithra does not always agree with this sentiment, which case he goes with whatever elaborate clothing piece the mistress has in mind.

Kelimzar can be seen wearing armor and a greatsword.

Kelimzar's specialty is in using heavy weapons, with a preference towards greatswords. He has received extended military training but is also well versed in diplomacy.

Solomph was born to Kharazild of House Dustblood in Apr 17th, year 3950. Young Solomph showed excellent promise on military career and was sent to Netehdrez to study in Thalack Nost to become part of the Yanta Menohtar in his mid 20's.

After his training, Solomph was set in the city guard in his home city Zaetron Derraz. In late 4046, Solomph's aunt, matron Larayne of the House Dustblood and young matron Vasdiira Silverblade started to negotiate of alliance between the two families, and Solomph was to be married for the young matron.

But things would get complicated. Solomph was introduced to his fiancee's older brother, Ranvyrin Silverblade. Ranvyrin was Solomph's superiours in Yanta Menohtar, and notoriously infamous of having relationships with younger men. Ranvyrin managed to charm Solomph, and Solomph would build a crush towards him. Ranvyrin was first very pleasant, but soon would start to use his influence to coerse Solomph deeper to the relationship than he actually was comfortable with. The relationship was eventually found out and upset the fiancee to a point, that made the Dustblood family disown Solomph.

Solomph would live in streets, hiding, for couple of weeks before being discovered by May'chalithra Palefury. May'chalithra hired Solomph as her bodyguard and renamed him Kelimzar, as he helped her to solve a case of robbed warehouse and hunting cottage of the Palefury family. Kelimzar has since settled in, and is helping May'chalithra with his best efforts.

Kelimzar was trained in combat by several tutors and spent 10 years receiving education and socializing in Uuthli Xenastin. His school years between general education included singing, court manners, dancing, strategy, and public speech, as his mother wanted to make sure he would be fit both to the battlefield and to palace grounds to better his marital prospects.

After working years for Yanta Menohtar, Kelimzar is now the personal bodyguard of May'chalithra Palefury. His job includes keeping her safe, as well as her confidant.

After desperately trying to ignore his feelings, Kelimzar received the first real sense of acceptance towards his feelings from Ranvyrin, who unfortunately took advantage of him. The reveal of the relationship and the downfall it caused have left scars on poor Kelimzar.

Kelimzar has become nervous and uncomfortable around other men, worried about being hurt either because of his sexuality or ending up being taken advantage of again. Despite the support he has gotten from his friends, he is still working out his shame and guilt that the incident caused. He also feels deep sadness for losing his family, blaming himself for all that has happened.

Smart, laidback, and pleasure to be around - those are the most recognizable features of Kelimzar. While not most well-read person, unless it is in the matters of fighting pit statistics, Kelimzar can be very insightful and even treacherous when required, though he prefers a fair diplomatic approach.

Honor and altruism are important to Kelimzar, and he is fiercely loyal to people he considers his own. This has made his situation increasingly complicated after he was disowned from his birth family. He believes in second chances and considering things in all angles, though he gets easily suspicious and concerned about forceful personalities.

After his downfall, Kelimzar was picked up by May'chalithra Palefury, whom he has then become fast friends with. He has also is friendly terms with May's older brother Izzton Palefury, even if their friendship is still a bit awkward at times.

Social interactions cause no trouble for Kelimzar. He is well trained in courtly manners and good with people, observant and talented performer, with a particularly beautiful singing voice. He is humble and well-mannered, and thus easy to take to any gathering. 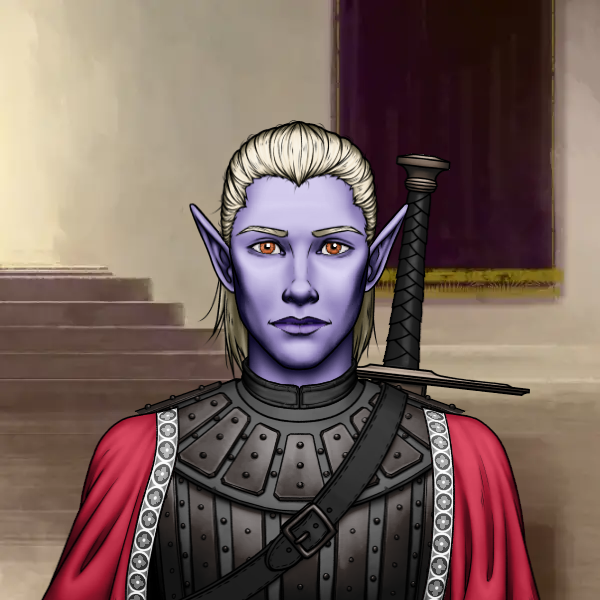