Mitrofan Anfisov is a Norik hegumen of the Holy Veil monastery in Udyn's Nart Quarter. He appears to be a no-nonsense hieromonk who is well-connected, and wields a significant amount of clout in his community, though he is averse to taking excessive risks. He is also one to recommend confession as a balm for the soul to Gaalites in good standing, though he is not excessively pushy about it.   Most of the companions first encountered Mitrofan as a potential buyer of the cow they had brought to Udyn. Mitrofan tried to talk down the price, but when he learned of the travails the party had been through to reach Udyn, he offered them respite at the monastery, and took Yuri's confession. He was not entirely happy to learn that the cow had been stolen from a person who was killed. But he does grant Yuri absolution, though he warns him that the curse lies heavily on him and his companions as a result of the murder.   To aid Yuri in his quest to redeem his kin, Mitrofan recommends selling his (and Fedor's) horses quickly, but when the younger man objects, and asks for job recommendations, Mitrofan mentions that the big Gaalite cemetery at the Irii Church has of late been harried by unclean beings, and if he agrees to serve as a watchman, Mitrofan can see about collecting money for his support from the local parishioners. After the companions drive back what turn out to be grave robbers, and discover a secret tunnel going back into the main city, Mitrofan warns them against seeking them out for trouble, suggesting that they probably won't be back for some time. He offers Yuri ministration for the knife wound that left him paralyzed overnight.   Mitrofan also suggests that the party seek out Noriki princes who sometimes stay with local notables in the Nart Quarter. These can offer protection, though Mitrofan himself is strongly opposed to party members entering open conflict with anyone who has the support of the local authorities while they are under his protection.   Mitrofan is also the uncle of Agapia Vladimirovna, a child of his sister Akulina. Akulina was also a priest, like her brother, though she left Udyn, and lived as a hermit in the woods. She died, and Agapia returned to Udyn, and is being cared for by Mitrofan at the monastery. He also watches over Agapia's friend Khariton, who is an orphan.   As Agapia has on occasion delivered alcoholic beverages to a tavern in the main town, Mitrofan is also aware of the presence of the criminal Banu Tabar organization in Udyn. In response to Lokan's query about such a group, Mitrofan offers to have Agapia send them there, though again, he warns the companions to stay out of trouble. While he tolerates Agapia's sometime involvement with shady elements, he is highly critical of her if she engages in questionable behavior herself. He protected her after she was caught shoplifting at a nearby market, but he subsequently punished her by locking her up in a cell overnight. When she later escaped from her punishment prematurely, the hegumen brought her back again, and locked her up for several more days. A brother summoned him when he saw Agapia trying to escape, but Mitrofan could not find her again.   After a recent discussion with Lokan about the fate of his immortal soul, he scheduled a time for him to be baptized into the True Confession. This has now taken place, and Lokan has adopted the Gaalite name Nikolai. The hegumen also undertook a collection from the faithful to pay for the party's guardianship of the cemetery at the Irii Church, and he presented Lokan with the proceeds following his baptism. He wanted to take part of the proceeds as payment for the baptism ceremony, but when Lokan spoke about their recent problems with the vizier, and the party's intention to hunt down Yaqub in order to free Yuri's betrothed, the hegumen said he would waive the fee if the party simply left town as soon as possible, since their presence was endangering the Gaalites of the Nart Quarter. He also seemed unhappy about the fact that Yuri was apparently abandoned to his fate after being imprisoned by the vizier. He headed to the citadel, apparently to beg the vizier to release Yuri. After brining the cossack to speak to Princess Botagöz, who told him of her vision of the city being destroyed by fire, the vizier was willing to release him, as long as the hegumen vouched for the fact that he would abandon his quest to kill Yaqub. Yuri, however, refused to make the pledge himself, and the hegumen left, exasperated.   When the party's troubles with the vizier began, Mitrofan began to feel insecure. After he learned that Yuri had been taken, he asked Lokan and Alden to leave the monastery, as they were endangering its well-being. He intimated that he thought the graverobbers were part of a plan of the city authorities to pressure Gaalites. He saw Lokan and Alden again the following day, looking for Agapia. The hegumen was unhappy that they were still around, but he told them that he had not seen his niece in two days.   The hegumen is a 40-ish bearded man dressed in a monk's habits. He still administers the Holy Veil cemetery, and still lives in the Nart Quarter.   He appears in Chapter 8, 9, 10, 11, 12, 13, and 14. 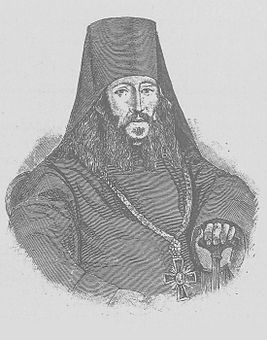