One of the Rela Creatures, Muzoval are seen as outcasts for their strange habits, physique, and mysterious origins. To the world, they seemed to have merely appeared one generation, no prior indication that they, or any of their ancestors, had ever existed. They had customs, traditions, and stories that would lead many to think they had a long history, but that history seems to have been from some far off land none had contact with.

Nearly all Muzoval are nomadic, having a strong sensation that they can not stay in one place for too long. Each area they go, they adopt the customs and ideals of where they are. The only unity between each other from disparate areas is an idea of past belonging. When one band meets another on their travels, they feel a sensation of unison with them, though they may have never met before in life.

The stories they tell each other and for those who listen weave fantastical things that entrance audiences. Many use these stories as a basis for their own, crafting plays and dramas of whimsical tales and righteous morals. Even to the Muzoval who had came with these stories, they are known to be fiction to teach young morality rather than debatable facts of history. 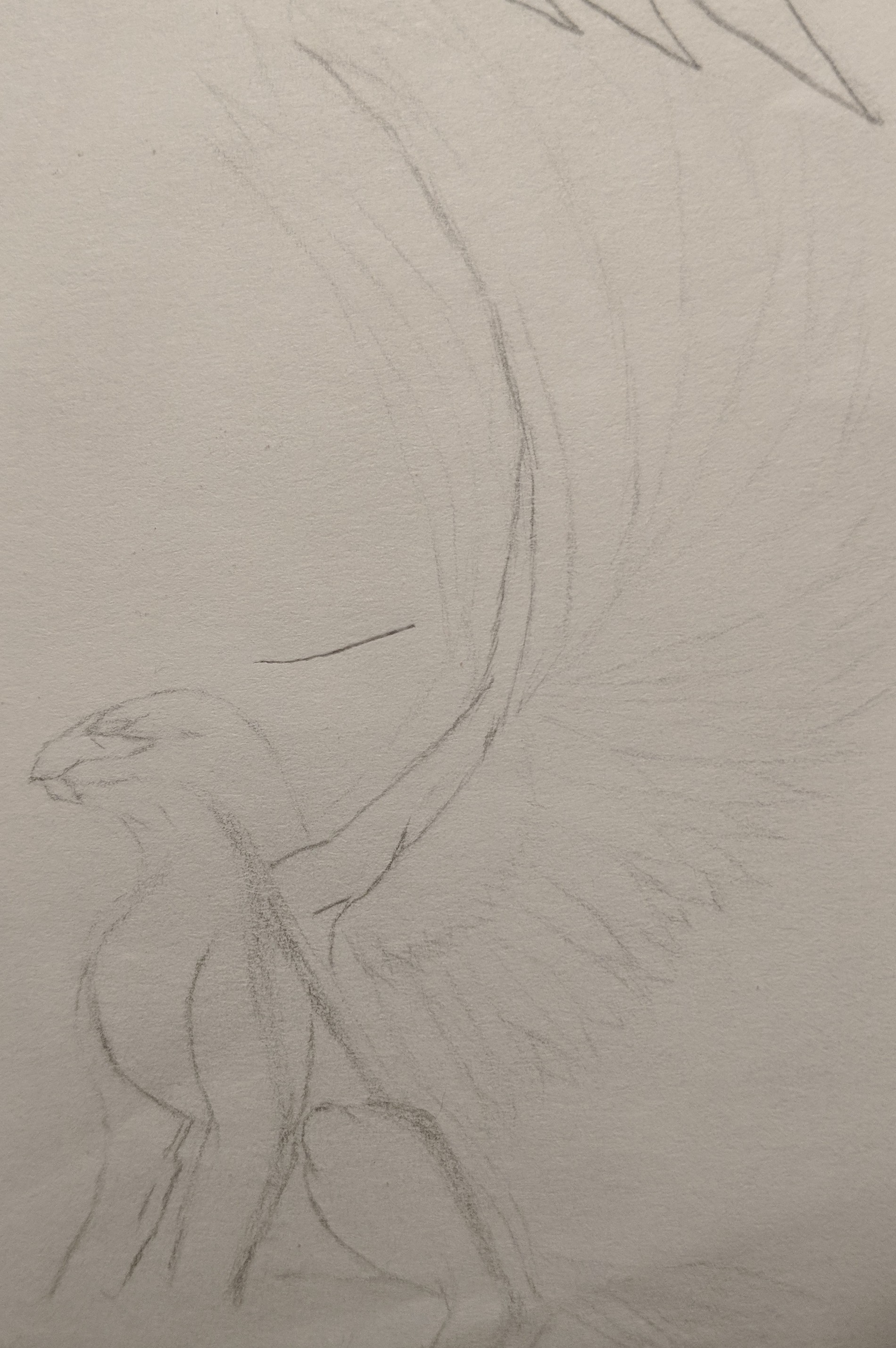 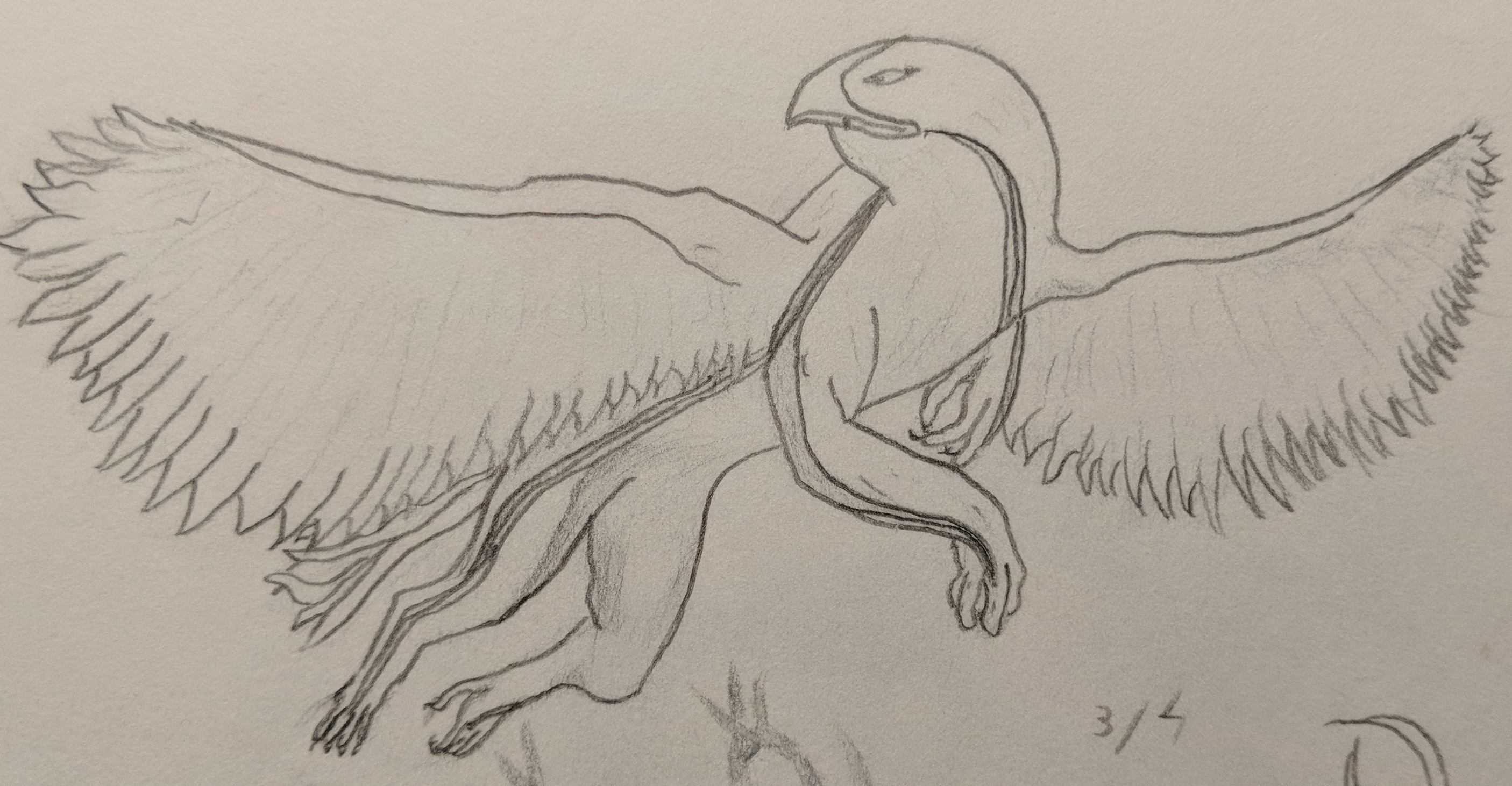 They have four legs to run as a dog, can contort their body and tail to swim like a porpoise, can use their wings to fly, and are able to blink short distances. The mostly spend their time moseying across land, but will use any technique at their disposal if need be.
Colors: shades of blue and green. Some that have traveled east are also orange and red. They have darker feathers on their sides and backs with lighter colors on their bellies.

Their bodies are covered in Scaethers. They are able to, similar to how birds control their feathers, frey or contract their scaethers to be more scale like or more feather like. Each scaether has a thin strand of muscle through the rachis that pulls the barbs to be tighter or more loose.

Once a year, muzoval spend several weeks molting. The stay in one place while their old musty scaethers fall to the ground and they rapidly grow new clean scaethers. If a scather is plucked before it drops naturally, it takes until they molt to replace it. They usually molt just after their eggs hatch, having their young exposed to foreign filth to build their immune systems while being protected, if need be, by their clean parents.

At the base of their scaethers, under their skin, they produce an oil that repels water, wind, and dirt, as well as being flame retardant. This oil is highly coveted to protect all forms of products, from clothes to tables. And due to this, many Muzoval, when visiting a settlement, pawn of their excess oil to gain enough money to sustain them until the next settlement.

Wings
Their wings have long more feather like scathers very similar to birds.
The appendages that hold their wings are digitless, but have malleable segmented bone in them to move as tentacles do.

When they have their wings retracted, they move their limbs tightly to their side. They angle their wings scathers in such a way that they create a fin like structure on their back (or like a butterfly's wings)
Their contour scaethers have more muscles in them and are able to move more freely at the base and have more minute contractions in their frays than the rest of the scaethers on their bodies

Their ankles are almost halfway up where their knee would be

They walk on pads on the ends of their digits.
When on land their digits are held together into one unit
Their digits are webbed with skin and no scaethers
Their digits can be splayed to create fins (the use the fins and tail scathers to swim like dolphins or whales do) Tail(s)
They have two to five limbs on their rear end. These limbs are the same as their wings, but have more bone in them.
The tails are also much more thin, at a glance they look like a thin scaether (without the scaethers covering them)

Although the limbs are separate, they act more as digits and even more so as one unit than multiple.
Their tails scaethers are the same tentacle structure as their wings, but having less muscles than in the wings

Their tails are completely hidden by a bushel of scaethers

Their tales similar to a birds tail in looks, though even more dexterous

Their heads are just as wide as their body

Their heads are similar to a dolphins, but wider and with a beak half way down their jaw and up the bridge of their nose.

Their beak only starts halfway down their jaw, allowing for their mouths to open extremely wide.

Males have head crests made of bone, females heads are smooth as a birds

Their head scathers are more thin and more plentiful than their bodies.

Eyes They have four eyes, two in the front as a predator would and two on the side as prey.

Their bodies are flat like lizards with necks almost as wide as their bodies. (similar to a bearded dragon lizard)

Along the sides of their bodies, beginning from their cheeks, along their sides, and down their hind legs is darker colored (almost black for most) thicker scathers pushing together to form a ridge (like the earth pushing together to make mountains)
The ridge on their face is more shallow than the sides of their bodies and has the highest peak at their toes

Omnivore
Scavenge off the land, eating whatever is available. Between times of hunting, they live through grain and grass. The grass they eat will only sustain them for so long, they need to hunt in order to keep themselves alive.

Depending on what they are hunting, they change their tactics. Whatever mode of travel the prey expects of the hunter, the use a different form to surprise them. If it is a dear that is roaming they will dive from the sky. If it is a Ghrepul drinking from a lake, they will launch from the water and bring it under. If it is a fish, they will dive as a bird when it comes close enough the surface or burrow from underneath them at a lakebed. They are not the greatest hunters when trying to capture prey without surprise, and have to move when the lifeforms have grown wise to their tricks.

Very similar to a lion’s pride, though more solitary. They do travel together, but keep great distances between them for better hunting. If they were to stay together, they prey would be more likely to spot them and run away. During the day they huddle to sleep together, but during night the troop separates.

Muzoval give birth to live young who are able to walk within the first few hours and swim, fly, and burrow within a week or two.

Muzoval live in community families. the ones who gave birth to the young are held to the same status as any other elder. The whole community takes care of all the young.

Muzoval originated from the rocky, tree dense, wide cliffs of Nekaso. Eventually they spilled onto the mainland, spreading all over. They thrive in whatever environment they greet, able to conquer earth, fire, sea, and sky. Their main concentration is near the island of Nekaso. Yet, as Humi have, they are scattered all over the world.

Bathing: Muzoval rub against trees to remove dead scathers and other debris. Bathing in water or sand does not do much due to their repellent oils.

Their population is enormous, some saying they number greater than humi. Before they were deemed rela, many thought of them as pests. Stealing livestock, overrunning entire cities when the move through them, and begging.

Muzoval are naturally nocturnal, but have changed to be awake during the hours most others are. They can’t keep it up for ever and spend the silent season giving into their natural state.

A group of muzoval is called a "rove"

In mozoval roves, every child or “young” sees their birth parents and any other “elder” in equivalence. Even young mozovals are trusting of their rove as any humi would be of their mother.

Their major Reln is Jyk

A creature which I could not fathom the reason for. To my strained eyes they were neither of land, sea, nor sky, but of all. Their shape was of the sea, but with wings to fly and legs to run, they were truly a monstrosity. It spoke to me, my mind spinning to remember how to speak myself. It welcomed me, fed me, and kept me. I will not forget that kindness, but I worry for those else who judge by what they see, as I first had.
— Weary traveler

They have no one major Reln but do have less Jyk and Bil.

These creatures were originally designed as griffins.