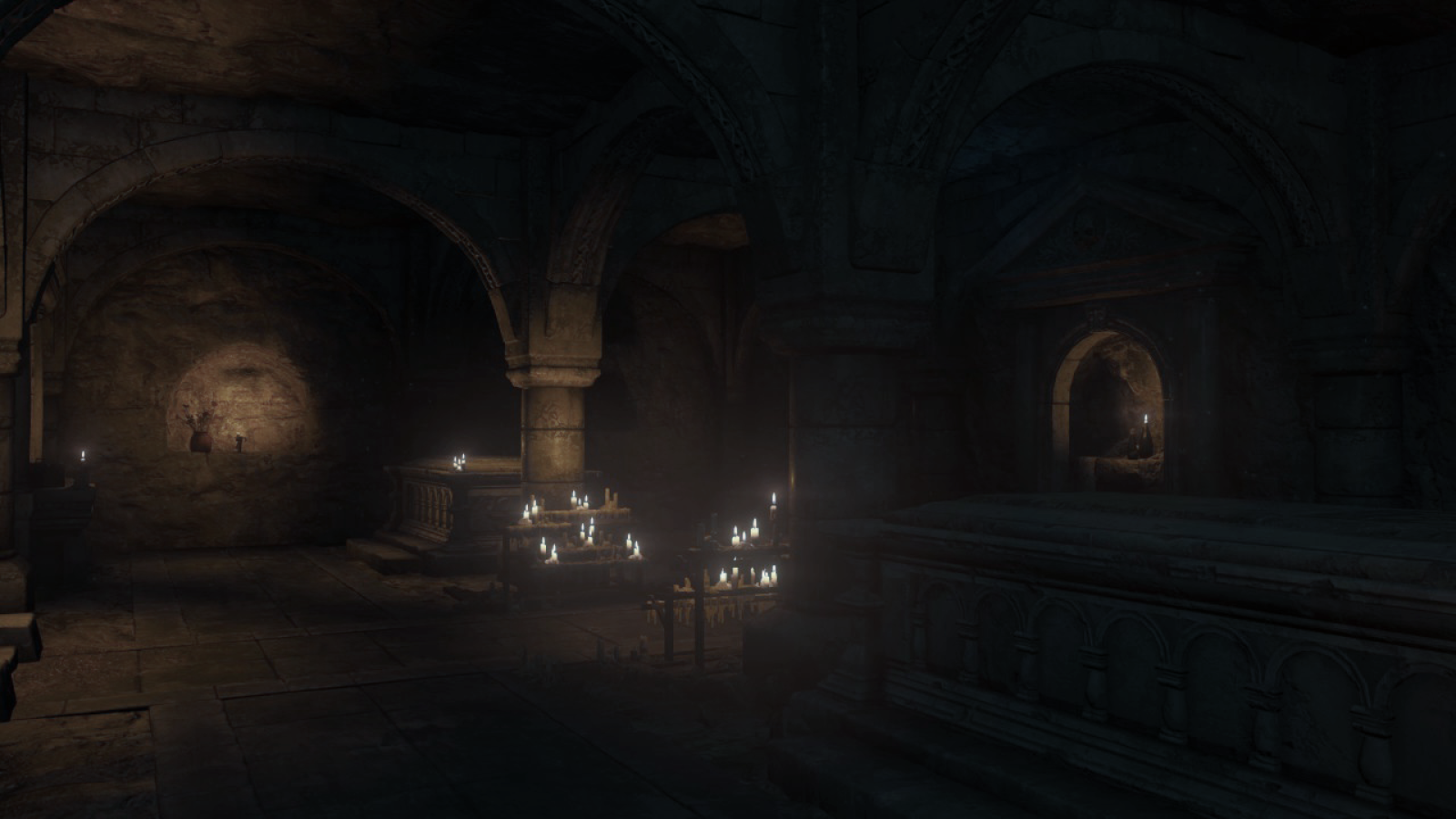 When the young princess Ashlyn Alarian was kidnapped from her parents at the tender age of 11, her parents spent countless years hoping that her captors would allow her to return - or that she would break free. The clock continued to tick on with nary a word, and they soon lost hope.   One thousand, one hundred and seventy-six years later, the princess - then a grown woman - would discover her true identity. Over a millennia of memories had been locked away by an unknown curse. Though she possessed no knowledge of her family, her descendants were able to help... and she was directed to the Aletheian Catacombs. There, she walked for seemingly endless miles, her feet leading themselves, until she came upon an ancient spiritual guardian who led her, in solemnity, to her own long-forgotten tomb. It lay next to those of her parents, just as ornately decorated, and a mournful feeling settled over her as she contemplated that she'd never speak with them again.   However, spurred on by the spirit, she was encouraged to see the belongings they'd left behind. Her attention was immediately snatched up by two letters, which she opened with caution.
Items
Two letters, and four rings
Significance
Personal
Related Persons
Ashlyn Alarian
Current Holder
Ashlyn Alarian
Owning Organization
The Aletheian Empire
Rarity
Unique

For my Dearest Ashlyn,   From the moment you were born, we loved you. My pregnancy was quite unwelcomed by many in the Empire, who questioned me for becoming pregnant during a war, but your father and I deemed it worth it. We wanted you, my child. When you opened sky-blue eyes and laughed up at us, your skin radiant, your touch warm and welcoming, we could do nothing but fall for you. We'd feared that you'd be born a human, losing the angelic heritage both your father and I hold dear, yet you displayed its hallmarks from your very first hour.   I took time away from my work as Empress to raise you; your father did similar. We wanted you to know us, to learn to love us, and we wanted to teach you so much - I showed you the way of the harp, the violin, the piano, and your father taught you how to trick the servants and tease your playmates. No matter what we taught, though, you were always quite independent - you snuck into the kitchens, once, taking a frying pan and using it against a boy who'd made one of your friends cry. You were only 4 years old at the time, and your father was incredibly proud. He swore he'd teach you how to use it properly when you were older, alongside other blades, and I'd always thought he meant when you'd reached adulthood until I walked in upon him putting you in a small suit of armour, looking like it belonged to a halfling, at age 7. You were so happy in it.   Whilst you spent time bonding with your father via the blades and via tricks, I tried to teach you some of the finesse of conversation and political situation at the time, about the wars and struggles we faced. It was not pleasant to put this on a child. But you were my child, and you needed to be prepared for the worst. You always stayed so positive and idealistic about it, swearing that you'd stop them for us - we had no idea what was coming.   It is my fault we lost you. It is my fault that the assassins were able to break in - our palace was recovering from a bout of illness, and we were short on guards, yet I didn't think to ensure your safety above heirlooms and artefacts. They took you, wounded your father and set off explosives. So many of our servants perished in the fires – your nursemaid, my ladies-in-waiting, our kitchen staff... it was horrible, and yet I had never felt more pain than realising that you were gone. Our Lady's blessing restored your father, but no magic could locate you. We turned to desperation, calling in wizardry and sorcery for assistance, to little avail.   It was after a year, soon after what would have been your 12th birthday, that I received a letter bearing the mark of Ordan. They had you. They included a picture – you were skinny, underfed, but alive. Your beautiful hair had been pulled back and they were keeping you in the clothes of a peasant, no sign of finery nor armour, but you weren't harmed. They demanded that we surrender our borderlands to them for your safe release and return. They wanted land closer to Gothadrun, allegedly. Giving them access to our borderless southern coast would have spelt war for our homeland, however. I couldn't risk it. Thousands of lives hung in the balance.   We declined, and never saw you again. It has been fifty long years since then, with not a sound. We crushed Ordan's attempt at an attack, and demanded information from those we captured – nothing. Fifty years. You have two siblings, now. Arthur and Celia. Arthur is taller, his build resembling your father's, but he favours debates and politics over the blade. His smile has aspects of yours, and his personality – oh, if you'd grown up together, you'd be almost inseparable. He's just as positive and driven as you always were, and as the elder of the two, will carry that flame on to lead the nation one day. Celia, meanwhile, is so unlike you – she's a scholar, intrigued by the world and desperate to know all there is, but fearful of brawls.   I will always love you, Ashlyn. You were my precious daughter and heiress, and it pains me greatly to write this—you deserved a life so much better than what you were given. I can only hope that you passed peacefully and without much pain.   Goodbye, my sweetest child.   Love,
Your mother,

Empress Angeline Aletheia of the Aletheian Empire
— The final goodbye of a heartbroken mother to her firstborn child.


The tears ran down Ashlyn's face in rivulets as she read her mother's words, the last ones she'd ever find directed towards her. A sense of finality and loss rushed over her as she realised just what she'd lost through no fault of her own, mixed with the pure elation she'd felt through reading something directly from her family for the first time in so long.   Ever unfaltering, though, she carefully lifted up the second letter - evidently from her father - and began reading.

I'm not one for words, unlike your mother. My place is on the battlefield. I trust that she's written enough for both of us by now, anyway.

You have been, and will remain, my angel. When things get tough, I think of you, your mother, your siblings, and it's enough to give hope, to help us fight past any breaking point. The Lady Sarenrae may have only blessed us with your presence for 11 years, but those years were wonderful, and I've missed you every day since.

I refuse to believe you're truly gone. We never saw your body, and Ordanians wouldn't kill a child. So, to you, my little angel, I leave this amulet. If you are miraculously alive, its function will reveal itself to you when the time is right. But even without the magic, it should remind you of us. Remind you of your real home. I can only hope that you'll find this and be able to use it one day.

I love you, Ashlyn. Goodbye, with the ever-burning hope that we'll meet again.
Your father,
King Consort Edward Alarian of the Aletheian Empire, High Commander and General of the Kingsguard
— A father's heartfelt farewell to his missing child, bearing the fruitless hope that she would return.


Wiping away her tears, and still filled with that conflicting combination of happiness and grief, she carefully looked at the other contents of her ever-empty tomb.   Inside lay an array of items, some of them clearly, and unsurprisingly, aged. An assortment of gowns, children's books, old toys and pink blankets. A goblet, an engraved frying pan (marked with her initials and clearly masterwork in quality), a child's wooden sword – and the locket her father's letter had mentioned, sitting upon a small pillow. She reverently picked it up, not wishing to disturb the rest.   As she turned to leave, the Keeper of the Graves - for that was the spirit's true title - halted her, handing her two ornate boxes, each containing two rings. The engagement and wedding rings of her parents, finally passed on to their eldest daughter.   In contemplative silence, she left her parents to their eternal rest, finally holding her inheritance.
Side Stories

This world uses trademarks and/or copyrights owned by Paizo Inc., which are used under Paizo's Community Use Policy. We are expressly prohibited from charging you to use or access this content. This world is not published, endorsed, or specifically approved by Paizo Inc. For more information about Paizo's Community Use Policy, please visit paizo.com/communityuse. For more information about Paizo Inc. and Paizo products, please visit paizo.com.
Article template
Item
World
Istralar
Category
Side Stories in The Saga of the Lost Ones
Author
Hanhula
Publication Date
3 Apr, 2020
Creation Date
14 Apr, 2018
Last Update Date
3 Aug, 2021
Visibility
Public
Views
1302
Favorites
10
Comments
1

What a beautiful and powerful set of letters. Hit me right in the feels :c Good job Hanhula!

Thank you! I'm glad I could break someone else's heart with this! <3