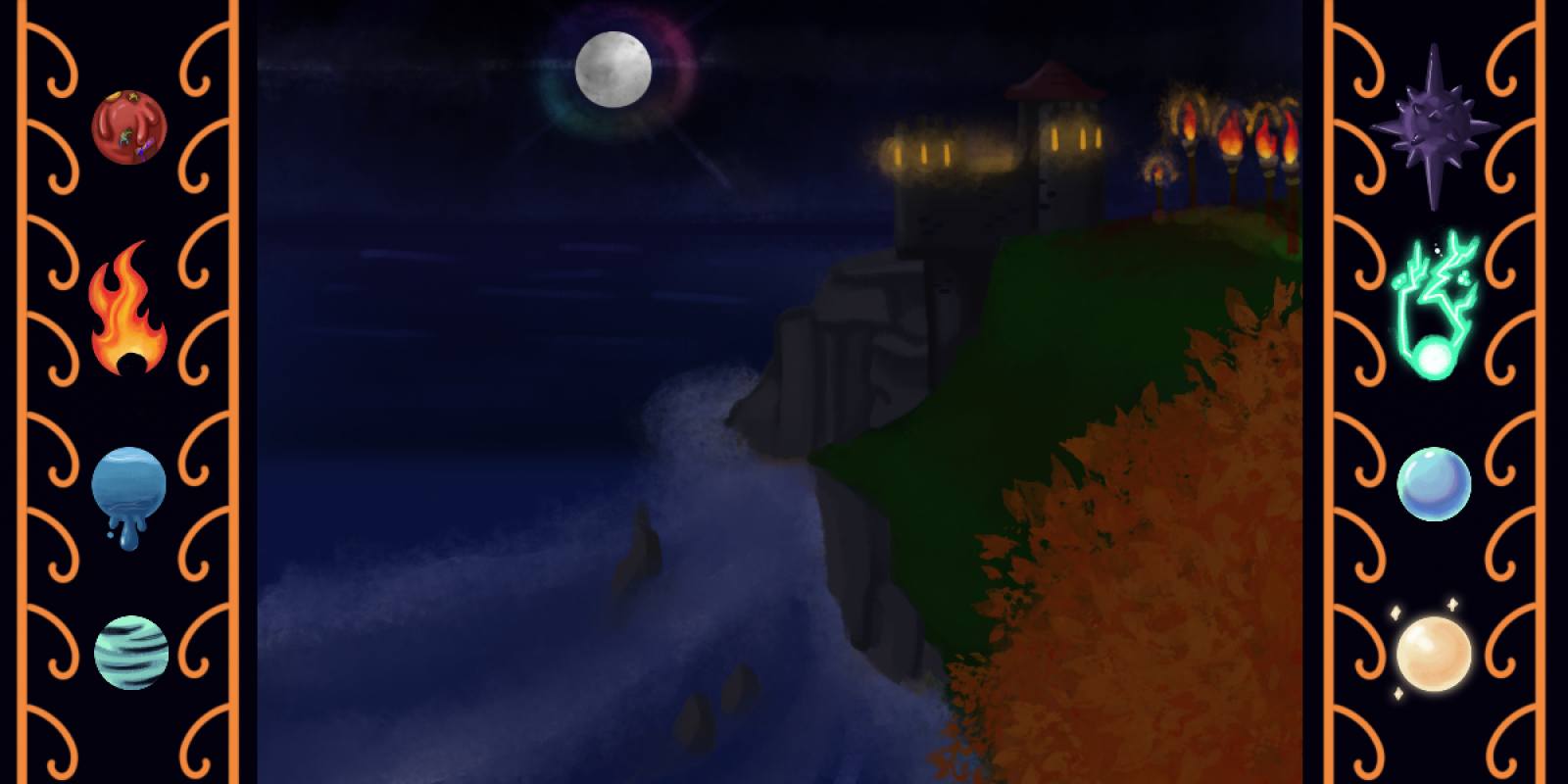 The War of Henor Cove

The town of Henor Cove was built in the shadow of an abandoned castle, which stood at the top of sea-side cliffs. A strange and unknown disease had spread to the villagers' old homes, and those who had fled their towns had decided on this new location, far away from the potential of infection.   They decided, once their town was built, that they could use the castle if any raids from the sea occurred, in order to defend the townsfolk. However, as time passed, residents realized that the castle grounds had remained pristine the entire time they had lived there. Rumors began to spread that the castle was not as abandoned as the founders had thought...   Fearful of offending the persons who lived there, the town left out offerings of peace. Day and night passed, and come morning, the gift had been taken. Slowly, and only on overcast days and at nighttime, did the strangers come to the town. They were charismatic and friendly, stating that their family and clan had lived here for years, but were content to share the land with the villagers as long as goods were exchanged.   An agreement was reached, but the strangers did not state what goods they desired - they merely asking to be welcomed and to come and go as they pleased. Some villagers were content with this, others began to whisper their concerns in the street:

"I don't think those castle folk are proper, you know... I think they might be somethin' more. I saw them teeth, they seemed far too bright, and holding eyes with them makes my head feel funny. I think they may be some kinda beast..."

The Disease That Started a War

Twilight Fever was a very unknown disease at the time of Henor Cove's founding. There were many superstitions that claimed those bitten would turn into the beasts themselves, and would be able to pass the disease onto others.   This fear, and sudden rise in Twilight Fever in regions surrounding Henor Cove created a powder keg of tension and racism that was due to explode at any moment.

Humans would typically attack during the day, attempting to storm the castle doors and set the castle ablaze. While the vampires were weaker and more sensitive during the day, they were still stronger, older and far more used to the land than their non-demon foes.
The only deaths were of the first vampire that came into Henor Cove's town to see if a peace talk could be arranged, and one who during the first night of the war, slaughtered over 500 humans in a heart-broken rage before being put down.

Due to being sensitive to the sunlight, the vampires mostly attacked at dusk and in the dead of night. It was common for torches' lights to suddenly be snuffed before vampires would feed or maul humans.
The ones that were fed on were typically killed by their own, due to fears that they would turn into vampires and attack their ex-allies. If they were not discovered before awakening they would go through the symptoms of Twilight Fever and would lash out at their allies. This allowed the vampires to let the humans of Henor Cove do most of the damage to themselves.

On the dawn of the third day of conflict, the 27th of Messiaire, the humans finally ran out of resources. Due to the strain on resources and the massive amount of wounded, the humans were forced to retreat from the front of the castle, back into town.

The fear of vampires coming into the town and ravaging the residence of Henor Cove caused the eventual abandonment of Henor Cove, and it is now a ghost town. It is rumored that the vampires eventually took over the town as well, though superstition keeps people away.

A sickness began to sweep through the town, along with panic. People believed that the creatures were the ones causing their townsfolk to become rabid, changing them into more vampires. The disease, known as Twilight Fever in current day, spread rapidly and without restraint. When confronted, the inhabitants of the castle gazed down upon the townsfolk.

"You said you would allow goods to be exchanged. We are exchanging: our protection for your blood. Are you not going to honor your deal?"

Horrified and angry, the humans of Henor Cove make a decision. They could not allow these beasts to live and continue causing suffering.

The Battle of Henor Cove took place on the grounds of the castle and the plains around the small town. The advantage of surrounding cliff-sides and stone walls gave the defenders a distinct advantage.

Due to the Messisaire weather typical to the region, the conditions were cold, rainy and windy. The attacking force was often buffeted by winds blowing off of the sea spray splashing over the cliffs and onto the battlefield.   In short, it was muddy, wet, and miserable.

Vampires win. They stay in their keep, though now they can't interact freely with the townsfolk. Neighbouring villages that had helped in the fight are reeling from the loss, as are Henor Cove's inhabitants.

Vampires are a hated race by people surrounding Henor Cove, as well as neighbouring towns. Though the vampires were defending themselves, they are considered horrible beasts for many years afterward, and it was common practise for vampires to hide their heritage when among humans.   Due to the slaughter of their allies and their own people, the town of Henor Cove is abandoned and is now a ghost town.

Answering: "Describe the events of the shortest war in your world’s history?"
Visit ChaosTearKitsune's Competition Page Check all other answers to this prompt Competition Homepage

Nice! A pretty generic vampire story, but told in a pretty good way. And your artwork. Honestly, you're good. ^^

Thank you! I appreciate the compliments.

In the end, the humans goofed and got slaughtered. The vampires don't get to play Scrabble Tuesday anymore. The end :D

Yep, Humans underestimated just how powerful their opponents were : p