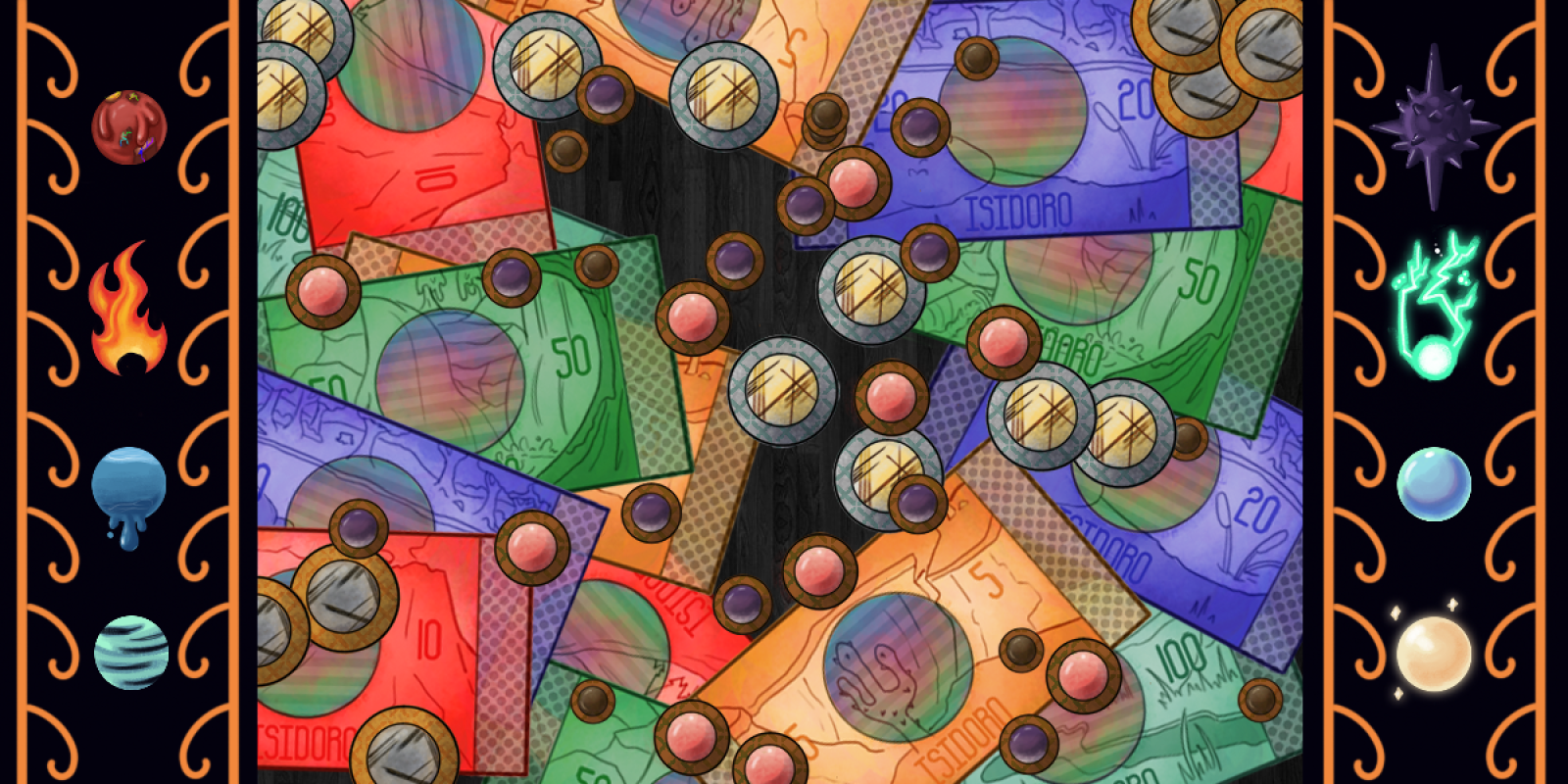 All the things I could do, If I had a little money

Haraamn (sometimes simplified to Haramn) is the term for the main bill and coin currency used in Isidoro. While it is the main modern currency, it is far from the only currency. Shellings and others have their uses, but Haraamn is the national currency and is the most wide spread.

When the first species of Isidoro began to do business with one another, goods that were beneficial to both parties simply exchanged hands. While not the Haraamn, the bartering and trading were the first steps toward a unified currency that had the same meaning to every being.

Before humans realized that dragons were sentient and were already trading things from their hoards with elves and other species, they would use crude coins of gold, copper and silver. After the disbandment of Knights of Valor and the hunting of dragons ceased, their method of payments became common: gems were placed on a value scale. This scale was applied to various goods like food, clothing, etc. and you could trade any variety of gemstones to reach that total.

Due to this, the mining industry boomed, and the harvesting and standardization of gemstones began; after a period of time, humans thought to combine their coin work with gemstones. This started with small smooth gemstones, strung with a bead and attached to a coin punched with various holes. The rarer stones were still carried in raw and polished forms. 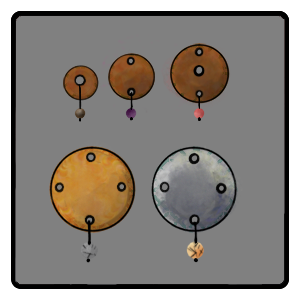 An example of prototype currency.

As technology and times changed, means of combining the stone with metal advanced. The coins are now a ring of the relevant metal, with the common stone welded inside the ring. Instead of carrying around these rarer gemstones, it was decided to create a type of currency to represent the rarer stones, resulting in the creation of the Paz, Rubes, Sapph, Ems, and Dia. Originally paper, but now a polymer material.

Numismatists and etymologists have debated among themselves what the root word was and how it evolved. Many believe that it's a butchering of the Draconic word Ha’rragm repeatedly changing as it was spoken over many generations of Silvertongue, Elven and Wildspeak. This caused a change in how the original word was perceived, and the lack of use of the root word, instead using a derivative.

Older individuals within dragon, fae and elven communities sometimes struggle with how the term has changed and become colloquial, due to the fact they may have used the correct pronunciation of Ha’rragm. It causes occasional communication error in generational gaps, but it's starting to become less often as the older generations die out. 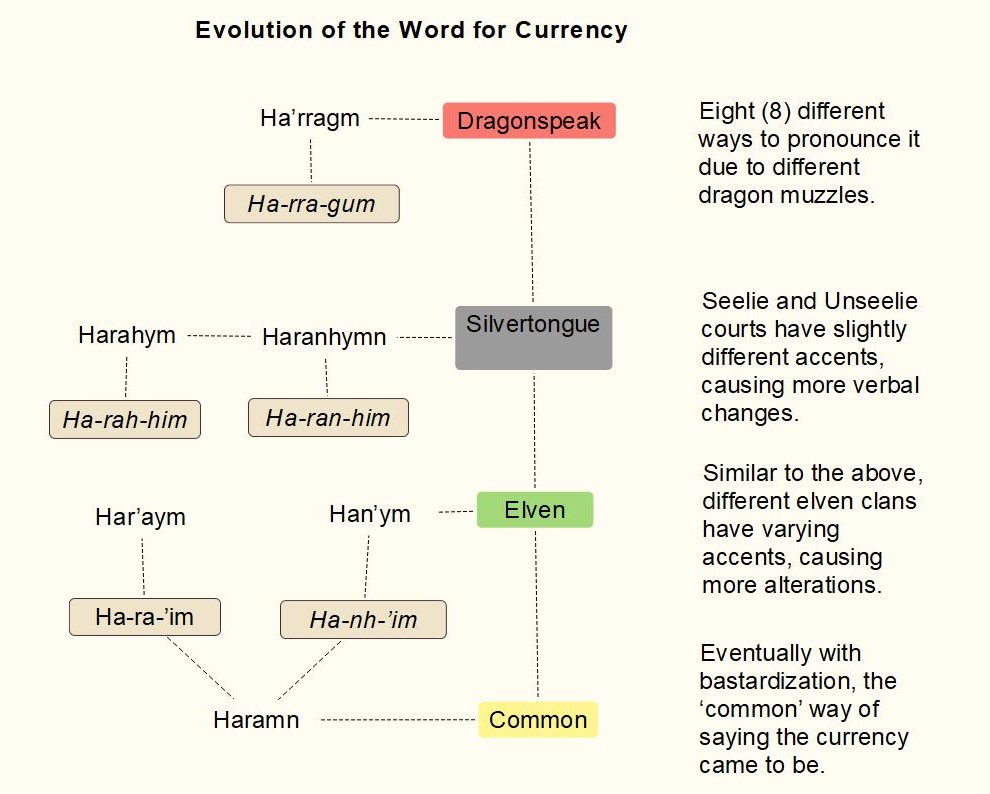 A chart showing the proposed breakdown of Dragonspeak work for 'currency' and how it evolved into its common name.

A quick explanation of the Haraamn currency at a glance.

Influences in the World

The current use of Haraamn in its coin and bill form is an abstraction of its original appearance and use. However, many of the older beings of Isidoro will claim that it's a welcome change.

"Listen, when I was younger I watched my grandparents lug around separate bags with carefully wrapped gemstones. I offered to carry them once and nearly fell on my face. I'm delighted to just carry some coins and some plastic. Does that make me a bad elf? Hell no! It makes me a smart one.

The benefits are many for the banks across Isidoro: rather than transporting hundreds of gemstones, a simple transaction of paper and coins would take place. Instead of having to travel with a wide array of items or heavy stones to the market, one could easily trade in this new lightweight currency.

Named in tribute to dragons, due to the fact they were the first to use this method of currency, but also heavily discriminated against and their riches stolen during the Dragon Hunts. This was considered an olive branch of sorts, and many dragons helped humans choose the currency's namesakes.

The cultural abbreviation of the Haraamn is HAR, and on the stock-market is occasionally labeled as IHAR. For beings who don't want to say Haraamn, 'Hars' or 'Har' is a typical replacement.

Over the years, the ways to counterfeit the Haraamn have become fewer and fewer. While it was easier in the past, there are at least 2 main anti-counterfeiting features, with others hidden from the public.

All of the coins of the Isidoro Mint. From Left to Right:Smo, Ame, Roos, Tourmal, and Rutil. 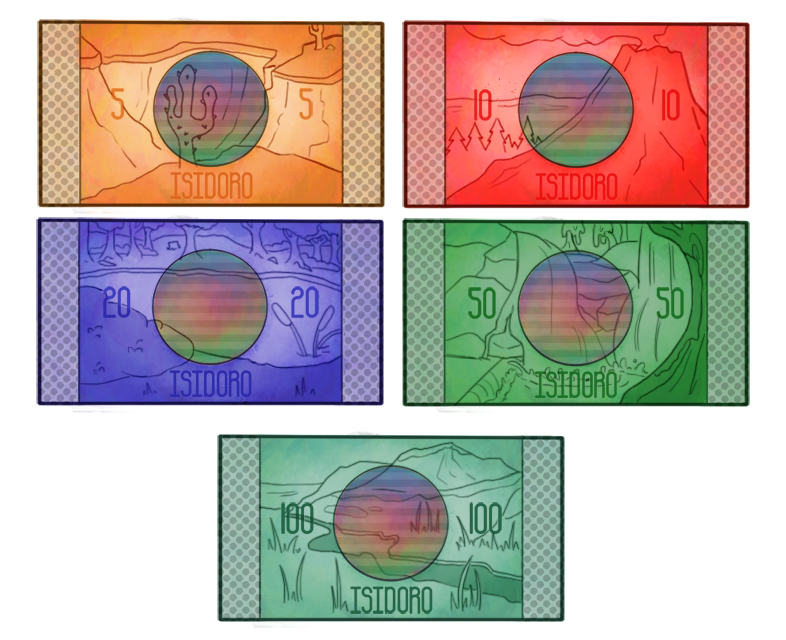 All of the Haraamn bills. From Left to Right, Top to Bottom: Paz, Rube, Saphh, Ems and Dia

That was a really cool article CTK! you really developed very nicely the history, development/progression, and the influence of this currency on your world.   Knowing little about your world I had to make some assumptions. For example, dragons are said to trade, but it's not specified that they do/did so in gems.

their method of payments became common.

I think it may help to point that they traded with gems (if that is a correct assumption).   It is also unclear why some dragon, fae, and elves feel uncomfortable pronouncing the word. What exactly does the word "Ha’rragm" mean in draconic? Did it also mean currency or something else? I would also really like to know more about dragons in your world, and about how are they co-existing with everyone else.   Finally, while I liked how you matched the artwork with the table (cool artwork btw), the picture does seem to be floating in a bit of "nothingness". I would personally prefer it if you switched some of the text from the main section into the sidebar to fill the spaces before and after, but I do think that's a pretty personal formatting preference.   Overall: kudos for developing a currency that feels legit!

Thank you so much; yes, I need to clarify that dragons originally traded with gems! Older ones know of the actual word dragons used for 'money' and that the current word is a bit muddled from the original. It's like the 'soda, pop, or soda pop' kind of term difference, I suppose?   My dragons have some articles out right now, but I'll have to work on it! I could put some HR's underneath and ontop and try to line it up with the table a little more.   But thank you so much for the in-depth comment, I will go over these edits soon! : D