The Kingdom of Gorlovoye is a dwarven country in the southern part of the Gardemoor continent. It borders Gardelinden to the west, Sadinfroe and the Nairam mountains to the north, and Ortal to the east. It was founded as a treaty state by gardian and ortalian governments as a response to the threat of goblin hordes.

The gorlovoyan motto is "Fuck off!" and was originally used as a slur towards goblins, though it is now widely used by everyone towards anyone.

Founded shortly after the emerge of the dwarves in Ortal, the gardian county of Gorlov was turned over to the Reavers in exchange for keeping the goblin hordes at bay. The reavers reestablished this county as a kingdom. After a few swift campaigns, the goblins were pushed north both under and over ground, and are now to be kept in the wastelands, a barren land north in Gorlovoye surrounded by the Nairam Mountains. In the country's entire two decade old history, goblin hordes have only managed to break out of the borders twice, both times moving underground to the ortalian barony of Blackhills.

It is said that throughout history, a horde emerges in the wastelands every year. If a horde is discovered in the south of the wastes, or is spotted moving south, the entire country gets locked down. Larger cities, like the capital Abelein, or Triffeld, stops all non-military transports and closes their gates. The surrounding villages are given extra soldiers to bolster their guards, and evacuation protocols to the nearest city is taught to all inhabitants. One or more reavers are usually sent to each major city during lockdowns.

In smaller cities and towns, gates are closed, guards are bolstered by the military, and people in the countrysides are evacuated. It is tradition for these people to trap every building, both to defend against would-be thieves, and in hopes of taking out a few goblins should the horde come to them.

Gorlovoye is a kingdom, and as such they have a king. The king is elected amongst the elders of the Reavers, and the title is held until abdication or death. Elections are held in the capital, and any member in the reaver organization can vote. Day-to-day business is managed by high ranking officers that are elected amongst the reavers in each respective region. The exception to this is the city Triffeld, which is governed by the lord of Red Willow, Adalbert, due to popular demand.

While technically being governed by a military organization, Gorlovoye has no standing military. The elite reavers mostly keep to the wastelands where the goblin threat is, and so the southern part of the country is supplied footsoldiers from Ortal to work as guards in the cities, or to man their many borderforts. These ortalian soldiers are more often than not members of Blackhills' Pitch Black Brigade.

Scenery from the Gorlovoye Wastelands 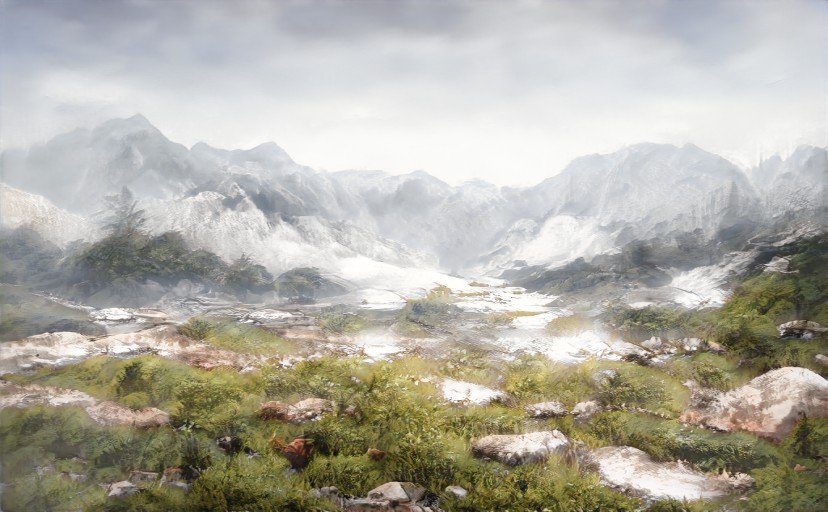 A map centered around the country's most prominent river,  Sygyt.