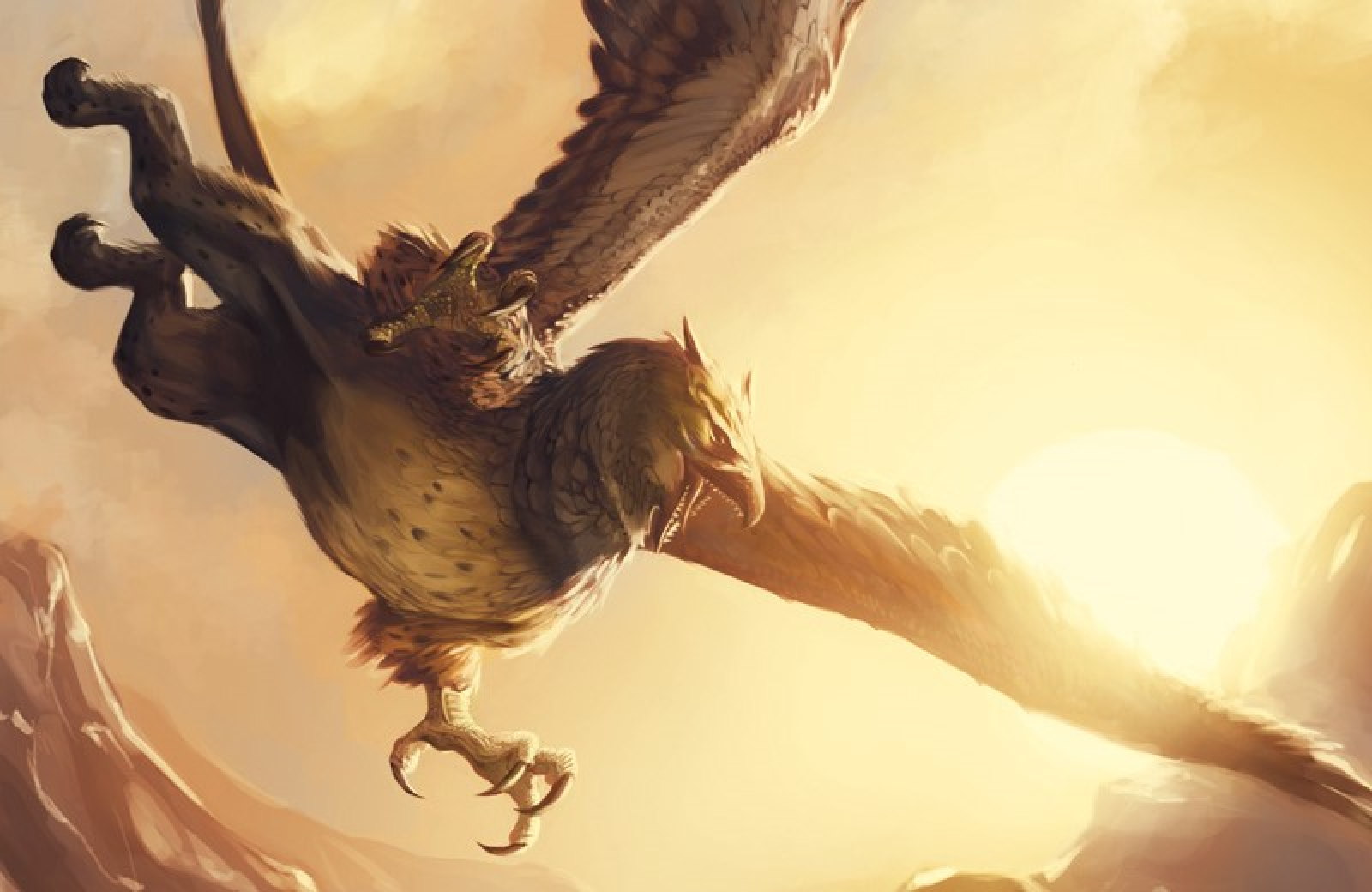 The Modain Races of the Gryphon Runs

There is nothing that gets the blood rushing quite like the screams of a hundred hungry gryphons swooping down on you! No better way to live. No better way to die!
— Eiga, Holder of Five Black Feathers

The Gryphon Runs have been plagued by those titular beasts for as long as anyone can remember. The town, which occupies both the top and bottom of a massive cliff, must frequently deal with gryphon attacks, especially around the lifts that ferry goods and people between the upper and lower sections. Legend says that these attacks were once far worse than they are now, however, and the tale of how Modain the Mad saved the town was the inspiration for the annual races.

Many years ago, when the town was beginning to expand, the people began the construction of the lifts. It was a mighty undertaking of engineering made all the more difficult and dangerous from the constant gryphon attacks. The Gryphon King, an enormous beast with pitch-black feathers and gleaming red eyes, led assault after assault.   It was at this time that Modain, a simple laborer on the lifts, made a plan to lead the gryphons away long enough for the work to be finished. He took raw meat and the blood of the winged horses, the gryphon's most hated enemy, and covered his horse with the gore. With a whooping cry, Modain galloped into the savannah and led the gryphons away.   It is at this point that the legend gets muddy. Some say Modain managed to shake loose of the gryphon horde by dismounting his horse and slapping it on the rear. He then supposedly snuck back to town and lived to pull this trick several more times. Others say that he met his end at the black steel talons of the Gryphon King. Still, others claim that Modain rides through the deserts and badlands to this day, the emaciated black beast still following behind him.   In any case, the people of the Gryphon Runs created the Modain Races to honor his bravery and his memory. It has become a point of pride for the local clans to compete in the races, and many in the area see it as a rite of passage.

The races are held once every year. Large numbers of riders paint intricate patterns on their steeds with winged horse blood and drape meat over their saddles. As the sun rises, the riders let loose a thunderous battle cry and stampede into the grasslands and canyons at the base of the cliffs. The main objective is to get as far out as you can before abandoning your mount and running back to the town, all without being eaten by the swarming gryphons. 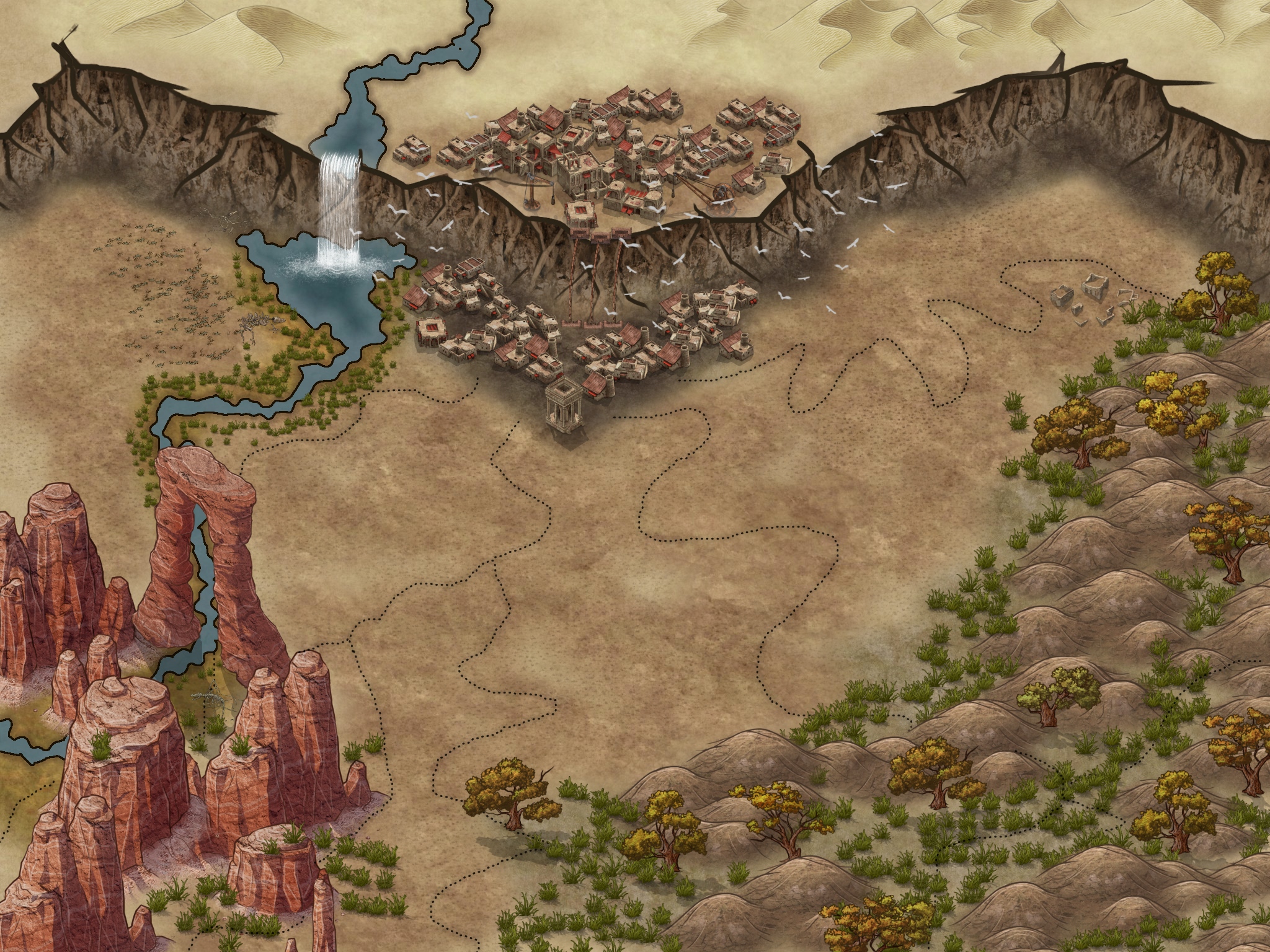 Paths of the Race by Created on Inkarnate
Many riders are lost every year, either to the gryphons themselves, falling from their horses, or literally getting lost in the canyons, but for those who return great honor awaits them. For the first rider back, a prize of a single black gryphon feather is awarded. Subsequent riders are awarded the more common colored feathers. Winners wear their prize in their hair, on their belts, or on their wrists. The most celebrated riders have multiple feathers displayed proudly as headdresses or mantles. After the races, great feasts are held and the riders are held in the place of honor.   To outsiders, this competition can be seen as madness, but locals are steadfast in their belief that the races honor the very spirit of the Gryphon Runs and of Modain the Mad.
Cover art by Jon Bosco

It is most common for gryphons to have feathers of gold, red, or brown. Occasionally, however, a gryphon will be born with the ebon feathers of that great ancestor, the Gryphon King. These feathers are highly prized by the people of the Gryphon Runs and many will risk life and limb to gather the fallen feathers of these great beasts. Though the birth of a black gryphon can be considered an ill omen, the younger generations of the area hold no such superstition.
Ior

Images: Artwork (C) 2020-2021 by Kayla Perisho-Denley, unless otherwise stated. All rights reserved. Stock art and cover images from Pexels is licensed as Royalty-Free (RF) without attribution except where stated otherwise. Some cover images (C) 2020-2021 Kayla Perisho-Denley
This is a work of fiction. Unless otherwise indicated, all the names, characters, businesses, places, events and incidents in this article are either the product of the author’s imagination or used in a fictitious manner. Any resemblance to actual persons, living or dead, or actual events is purely coincidental.
(this World is a work in progress, please ignore the scaffolding as we construct it)
Cover image: by Jon Bosco
Article template
Tradition / Ritual
World
Hallowed Legacy
Category
Ior
Author
Ellysium
Publication Date
16 Feb, 2018
Creation Date
8 Feb, 2018
Last Update Date
8 May, 2022
Visibility
Public
Views
1054
Favorites
16
Comments
4
Work In Progress 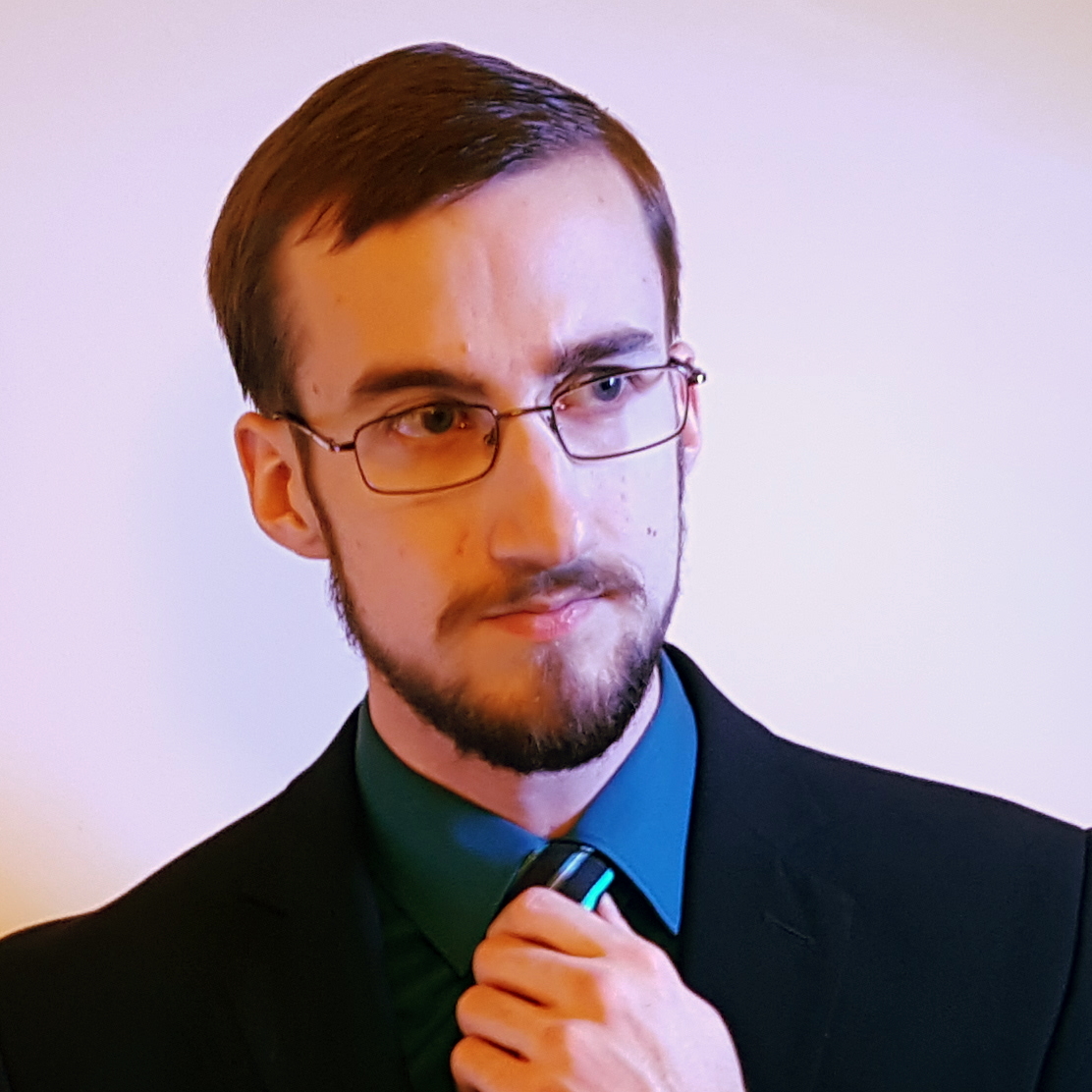 Are riders often lost to Gryphons or just starvation/exhaustion before they make it back to town? It's not clear whether the current races actually involve Gryphons chasing the contestants.

Mostly to the gryphons, yes. The Gryphon Runs are still plagued by the creatures who roost on the cliffs nearby. In fact, the modern gryphons have learned that the races are good for a decent meal, and they will actually swarm the area when they see the races are starting. Occasionally riders will get lost in the canyons and starve or will die of exposure if they get injured and can't get back. Thanks for the comment!

I like that the race is purely for esteem. Are there any other rituals around the race? Something that the racers family and friends might do to give them luck?

I think they would probably use specific patterns or runes as they paint the horses. Probably the families would help the racers paint the horses. The race is a sort of coming of age milestone, as young people of the Gryphon Runs are considered truly adults the first year they complete the race, and it's an honorable death if they die in the race.

This race sounds like reckless fun. I had a minor question for visualization purposes: do the racers run off away from the town at the bottom of the cliff, the top, or both?

From the bottom. I should have mentioned that, lol ^^; They keep most of the horses in the lower section, and it's not the best idea to try and move animals up and down the lifts, as you can imagine. So yes, they all set out into the badlands from the bottom, with the gryphons swooping down on them from the cliffs.

Thanks for the clarification! Imagining the gryphons swooping down makes it even more dramatic. ^_^

Very nice article! I love the story :D I'm just wondering about the numbers of horses that are killed every year since the death of all the horses seem to be part of the race. That must be rather expensive for the city XD

Horses are one of the most abundant livestock animals in the area, so the value of the horses probably doesn't factor in. I'm sure outsiders would have that same thought, though. Some horse I would think could get away if they are able to get into the canyons. They probably don't return to the town though, and probably join wild herds.