Maly Brontes (a.k.a. Lady of the Vault)

Maly came to Riddleport several years ago, a member of a band of adventurers. The party had cleared out an orc encampment that had been overrun with demons. Despite her contributions, the party had always seemed to come up with an excuse not to give her an even cut of their spoils. When they left Riddleport, Maly remained behind. However, before leaving the group she liberated a few of the demonic totems from the party loot without the others knowing. She purchased the quirky magical shop, renamed it Maly's Wondrous Vault, and used the totems as protectors.   Within the walls of the Vault, Maly raised her daughter Anen. Being a Magus herself, Maly recognized the innate arcane powers that began to manifest in her daughter. She looked forward to watching Anen blossom into a strong woman who would not be mistreated like she had been mistreated.   Sadly that would not come to pass. One night, the voidtouched assassin Matan'sa attempted to kidnap Maly and Anen. The totems that protected the Vault empowered Maly. Engrossed in demonic power, Maly tried to fight him off. Matan'sa killed her and knocked Anen unconscious.   After a week on the run, Anen was rescued by Kwava and taken to Crying Leaf. They returned weeks later and claimed Maly's body. She was cremated and her ashes were forged into a necklace that Anen wears to this day. In this sense, Maly was able to remain with her daughter to watch her grow.

Maly was short, with blonde hair and blue eyes. She was a stout, curvy woman who did not shy away from her physical gifts. Despite her stature, she also appeared to be deceptively strong. Often she had been seen loading and unloading carts of goods by herself, as well as displaying the balance of various sheathed weapons from daggers to greatswords.

Maly came to Riddleport with a group of adventurers. They had cleared out an orc encampment that had been overrun with demons. The group had refused to give her an even cut of the treasure, being the only woman in the group as well as the most capable in combat. When they left town, she stayed to make her own fortune. She treats others in town fairly, as long as they treat her respectfully.

Maly lived on the second floor of the Vault with her ten-year-old daughter, Anen. 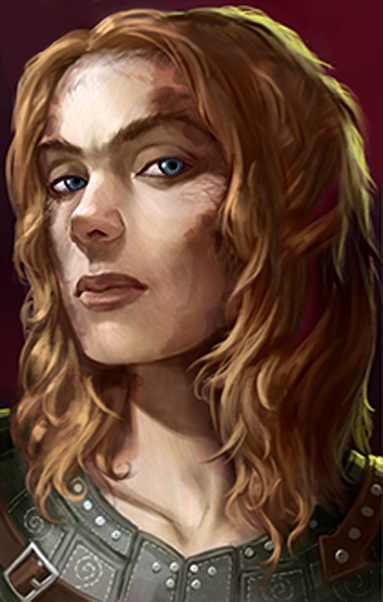