England is the wealthiest and most populous realm in Britain. England has a strong monarchy which dominates the whole kingdom. Most large feudal estates are scattered to prevent individual lords dominating particular regions, and barons lack the power to challenge the crown individually.

England may be said to have three forms of government: the feudal state, the royal bureaucracy and the church hierarchy. All three interweave and are sometimes in conflict as feudal lands are granted to religious institutions, who then owe feudal dues; bureaucrats are rewarded with church positions; religious appointees consider their conscience and their duty, and lords consider their immortal soul, their duties, and their rights.   The King of England heads both the feudal government and the royal bureaucracy. The church heirarchy is technically independent of royal control, answering only to the Pope, but in practice the king exercixses considerable influence over clerical appointments. A dispute over clerical independence between King Henry II and Archbishop Thomas Becket led to the murder of Becket in 1170, but even this heinous act and King Henry's public penance did little to stop the king deciding who should be appointed to senior positions.

Technically only the king owns land outright, in full sovereign title. Everyone else holds land either directly from the king or from an intermediary as vassals in return for their loyalty, advice and service. Such landholdings are inheritable.   First in dignity among the king's vassals are the earls, a rank equivalent to the continental count. In 1200 AD there were 16 of them, each associated with a provincial county from which they were entitled to 1/3 of royal revenues. The earls were generally the most powerful and infuential members of the baronage.   The baronage is rather more amorphous. In one sense, barons are those vassals who hold their lands by baronial tenure (per baroniam), for which they paid an annual relief of £100. There are around 200 of these. But in another sense, barons hold large estates whether or not they hold by baronial tenure. There are a further 72 large estates of this kind. Some of these baronies are vacant and held or administered by the crown or its appointee, and some barons held more than one large estate. A good estimate os that there are around 200 nobles recognised as barons around 1200 AD. These nobles held multiple knight's fees, some of which they kept as personal holdings, and others of which they subinfeudated to vassals of their own.   Earls, barons and their families are considered noble. Below them ranks the gentry - between 4,500 and 5,000 knightly families who hold smaller estates of up to 5 knight's fees, either from a baron or directly from the king. While knights technically hold their lands by military service, it is becoming increasingly common for them to pay a tax named scutage, allowing their liege to hire a landless knight to serve in their place. At the same time the crown increasingly expects members of the gentry to monitor or administer aspects of provincial government.   Each level of the feudal government has a court, presided over by the lord or his representative, to ensure feudal obligations are being fulfilled and settle differences between vassals. A manor has a hallmoot, a barony a court, all the way up to the royal court.

The chief minister of the royal bureacracy is the Chief Justiciar, who acts as viceroy in the king's absence as well as heading the judiciary. The two main administrative departments of the royal bureacracy are the Chancery, headed by the Chancellor; the Exchequer, under the Treasurer. These two departments are based in Winchester. The principal officers of the king's household might also be considered part of the bureaucracy: the steward; the butler; and the constable and marshal, who acts as quartermasters and commanders of the army.

England is divided into counties, each run by a sheriff, who presides over the county court, executes writs, guards prisoners, investigates crimes and, most importantly, collects rents, fines, taxes and other royal revenues.   Royal justice is overseen by itinerant justices who travel the reaches of the kingdom on set circuits.

See History of England for a timeline of events.   England emerged as a political unit and sovereign state as wars against Danish and Norse invaders led to the unification of the Anglo-Saxon kingdoms of Wessex, Mercia, Northumbria, East Anglia and several minor kingdoms and provinces after Aethelstan of the House of Wessex, King of the Anglo-Saxons, defeated the Danish Kingdom of York and annexed Northumbria. The Kings of Alba, Strathclyde and Deheubarth recognised Aethelstan as King of the English on 12 July 927 AD.   A second wave of Danish invations in the early 11th century resulted in England becoming part of Cnut the Great's Danish empire from 1016 to 1042, but the line of Aethelstan was restored in the Norman-raised Edward the Confessor. His death in 1066 sparked the Norman Conquest of England. The descendants of William the Conqueror rule England to this day. 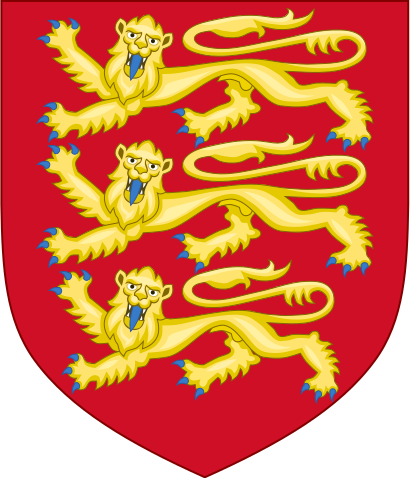