Fabula Mundi is a world of historical fantasy, the historical Middle Ages flavoured by the stories, legends and folktales of the period. It is a world where knights fight, monks pray and peasants toil, while necromancers conduct divinations and revenants haunt the night.

Fabula Mundi is more than a game world. It's a resource for historical gamers, the result of more than 30 years of historical and archaeological research into the period. Contact me if you wish to use articles for your own website or project. In general, I'm happy for people to use articles non-commercially if they provide a link and attribution. For commercial use, I will expect payment as well as attribution. But in either case, this is my work and you need permission.

Most of my campaigns focus on medieval Europe, simply because it is the region I'm most familiar with. Europe of Fabula Mundi is a diverse place, inspired by the growing number of modern academic studies showing its historical counterpart was far more diverse in ethnicity, sexual orientation, gender identity and gender roles than previously acknowledged.

The balance of history to medieval fantasy varies from campaign to campaign. Some campaigns may be strictly historical, while others draw much more heavily on medieval legends or belief in the supernatural.

Prospective players should read Welcome to Fabula Mundi for an overview of the approach. The current campaigns are Lionheart Lost, set in England in the early 1190s; and An Ill Wind, a mini-campaign set at the Christmas Court of King Henry II at Chinon in 1172.

Now preye I to hem alle that herkne thai litel tretys or rede, that if ther be any thyng in it that liketh hem, that therof they thanken oure Lord Jesu Crist, of whom procedeth al wit and al goodnesse. And if ther be any thyng that displese hem, I preye hem also that they arrette it to the defaute of myn unkonnynge, and nat to my wyl, that wolde ful fayn have seyd bettre, if I hadde had konnynge.   Geoffrey Chaucer, Retraction, The Canterbury Tales

Modernisation: I pray that all those who read or pay attention to this little treatise, if they find anything they like, they thank for it our Lord Jesus Christ, from whom all wit and goodness derive. And if there is anything that displeases them, I pray they attribute it to my lack of knowledge and not to my will, which would happily have said it better if I had had the knowledge. 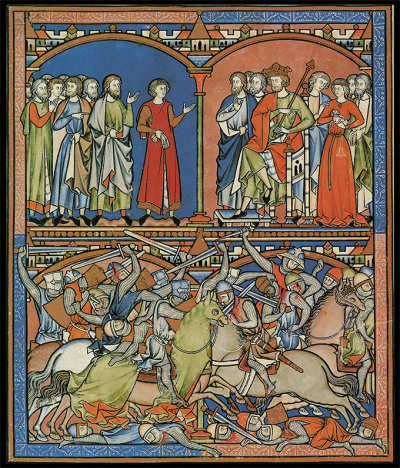