A man's reach should exceed his grasp, or what is heaven for?

A mountain of seemingly insurmountable size rises intently to an unimaginable height, disappearing above the clouds. You can see a mesmerizing silver sea, glinting in the twilight of the titanic rock. Rolling hills and endless fields of farmland cover the colorful ground that precedes the mountain as angelic beings in golden breastplates fly overhead joyfully patrolling the skies. The beauty of the landscape is euphoric and inviting.


The Above represents the welcoming, generous, caring nature of its creator and inhabitants. Native creatures, such as Archons, Angels and Celestials, make up a majority of the denizens but many settlers are those who seek atonement and enlightenment by climbing to the top of Zion Mountain by way of Honor's Path. Only those with the purest dedication to lawfulness and honor are ever able to reach Zion Mountain's peak and speak with the Winged Lion Rezmir.   The great Zion Mountain stands infinitely tall over the equally endless Sea of Silver. Countless villages, citadels and cities dot the landscape, appearing on islands in the shimmering aquatic expanse and lower regions of the mountain. A bastion of civilization; The Above is a physical and spiritual manifestation of the Ideal of Honor and as such inhabitants are honest, helpful and trusting. Evil would not dare show itself here, or face the lion's roar.

The Above began following a great battle and sacrifice by the creator Al'Madoon in thwarting the Fallen Elf Elturel, freeing Erenel from tyranny. When Al'Madoon willingly gave the life of his being, an explosion, full of celestial force and in close proximity with Elturel, ripped open two planes. One plane formed from the love Al’Madoon has for his creations and another from the hate and greed shown in Elturel. Citizens of Erenel would call these planes “The Above” and "The Below". 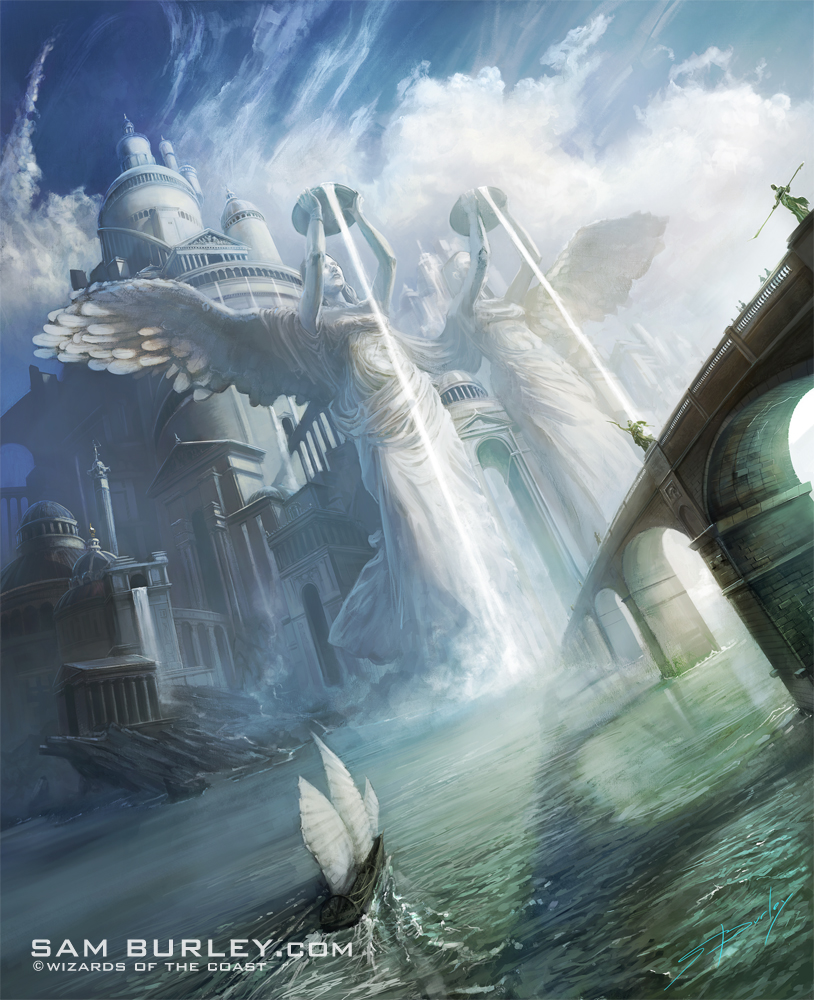 by Sam Burley
Stretching endlessly in every direction, the freshwater sea of holy water provides for and protects The Above from demonic invasion. It is common to see boats sailing under the starlight and various aquatic creatures moving in the depths. When one steps into The Above they are generally placed on the coast with their backs to the sea.

The largest settlement on the plane, Harmony's Rest is a peaceful city arranged in an orderly grid with streets paved in silver. Buildings are typically built from platinum, silver or mithril ore and rise upward instead of outward reaching up to Zion Mountain.   Passage to Harmony's Rest can be found with ease and celestial guardians will let anyone enter as long as they have no intent to disrupt the peace. The natural truth aura blanketing The Above allows for the guardians to easily uncover threats and merchants to sell with purpose. Creatures from across the planes come here to buy and sell various goods with the understanding that swindling is next to impossible.

Enlightenment is achievable by anyone willingly to make the journey up Zion Mountain. The path begins at Zion's base past an ornate stone archway where marble steps rise lit by Lantern Archons that float in the air and accompany travelers. Along Honor's Path several trials will need to be completed to continue ascending towards Rezmir's palace in the clouds. Trials gain difficulty the higher one climbs resulting in few to every reach Zion's peak. The path may be climbed as many times as a traveler wishes for the Lantern Archons will always offer aid.

An extremely rare metal that when forged into a weapon can hurt immortals such as gods or vicious monsters and their offspring. Usually found from mining veins in The Above. Artifacts of celestial bronze are known to emit a faint golden glow.

The very nature of Lawfulness and Light infuses the plane and all that exist within, including travelers. This effect fills the plane with the effects of zone of truth. Upon arrival and every 24-hours, a visitor must make a DC10 Charisma saving throw, or be subject to the spell's effect. This DC increases by 2 every 24-hours on the plane. 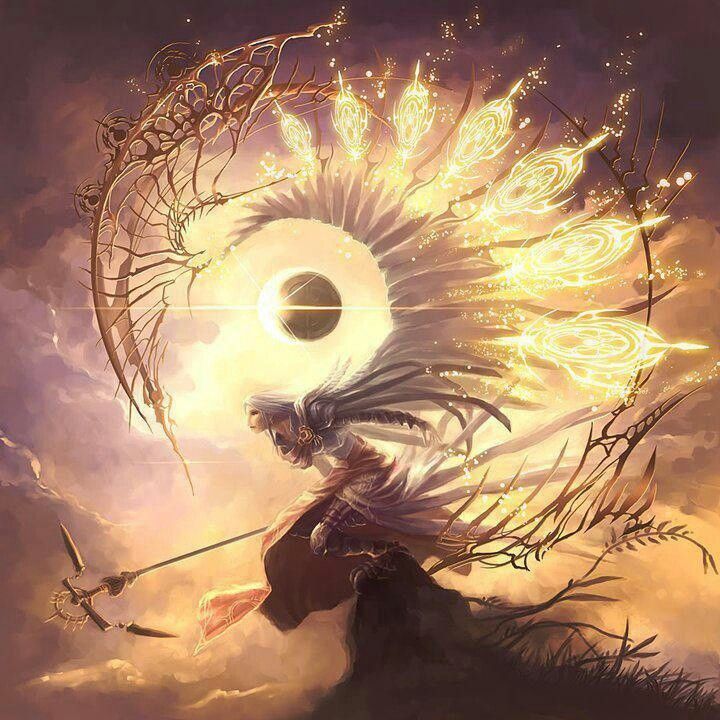 While life is diverse, there are a few constants across The Above. All citizens worship the deities who reside here and have been infused with the Law and Honor the plane manifests from that they are unable to tell deliberate lies. When speaking with a citizen, they automatically assume you're speaking truth unless it is blatantly obvious.   Angels and Archons generally enforce order as needed and non-celestial creatures will most likely report any behavior deemed dishonorable. Fortunately, justice is often meted in a way to maximize satisfaction and fairness even if it involves someone not native to The Above. If a traveler wrongs a citizen they may have to pay a fine as restitution or even face banishment. There have been some cases where honor of both parties demand combat and a duel was allowed. Such cases are rare and not to the death.

Kalator, Father of the Forge

Rezmir, of Light and Law

Powerful great sword wielded by the fallen angel who shared the weapon's name.

Incredible and inspiring. I'm quite reminded of the depiction of 'Heaven' I need to write for my world, and I think you captured it perfectly.   An amazing choice of pictures.