There are times when a sorcerer needs a quick way to get themselves out of trouble, or in some situations cause trouble. For the "water" related bloodborn, that tends to be the 'River Whip'.

Despite the name, it is not a whip made of river water. Quite the contrary. It is a whip made of water that is constantly in motion, flowing like a river in the hands of the sorcerer that created it.


It's quite impressive. It looks relatively odd being a whip made of flowing water. There have been more than a few that don't take it as a serious threat.

That is until they're hit by it and whatever arcane surprise the sorcerer had in store.
— Stefanos Vel-Barboza, Seskyalii skald alchemist


While active, a river whip can be used to lash and whip at a foe or target, dispensing a pint of water each time. This can be used to extinguish fires, or splash into the face of an opponent to momentarily blind them.

The more inventive among the bloodborn have even deduced how to channel a few of their bloodborn powers through the whip, using it as an extension of themselves.


This is common sense, really. Sorcerers, no matter their bloodline, are tied to one arcana aspect or another through their life force. Since the whip is created through that connection, the whip really is part of them. Though, I've always wondered, what if you cut the whip in half? Would it hurt? Or the arcane effect just evaporate?
— Stefanos Vel-Barboza, Seskyalii skald alchemist


This spell allows a sorcerer with a "water" related bloodline to create a whip, appropriately sized for the sorcerer, made of fresh water. The water in the whip is constantly in motion, ever flowing and reacting to the sorcerer's arcane powers.
Like a regular whip, this arcane whip of water is treated as a melee weapon with a 15 foot reach. Also, it can be used against foes anywhere within the sorcerer's reach! This means attacks from this whip are 'touch' attacks, so a sorcerer may channel their Bloodline 'touch' based powers through the whip as a bonus effect.
The river whip itself deals 1d3 + the sorcerer's Charisma bonus in damage to a target. This damage is nonlethal, and the target struck is doused with 1 pint of water.
In addition if the target is on fire, or is a being that produces fire, it must make a Save vs Fortitude against 12 + the sorcerer's Charisma Bonus. If the target fails their saving throw, the fire is extinguished or lessened depending on the source.

After the spell has successfully hit a target a number of times equal to the level of the sorcerer, the magic of the whip dissipates and the water is released. The water itself that forms the whip is identical to what is produced by the spell create water.

Now! Even though this is a whip made of water, it is still a whip. Therefore the special maneuvers of 'trip' and 'disarm' can be attempted with this spell. In addition, the whip may be used to splash water into the eyes of a foe, causing them to be blinded for one combat round.

Also, this whip of water may only be used by the sorcerer that conjured it. If anyone else attempts to use it, the magic will vanish and the water will dissipate. Likewise, if a foe attacks the whip and severs it, the spell loses one use of the river whip being active.

A whip made of constantly flowing water of an appropriate size and length for the sorcerer. 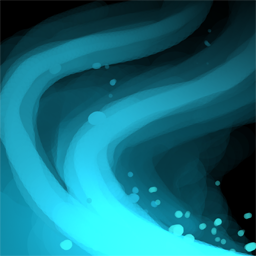 Gestures & Ritual
The requirements are that the sorcerer brings both fists together in front of them to focus the arcane energy. On pulling their fists away from each other, they 'draw' out the flowing arcane water. It is up to the sorcerer which hand is wielding the conjured water whip.

Some sorcerers whisper the Ancient's name for the effect...

Author's Note: This is a homebrew River Whip spell that is heavily inspired by Pathfinder 1e spell of the same name. It was altered to provide a 'thematic' version of a 'stormborn sorcerer' that would fit the story of the Elohey world.

I has a question fer his GMlyness. If I were to say use Shocking Grasp which is a touch based attack in conjuction with with a River Whip as described by yerself, somet'ing this Stormborn can do, does the shock last as long as the whip? Or, is it the one shot attack duration of the Shocking Grasp spell and then it goes back to being just a River Whip for the other 5 attacks?

Oh, well, Young Sorcerer, forcing magics together is a tricky thing. The magic doesn't like to be meddled with, as you well know!   So in this case, if you were able to use your Will-Working to meld them ... which may or may not always work (remember its a Save vs Will to be able to merge them ) ... the Shocking River Whip would only last as long as the Shocking Grasp! It would not go back to being a River Whip after the shock hits your enemy. Instead, the combined spell would end... following the Shocking Grasp duration, NOT the River Whip duration.   But! Remember, Young Sorcerer, your River Whip is a ranged Touch attack on an opponent. So you can channel your Bloodline Power of Thunderstaff through the whip for up to 3 uses of your River Whip for an additional 1d6 points of damage per hit! Not to mention... you can attempt to disarm your enemy at the same time... it is a whip after all.

Thank you very much for clarifying this for me!