WorldEmber 2021 is worldbuilding challenge in The Real World put on by the fantastic folks at World Anvil. This here article you’re reading right now is author E. Christopher Clark’s pledge to write 10,000 words for the aforementioned challenge—even though he’ll have just finished National Novel Writing Month and he’s got a book called The Elixir of Denial coming out on December 21.

Never let it be said that the lad ain’t ambitious.

Officially speaking, Chris is supposed to say some magic words to formally declare his intent to participate, so here goes: “I, the ever-loving blue-eyed Clark, commit to writing at least 10,000 words of new material in my Clarkwoods Literary Universe between December 1 and 31, 2021.

What follows is a list of things Chris plans to work on during the month.

The Cultures of Oz

During WA’s Summer Camp 2021 challenge, Chris did a fine job of fleshing out two of the four halfling ethnic groups in the Oz region of Eden. His first WorldEmber task will be to flesh out the other two:

He may also want to look at the legendary Menehune of the Real World, and how they might tie into his halfling lore. According to a guide found on the website of the University of Hawaii,

The first population census in historical times was undertaken in Wainiha Valley, Kauaʻi, near the beginning of the nineteenth century. A careful census of the valley counted more than 2,000 people, sixty-five of whom were described as menehune. Menehune were the legendary race of small people who worked at night building fish ponds, roads, and temples.

Chris also wants to firm up the lore around Riverbenders, those rare folk who have traveled through time, managed to change the past, and caused Calamities as a result.

Riverbenders, in Chris’ new conception, are all cursed to walk through the story they’ve rewritten as outsiders—and to watch how their new lives play out.

The articles on Emily Henderson and The Ghost will need to be updated (which of course won’t count for WorldEmber), but a new article on Jakob the Wanderer can be written and count towards Chris’ 10K goal.

The Silvers of Earth-668

While The Silver Family of Earth-669 is relatively fleshed out, the Earth-668 version of the family—which is coming into play in Chris’ in-progress NaNoWriMo novel—has not.

Therefore, an article on The Silver Family of Earth-668 seems like a good candidate for writing during WorldEmber, along with any character articles which might spin off of that.

Finally, and perhaps most importantly, Chris plans to focus the bulk of his attention during WorldEmber on The Reek. The Reek is the least-developed of the constituent lands of Eden, with oodles of towns and cultures already developed for Nunya, Wonderland, and Oz. All Chris really knows is that The Reek is the most technologically advanced of the lands of Eden, and that they hide themselves away from the rest of the world with gigantic wall.

The One of Everything Project 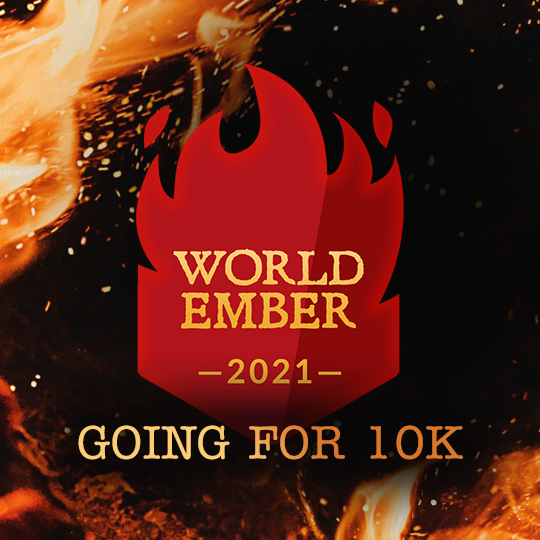 The following are articles posted by the World Anvil team in the lead-up to WorldEmber 2021, included here to inspire Chris when he’s feeling the 10K Task is impossible.

Unless otherwise specified, all artwork on this site is by E. Christopher Clark.
Blogs

Good luck! :D Looking forward to seeing what you come up with!

Thank you! It's going to be fun. NaNoWriMo, while it's been great, has far less of the community aspect around reading other people's work (understandably, since it's not finished work). I'm really looking forward to the camaraderie that comes with events like WorldEmber.   And looking forward to lots of articles about mushrooms, obviously!

Woo! Great goals to aim for--I wish you the best WorldEmbering time yet!

Thank you! And same to you! You're working on Luridity, right? Or am I remembering wrong?

Yep! Will be bringing Luridity to life with some characters this month!

Good luck :) Sounds like your universe is going to be grand, and I’m excited to see how it grows!

Check out my Roway: The Crowned Jester, my entry for the Bardic Challenge
Powered by World Anvil