“I live in a world of fire and sand. The crimson sun scorches the life from anything that crawls or flies, and storms of sand scour the foliage from the barren ground. This is a land of blood and dust, where tribes of feral elves sweep out of the salt plains to plunder lonely caravans, mysterious singing winds call travelers to slow suffocation in the Sea of Silt, and selfish kings squander their subjects’ lives building gaudy palaces and garish tombs. This bleak wasteland is Athas, and it is my home.”
— The Wanderer’s Journal 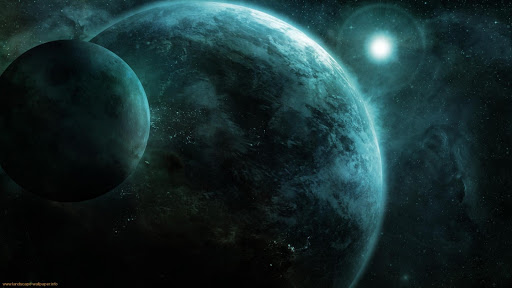 
Athas is a dying, desert world shattered by devastating magic. Long ago, a sorcerer named Rajaat initiated the Cleansing Wars to rid the planet of all species but the first - the halflings and thri-kreen. Though the purge ultimately failed, the war left the planet a broken husk, slowly bleeding out toward its inevitable demise. Across the shattered dunes, greenery is rare, and there is little water.   The planet has begun to come apart, wracked by death-throes. In recent years, a massive earthquake rocked the region of Tyr, and magical storms crackle blue across the skies of the southern reaches. The city-states offer the illusion of protection but are ruled by tyrannical sorcerer-kings. In Athas, all life struggles to survive.

"Those who can not keep up die."
— Dal'Lar Heris, Elven Raider 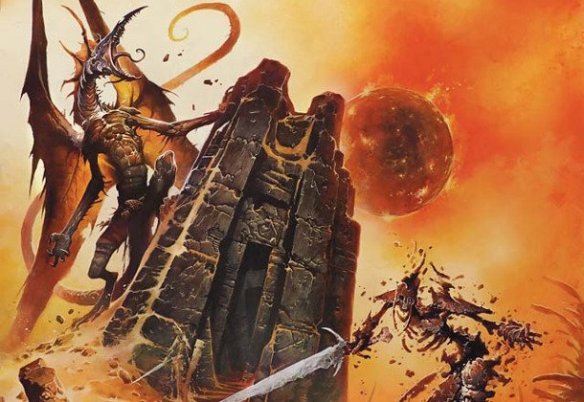 No Gods, No Masters


Athas has no gods. Some believe they abandoned the world after the Cleansing Wars and the defiling, others believe the Primordials killed them, and others still believe there never were any gods in the first place.   As with everything on Athas, the survivors adapt. Elemental clerics find attunement with the living elements, shamans commune with spirits, and druids commune with harsh aspects of nature. But in the end, the world of Athas is on its own. 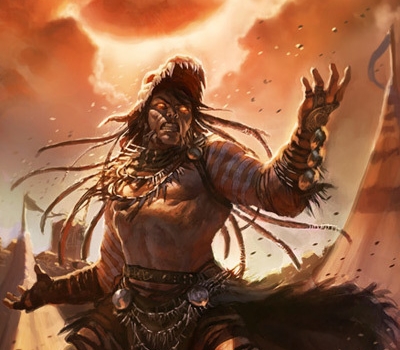 
When Rajaat brought arcane magic to the world, he sealed its fate. The reckless use of arcane magic during ancient wars reduced Athas to a wasteland. To cast an arcane spell, one must gather power from the living world nearby. Plants wither to black ash, crippling pain wracks animals and people, and the soil becomes barren.It is possible to cast spells with care, and avoiding causing more damage to world, but defiling offers more power than preserving. As a result, wielders of arcane magic are reviled and hunted across Athas regardless of whether they protect or defile. Only the most powerful spellcasters can wield arcane might without fear of reprisal. 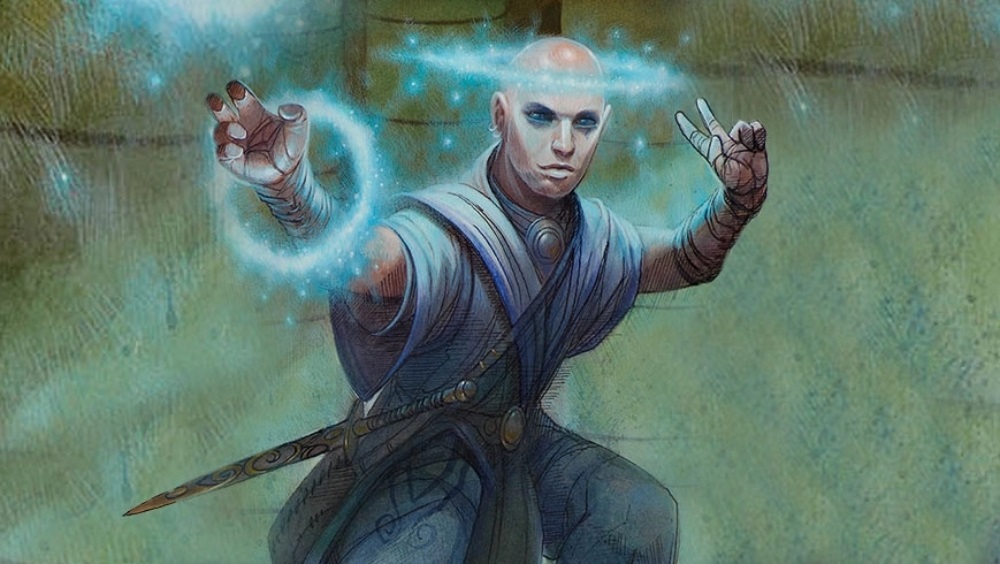 Bastion of the Mind


Athas is awash in psionic energy, so much that nearly every living thing has some psychic resonance that may manifest in strange abilities. Psionics draws from the self, and not by draining the world the way arcane magic does. They don't require communion with some greater entity, the way divine magic does. The people of Athas generally call the innate ability ‘the Will’, and the study and practice of it ‘the Way’.

"When trading with half-giant speak slowly and simply.
Mind of a child, strength of three grown men."
— Salstine or Sal, Tyr Merchant


The Defiling caused many minerals to decay or become brittle, leaving Athas’ mines depleted. Steel and iron are rare, and most tools, weapons, and armor are fashioned with bone, stone, hide and scarce wood instead.   Obsidian is one of the few precious materials. Its use as a focus for defiler magic makes it all the more valuable, as the sorcerer-kings and other defilers look to collect and hoard it whenever possible.   City-States mint Ceramic Pieces that can be exchanged for 1 pint of water drawn from a city-controlled well. These ceramic pieces are the main form of currency in cities.   These ceramic pieces are generally made with small bits of metal and marked psionically to prevent counterfeiting. They are perforated, and can be broken into ten smaller pieces, known as bits. Bits are used as change for transactions involving ceramic pieces.


Clean, drinkable water is a precious resource, often used in place of all other currency or barter. Having a stockpile of water or some way to generate it makes you very valuable - as either ally or target.   From the first moments of dawn, the crimson sun beats down from an olive-tinged sky. Temperatures routinely exceed 100ºF degrees (38ºC) by midmorning and can reach 130ºF degrees (55ºC) or more by late afternoon. The wind is like the blast of a furnace, offering no relief from the oppressive heat. 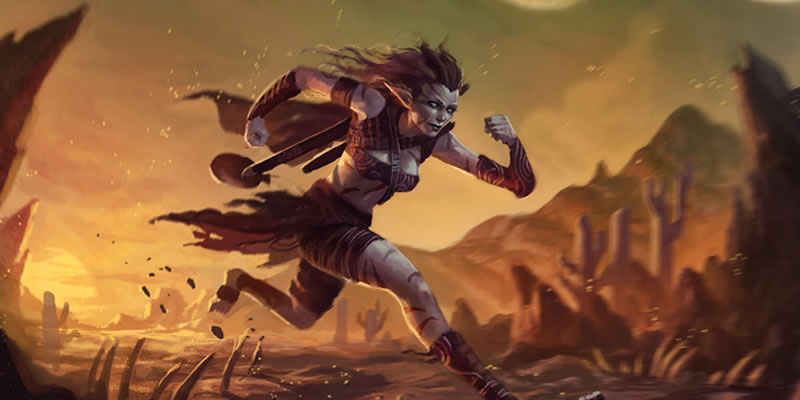 
On Athas, elves are a nomadic race of herders, raiders, peddlers, desert runners, and thieves. Halflings are xenophobic headhunters and cannibals who hunt and kill trespassers. Dwarves are stoic and single-minded bent on their focus, and often used as slaves. Goliaths or half-giants, as they are commonly known, are brutal mercenaries who serve as elite guards to templars or sorcerer-kings.. 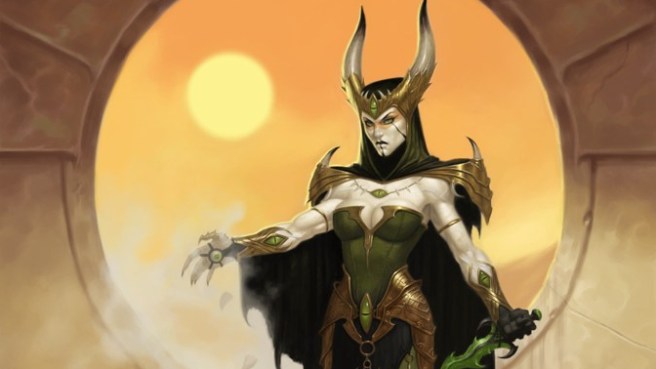 
Rajaat brought about the end of the world that was, aided by an army of champions - powerful sorcerers who eventually betrayed and imprisoned him.   Those champions are terrible defilers of immense power and rule the city-states. These mighty spellcasters have held their thrones for centuries; no one alive remembers a time before the sorcerer-kings.   Some are brutal oppressors, and others are more subtle in their tyranny. The sorcerer-kings govern through bureaucracies of greedy, ambitious templars, lesser defilers who can call upon the kings’ powers. 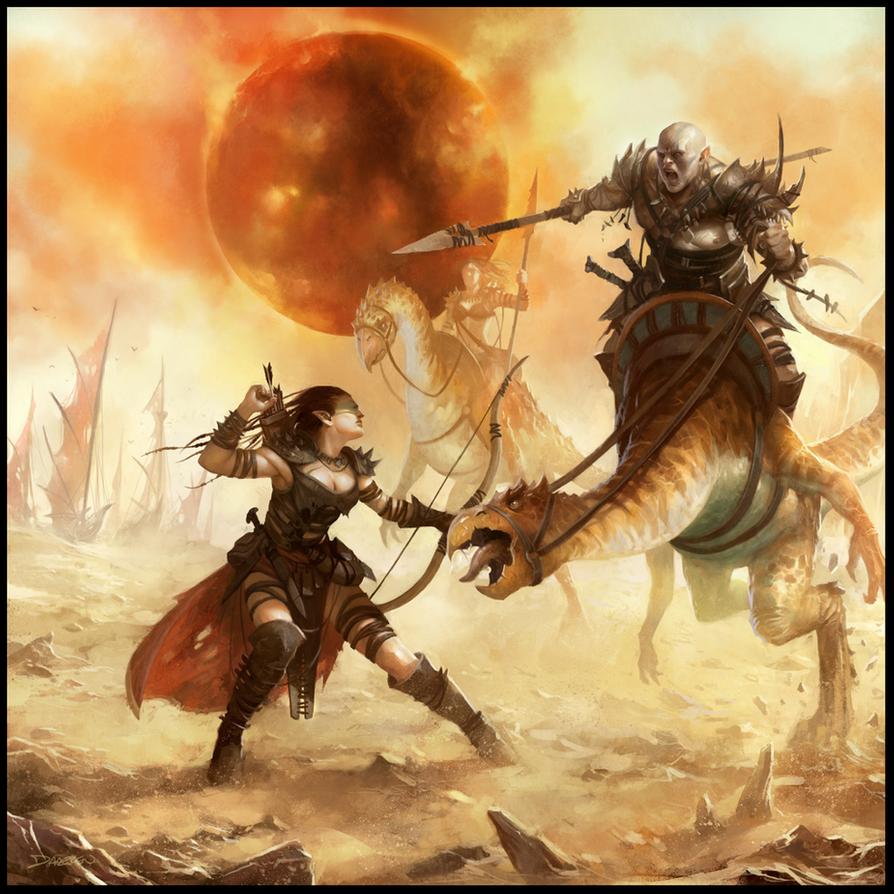 
Fierce monsters roam the desert planet’s deadly landscape. Milder or domestic creatures have long since died out or never existed at all. Athas has no cattle, swine, or horses; instead, people tend flocks of erdlus, ride on kanks or crodlus, and draw wagons with inixes and mekillots. Terrors such as the Id Fiend, the Baazrag, and the Tembo roam the wastelands.   Perhaps the harsh environment of Athas breeds creatures tough and vicious enough to survive it. Maybe ancient sorcery poisoned the wellsprings of life and inflicted monster after monster on the dying world. Either way,the deserts are perilous, and only a fool or a lunatic travels them alone.

"People are no good. You can only trust animals and the bottle.”
— Callar the Half-elf

Theme Song
Valley of the kings by Blue Murder

Important Dark Sun Articles
Dark Sun ... that was then ...
Dark Sun ... this is now ...
Important Kindred Articles
Introduction to the shadow War
Vecna - The Undying Father
Book of Night
Tenets of Vecna