The Bahku have a plantigrade bipedal stance. The tail is muscular with a tuft of fur at the end, but limited motion control and no prehensile ability. The fingers and toes have retractable claws. They stand between 5ft and 6 ft tall. Males are more muscular with a longer and fuller mane. Eyes are yellow gold. Nose leather may be pink, brick red-brown, black or grey. The ears are short and rounded, high on the sides of the head and highly mobile. They have 2 pectoral mammae and females have a bust development like humans.

Females have a heat cycle twice yearly ( frequently referred to as "Ragar's Itch"), delayed while nursing young. During heat they become attracted to almost any male of most species and become distracting to themselves and to male Bahku. Ovulation is induced and many females take to self pleasure devices to "get it over with" quickly. The heat cycle typically lasts three to five days. Bahku can cross breed with their supernatural monstrous relatives, Rakshasa. This is considered a horrible thing and offspring are shunned by Bahku and looked down on by Rakshasa.
Gestation is about 240 days and litter size is 1-3 cubs. Nursing lasts 0.5 to 1 year with increasing solid food after the first 6 months. Cubs upto 5 years are accepted into most families at almost any time. Both males and females are involved parenting and training cubs. From 6 to 12 yrs they form a subtribe of untested and spend time observing, learning and devloping needed skills. Between 12 and 14 they enter "the Test" - a specific quest, a year's exile and survival apart from clan and tribe or some similar challenge. They may change tribe at this time and take positions as followers of warriors as Oathtakers that serve as loyal and obedient underlings. If they have survived the year they are accepted by family tribes as full member warriors.

Hearing is good, on a human scale. They have excellent dark vision, extending to ultraviolet spectrum. They lack a sweet taste sensation - with only salt, tart, umami, sour.  Sense of smell is slightly superior to humans.

A well grown mane in adults is attractive and doubly so when adorned with many beads.

Mates are selected by mutual consent or sometimes female in heat need. Same gender couples are accepted.  Courtship is simply asking if a potential partner will have you.  Sometimes conditions may be set by one or another party.

There is little separation of duties or responsibilities by the sexes - excepting that lactating females exclusively nurse cubs. Cub care extends to sisters, brothers and cousins. All warriors hunt or engage in foraging and preparing food.  Polyandry, polygyny and polygamy are practiced by partner consent and conditions. It is considered greedy to not display and show the wealth of relationships or make exclusive claim. Likewise acting without partner consent is theft of their rights and a grave social error.  It is honorable to make gifts and special considerations to partners.  To take without giving, except if the offering is expressly a gift,  is dishonorable.

One traditional Bahku weapon is the Engadaw. It is a bola like weapon worn as a belt, with weighted hooks on a 2 meter looped braided line.

The Bahku language has a high form for ritual and special occasions such as promises and oaths, prayer and for tribal leadership in the Inx  region.  The low form is the day-to-day language.  In the Inx region the High form has a dot and slash written form used by Cloudreaders and Poets.
In the Inner Sea Imperial region ,the bahku language is all the formal High version. They have no written form, adopting the Taurien letters where they have taken civilized ways.

The overall Bahku outlook is "Seize the day". Life is for living, not laying about or hiding from things.  Bahku responsibility extends to things done and made by the individual. In exchanges a maker will frequently state that it is against the maker's will that anything should go wrong. It is also known that things and persons can go beyond their limits and be destroyed. Bahku do not steal from the living - but may take prizes from vanquished foes. To take from your dead is weak and shameful scavenging. Only things bought, clearly traded or given may be owned. Unbequeathed goods of the dead are burned and broken and sent with the owner into the spirit world at burial or cremation.
The freshest raw meat is the choicest offering to guests and allies. Dried and cooked with spices, flavorings and some leaf or root stuffings are eaten. Bahku are very fond of breads and doughs which are not part of their traditional foods.

A Bahku barbarian braids the mane ( longer and thicker in males) and sets it with a bead for each combat victory. This gives them a "dreadlock" appearance.  Traditional garb is leather vest and breeches. Bone, leather and some copper or bronze sheet is known, with limited iron for weapons. Those who have taken civilziation under the Centaurs and Minotaurs will wear linens and fine silks. They enjoy jewelry in both sexes and in civilized and barbaric conditions.
In the Inx region Bahku mercenaries or guards are known in most cities with some elevated by Hunting guild, adventurering and other political wrangling into positions of power. The wild tribes live traditional nomadic lives beyond the gap at the northern end of the Chentor Plain.  Within Chentor and south they form settled communities or mingle in cities, towns and villages of the the races.

The society is matrilinear and largely egalitarian. Clans within the tribes are blood kin of the eldest granddame, her sisters and those descended from them. Tribal leaders are charasmatic and skillful warriors and hunters. They ascend by formal duel, politics or by having gathered around them a group of warriors and Oathtakers and give a larger following.

Bahku oaths are observed and enforced by their Gods, the more powerful ones overseen by Poets that sanctify them. This extends to nonbahku who make promises or Oaths under the bahku forms. Even a simple promise carries curses if broken.  The great Oaths can weaken and destroy oathbreakers. To break an oath is to lose yourself and can cost all rights, status, property and family.

Bahku observe traditions on Honor.  They will not attack the weak or helpless, but may kill to end suffering. Wealth is counted as not important, but displaying how little one cares is important. A Bahku will make a great display of gift giving and generosity to the disabled and poor. Blood is sacred and associated with death and evil - so vampires and blood drinkers are greatly feared for the power of stolen blood and unclean power.
Taking from a vanquished foe is a trophy or prize. All other forms of taking without grant or permission are seen as dishonorable theft. Thieves are rare even amongst settled Bahku because of the sanction and dishonor of such activities.

The Bahku say the world is a shadowy reflection of a true universe inhabited by archetypal spirits ( that frequently must be persuaded to keep out of mortal affairs). The world was born of the blood of the Gods in a conflict in the early ages of the universe. Blood is life and death and surrounded with special rituals.

The Gods gave the Bahku protectors and leaders - the Urr who are different from other mortals and stand outside of normal society. The Chosen (Urr) serve as guardians, guides and protectors and are graced with supernatural speed, strength and other powers not possessed by common Bahku.

Bahku wizard-priests are called Cloudreaders. They are generally found living apart from tribes or as Oathtakers under warrior leaders. While recognized as a person of great spiritual power and are generally deferred to, they are also scored and avoided as dangerous crazies, hunters of flowers and bugs and unhealthily involved in the Spirit World. The Cloudreader invokes spirits to learn imprinted patterns that become physical scars or may be drawn with scratches or sands and materials.

For the Bahku, the sky is the realm of spirits who wear the forms of Clouds. The world is a warped shadow, a side effect of the activities of spirits. Most gods and spirits are not very interested in mortal affairs. The four Bahku Gods are: The poets, or Bards are seen as slightly better than the mad Cloudreaders. They are wandering teachers, spreaders of news and lore and tellers of tales as homeric bards. They are also holy servants of Thrahct, Binding Oaths and compelling truth. For this softness, in the Bahku warrior culture they are seen as weak dolts and dreamers who need strong warriors to protect them.

Bahku in both Inx and the Imperial Inner Sea regions have had complex competition, conflict and alliance with the Centaurs. They have limited interactions with most Fae, most likely fighting Unsealie Goblins or respect for Trolls, or weary interactions with trickster Pooka. Humans and Bahku may form friendships or rivalries but have no specific species tendencies. Bugbear and Ghenid Ghenid Culture are frequently enemies and rivals as both species have radically different societies and behavioral outlooks.  It is rare that the monster races live in civilized settlements but these may see the different species on agreeable interaction.  Bahku can drink and will sometimes develop appreciation of the Ghenid drink - Crua "Ghost blood or War/ Fighter's Ghost". Bahku do not like or tolerate kobolds under most conditions.
Bahku are bipedal felid race of nomadic tribal carnivore barbarians. They are scornful of leaf eating, scavengers, cowardice and weakness both physical as well as spiritually. They tend to formality, chivalric honor and boastfulness and display of wealth, skills and influence. 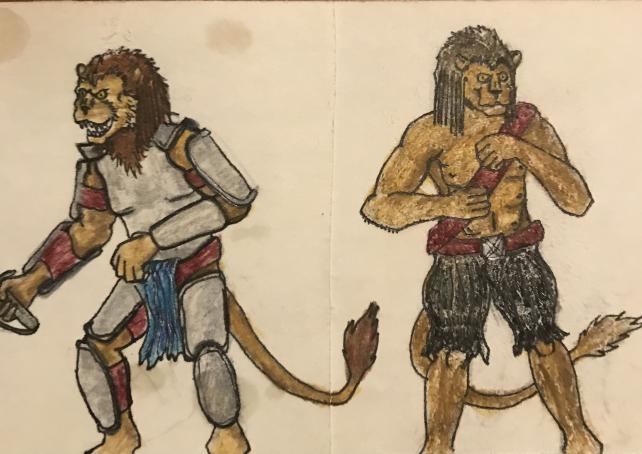 Just realised I haven't seen any stuff from you in my notifications - make sure you push to followers after you publish an article so we see it! :D   This is a really interesting article. There's so much detail and fascinating different aspects to Bakhu culture. I love their honour.