The Town fell into the Free city status in the pre-imperial period of the Three Dragons War. The Ruling Clan was wiped out and the town looted. On rebuilding they had no local Lords and so made themselves a Free City. They pay the tax to the Empire as citizens and have a Garrison of Legion and Monitors stationed in the Fortress. Individuals may appeal to Imperial law. The Imperials work with the Guild for general works.

The Guild has Enforcers and Informers most everywhere.  The Law is that the Thieves Guild permits Marks on recovery of debts and items, personal feud and insult.  The guild charges 50% of the reward on collected Marks. Marks are taken with guild local posts or the main Hall. Payment is made on taking out a Mark.  Green Marks are missing property recovery....or perhaps liberation of some treasured or interesting item.  Red Marks are beatings or duel. These may be personal vendetta or taken by a spouse or lover against a cheating partner or their associates. They are not supposed to be lethal, though accidents happen sometimes. Black Marks are Dead or Alive. The Guild offers these on offenders, guild rule violators and major threats.  Guild Enforcers and Assassins typically take Black Marks. Sometimes Seekers. Copper Mark gets a notice of Marks against you. Silver Mark gets Informer checks on justification or validity of a Mark taken out. Unjustified claims are rejected.  Gold Marks are Protected from Marks upto 500 sp value. Markers are investigated. The Marked get notice.   Any citizen may fulfill a Mark and claim the reward.  Seekers are a profession of Mark Collectors.

There is the Thieves Guild.  The Merchants and artisan guilds.  The Seeker Guild of adventurers and bounty hunters. 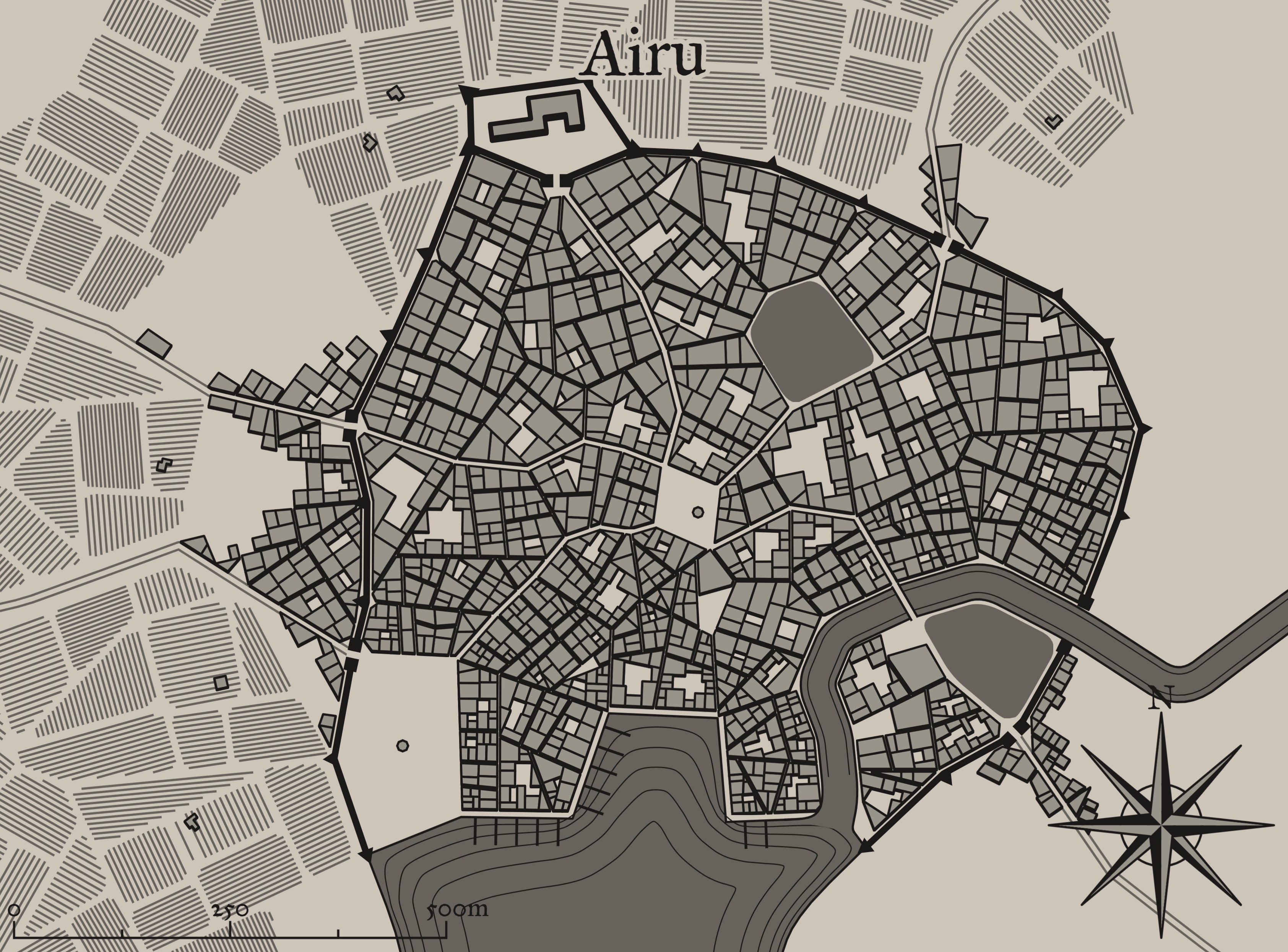 The Thieves Guild Of Airu


Originally a classic guild of thieves and beggars that sold protection, the guild became the chief law enforcement and fire watch. Property owners were first approached for protection. Then individuals asked about home and protection from pickpockets and cutpurses. Guild informers and enforcers were everywhere, so they were paid to additionally watch and call out in case of fires or to help break up brawls and other fights.
Today the Guild collects a tythe from businesses and 50 sp per year per person or 100 sp per family or household. The protected home and business has an emblem of 4 overlapping handprints in flower-like array. Likewise a medallion was made for individual use. It is illegal to sew or embroider the emblem into clothing, bags or sashes. This is license evasion and punishable by beating and confiscation, and increasing levels of violence and life threatening attack.
Guild Informers patrol the streets in plain clothes, or even may be paying customers. Enforcers break up threats to stability such as brawls, unapproved marches and unlicensed festivals. They also bust up unlicensed stalls, arrest freelance thieves and those who violate the Safety of the emblem. Informers and Enforcers also watch out for fires and will set up alarm if such are noted. Likewise all goods are checked and the merchants paidup. Trying to evade the fee results in confiscation of goods and a beating. Impersonation of a Guilder is likewise a beating the first time and death thereafter.
Con-men and Sharpers are not criminals so long as they have paid their Guild Dues. There are blacklist persons that are not permitted to bet or wager or be taken by the Sharpers, such as the witless or children, or those who have been impoverished.
The Lawyers are another branch of the Guild. They will arrange payment programs for debtors after softening them up with Enforcers. Defaults get additional beatings and another chance to pay. If payment is still behind or not made, the debtor is clasped in chains and sold to Bond slavers or worse. Troublesome individuals may be killed and left as warnings.  Associated with the lawyers are the Fixers:  this is an ombudsman position that links workers with jobs, sometimes via bribes and payments but mostly with an eye towards growing production and trade and cash flow - the unemployed can't pay and the tythe grows with individual wealth.
Kuan Empire and Region of the Inner Sea
Cover image: https://azgaar.github.io/Fantasy-Map-Generator/ by mutterwolf
Article template
Settlement
World
Charron
Author
Mutterwolf
Publication Date
29 Jul, 2020
Creation Date
29 Apr, 2020
Last Update Date
24 Aug, 2021
Visibility
Public
Views
121
Favorites
Comments
0
Work In Progress