Created in conjunction with Durzarina. Art does not belong to us.

Due to the many jobs Cor endured before piracy, Cor is rather fit, really agile with no known abnormalities. When standing tall, she has an athlete's build.

The main feature from our girl Cor is her long straight ginger hair.  Underneath an overly large flamboyant "pirate" hat, she will have the front portion of her hair up and plaited down.

Cor has probably the softest features from the crew of Dead On The Water.

You will be able to spot her from a mile off.  Flamboyant Hat and Coat.

Cor has noticeable quirks which are unknown to her but to others, if you know them, you can read Cor like a book. Cor is ambidextrous, but in a fight, she will use her less dominant hand so she can surprise her enemy when she switches hands.   When she is nervous, her hands will begin to twitch and pretend to play a specific melody. You can and will only ever find Cor in two places on the ship, at the bottom with the healer or on the top deck stairs playing music and watching the waves go by.

Cor mainly wears a long and aggressively flamboyant dark red coat and matching tricorne hat. Long brown boots and trousers with a plain cream loose blouse. She wore three belts around her waist, one for her sword, one for her Lute and one for decoration. On her middle finger one ring sits on either hand. One from Val and one from Jean.

Cursed Trousers - as pretty as they may look, these are cursed. Though Cor was not aware of them till she began to wear them. In a secret pocket in her jacket, Cor keeps a Little Acorn that fears the great sunlight. A silver rapier with an onyx pommel, a gift from Alfyn Weis. The blade is decorated with the holy sigil of Fenmarel Mestarine, a reclusive elf god. Turtle Shell Lyre, gifted by El found on a Harpy infested isle. A palm-sized bronze automaton of a goose. A small trinket that was found on the Harpy infested Isle.

Cor slowly enjoyed being a pirate, and was enjoying being wanted/needed by the ever battleworn crew; but she did kind of miss embracing her femininity and wished to see another female. They docked at Peregrine Bay to which her accidental transfer to “Dead on The Water” She claims that she got on the wrong boat in her drunken stupor… but was it really? Cor believes that Captain Kat kept her on the ship for her healing abilities. Cor was slowly able to loosen the ties to her ‘Male’ self though she told El and Shield that Cor is male- through habit. Although, the ‘costume’ finally came off when she had to pose as the Captain otherwise her crew members would have perished.

So far, Cor has expressed interest in male attraction, but there should be no reason why females can’t be excluded.   We are all here for the experience right?

Cor didn't really have much of an education. Her mother's view was "learn while you live". Cor spent most of her days doing exactly that. She did manage to learn to read and write from a travelling entertainment troupe's writer who decided to stay in North Rock for a little longer before returning to the troupe.

Due to Cor's mother's views, Cor had many jobs. Her favourite was child minding when their parents wanted to visit the tavern. She would play games and make stories beginning on her bardic way of life. But the problem was not being able to read and write. From there she met an elf, Valentine, who promised to help her to read and write. He stayed in the town and opened up a small indoor theatre where Cor and the children could continue to make and create.   Cor's mother, Vita was furious as she developed a slight distaste for Elves since Cor's father left. This was the first time Cor heard mention of her father. They fought really badly and when Val decided it was time to go back to the entertainment troupe, Cor snuck away with him.   Cor worked hard as a stage hand and eventually as an actor and musician. Cor and Val had a thing going but it wasn’t really official and convinced each other it was just a “thing”… every night. One night as Cor and Val played in a tavern they were stopping at, it was raided by very drunk pirates. Cor managed to persuade them to not burn it to the ground and helped them back into their ship. The captain was so unaware of Cor entering their company they took off. Cor was taken into their company, only the Captain knew she was female and Cor ended up posing as a pirate male - the healer and entertainer for the ship.

Since Vita never drilled Cor to reach for goals; Anything Cor did, she never saw them as accomplishments as she just did it.   For Cor personally, her main accomplishment was finding out that she was half-elf and managing to tap into her elven powers. It gave her the confidence and charisma which she still carries in the present day.

Like her achievements, Cor doesn’t see her ‘failures’ as such, but more as experience. Cor herself is classed as a failure and an embarrassment in her mother’s eyes, but that’s only due to her shaded view on male elves and not accepting Cor for the bard that she ended up being.   It wasn’t till Cor found herself on the first pirate ship that she fully understood what ‘failure’ meant. Failure means death - whether it means your death or someone else but it usually means death.   One thing that Cor does tend to do, which is more of a flaw than failure is get close to someone. She needs that one connection to help her boost her own moral.

There was no such trauma that vastly changed Cor’s life, but there will always be two instances in which Cor will never forget.   The first was how she was ripped away from Val by fate. As much as they will deny it, they did fall for one another and she never got to express her feelings. What was he doing now? Had he forgotten her? After all, they were just a ‘thing’ right? The lyre she carries was a gift from Val and when she sits in the corner and plays it, she is thinking about him, as much as she tries not to.   The second however, happened on the pirate ship before Dead on the Water. As Male Cor, she had to endure the darker side of pillaging and plundering. It wasn’t the killing and murder; it was the other side. The side in which Captain Jean had convinced her to take on a male persona. It messed with her mind as the crew were so kind any other time, and seeing them perform such acts, churned her stomach. Every other aspect of piracy Cor could handle, but that… that was a no go.   Luckily, the Captain knew this and saw how changed Cor became upon seeing it the first time. He offered her refuge from these moments and in those times, a love did blossom between the two.

Cor is not very bright when it comes to logic and reason. Being academically deficient, Cor tends to throw out silly and almost stupid ideas which usually makes her the butt of most jokes aboard Dead on the Water. She doesn’t mind it, but thankfully her charm gets her laughed at instead of beaten- which in her eyes, is a win!   Cor’s main knowledge comes from life experiences which gave her charisma and deception boosts. She spent most of her ‘travelling’ life pickpocketing, while performing and constantly telling lies to the crew on Daughter of Pearl. When she boarded Dead on the Water, she soon realised that she was not as smart as she thought she was since everyone was at least knowledgeable in academics or had some sort of education; Cor however did not.

In the beginning, Cor was all about the well-being of others which then caused her to forget about herself. She always put on a brave face no matter how she was feeling. As long as everyone else was okay, she could continue. But as soon as she became a pirate; Cor had to learn the hard way about self care. Jean had to remind her that no one cared for her on this ship - except for maybe him.

“Everyone is out for themselves. No one will weep for you if you die, you will just be replaced.”
— Captain Jean Lafitte

Cor took this as a gentle reminder to harden her heart and think only about herself. She kept to herself unless she was with Jean to which the both took sexual solace in one another. Upon Dead on the Water, this mentality wavered as she realised that they were a lot more like a family than a crew. She cares a lot more than she thinks. 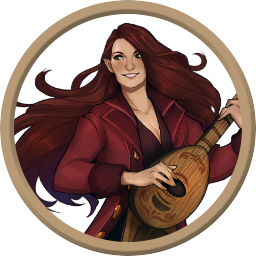 The Pirate Bard who tried her best!

Arrasgoth is a custom roleplay setting based in the system of Fifth Edition, created by OncomingShower.   Arrasgoth draws inspiration from many different settings and lore within the Fifth Edition universe as well as other historical settings and events, under the Open Game Licence.   Dungeons & Dragons belongs to Wizards of the Coast and she claims no ownership of it.   All crests and portraits were created at World Spinner using either the Portrait Workshop or the Heraldry Editor.   All headers and cover art created at Canva using free images on their website.
Article template
Character
World
Arrasgoth
Category
Dead on the Water in Arrasgoth Important Parties
Author
Durzarina
Publication Date
30 Jan, 2021
Creation Date
30 Jan, 2021
Last Update Date
21 Dec, 2021
Visibility
Public
Views
164
Favorites
Comments
0
Work In Progress