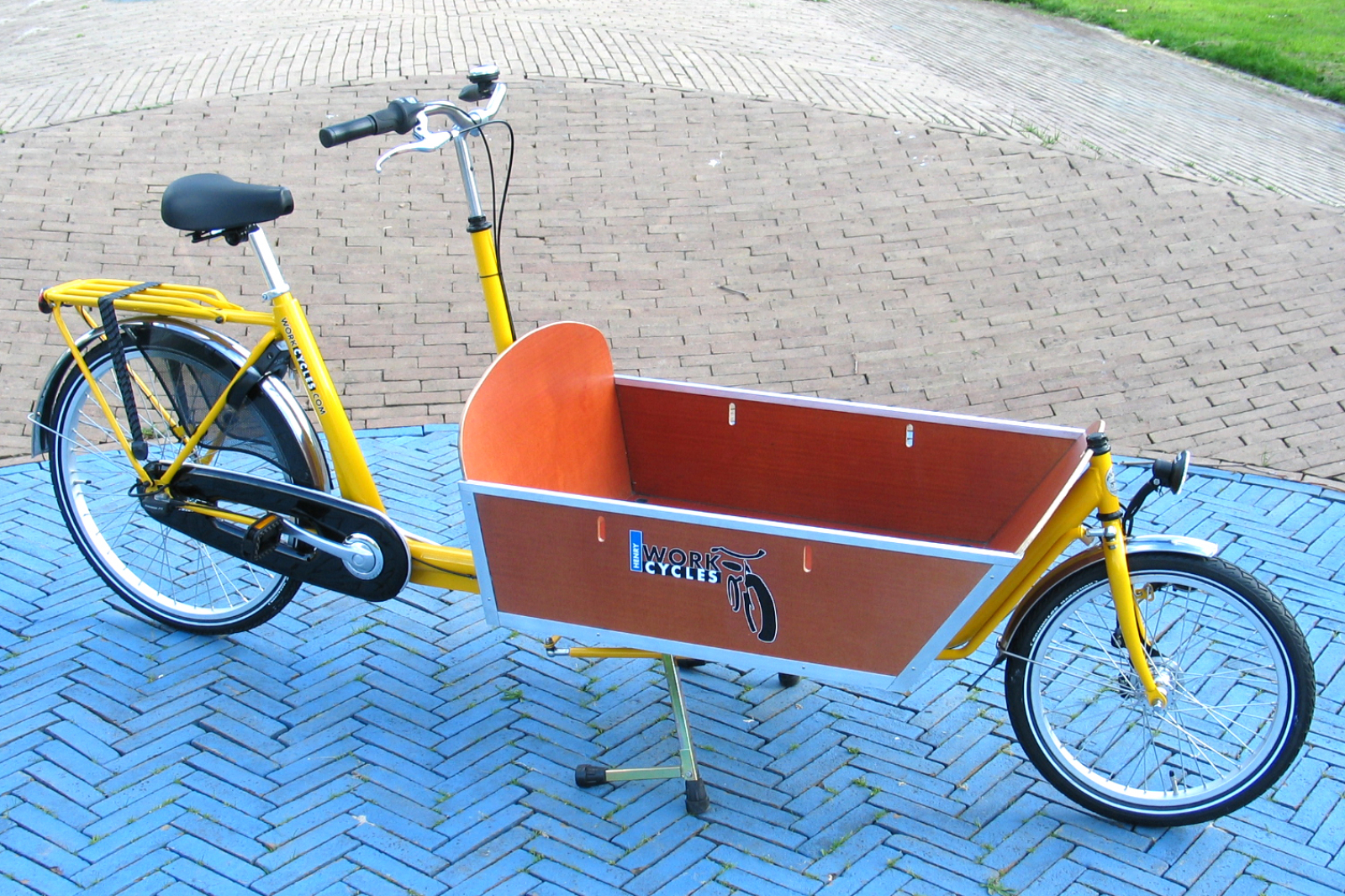 Cargo bicycles are sturdy bikes built to carry heavy loads and often two or more people. The bikes vary in sizes and shapes, may have two or three wheels, and commonly have a longer wheelbase than a standard bicycle, with space for hauling cargo either in the front or back. Originally, they were homemade devices made from damaged bicycle parts or scrap metal and wood in small scale towns and villages. With the growing problem of congestion with automobiles especially in dense urban areas, cargo bikes are being introduced as an alternative.      As part of growing ecosocial movements, cargo bikes have been considered as they have a number of advantages over motor vehicles. They do not create air pollution and have fewer greenhouse gas emissions overall. They are less costly to operate, quiter, and are not limited by fuel availability.  More importantly to urban areas, they are less dangerous than other road vehicles and contribute less to traffic jams, especially compared to automobiles.    Design Types   There are 3 major types of cargo bikes known: Long tail, Mid tail, and front loading.    Longtail bikes: This design allows for cargo to be carried on an extended rear rack that sits over the back wheel. They’ve found popular use with families who have multiple children. Kids of most species, especially humanoids, can ride in child seats that are mounted on that rack or sit on a bench on the rear rack. Mid-tail bikes: These compact utility bikes are shorter than the longtails design. Some are about the same length of a standard bike  but with better hauling capacity. This gives them the advantage of being easier to store, transport and maneuver; some even fold up. That comes with the disadvantage that they may not be able to handle multiple kids so may not be as versatile for larger families as long tails.   Front-loading cargo bikes (“box bike”) carries their cargo in a box or container that sits low in the space between the handlebars and the front wheel. Owners of this model enjoy these bikes because they can carry kids, pets, or familiars in the front where they can keep an eye on them, and having conversations with them tend to be easier. Riders have commented that operating them takes some more practice than the other model types, but they’re surprisingly easy to maneuver.

Standard cargo bikes are pedal powered like most bicycles. Also like bicycles, there are versions with electrical motors that are either battery or solar powered. Electric cargo bikes are then equipped with pedal assists to make carrying big loads more comfortable and climbing hills easier for those riding.

A cargo bike can be accessorized to fit an owner's specific carrying needs, including adding child bike seats, panniers, boxes, rain covers, footrests or even racks that can hold large and wide objects like surfboard or paddle board.
Class
Velocipede
Nickname
Cargo Bike, Box Bike
Rarity
Becoming more common in urban areas
Speed
Manual: 16 to 21 mph/ 26 to 33 kph
Cargo & Passenger Capacity
The largest bikes have a cargo capacity of up to a few hundred pounds.