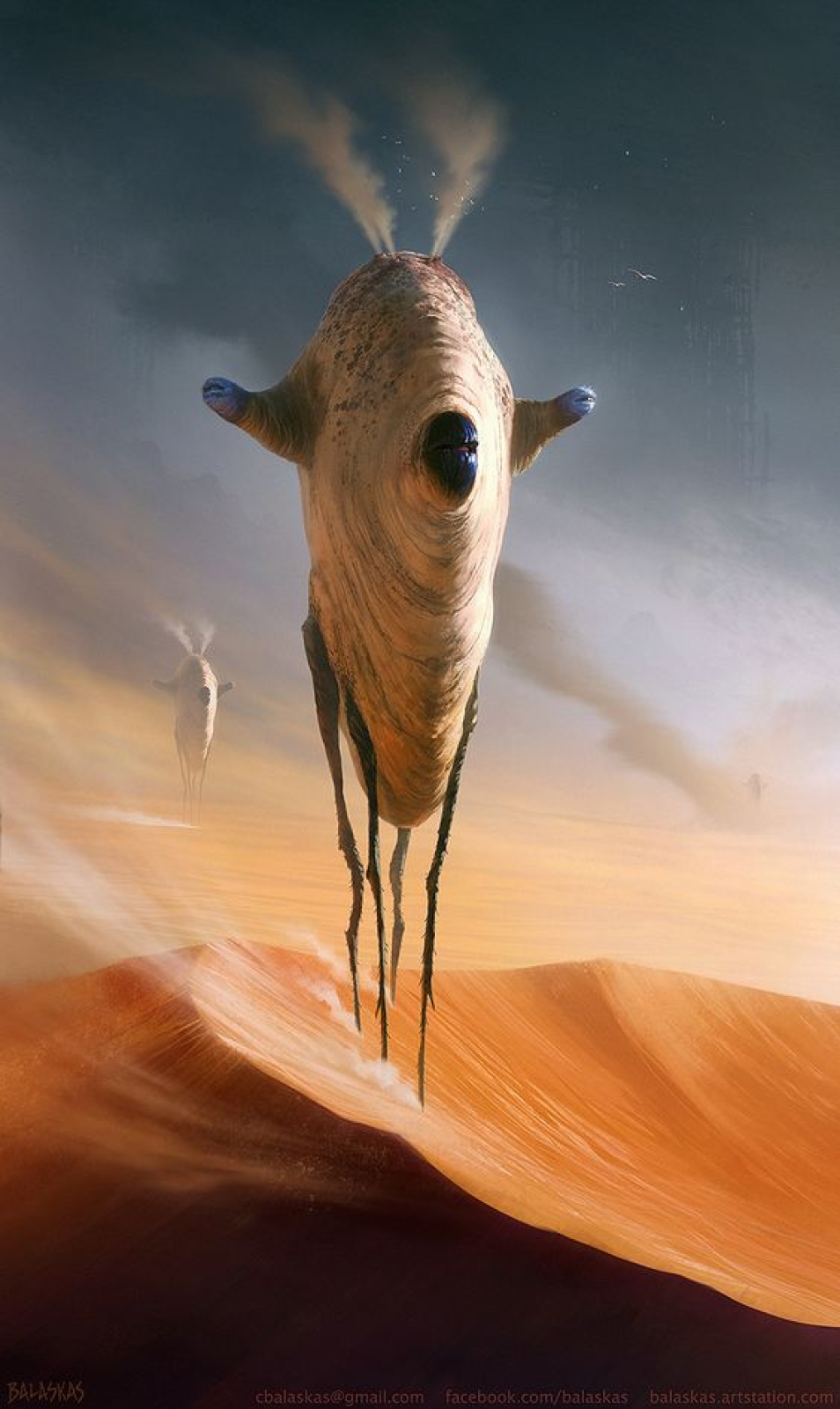 They remind us that this land is not ours. We are strangers here.
— Sencha, Blight-Tracker

Watchers are solitary Surface creatures that drift across the barren wastelands in lonely vigils. They haunt deserts and badlands, content to avoid other living things when they can. Only during the Season of Storms do the Watchers come to life and migrate to reaches unknown to mankind.

Watchers are large, bulbous creatures with the largest reported Watcher being well over ten meters in height. Most are perhaps half that, with wrinkly, thick skin that range in sandy to bleached bone in color. Vestigial legs hang uselessly from the middle of the Watchers bodies, often trailing along the ground. The Watcher get their name from the large eye-like organ at the center of their body, half-covered by rigid flaps of skin and the eye-stalk that they grow out from their bodies as they age. Most have somewhere between two and seven such stalks, though more have been seen.

by Rock Cafe.info
Watchers can open holes anywhere on their body to expel steam and other gases. Every so often, Watchers will pulse with veins of light that begin at their core to their skin, where it will discharge in a flash of light. Watchers in Blighted areas such as the Shrouded lands exhibit this behavior more often than others, leading some to believe it is how the creatures rid themselves on excess or "digested" Blight.   The Watchers flesh is tough and gnarly, having more in common with fibrous plant matter than meat. When injured, they bleed a foul-smelling dark ichor. A slain Watcher will gradually deflate until it is only a portion of its former size and its body will eventually calcify into a hard, brittle stone-like material.

by Rock Cafe.info
Watchers hover up to several meters in the air and travel the Surface in a slow, lazy drift. They are reluctant to rise so high that their vestigial legs no longer skim the ground, though they are capable to do so if engaged by a persistent hunter. Watchers are almost always seen alone and only rarely come together outside the Season of Storms. When they do, they communicate with a clicking, buzzing release of static and electrical discharge.   When threatened, Watchers can use the same buzzing at a ear-splitting volume that directly causes disorientation, weakness and random muscle spasms. In the rare cases where several Watchers have been attacked at once, the effect is amplified.

On occasion, Watchers will leave a thick sludge behind although no one has yet witnessed the process. The substance is toxic, but can be distilled into a drought that is rumored to allow whoever consume it to see the solution to whatever troubles them. It is also highly psychotropic.

When the Season of Storms comes to Araea, the Watchers change. They congregate in small packs before hovering into the storms high above, disappearing from the Surface. Eventually, after the Season has passed, the Watchers will be seen again around their old haunts. Not all make it back and some return with scorch-marks and expansive, cancerous growths that extend meters from their bodies.   Watchers reproduce only rarely and do so by dividing itself in two. A "pregnant" Watcher will begin to grow and bloat until it can barely stay above the ground. It will find somewhere relatively safe, such as an inaccessible cliff or mesa and begin the process of ripping itself into two separate entities. The new Watchers are capable of flight after just a few hours and will go on their own way.

Watchers are rare sights in the Surface, often only glimpsed in the far distance. Their numbers are low and whatever journey they take to the heavens during the Season of Storms only seem the whittle down their numbers. Some wonder if the Watchers are doomed, if there will soon be no one left to take to the stars. Others say not all who ascend are slain or lost, but that they stay there and make a new home.

Legends cast the Watchers are messengers or heralds of otherworldly forces, both gods and devils. In such tales, the hero sometimes join the Watcher on their Ascent into the stars at the end, for realms unknown.

The Surface   The Surface is a dangerous, irradiated land of frozen tundras and blasted deserts, where monsters fight fiercely for survival. The Watchers drift across the barren, desolate parts of the world and skirt the edges of the Shrouded Lands.   Read More About The Surface

Rad article! I've been kind of curious about this and maybe you have answered this question already in the past, but where do you get all the cool images for your articles? The visuals make a lot of them really stand out.

Holy heck! That was an amazing article to read! The way you describe and visualise these monsters is almost surreal! It was definitely a fun read! They give off a distinct lovecraftian monster feel to me with the eye in the middle and the tentacles. The quote at the beginning was a nice touch and with the adequate usage of linking and such, this was a very self contained and evocative article to read! Only question I had though was are there any differences between male and female watchers and are they hostile towards humans? If so, how do humans hunt them? Congratulations as always and keep up the grand work Q!

They're not really hostile unless provoked and if they even have genders, no one has been able to tell. They're not really edible either, so people don't generally mess with them unless they're being stupid (which happens)