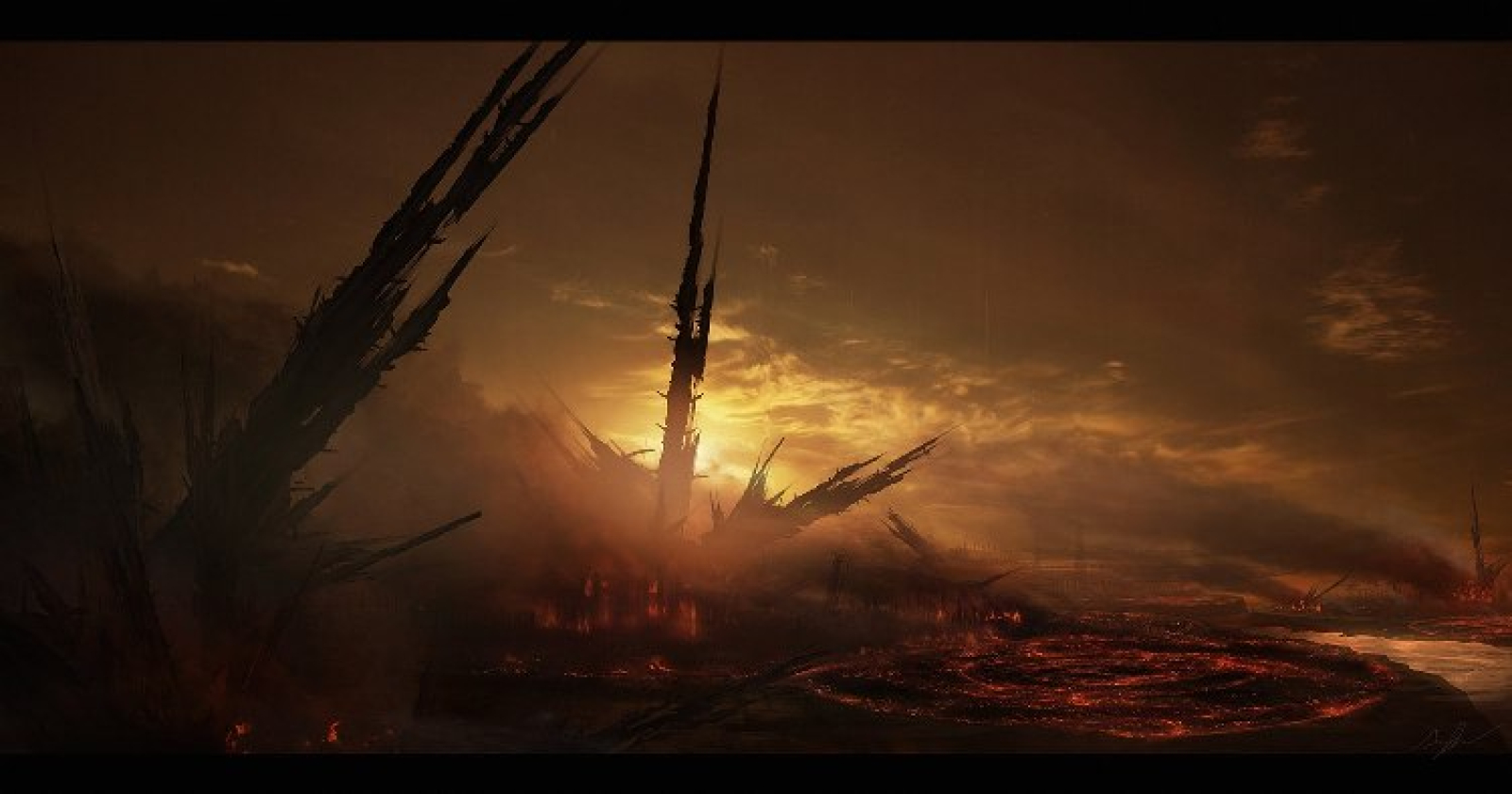 Legends of wealth and misfortune

Across a stretch of desolate wasteland lie the remains of a once mighty city. Its buildings are scattered like broken bones, left under the harsh sun and amidst an ever-shifting maze of blighted winds. The land around it is uneven, dotted with crags and sharp peaks of stone and shallow chasms. At the center of this city-corpse rises the Tomb, a massive hill of obsidian surrounded by ruins.   In this grave, the Tomb serves as its only marker and a home to those who have come to squat in its broken husk.

When the final end of Netehiri came and the magma that had fueled the city's success erupted among its streets, it left behind the Tomb. It is a sharply angled and enormous massive of obsidian. Far from smooth, it has countless razor-sharp edges and fissures. Since its creation, harsh winds and busy hands have worked to alter the irregular lump and it now has a more defined shape to it, working towards an uneven pyramid.   A string of low stone structures form jagged half-circle around its base, divided into three separate sections. Rope festooned with fluttering banners, trophies, bones and skulls are tied from varies elevation of the Tomb to the ruins around it. Painted symbols adorn the obsidian's straightest sides in various states of disrepair. The wind and dust invariably scratch away them away, and those who live in the shadow of the Tomb keep putting them up anew.

Located at the south end of the Tomb, where the devastation created short and shallow fissure, edged throughout its depth with endless jagged spikes of obsidian and stone, lie the Gorge. Sacrificial knives dangle from ropes that run suspended along either side of the charm along with choice parts of previous victims. A crude alter, hewn roughly from a block of obsidian that came loose from the Tomb, stand at the end of it and where the Tomb begins.   It is the center of power for the tribe who follow the Cannibal Queen and a place for them to worship the monolith of obsidian with sacrifice and prayer.

Jutting out from around half-way of the Tomb, the Noose is a protrusion sturdy and stable that the tribes begun to use it for grisly displays of "justice". There are three branches extending from the Noose with gibbets of iron, bone, and whatever scrap they find hand from two of them. The third is used to travel along the Noose and the edges have been carefully chipped away to be not quite so dangerous.

Gibbets   Any intruder who fall into the hands of the Cannibal Queen are likely to find themselves in the gibbets of the Noose. With its elevated position, all can see the poor unfortunate souls trapped in one bake in the sun or lacerated by howling winds. The Queen will not let any who dwell in Netehiri's ruin forget the consequences of her displeasure 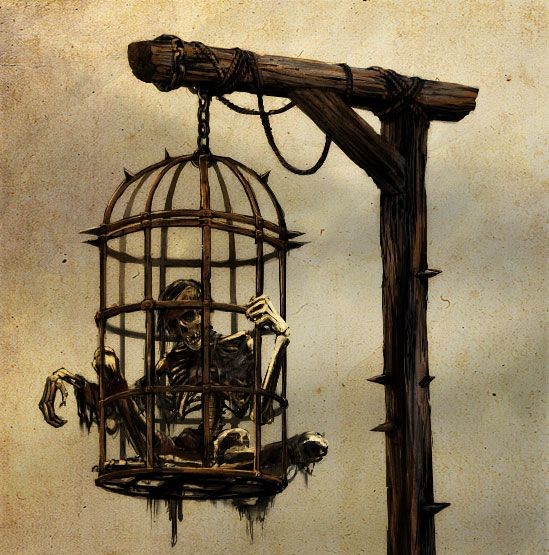 The largest structure at the base of the Tomb, cobbled together from scrap taken from the surrounding ruins, belong to the Cannibal Queen. A single building and two room, with an open front and two adjacent buildings connected by laid out paths of stone. Before the building is a short, square courtyard lined with stone and trophies of bones. Here, the Cannibal Queen holds court... And banquets.

Located in a crescent of open space that hugs the Tomb beneath the surface and accessible through either the Gorge or the Queen's Court is the brood. The source of the Queen's reign has been her unusual connection to the.. Things.. that live beneath the shattered city. Serpent-like, with too many fangs and too many maws, they devour any who are thrown down the Gorge. 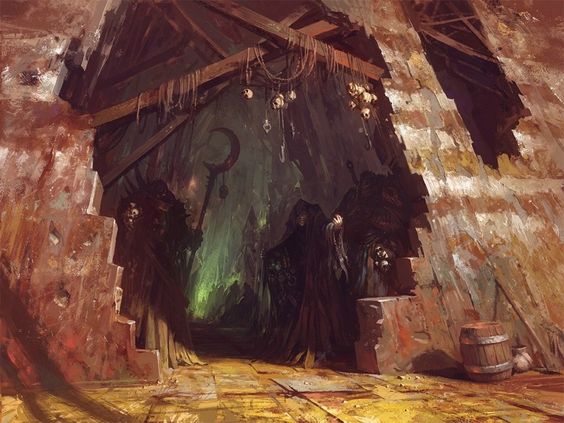 The Tomb has become the heart of the ruined city. Whoever holds the Tomb will hold the city. The tribes in Netehiri's ruin treat it as both god and devil, appeasing it with sacrifice and prayer, yet fearing its looming presence.   Besides its political significance, the homes around the Tomb lie in a section of the radiation never truly flows. The water and food here is, by the standards of the surface, much less contaminated by those found elsewhere in the ruins which gives the land near the Tomb great practical value.

Since the first Exiled stumbled across the shattered buildings, the Tomb has been there. When those who lived near it seemed healthier and less plagued by mutations and disease, it became more then a mere object. Since then, there has been incessant fighting over the Tomb by the Exiled who live in Netehiri. All seek its blessing and cast their rivals into the ravenous Gorge to gain it.   That war still rages across the scattered bones of the ancient city. Every time that strangers from the deep arrive in the city, seeking fame and fortune, more fuel is added to the fire - or meat to the sacrificial pit.   It is often the first and the last thing that those who seek Netehiri see. The Tomb becomes a gravestone for more then just the city, but for every sacrifice made to its glory. 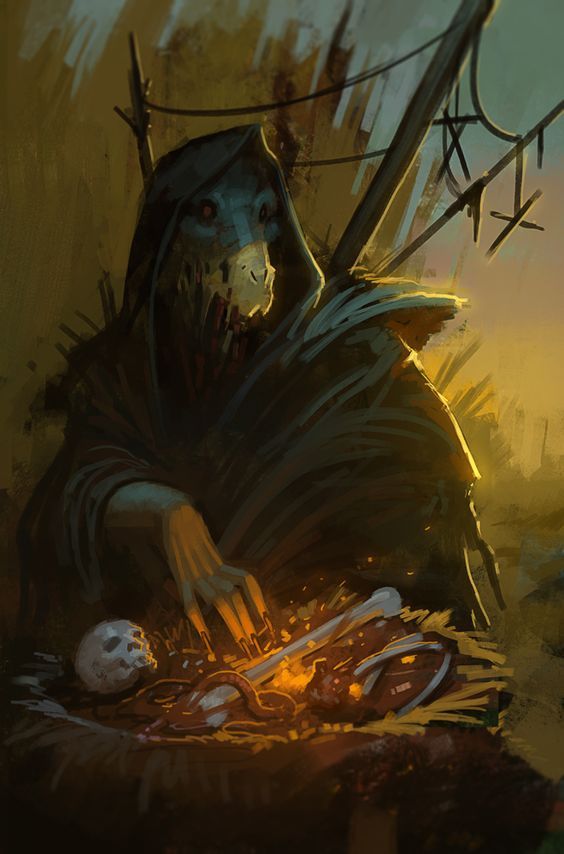 The Fall of Fortune

Netehiri was once great and powerful until greed and arrogance brought it to a cataclysmic end.   Read about the Shattering of Netehiri

'The Exiled' is a catchall term for those unfortunate souls sentenced to be branded and forced into the Surface World, never again to enjoy the sanctuary of the caverns below. Some band together to survive the harsh elements and horrific beasts, while a rare few survive for generations past their initial exile, like the infamous Third Eye Tribe.   Read about the Exiled

The Tribes of Ruin

Like rotting flesh draws maggots for feasting, so too has the corpse of the city drawn the lost, damned and desperate to shield themselves from the dangers of the Surface among its bones.

The tribe of the Cannibal Queen control the Tomb and with it, they hold the city. The other tribes hate them, but fear them even more. The Atakhara have lived for at least three generations in Exile, and have the mutations to show for it. They were like any other tribe until the Queen came to the city and with her strange power, they've come to enjoy a lengthy and blood-soaked rule.

A loose collection of Exiled, all of first generation with a few unfortunate lost prospectors and adventurers mixed in. United less by family, tribal identity or religious belief, the Wari only really seek to survive. A frequent target of the Atakhara's bullying, they are at the bottom of the social ranking in the city.

The oldest tribe and some of the first Exiled to have braved the blight-storms to find the shattered Netehiri. They held the Tomb and worshiped it as their god until the Cannibal Queen drove them away and claimed it for herself. They desperately seek to regain it to stand in the Tomb's shadow once more. 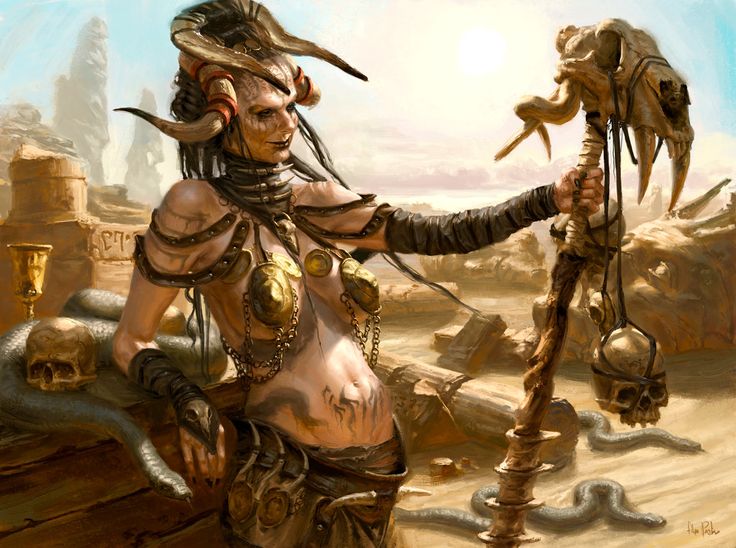 No one knows from where the Queen came, nor how she came to control the beasts beneath the Gorge. None dare ask.   It has only been a few short years since she conquered the Tomb and claimed the ruins, but her hold on power is becoming ever more secure. With every bloody sacrifice and every howling chanting sermon at the base of the Tomb, her power grows.   The other tribes fear and hate her, but they obey. Any outsider seeking to plunder the lost treasure of Netehiri must contend with her rule, one way or another. 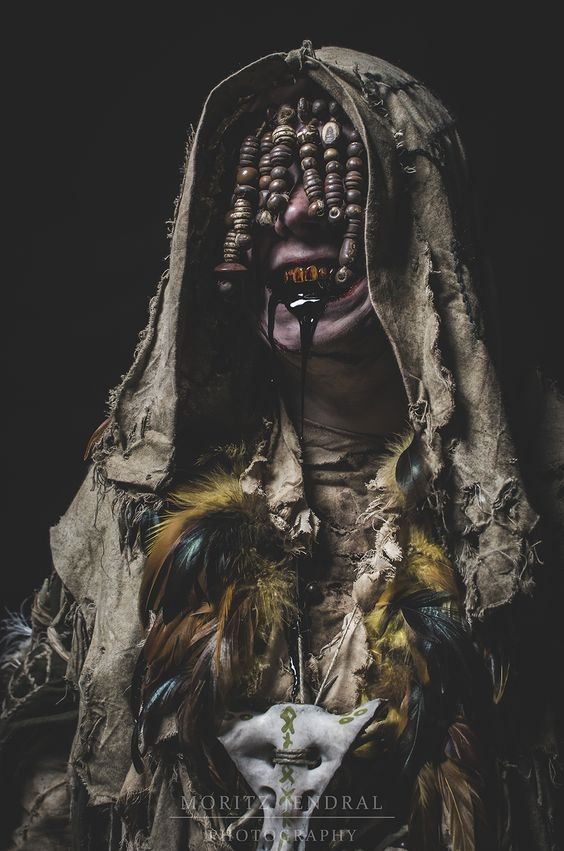 Answering: "Describe a building that was once a grand place, but is now ruined."
Visit Qurilion's Competition Page Check all other answers to this prompt Competition Homepage

Now that is some fine anthropomorphization if I have ever seen one. Also, is the choice to not make the "read more about"s article blocks deliberate? The gibbets remind me of a desert-land city from Bernhard Hennen's "Die Elfen", where young girls are sacrificed into the mouth of a bizarre effigy with a kiln in its belly as a regular ritual and cages and gibbets with minor criminals are displayed openly, letting everyone observe their thirst and slow deaths. One of the characters even gives one water, not realizing that he is prolonging his suffering.

The artistic pause here is pretty nice, but consider also making "And banquets." italic. This can really distinguish it visually, forcing the reader to perceive it with a different voice (in this case, a more sinister one). I believe Laughing Prophet does that quite well in his writing, so maybe something to look at as inspiration. His writing is top-shelf either way and worth checking out if you want to pick up a trick or two.

but her hold on power is becoming ever more secure.

I am not really happy with "her hold on power", it feels a bit off phrasing wise here. maybe... "but the power that now rests in her clutches grows less brittle each day."   Great read!

Thank you for the feedback! As always, detailed and useful! <3   I added the italics to banquets, and I am thinking about how I can rephrase the last structure.   I'm going to experiments with the blocks (now that you've so kindly shown me that!) and see how it looks on these articles. Thank you :D   And yeah; the gibbets are not good places to be under normal circumstances, less so in a radioactive wasteland, surrounded by monolith-worshiping cannibals. The way they used to display criminals in London way back in the day was definitely one of my sources of inspiration.

And a great source of inspiration for the grimmer side of life it is. As for radioactivity: heh, yeah so the water is going to basically just explode out of your body :D

It's effects are discretionary in this case: Exiled get radiation poisoning and cancer, and all around it's a bad time. But because it's a fantasy world and we want to tell more stories then that, there's your regular assortment of stranger effects, lower mortality and of course delicious mutations. :D   I updated it with your CSS trick for a bigger font too! Thanks so much for the help!

Oooooh. I like this. It certainly evokes a sense of bleakness that's very "dark souls-y" if you don't mind the term. It seems a very chilling and desolate place, a harsh city for a harsh region, and I like it a lot. :3.

I'm glad you like it! :D One of the basic premises was to flip the typical fantasy structure of the surface world/underworld and, well, this is the result.   Thank you for the comment!

Wow. This is dark. I like it. A map or thereof would have been helpful to understand how people get in there and where the Noose goes along and such, but it's fine.

Hmm, not sure I'll be able to wing that for summer camp, but I'll write that down as something to do afterwards. Having a rough map of how the different structures are all set up is a good idea. Thank you for the feedback! :)

This tribe sure have their protein intake covered ;)

When in doubt, CANNIBALISM!