You think you know hardship, but you know nothing.
— Imari, Dhanû Clan-Warrior

Cut in twain by a great serpentine river, Sheoin is a hard and cold region of the Inner Shell. There are more monsters than men here, with civilization clinging tenuously to a few outposts. Out of all, only one can be said to prosper and the rest can claim only to survive. Much of Sheoin is wreathed in an unnatural chill with some parts conquered by bone-like ice that bleed when struck. The things that live here have adapted and learned to feed from the cold like others might from heat. Weakness is quickly weeded out in this cruel, inhospitable land.

Sheoin is a land of vast caverns, winding tunnels and dizzying chasms to further depths. To get almost anywhere in Sheoin, travelers should expect to climb. The cavern grounds are often uneven, rising and falling perilously. When life sprung from the stone, it is tough and jagged. Fungi and mushroom grew in clusters around the few sources of heat, while stiff brambles and claw-like roots have learned to eat cold. There are paths in Sheoin that burrow deep into the world, reaching all the way into the Far Deep. These jagged pits are watched closely for visitors from below.

Where many parts of the Inner Shell are hot from pressure, geothermal activity and open wounds in the world where magma bleeds through, Sheoin is cold. Hives of living ice spires out of the ground across Sheoin, feeding off ancient and forgotten things. These so-called Blossoms spread a chill across the region and where they cluster in numbers, stone becomes encased in growing ice.

The Dragon is a great snaking river that connects Sheoin to the Abyss. It crawls across Sheoin and sprawls into countless tributaries along its twisting path. Most of the Dragon has a shore, either directly by its waters or separated by cliffs. There are places where the Dragon expands to fill entire caverns in its passing. The waters of the Dragon are bitter and chilly, with an unpleasant chalky taste. It isn't yet clear where the Dragon begins and the source of its water is shrouded in legend.

The shores along the Dragon's route are sparsely dotted with clusters of frost and ice. The water of the Dragon there freeze into a thick, black ice that can be difficult to see even in light. Such drifting ice can be a serious hazards to any boats that travel along the Dragon.

The Dragon ends its journey in the Abyss, merging with the subterranean ocean. For those who know the routes around the rapids and jagged rocks, taking a boat can be the fastest way into Sheoin.

Dhanû-Karr, the Land of Man

While the name of Dhanû-Karr is more statement of intent than reality, only this part of Sheoin hold any settlement of size - including the city-state of Dhanû. The Karr is spread unevenly across both sides of the Dragon and across the depth of Sheoin. It consists of the more accessible caverns where the ground is not so uneven and settlements can more easily be built. It is not so frozen as other parts of the Sheoin, with Blossoms mostly scattered around the perimeter or a few stronghold-like clusters deeper inside. 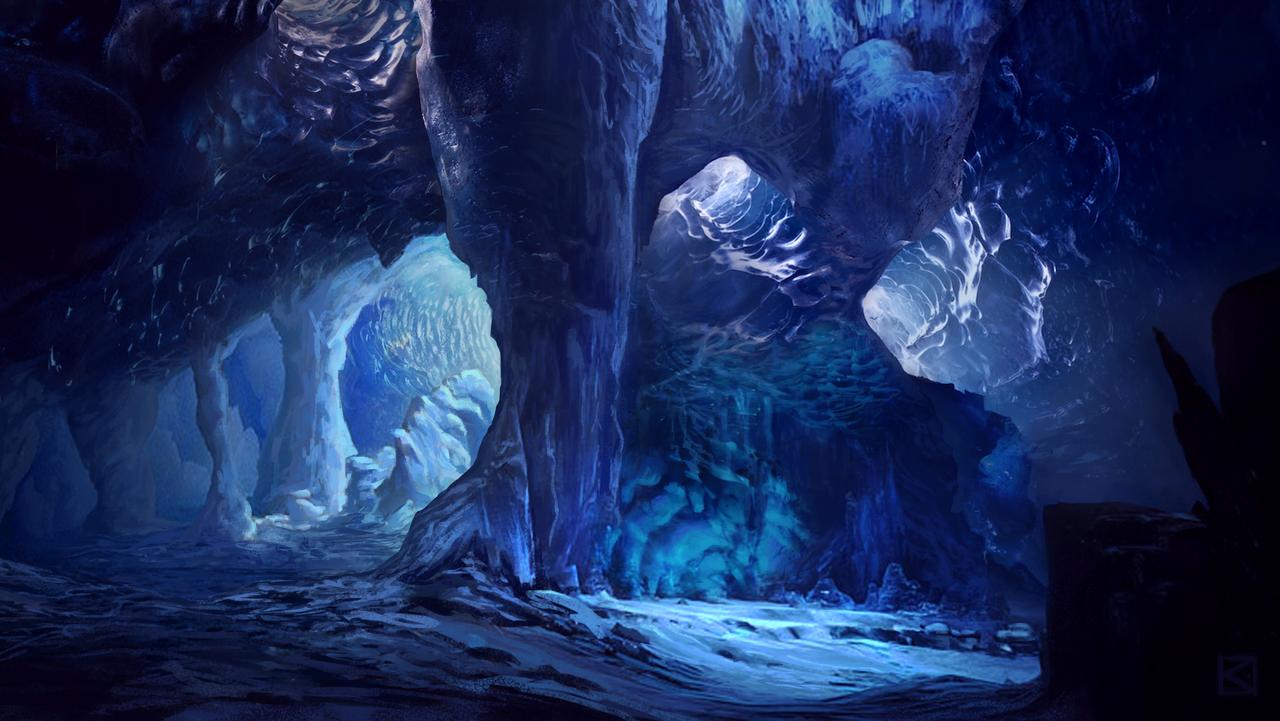 by Scott Kaser
Even so, much of Dhanû-Karr is uneven and broken. Many of the tunnels that lead across the river or into other parts of the Karr pass well outside its boundaries and into dangerous domains. Plants and fungi that have adapted to the cold form rare sanctuaries for beast and men, while glow-vines and grasping roots cling to the cliffs by the Dragon. Despite their claims on the land, mankind are only one player in Dhanû-Karr. In the wild, the cold-spreading Blossoms compete with nomadic predator over the land. Over a season, the borders of frost can change dramatically as Blossoms are slain and devoured, before new ones can sprout from the stone.

Beyond the Karr, the caverns of Sheoin have been conquered by ice. These regions are shrouded in cold, with Blossoms gathering in great colonies. Humanity has no presence here and even the beasts that roam Dhanû-Karr do not go into the Lost. Some of the Lost was once within the Karr and the bones of long forgotten cities lie deep within the ice. On occasion, someone ventures into the Lost and return with wealth or trophies wrenched from the cold. Most do not return at all.

by De Gerardo
The Lost Lands wrap around Dhanû-Karr in all directions, except for beneath it. The further towards the Far Deep the caves go, the less the ice holds dominion. Travel across the lost is sometimes unavoidable and the fastest route between separate parts of the Karr is sometimes through the Lost. Every year, the borders of the Lost close around the Karr and strangles another inch of cave beneath cold and frost. 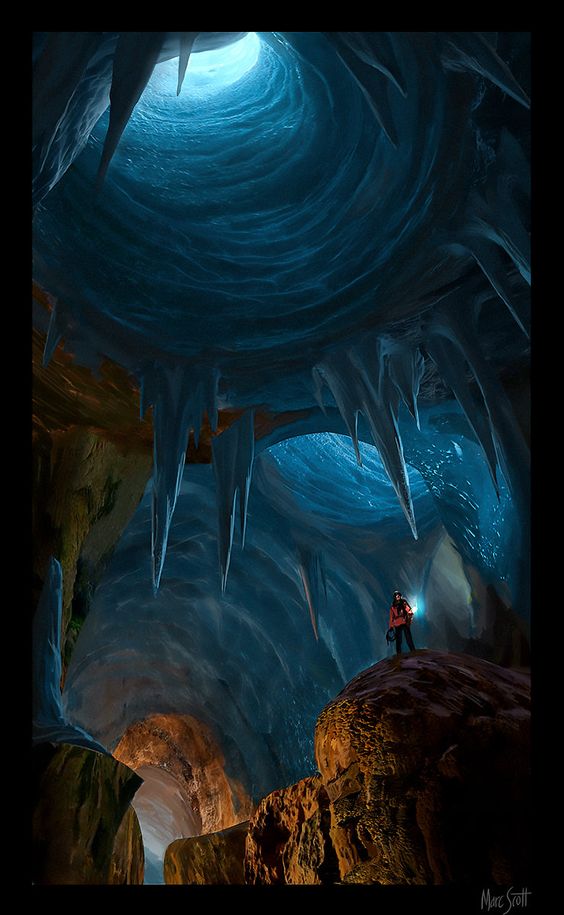 by Marc Scoll
The lower parts of Sheoin consists of a series of descending caverns of increasing size. These lead directly into unknown parts of the Far Deep, with vast passages burrowing deeper into the dark. The caves here are warmer than above as the spreading plague of cold quickly ends near the Descent. It makes the caverns there more vibrant and more hospitable, with only the things from the Far Deep preventing intrusion.   Mushroom and fungi begin to flourish here, away from the cold. The great vertical shafts corkscrew downwards for miles and the sound of beating wings resonate throughout the dark of the Descent. Explorers that have climbed the Descent claim that the maze of tunnels only grow in size and that great horrors live in them.   Despite the dangers, foraging expeditions frequently brave the Descent for food, Hattick and other supplies. Such expeditions can last for months, if not a year or two, before returning.

Sheoin is a land at war with itself, where the competition isn't just about food or survival but to shape the region. The strange Blossoms radiate frost and cold, forcing others to adapt or flee. Other beasts fight to keep their territory or make the hives of living ice into prey. Others still have come to form a symbiotic relationship with the Blossoms, feeding off the chill to survive. Such creatures commonly have long limbs made entirely out of bone or carapace, or strange poisonous blood that help ward off the cold.

by Rock Cafe.info
As such, Sheoin is more lively than it first seem. There are things in the Lost that thrive off of the freeze or on things lost in the cold. Hungry beasts roam the Karr or wait in ambush for those who try to cut through the Lost for a quicker path. Life in Sheoin is like nowhere else in the Inner Shell and it is perhaps the only place where fungi are not dominant.

Demon or god, it doesn't matter. They kill and die, all the same.
— Imari, Dhanû Clan-Warrior

Humanity cling to what lands they hold in Sheoin. The dark and inhospitable land is cruel to the unready. Dhanû wage a hunter's war to keep the frost from spreading into critical tunnels or farm-caves, and they are losing. Worse, the enemy they fight seem to be learning and warriors find entire passages walled off with crude fortifications made from living ice. Sheoin is being swallowed whole.   Nearly all human settlements are limited to Dhanû-Karr, with the most populous one being Dhanû itself. Most other towns and villages are clustered around some vital resource, most often around a farm-cave or along the Dragon. Foraging and hunting are vital to the survival of all who live here and are treated with reverence. Hunting in particular is something commonly left to warriors, with all the dangers of Sheoin. Other expeditions strike into the Lost, killing or destroying Blossoms.

by Rock Cafe.info
Time will tell if humanity will be able to hold their ground or be drowned in the inexorable tide of ice.

The Inner Shell   Sheoin lies in the Inner Shell, the region of caverns well below the Outer Shell and the Surface. Here, the cavernous halls grow vast and the tunnels labyrinthine. Most life in Araea can be found here, fighting to survive in an uncaring world of stone, fungi and darkness.   Read more about the Inner Shell 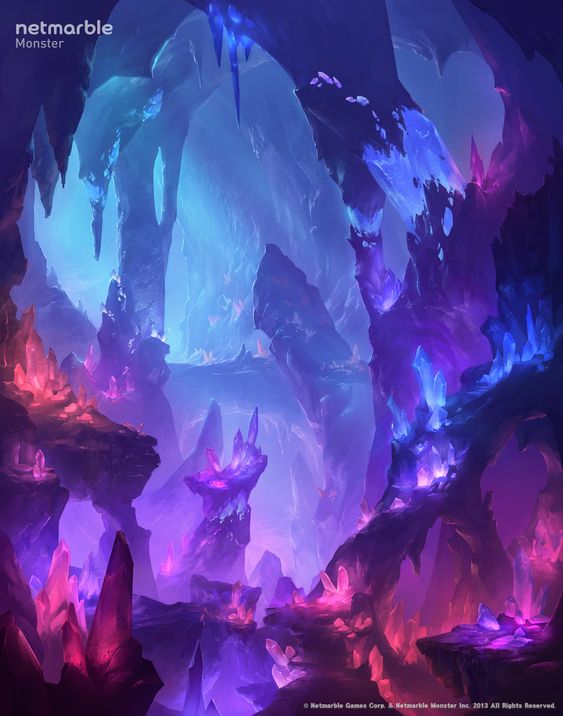 An impossible structure, untouched by the creeping corrouption that surround it.

Isolated and alone, Utomo stand at the front lines of a war that warp the very land. Through bloodshed and hardship, the Hunter's Home remains unbowed.

Izhaso, the Forge of Bones

These forges sing not with iron and steel forced into shape, but with the bloody corpses and slain monsters made into arms and armor.

Beyond humanity's feeble grasp in the Sheoin region, alien powers hold sway. It is a land of frost and cold, blooming from gardens of monsterous blossoms.

You should probably make it a bit easier to access the regions articles. I only found this by first going through the Dhanû pages.

Have no fear! Once I'm through Summer Camp, I'm going to go through all the articles I've written for it and do an organizational pass. :D

Neat! I also found a few articles with links to placeholders despite the should-be-linked already being done. Once you goin for it pay attention to those as well ey?