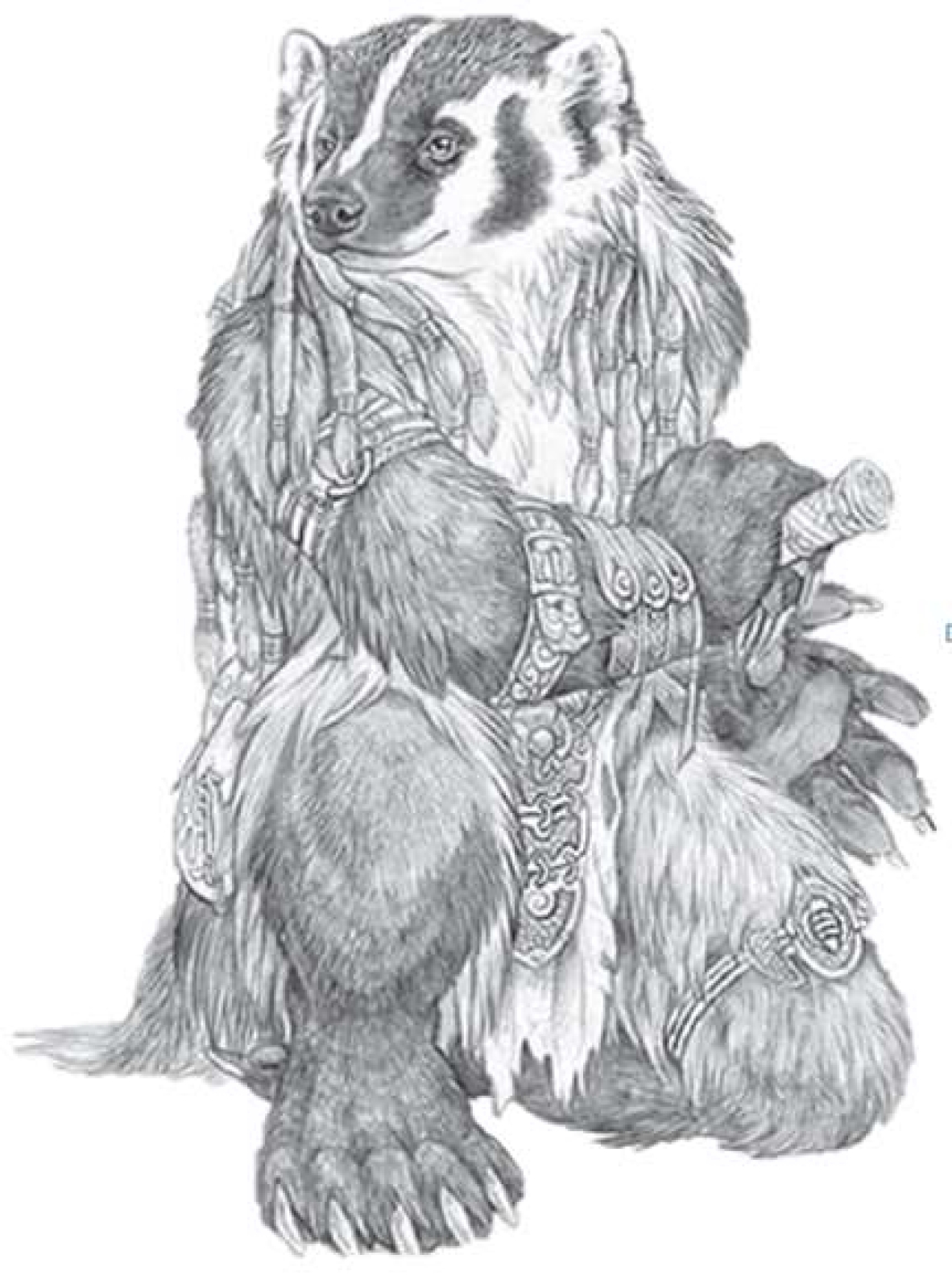 Badgen are a race of anthropomorphic badgers. They live on the Dragon Turtle Hyna Yilane, she is mostly covered in forests. They are nomadic rovers, many with a natural wanderlust.

They often visit nearby shorelines to raid and/or trade. Often looking for new lands to settle, but sometimes just to explore new locations.

Badgen have long, weasel-like heads and small ears. Their tails vary in length depending on species; some have a very short tail, while others can be up to 20 inches long, depending on their age. They have black faces with distinctive white markings, grey, black, brown or red bodies with a light-colored stripe from head to tail, and dark legs with lighter underbellies.

Badgen prefer other badgen for reproduction. They tend to have 1-2 children at a time, gestation can last 6-12 months. After 6 years the young transition into adults and are able to have young of their own.

A rare few liaisons between Lutra have been known, as their races are sometimes compatible.

See half-orc tables in the PHB.

Any temperate, but most live on the Dragon Turtle Hyna Yilane.

Badgen are mostly omnivorous, they love a good meat and vegetable stew or pie.

Their society is based on a military structure, with equality for all (race or sex). Their women fight alongside the men. Leaders are often fighters/barbarians. They have a racial hatred of all goblinoids, because this race enjoys killing indiscriminately.

Some Badgen hire out as mercenaries. The often like to prove their prowess in battle.

Their features are a little broader but with a shorter snout than a traditional badger.

They mostly live on Hyna Yilane, but have been known to settle in any temperate area across Aquatica.

Badgen are very intelligent. They have magic users but don't believe in using it in battle, as it is against their code of honor to use magic when others aren't. They prefer hand to hand combat than ranged. Badgen are excellent weapon smiths and will imbue their weapons and armor with magic.

They believe in gender equality, to them there is no difference in the sexes. Merit, skill and honor all play a part in your station in life.

Women bear children which is thought to be a very important role, but they aren't relegated to just that. They can fill any role that they have skill in.

The female chooses her mate. Everything depends on the female and her family accepting her suitor. He needs to earn her hand by showing his honor, strength and courage in various ways.

Badgen believe in family unity and strength, but male badgen past puberty are often afflicted with a wanderlust and yearning to prove themselves in battle. Two male badgen under one roof can come to blows because of the fire in their blood. In many this develops into the bloodfire (battlerage). When this develops one male must leave.

They are excellent craftsmen especially with weapons, armor, stonework, and boat-building. Their architecture and art is stunning to behold

Their major language is Badgen, but Lutran, common and others are known.

Badgen are often stoic and solemn, but they can also be jolly and quick to humor. The are friendly to others they meet, and they hold honor, fairness, and justice as their highest ideals.

Common clothes worn are kilts, vest, blouse, skirt or dress, of course depending on their vocation.

Their society is like a combination of Native American, Viking and Pacific Islander (Maori). It is nomadic, rough and tumble.

Badgen as a race were created during the Chaos Wars. A group of humans were fishing off the coast of Animus when a Wild Magic Storm hit. As a result they were fused genetically with a sett (colony) of badgers.

In the confusion that ensued they, drifted at sea and crashed on the Dragon Turtle Hyna Yilane. She guided them to create the society that they became in the current day.

Moritasgus the Great Badger of Healing is one of their Gods.

Lutra are one of their closest allies. They have good relations with most honorable races, mainly the animalfolk, elves, gnomes and fey. The Badgen and Dwarves and are in open competition for commerce and resources.

They distrust most Atlantians and their descendants because of the ramifications that have happened to Aquatica in the aftermath of the Chaos Wars.