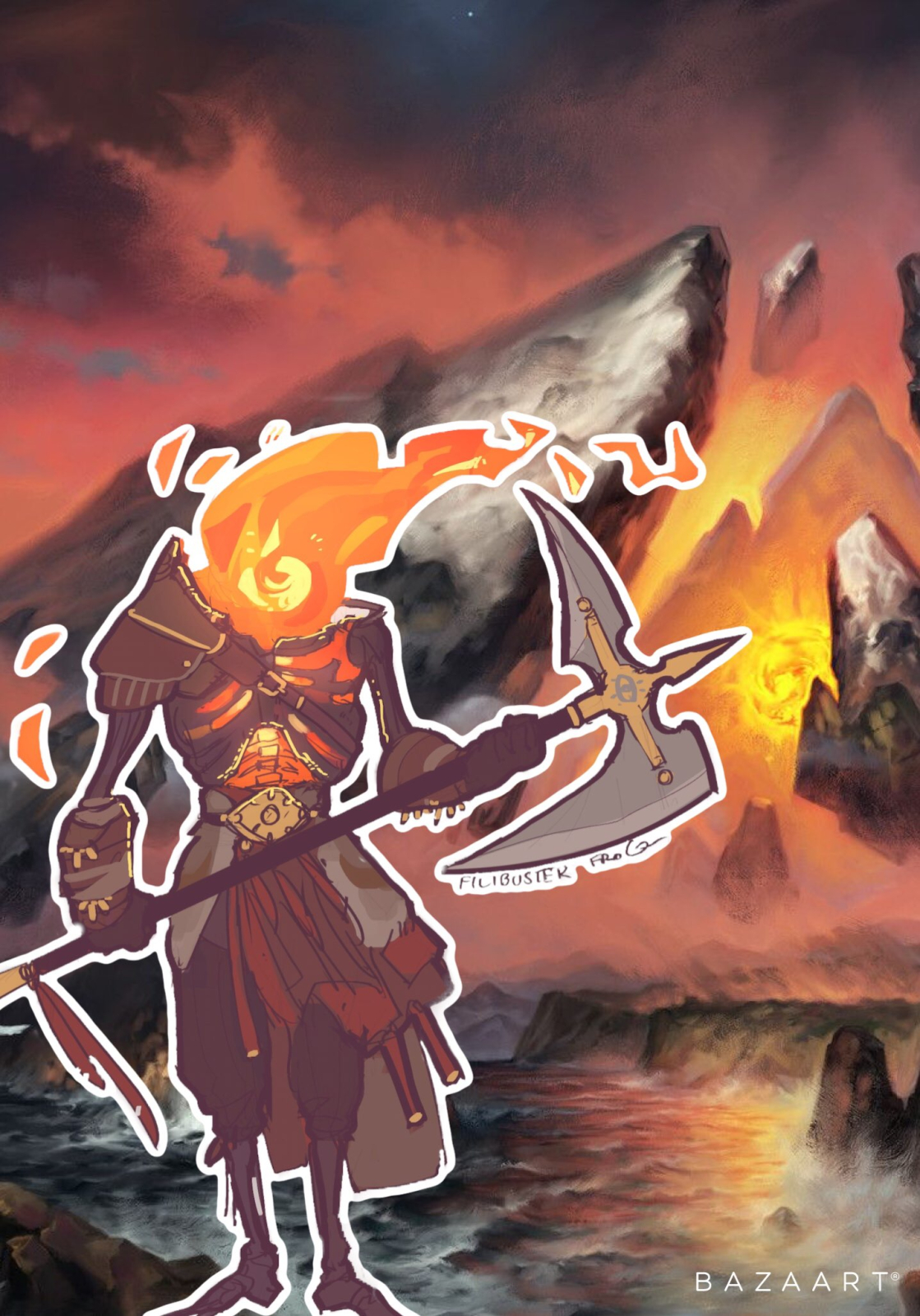 Whilst most Avatars to the Gods follow their exact orders, I am different. Sol understands the balance of control and freedom, him mostly of all beings. He sees us, he knows that man cannot be controlled, which is why I am here. I am here to keep people free, yet not in the hands of chaos. He lets me choose what to do in his name. He may be fine with your interventions, but I am not. Flee now, or face the blazing glory of the Sun-Chosen!
- Ílios, to the Fallen Demigod, Rory

Ílios was born a mere mortal once, a barbarian of the Sea of Sands, who lived in isolation from most barbaric tribes. Ílios spent his time studying the lore of the Sun God, Sol, and his life. This included his family, dogmas, and soon managed to piece together that Sol had not been a god forever. He soon travelled around the South Pole to find the hottest place, soon finding himself in the ashen mountains of Volcanic Lands. To prove himself, Ílios stood over the magma pool of the lands, and demanded an audience with Sol . To his delight, the Sun God came, and offered him a role as an Avatar for his valour, and also seeing his true thoughts on the world. However, Ílios would have to rise up the ranks for his god, becoming a war cleric in his name.
Across several hundreds of years, Ílios was given great powers for his work. He managed to make Sol a well known deity across the South Pole, and fought off monsters of the dark. He was soon given the name, Sun-Chosen, by many of the locals of Volcanic Lands. He was seen as a hero for many of the poorer people of the volcanoes, as a saviour from fire elementals, red dragons, and azer warmongers. He even served as a councilman for 12 clans in a northern mountain range. His life was long lived with many deeds of good done.
However, as all things do, his life would soon come to an end. After a war against a fire giant dictator, Ílios was left wounded, close to death. He walked 5 miles, back to his home, where he rested his body in his gardens. He was given audience of Sol and Solis , for his final moments of being human. Ílios soon died, and Sol decided to bring him back, as the first Avatar of the Sun God.

After being reborn, Ílios was given the strength of Sol directly. His body was engulfed in live flames, and his head encased in an orb with the power of a star. His axe became a legendary magical weapon, as well. Ílios' first order of business was to save a clergy from a horde of undead. He made quick work of the undead, alone, despite being outnumbered 2000 to 1. This was when this divine being was first marked in history as an avatar to the Sun God. The avatar made the lives of followers, and kings to growing nations better than before. People could rejoice on living life to it's fullest, since Ílios could save them from any enemy. Times were good.
This continued on for 50 years, Ílios' purpose was to just save people who needed saving. Though Sol wished for a higher purpose for his avatar. Ílios was tasked with entering the Shadowfell, the dark realm. He spent 5 years travelling it, given the task to find the Nightwalker Anarchist simply known as Mordavi. This was the only time Ílios failed, as he was soon banished back to the material plane. In order to atone for his failure, Ílios offered himself tribute, to be killed by the Sun God for his failure. Sol declined, to the disagreement of both himself and his youngest daughter, Solis .


A fated battle of gods

Later on in his life, Ílios was locked in a magical prison by Baphomet for 20 years for adventuring in the Abyss. After he escaped, he learnt of terrible news, that Solis, his close friend, was slain by a group of adventurers, manipulated by the first born son, of Sol, given the fake name of Rory to hide amongst adventurers. Ílios demanded vengeance, but when he had managed to go after the demigod, Rallaster had already captured him, as punishment for stealing his domain. The fell demigod, who's name was soon revealed to be Anatole, was given an eternity to be tortured.
However, Ílios wished for more pain to be brought down on Anatole. His crimes could not exclude death. Ílios decided to bargain with the God of Torture, and had managed to get Anatole removed, and placed on an asteroid in the grand emptiness of space. The Sun-Chosen challenged Anatole, and a long, drawn out battle between a man with the strength of a god, and that god's firstborn erupted. It ended with the asteroid being destroyed, numerous ships being torn apart, as well as a long forgotten nation on a distant planet. It had ended with Ílios bringing Anatole to the closest star from the star sign of Distiel , which depicted the edge of his lance. Ílios had thrown Anatole into the star, causing a multiversal shockwave, echoing for generations, before launching himself towards the star too, holding the badly burnt demigod to it's surface. He pulled him out, and revved up his fist, with the power of all of the new gods behind it, and punched him through the star. The star soon was destroyed, a large hole through the body of gas, until it was magically layered with rock, and mantle, forming a new planet, called Ilitole. This marked when Anatole became brain dead, since it was impossible to permanently kill a demi god. His corpse still floats around space to this day, a warning to any, and all, to not enrage the Sun-Chosen. 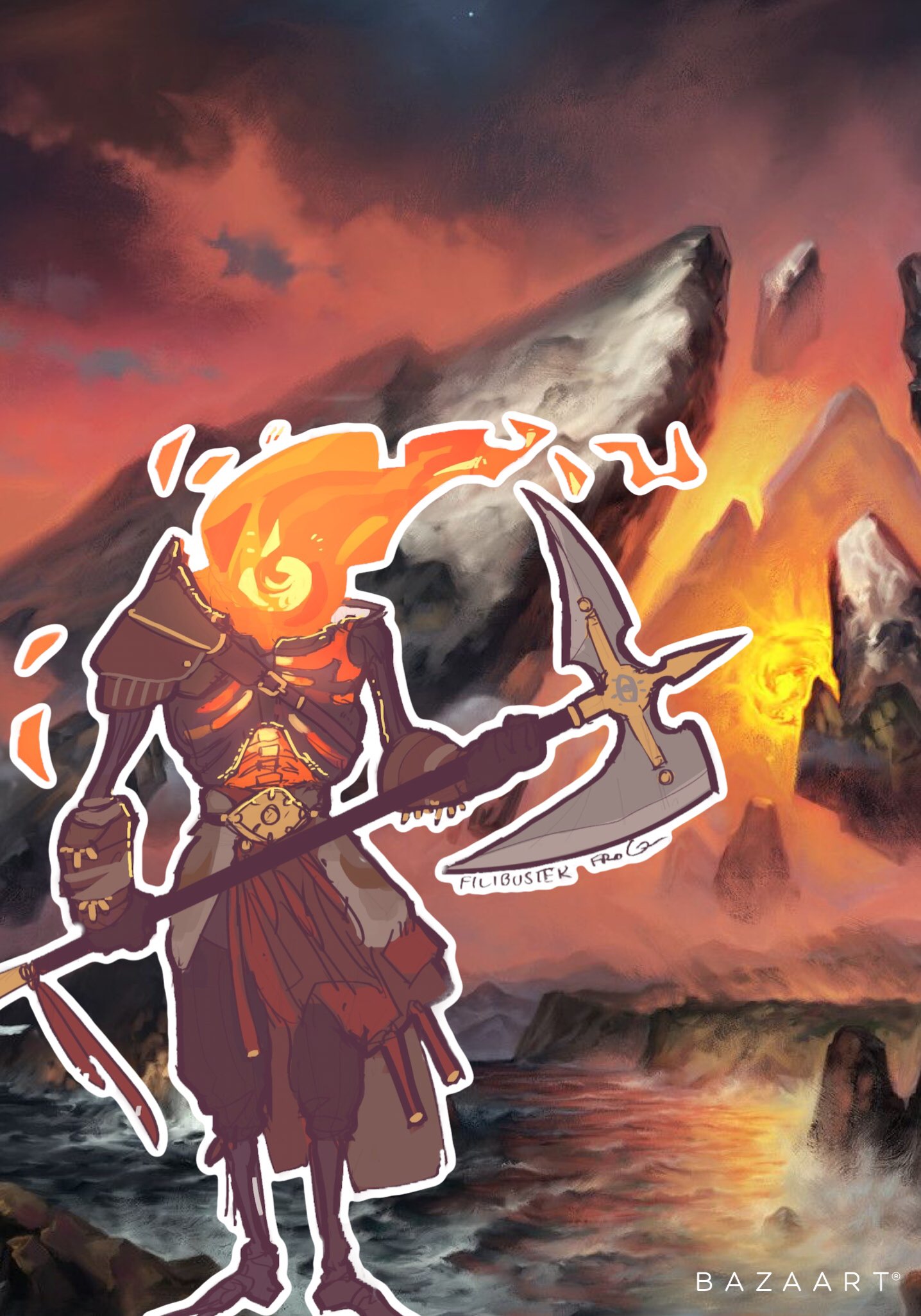 Weapon (great axe), legendary (requires Attunement by a barbarian, any good alignment)   Spanning roughly 9 feet in length, this large double-headed great axe is always warm to the touch, and the blade itself emits searing heat. Made in equal parts gold and steel and forged in the breath of a gold dragon king, then cooled in holy water, this weapon is considered really heavy for its size and it slashes through flesh and bone alike with eerie ease. However, only the righteous are allowed to wield or even move it. You have a +3 bonus to attack and damage rolls with this magic weapon. A creature that is not of a good alignment treats this weapon as though it weighed 10000 lbs for the purpose of physically carrying it. It remains its normal weight when stored inside a bag of holding or similar magic item.

This weapon has two blades: one heavy and large, the other small and light. The large blade deals 1d12 slashing damage on a hit while the small blade deals 1d8 slashing damage. Whenever you make an attack with this weapon, you can choose to use either the large blade or the small blade for the attack. In addition, whenever you take the Attack action during your turn and use the small blade for at least one of those attacks, you may make an additional attack with the weapon as a part of that action. Rolling a 1 or a 20 on this attack does not cause it to automatically hit or miss.

When you first become attuned to this weapon, choose from either fire or radiant. This weapon deals an additional 2d6 damage of the chosen type each time it hits. Whenever you make an attack with this weapon, you can choose to change your choice before you make the roll.


Full Release of the Sun

The weapon has three charges. As a bonus action, you can expend one charge and engulf the head of the axe in brilliant white flames for the next minute. Choose between fire and radiant. The next time you hit a creature while the axe is aflame, the flames explode outwards in a 15-foot cone originating from the axe. Each creature in the cone must succeed on a DC 18 Dexterity saving throw or take 2d10 damage of the chosen damage type. The creature hit has disadvantage on its save. The weapon regains all expended charges daily at dawn.

Remove these ads. Join the Worldbuilders Guild
Volcanic Lands
All Images and Other forms of content do not belong to "Sai" and to their respective creators. I (Sai) do not pass off any images or inspiration as his own, and uses them out of recreational uses for Dungeons and Dragons 5th Edition Sessions. All things used from www.dandwiki.com belong to their creators. If you are one of the creators of something I have used, please get in touch in any way possible. All Crossover material belongs to the creators and are made for entertainment use.
Article template
Character
World
Abholos
Category
Volcanic Lands in Geography
Author
Sai_
Publication Date
3 May, 2022
Creation Date
30 Apr, 2022
Last Update Date
3 May, 2022
Visibility
Public
Views
91
Favorites
Comments
0