God of the adventurers, cities, civilization and solitary fires.

The Giants adorned the skies with a wreath of lights. Pinpricks more numerous than the grains of sand, yet further to reach than the dreams of a child. Yet, if it exists, it can be reached. We can reach it.   Through the drums and torches of armies, as they trailblaze the path. The dreams and hopes of Settlers as they pack and fortify the roads that countless more will follow as they did. The Carriages and Commerce of Merchants, who will traverse these routes like no others. To and fro, readying the outskirts of the lands to be as the places they come from.   In time, those pinpricks of brilliantly lit sand will be ours. The stars will be connected, with roads to and fro. Merchants going where they always go.   The merchants follow the people, follow the armies, follow the explorers, follow the maps, follow the dreams. In time, the dreams of a child can be reached and the stars in the sky will be seen.

Of the Pantheon, one being truly stares across Arydia and plots for the future. The future that none else think about. When the towers of Araetule are commonplace and the fear of starvation and war are muted. When the lands of Ithungsida are struggling to cope with the people that thrive upon it. When those same people look elsewhere for their future. The Funeral March was only a beacon of times to come, a sign of what could only be forestalled yet never avoided.   In that, he plots and prepares. Guiding his followers to expand, to prepare, to push that bleeding edge of civilization. His followers number in all that live in those great cities of the world. All that have changed routines from that of learning the ways of nature and began learning the urban stalk. The urban walk, the navigation of cities, the flames of heaters and forges.   Those that maintain order therein and promote the healthy growth of civilization. That maintain the cities and the lived-in places, that help to propel the eternal advancement. From the guards to the governments, to the artisans and the criminals. The true variety and beauty of a city is upheld and curried by all factors working in synchronous. Even those with reputedly asynchronous aims. Any one group stepping too far out of line brings the decay of civilization.   However, he has a special place for those that live in the least hospitable places, far from the comfort and advancement of the cities. Those adventurers that stalk ahead, that map the unknown, that prepare the frontier for civilization. Truly, he loves adventurers. And he is known for blessing the flames of those lone fires that are lit deep within the wilderness.

The Followers of Rogalev as an entity are clear on their purpose and seek out to aid in the fulfillment of their deities goals. Thus they strive to be among the elite of the various nations, grow close with leaders of influential groups and above all; remain in contact with the army of priests that seek out the will of Rogalev. With a constant drive to please Rogalev remaining a consistent attribute across his followers, the amount of those that have received blessings from him in terms of power are greater than that of other deities.   Indeed, the priests of Rogalev are the most populous of all the gods. With temples and ways into most any city or environment. They are always present in the aftermath of the worst disasters, to help clean up and rebuild.

Settlers, Adventurers, businessmen and those that work in Administration all hold some sort of note to Rogalev. Thanks for the favor, requests for blessings, or just the mere hope for the future. "Let the light burn forth through the nights." Worshippers of Rogalev often bring lights to sit outside of their homes or camps. To fulfill the requests and demands of Rogalev, so that he might see them in their times of need.

A Human with a bright smile and well made clothes. Generally depicted with the blue eyes and lighter skin indicative of an Alluvian ancestry. This does change slightly from culture to culture, as well, older records have a number of different depictions of the deity. Some even recounting visitations by a female Rogalev.

Rogalev hoists a torch into the sky, not prepared for battle or for the illumination of some unknown location; but to light the path for those that follow him. In this, he is represented. Either through his torch or a number of tools overlapping one another.

Your light radiates to those that follow. It shows those who seek it, a pathway to walk. A place to strive towards. A new life to settle and new lands to absorb. In this Rogalev expects you to see him and aid him in his goals.
— Priest of Rogalev.

Those that follow Rogalev understand the necessity of law, of order, of growth. If all is chaos, if there is naught to the world but what is seen. Then to tame it and spread is the destiny of intelligence. Those that are blessed by Rogalev often fall under one of these domains.
City, Forge, Knowledge, Order
Rogalev's Thoughts of Other Deities
Firn, the Chilled Halfling The order of community is easiest kept with a sense of community permeating it. Utilizing the ideals of Firn to allow the groups to form and espouse communal living and thought while equalizing themselves in comparison to others in their bracket makes for a solid framework of order that is kept in a long term. Generational Communities are the best laid foundation for this, also the culmination and careful work on “Culture.” All in all, a tool fit for use.   Chando Meywa, the Distant Locus The drive for adventure is a good thing to cultivate. The meaning of advancement Chando-Meywa utilizes in her ‘hunts’ gives her an edge in moral standards over Karan, however, both have their place in the culling of the unfortunate. The Information that does return can be muted and controlled in it’s dissemination to be worse than useless. If done right, the scholars get a new scroll to pore over and the masses never hear of it, this is the most efficient approach for maintaining order.   Karan, the Spelunking Half-Elf Karan’s drive for adventure taps into the very being of the spirit. As it is called to some degree, the DraKaise. Awaken in the wrong manner, and you get a warrior who fights for their heart and understands the world as it is. Should the thread be manipulated to a fine degree, the warrior instead finds the call of the adventure for the prosperity of their home. The culture making its mark and taking the pound of flesh it is owed. Karan driving home her hopes of fame and fortune is a beautiful way of manipulating this thread in the perfect manner.   MeyGana, Roar of the Sea Trade is essential to a city. MeyGana assures that, and helps to protect it. As such, she is a valuable asset, not quite like any other. She is also volatile, due to the control and aim of her storms that wreak true havoc among cities besieged. While this is a necessary portion of growth, the control is lacking and the ability to cut of the correct limb is completely absent. In general, MeyGana is a fine tool, but unpredictable in it’s correct usage.   The Raven Queen The Queen is useless beyond the hope of cultural cultivation. Her sabotage of the use of undead will stain the worlds for countless years. She has stymied progress and is an unsuitable tool.   Plospryn, The Thaw of Spring: The Happiness is a tool to be cut away. Too much are cities turned to gluttony, her presence overwhelms the natural order brought by the careful application and understandings of the ways the world works. She refuses to understand this and merely cheers on anything she can. She is also a tool that is utterly unsuitable for use.
Rahz-Pluoht, The Fiery Blade: Rahz the warrior, he fights along lines drawn in the sand. And seems to have no compunctions over it, as such he is a fine tool for population control. He helps to establish and maintain order at every juncture. His true power is the surge of energy he gives the men he blesses. His body and form have within them the perfect tools for the control and management of civilization.   Garma, the Halfing of the Hearth The Hearth and nightly meal, warmth in the winter and food that otherwise might be missed. While the cultivation of culture is a strong suit, the base availabilities of his understandings are a solid application of control and use of the forms available. He can’t help but bless those under his meal or near his hearth, so those placed there are best off. This allows for a population grown carefully to respect and understand the order of the world.   MasToch, the Dwarven Flame The Celebration is a fine tool as well. One that has grown the dwarves to a great amount. The application of celebrations can help control and emphasize cohesive times for breeding and the regulation of happiness and celebration outside of them. Used correctly, this builds culture and allows the benefits of mass homogenization to help hold a standard of order.   Armide, the Sun Spider Armide is decay. Another useful tool. He shows the weaknesses in civilization and aids in the destruction and rebuilding of the needed areas. All will fall, but it will be built up to a stronger degree. All can and will be utilized in the expansion of civilization.   Hextank, Ascendant The Metal Being is a representation of civilization itself. A defender and protector who does not sleep and can hold off entire armies on it’s own. It is the future and the use of it’s gospel is key to advancement, and holding away the truth of advancement.

Rogalev has many favored days across the spread of the year. However, the two he favors the most are: The Second Call and The Days of Writing.   The Second Call: The first call is the release of those adventurers and explorers who need to meet the breaking of winter head on and will get to where they are going first. The Second Call is two weeks to a month beyond that when the travelers, traders and couriers set out to make their traverse upon far stabler ground. Celebrations are far larger as cities rumble and truly awaken from winter.   The Days of Writing: Upon the first frost of the winter, the passes begin to close. The final travellers rush to test their luck on the imperiled landscapes, while the rest begin cataloguing the fortunes, profits and reductions afforded to them this year. Generally not a celebration, inasmuch as a marking of record. This is generally denoted as the end of the fiscal year for most businesses. 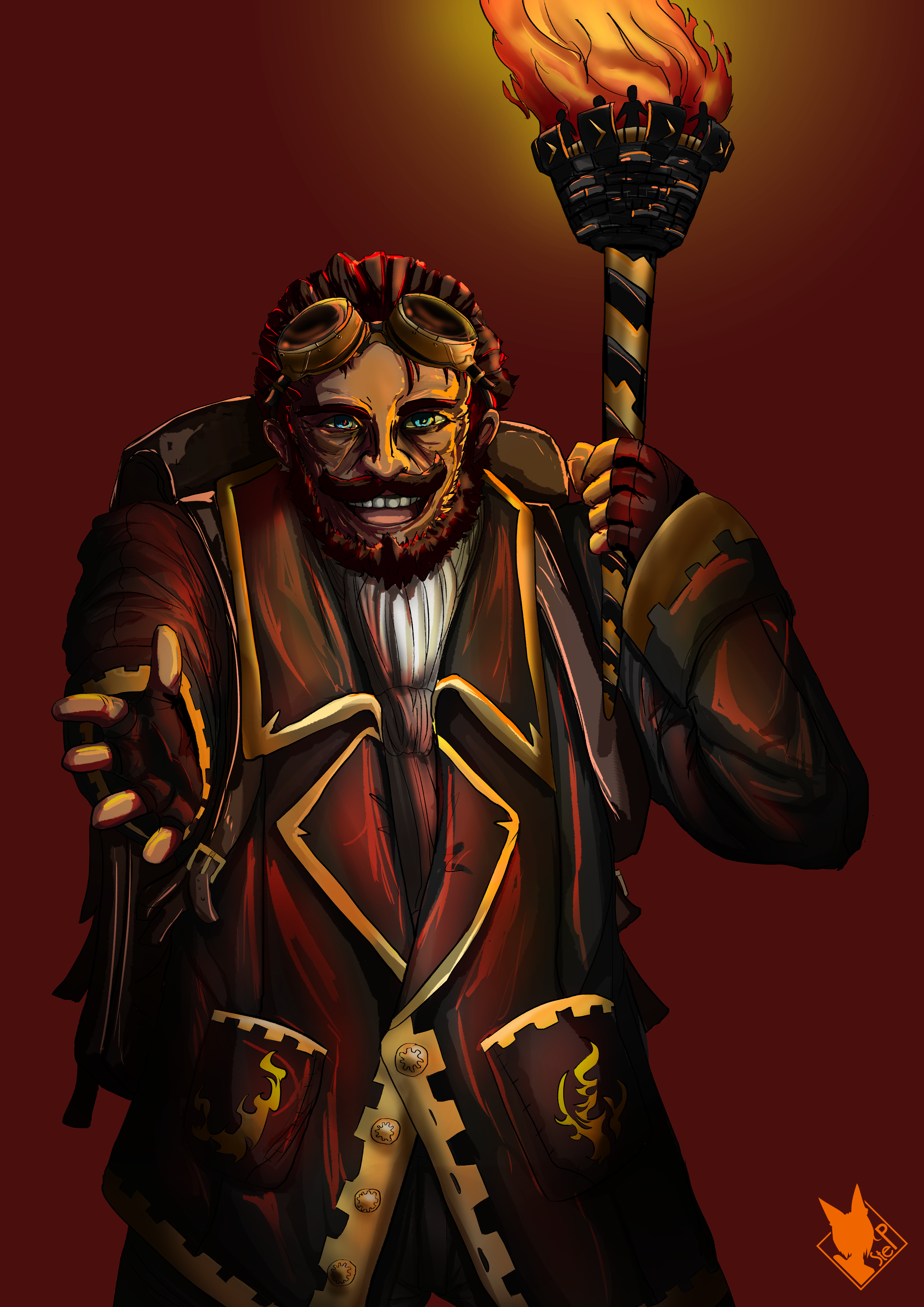 Divine Classification
God
Alignment
Lawful Neutral
Current Location
Ithungsida
Species
Humans
Ethnicity
Alluvian
Honorary & Occupational Titles
The Protector of adventurers. The Defender of cities. The Vangaurd of civilization. The guardian of the solitary flame.
Children
Presented Sex
Male
Quotes & Catchphrases
"I will not march against civilization, if I did, then what would my purpose be?" ~Rogalev, the fall of Araetule.
Aligned Organization
The Technologically Gifted of Araetule
The Fire Giant of the South 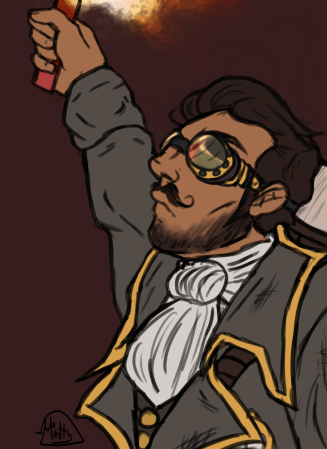 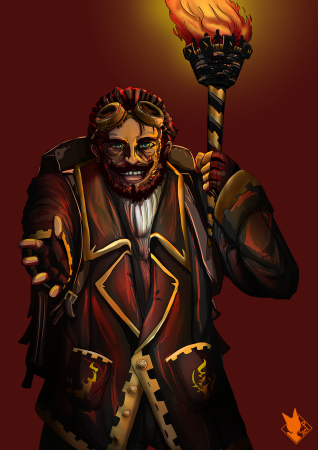