For you have been appointed by Heaven to rule the Earth and this beautiful lands, and to deliver to the unjust the righful justice of the god Abbina. Yours is now all that is below the sky: the earth, the mountains, the rivers, the lakes, the seas... . Oh Great King, king of kings, appointed and blessed by the gods, rule us with wisdom and make your kingdom prosperous and poweful.
Words of the Great Sage Vurpsena, Chancellor of the King, during Arsakes coronation (they would become the sacred words delivered during the coronation of every Great King of Seria)

Reviered and envied by many, and also feared by their enemies. The Seris Emperor is perhaps the most powerfull ruler en Yeia ( now that the Ikarian Empire has dissapeared and their descendants are bussy trying to restore its past glory). A wise ruler should be smart enough to not anger the King of Kings, the one appointed by the Gods to rule all that lies below their holy residence, as they command vast armies and have almost infinite resources.

At night I spend the time looking at the sky.   How all the stars and the moon seemed to all look at me,as if they were welcoming and be glad of my sudden appereance. As if they know that the ruler of all that is below them has finally show himself in this dark night.   But as glorious it might be, the weight that my shoulders support is heavy as also one is the servant of the people,his protector and hid judge. So the crown of a thousand jewels sometimes turns into the joke of the cow, the chains of an slave, following his master's orders .     Asurlan I, Reflexions on a Tranquil Night. Written in the 3rd century AP

The heirs to the Seris Throne  (usually the eldest son), are educated specifically for becoming the next rulers. They are  tought by the best teachers and philosophers of the kingdom that would teach them things like ethics, the classics of Seris literature and philosophy, poetry, rethoric and when they reach the age of 15, they start military training. They are usually trained by a close relative or an officer of the Imperial Guard. If the Emperor decides to go personally on campaign, the prince usually accompanies him to learn the basics of army management, strategy and logistics, and to learn from the best generals of the Empire.  When they reach adulthood, it is possible that the emperor gives some title or office to the heir to the throne, usually command of a province, in order to him to learn how to rule the land and face the problems of the population.

To be chosen as Seris Emperor one has to be male and belong to the Imperial Dynasty. Usually the eldest son is the one that inherits the throne and because of that he recieves the best education ( philosophy, poetry, politics and warfare).
As not many emperors actually campaigned and direct the military operations in the field, the most important trait for a Seris emperor was to be fair, and to be a good administrator that would understand how the administration worked and how to deal with the problems of the Kingdom.

Once an Emperor dies or abdicates(the latter is not very common), the new Emperor is solemnly crowned at the Throne Room of the Imperial Palace. The ritual is very encoded. First, all courtisans, ministers, generals etc... are ordered by the Commander of the Imperial Guard to summon on the Throne Room. Usually at dawn. Once they are all reunited, the "Emperor in waiting" appears from the Eastern Door of the Room (symbolizing the birth of the Sun, the King of the Gods Abbina). Once the prince reaches the throne, the commander of the Guard offers him the Jade medallion, which he fastens on his belt.      Then the heir sits on the Throne and pronounces a short speech praising his predecessor's deeds and promissing to defend the realm and care about the wellfare the Seris people . After the aforementioned speech the Commander of the Guard then approaches the Throne and offers the Crown to the Heir, then he rises from the throne and slowly puts the crown on his head while the Prime Minister of the previous Emperor recites the sacred words that once were said during the coronation of Mithridates I, the first Seris Emperor (that have been quoted at the beggining of the article). Following this symbolic momment, the new Emperor sits again on the throne while everybody on the room bows to him shouting: Long live our Emperor, Ruler of all below the Heavenly Palace, the descendant of the Holy Goddess Youri, may the fire of your heart gives warm to your people and destruction and desolation to our foes, Long Live our Emperor!.   After this ceremony at the Court, the Emperor shows himself at a balcony near the Royal Gate where he is acclamated by the people of the capital, Sakouramish. This is almost an apotheosis of the new Emperor as the first rays of the day peek out from behind the new Emperor (identifying him again with Abbina, the god of Light and the Sun, his mythological ancestor as descendant of his daughter the goddess of Fire).

Acording to Seris political ideology their Emperor is the supreme protector of the people. As such he is the responsable for their security (defending them from external enemies), and wellfare. He is the supreme administrator of justice (in the name of the gods as its chosen one) and the commander in chief of the seris army and navy. He is also the High Priest of the Seris faith, performing the sacrests of rituals and organizing the clergy.

The Seris emperor during most of the history of the Seris Empire was the largest landowner in the whole country. Technically most of the land was his property. So the revenue that he gained from this was huge and for many centuries the Seris Emperor was believed to be the wealthiest monarch in all Yeia.

The code dress of the Seris emperor varies from season to season and has also changed and evolved over the course of the centuries, depending on each dynasty that ruled the country.   For example the crowns used by the early seris Emperors of the Arsakid dynasty were very different from the ones used by the current Yüttakid Dynasty, whose fashion is itself an evolution of the late Sittakid Dynasty court fashion.   The main elements of the Emperor dress are the crown, the jewels that adorn its dress (specially the jade medallion that adorns his belt), usually a beautiffuly adorned tunic made of the most expensive silk, trousers, (sometimes more widely open or tighter depending on the dynasty's fashion), his boots or sandals are richly decorated too with golden engravings and pearls, and lastly, a sword, as a symbol of authority (As Seris Emperors from the Sittakid Dynasty onwards no lorger use a ceptre like their Blatian and Oronai counterparts). 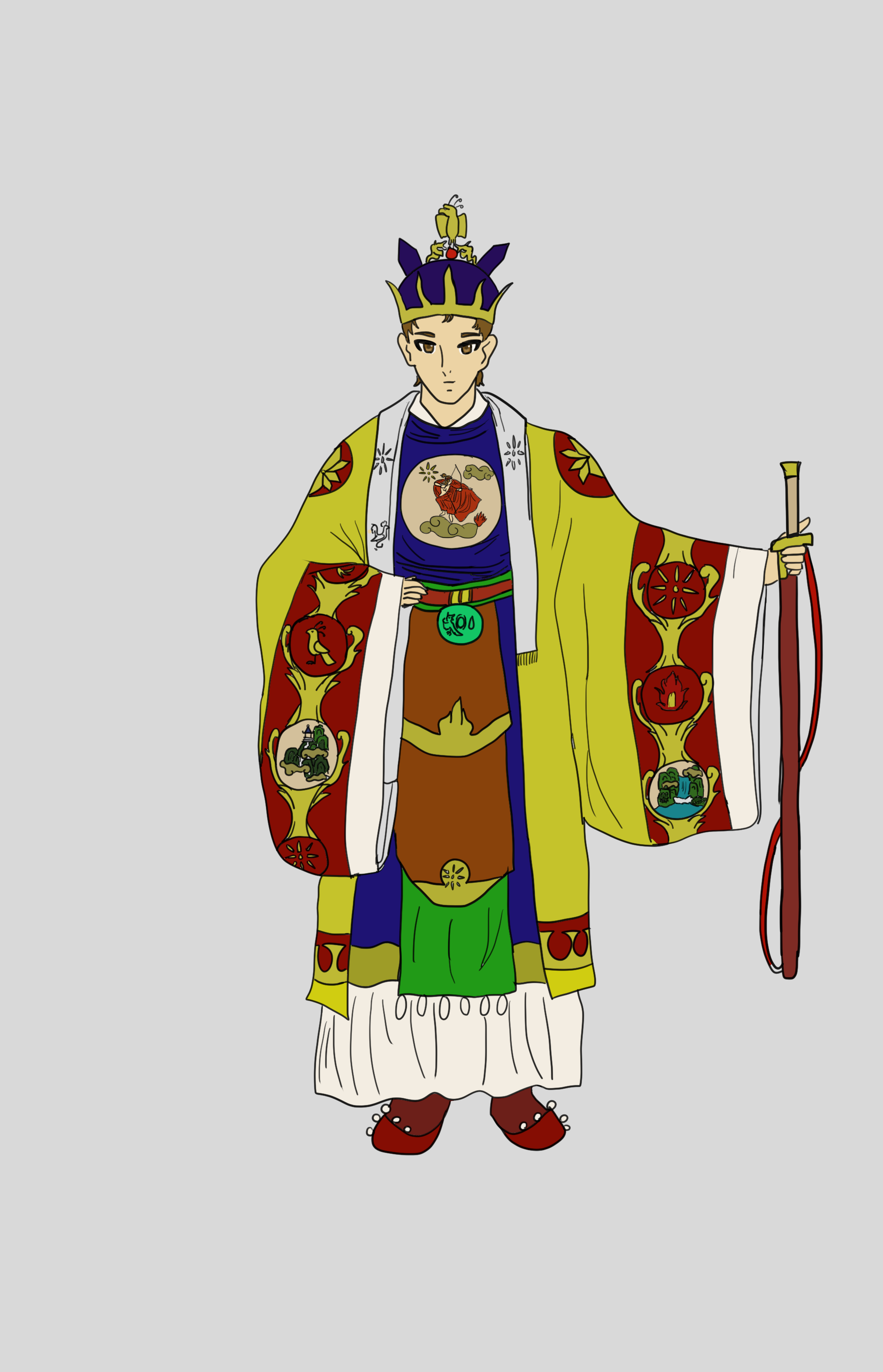 There is no official procedure to remove a Seris emperor. The only way to depose him is by a Coup. For example thats how the Sittakid and Yüttakid Dynasties came to power. The reason of the deposal of a Seris emperor (or Walo in the Seris language) usually has to do with the percieved loss of the God's favour, incompetence, tyranny or weakness.

For the Seris, their Emperor is the supreme ruler of the world ( something disputed by the Ikarian and later on Blatian Emperors) and as such is the only one legitimazed by the gods to rule over all nations. Without him also, the entire political system would collapse and plunge the country into chaos, and also without its role as the high priest the nation would loose the favour of the gods.   Also according to legend the Imperial family (at least the Mithridatid and Sittakid Dynasties) were direct descendants of Youri, the Goddess of Fire (In opposition to the Ikarian Emperor who also according to legend descend from Youri's sister, the Goddess of Lighting), thus making also descendants of Abbon Shabai the King of the Gods. That would be the source of their authority and their claim to be the only ruler under the heavens.

Type
Nobility, Hereditary
Status
In effect
Creation
659 BP (Unification of all the Seris kingdoms into the new Seris Empire)
Form of Address
His Majesty/ Great King/ Exalted one
Alternative Naming
Ruler of all below the heavens/ King of Kings
Equates to
The tittle of Seris Emperor is equivalent to the Blatian and Ikarian Rigas and to the Oronai Kings (called Wanax in the Oronai language). Although for most of its history the Seris Emperor only though of the Ikarian Emperors as almost equal in power and dignity to him, while the Oronai Kings were respected but where considered way more weak than the Ruler of all below the Skies.
Source of Authority
Appointed by the Gods
Length of Term
For life
Current Holders
Related Locations
Related Organizations 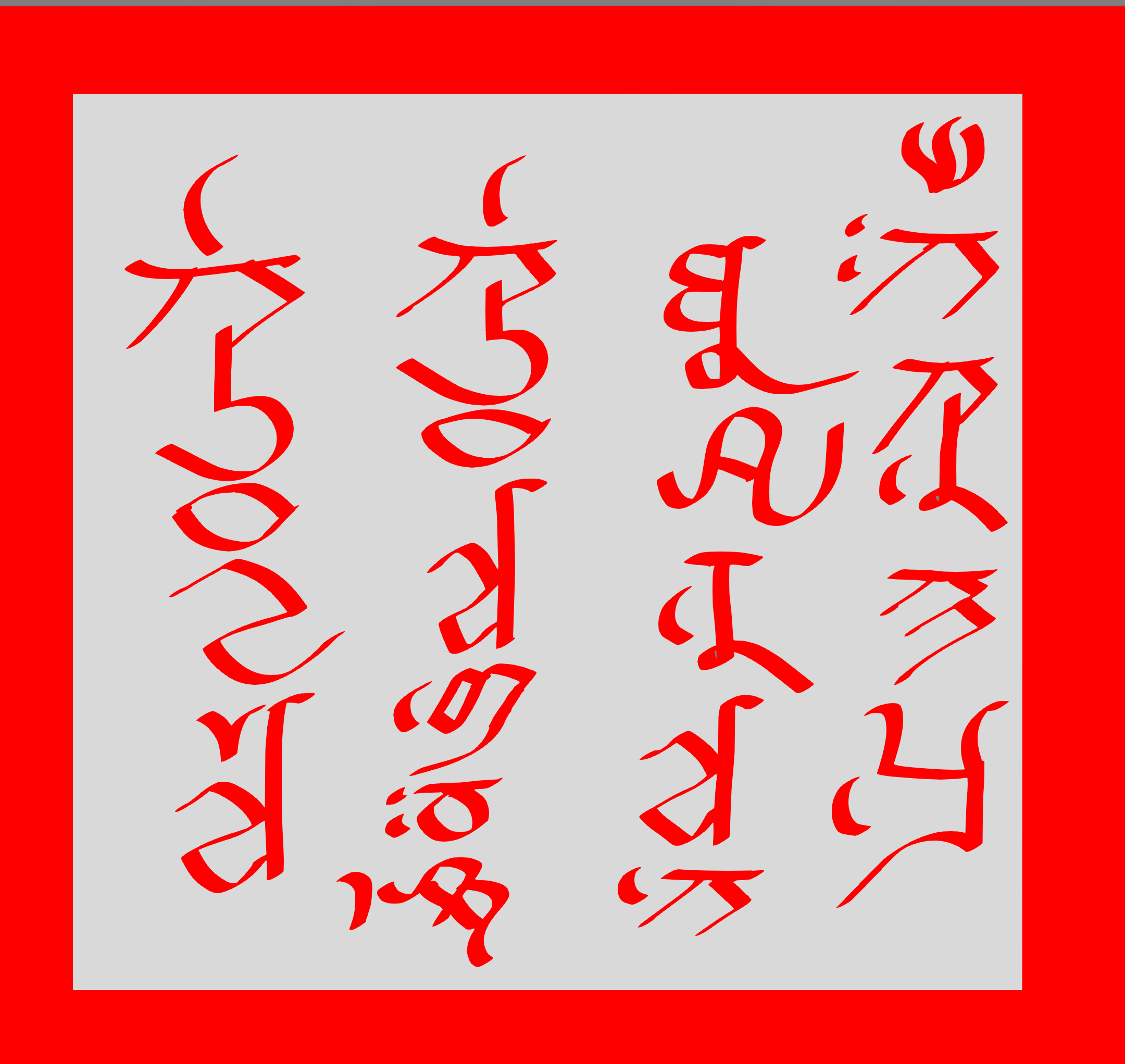 Seal of the Seris emperor; in this case the example is that of King Asurlan I. Its says in Seris: Kuchiwalo Walo läñcassi Ashurlan (Symbol of Fire= Youri, goddess of fire) Näkte. whose translation would be "Emperor of Seria (Kuchi is another name for Seria)King of Kings, Asurlan (descendant) of the Goddess of Fire.   This document would appear in every document that is expedited from the imperial chancellery or sent personally by the emperor himself.

Answering: "a title which cannot be bought, only earned."
Visit Callyxtus's Competition Page Check all other answers to this prompt Competition Homepage

Such beautiful art :D I love it!