She is very strong and has a lot of stamina. She is fairly agile as well, but not extremely. Being a paladin requires her to keep herself physically fit and quick on her feet. One of the things she likes about her sign spinning job is the upper body workout that she gets everyday. She earns money and exercises at the same time.

She has a chitinous shell that is mostly bright green with yellow, pink, black, and blue accents. She also has two pairs of arms and hands, the lower set is more vestigial, and can only emote or gesticulate as she communicates. Otherwise, these little arms aren't strong enough to do or carry much else.   Beneath the shield-like shell on her back are two sets of iridescent wings. Because of her size they can only carry her a short distance, but they stay well protected beneath her shell.

Saxi has two large, curved horns that cover and protect her auditory sensory organs. There are also two antennae on top of her head, which tend to twitch and move based on her mood.

To most people she appears to be an imposing, brightly colored, 6ft tall insect. She is the only Chiton in Cinderhaven as far as she knows, so she tends to stand out a lot. It makes hiding in the crowd or trying to blend in nearly impossible.

Her back is covered by a shield-like shell which protects her very delicate, iridescent wings.

She doesn’t wear clothing except for the occasional cloak. She also has a belt with various pouches and a bag of holding.

She carries a longsword, as well as a Sentinal Shield across her back which bears the holy symbol of her goddess. She

She remembers nothing before a few months prior to the start of the campaign. She woke up in a cell below ground, with no solid memories of her past. Oisin arrived in the cell with her about 1 week later and they realized they had one shared memory. They do not know if the memory is from either of their pasts.   A week or so after Oisin arrived in the cell, The Resistance freed them and took them in. She joined the Resistance effort to seek justice for herself and the other prisoners that had been experimented on.

None that she knows about. She is relatively intelligent and speaks a few languages, but she has no idea how or where she learned them

She currently works as a sign spinner for a spa in the Pearl District. Her unique appearance makes her stand out among the crowd in Cinderhaven and draws more attention to the spa's advertisement.

The Resistance tested her abilities and she discovered that she is a Paladin of Atloxtli, the Chiton goddess of Arcana and Tempest.   She was part of The Resistance's efforts to bring down King Earl Goodsbury , and helped the town into a more democratic leadership.

She has no concrete memories of her past and does not know anything about Chiton culture beyond what she read in Zeknar Feddle’s book on Lamina Island. This has lead to several instances of her having to be extremely vague or evasive about her past. Her close friends all know the truth, but she hides this fact from everyone else as much as possible. It would lead to too many questions that she can't, or doesn't want, to answer.

She has suffered extreme memory loss resulting from attempted Nocturne-ification. Somehow, she and Oisin were able to resist being turned, but it left them with a lot of mental scars. Neither can remember anything before the cell they both awoke in. They have a shared memory that is very clear, but otherwise they only remember scattered fragments that tend to jumble together. Neither she nor Oisin know whether their shared memory actually belongs to either of them.

She is of average intelligence, less than average wisdom, and fairly charismatic. She tends to think on her feet better than being overly strategic, but she'll follow a plan if the group comes up with one.

She believes in doing what is right and does not care overly about breaking the law when it's necessary. Despite what she's learned about her past, she prefers to seek justice rather than vengeance.

Find out who she was and protect the friends that have become her family. Especially Oisin.

She is not good with social interactions involving her past, since she does not remember it. She also tends to be very quiet when others discuss family or their pasts. She doesn't want to make them uncomfortable, but has nothing to add to the conversation.   She is concerned about what will happen when the party goes to Lamina Island. She will have obvious gaps in her knowledge that other Chitons are sure to notice.

Likes: Oisin, Pinbol, her friends, Aldion, Zreet, Tirah, to know what her mission is
Dislikes: Secrets and lies, not knowing who she used to be, evil intentions, callous people

She is distrustful of new people and places. Given what little she knows of her past, anyone and anything could be a threat. She is less quick to trust than some of the others.

She avoids talking about her past with people who don’t know already. She is VERY vague about her past with most people.   She does not sleep in a bed; it feels strange and uncomfortable to her. Instead, she sleeps on a soft pile of hay in the corner of her room.

She keeps herself clean and tries to avoid glitter as much as possible.

Best Friends with Oisin, friend and ally of all members of the Party, Pinbòl

Follower and Paladin of Atloxtli. The core tenet of her faith are to honor the chaotic beauty of magic and nature.

Tilts her head when confused, and clasps her extraneous “hands” in front of her when nervous

Saxi and Oisin woke up in a cell together. They were both missing memories, but quickly became fast friends and roommates. 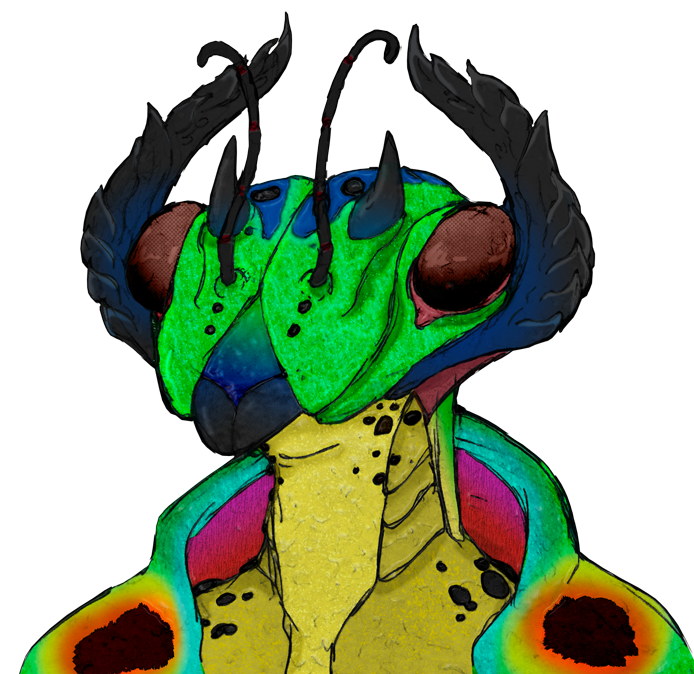 Alignment
Chaotic Good
Current Location
Cinderhaven
Year of Birth
1179
Circumstances of Birth
unknown
Birthplace
Unknown but she assumes Lamina Island
Spouses
Siblings
Children
Current Residence
Pinbòl and Oisin's place
Sexuality
She has little interest in sexual relationships. She does not know enough about Chitons to know if this is because there are no male Chitons around or if it is because she has a mating season.
Gender Identity
Female
Eyes
Reddish black
Hair
none
Height
6'
Weight
150 lbs
Quotes & Catchphrases
“I can fly, Sweetheart.”     "My past is lost. Justice is my future."
Aligned Organization
Phoenix Dawn
Known Languages
Chiton, Common, Celestial, Gnomish, Sylvan 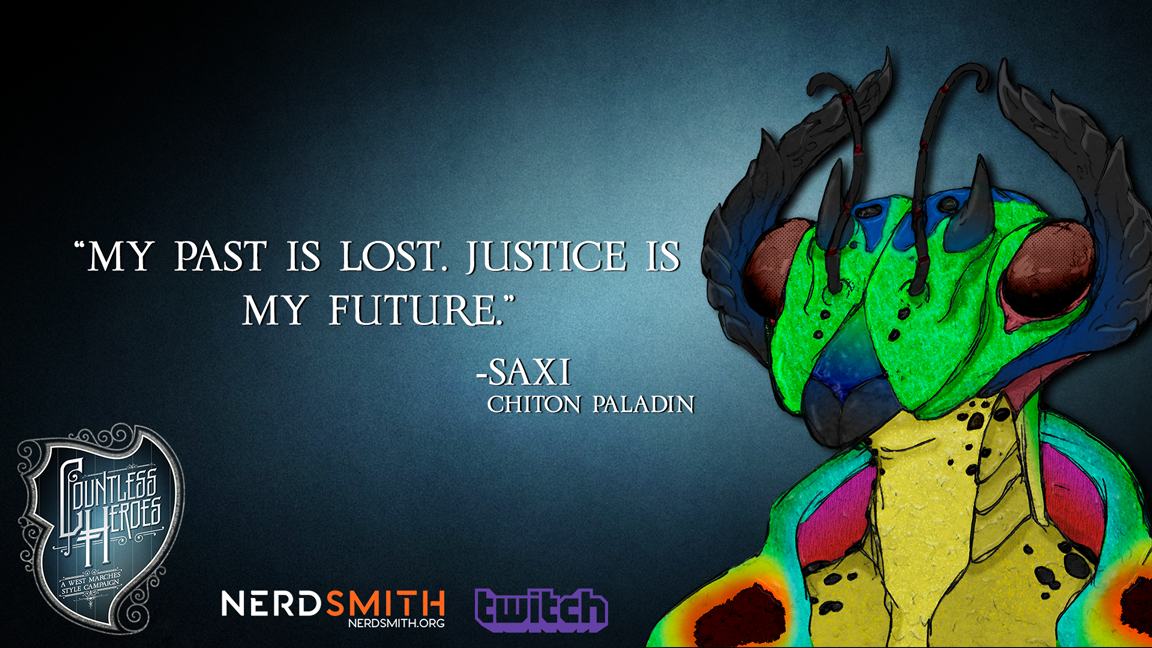