In order to fuel the Kin of Sabratha's roaring trade in slaves, the Kin have created and refined a corps of specialised troops specifically trained to capture slaves from the surface and the Underdark and return them to the city of @Sabratha for onward sale by the slave merchants. Life as a Sabratha Slaver can be incredibly dangerous, but the rewards they gain for the cargo they bring home are significant.

A detachment of Slavers will always have a good supply of chains, manacles, metal collars and strong rope in addition to their standard issue survival gear, all of which is employed to aid with the retention of individuals captured as slaves.

Sabratha Slavers are given much more freedom to choose what weapons they carry into combat, primarily because they do not fight in close formations. On the whole they will tend to choose weapons that have both lethal and non-lethal capacities, as they are often aiming to incapacitate rather than kill their adversaries. Weapons carried by Sabratha Slavers include: Creature Catchers, bolases, harpoons, and nets in addition to their standard issue short-sword and light crossbow. Slavers universally prefer leather armour, as its lighter and more flexible qualities give them better movement and speed capabilities to hunt down prospective slaves.

When setting off on a new expedition to capture slaves, Sabratha Slavers will travel and work in detachments of around 100 individual troopers, commanded by a Captain. Each Captain will then have up to 2 Lieutenants, four Sergeants and 4 Corporals beneath them, who collectively convey orders from the top, and lead smaller raiding parties within the area the detachment has chosen to work. When out on a slaving expedition, the Captain is the sole voice of authority and makes all decisions related to the conduct of the slaving expeditions and associated raids. As the a Slaver detachment is generally completely isolated from the military command structures of Sabratha, it is very rare for a Captain to seek consultation with superiors back in the city. Instead, the Captain will have to submit a full report of the raid’s activities, and potentially justify each decision that they made, before their superiors.

A detachment of Slavers almost never operates in the open. On arriving in a new region, they will establish a supply dump in a well-hidden, easily defendable location where they can leave their expedition supplies, and captured slaves under minimal guard. The detachment will then split into smaller raiding parties that will then scour the landscape looking for potential targets and ambush areas.   Slaver attacks are almost always ambushes, designed to hit an unprepared target quickly, giving them little time to retaliate before they have been overwhelmed. If an ambush is not possible, then Slaver detachments and raiding parties will always attempt to launch surprise rush attacks. In this instance it would normally involve the whole detachment coming together to rush a village or small town, take as many slaves as possible and then retreat before a coherent defence or counter attack can be mounted.   Sabratha Slavers will almost always withdraw when confronted by well armoured and disciplined troops, but this should not be confused with a disorganised retreat. In almost every instance where a raiding party of Slavers withdraw in the face of overwhelming opposition, they are almost certainly looking to attack from another point where they can take their adversaries by surprise.

Sabratha Slavers are trained in skirmish and hit-and-run tactics, camouflage and incapacitating opponents in a non-lethal fashion, far more than their counterparts in the Field Troops. Slavers do receive a lot of training in general martial skills as well, as they have to be able to effectively kill an opponent deemed too dangerous, or too risky to enslave in addition to having to defend themselves against whatever creatures might appear from the depths of the Underdark.

When a detachment of Slavers leaves to go on an expedition they do not have any logistical support from other forces. A unit of Slavers always works in isolation, often far from Sabratha itself, so they have to be self-sufficient. When leaving for an expedition, Slavers will carry all of the provisions they will need themselves, and then leave them at a supply dump that the unit sets up in the region they will be hunting in. Small teams of Slavers will then take it in turns to protect the supply dump, and act as a logistical corps of sorts. 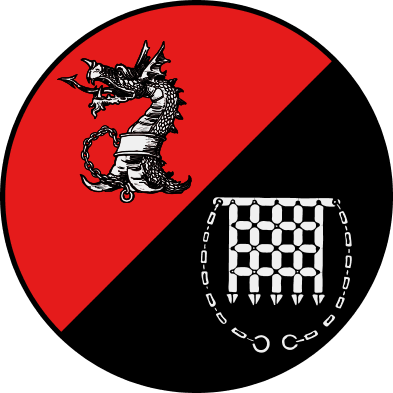 Emblem of the Sabratha Slavers