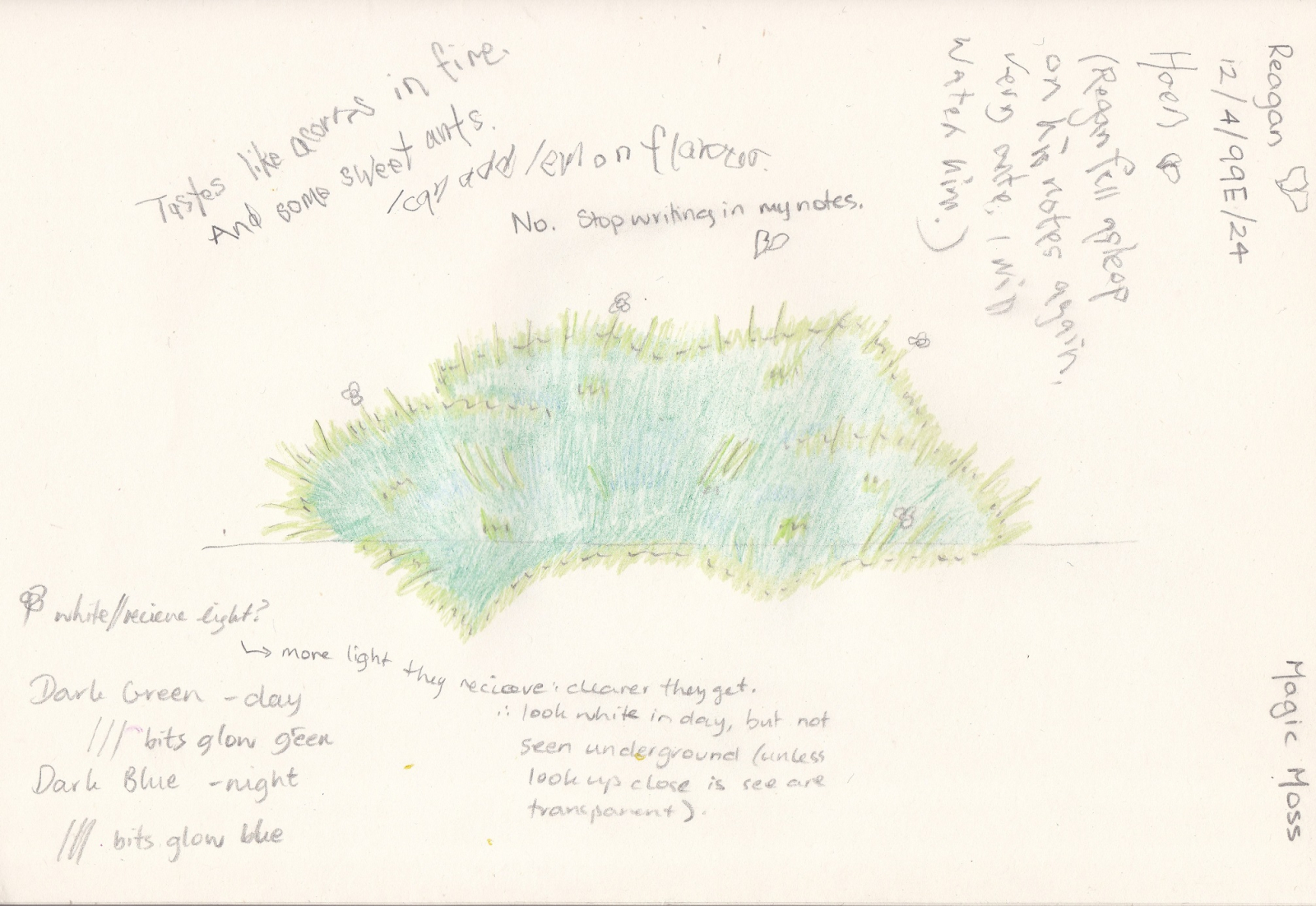 Taegrin, your friend, Ben, has collapsed due to an outbreak of a particularly potent varient of undersea magic moss. You have been given a week's leave to see him.
Mimi, as you have been given provisional acceptance into the Search and Rescue team, you can write a report on the moss' effects, and meet up with KLO-toon (who will be watching over you in the Search and Rescue Team).

Awemonth the 36th, Year 50 of the Century of the Nymphs, 26th Cycle
Magic Moss is not for the fainthearted. Or those without high levels of posion resistance. (Although the Dwarves and Dark Elves have this resistance to the underground flavours of magic moss, it is only those specific flavours.) The most potent (in terms of toxin) flavour is the underwater mafic moss, found predominatly around The Point and the undersea caves near Bahriin. As it is underwater, there haven't been many cases of the moss poisoning Forest Elves, but when it does, it can be really, really bad.

The undersea varient of magic moss is much more sturdy than the magic moss varients on land. The further into the Ocean it lives, the sturdier it is. It is believed that the sturdier the moss is, the more poisonous it is, however, the poison is under a sturdy shell.
Instead of tiny transparent stems leading to tiny transparent flowers that luminescent at night, undersea magic moss has thinner and longer transparent ribbons that flap in the current of the Ocean. I wonder if Reagan has notes on their differences and what makes the toxins different. I'll be visiting Hoen soon anyways.
Like most other magic moss, the base of the moss is a drag grown colour and has transparent parts that glow different colours at different times of the day.

One particular strain of the Undersea Magic Moss lives in the river caves under Turien. These caves are near the city of Bahriin, but they are not all completely filled with seawater, as they twist and turn under the landmass of Turien. This strain has the spiciest flavour.
Although this strain is not always covered by water, it has the quickest onset of the more intense side effects of consuming the moss. It has always been known to have high hallucenogenic properties, and if it still wet, but outside of the water, it seems to be worse. That could be argued that it is only worse to the land dwellers though, as the Mermaids can move away the hallucinogens and poisons via sea currents. Due to its intensity, it is also known as 'Death Eater'.
Thus, those like Taegrin's friend Ben can have very bad effects after just being near the moss. This can be partly mitigated by diluting the moss immediately, but it is dependant on amount consumed, how long its been in the body and the potency of the moss. Ben has been unconscious since he was poisoned, and even though he had immediate medical attention, and hardly touched the moss, it seems to have affected him badly. Some wonder if it was because he was young, others think it would be the opposite.

Magic Moss is, while a fun flavour to those who can eat it, very bad for those who cannot eat it. The Undersea variety is the most potent, particularly to Forest Elves (as they live the closest). I would like to visit the caves at some point. I didn't have time last time, but maybe Almeta Bearach can take me there. We can have a picnic of natural flavours!

... Your likening of poisons to flavours scares me.

"Slaves to flaves" is our family motto.

By the way, do you know that Dryad Sapling that comes around to see Ben? He looks familiar...

Terry? He is Ben's friend, and the son of the Trader Dryad I am aquainted with.

Oh, do you think I could talk to the Trader? Maybe he has some info. on the moss.

I'll ask him to see you if I see him. ... I don't know if he will though, Terry would have pestered him for answers already.

I don't even know why you still talk to that Almeta Bearach guy ... We have planty of natural flavours in the Great Forest.

There are a lot, maybe I can have a picnic with Hoen tomorrow?

If you have to put a whole sentence in brackets in the introduction, then it is either unnecessary or in the wrong place.
Adding the specific effects of the moss would be appreciated, particularly the difference between the undersea variant compared to the land variants. Especially snce you are located near the Healing Hut and Medical Tavern.
If you want to put a reflection and a conclusion in your report, that is an option you can take. Please separate the sections though, making it clear which is which.

I met KLO-toon. I wanted my name to be KLO-spice, but they made it KLO-pinksy. I have thus died my hair purple.
The main effects are hallucinations, magic build-up and eruption and magic deviation. There can also be effects of vomiting, nausea, headaches, loss of fingers or toes, eye and hair colour change, skin pigmentation change, rashes, loss of hearing or eyesight. We can add unconciousnes to the list of effects to the undersea varient - and generally the mind effects are a lot worse.
I suggested to Taegrin that he should sing to Ben to keep him pleasant company but he just glared. He must have told someone else though, as I've heard some singing from their house at night.
Council Notes
Maybe we could ask Mimi for a description of each magic moss, and the other poisonous plants, of their 'tastes'. It could be worthwhile if there is a correlation.

Answering: "a species considered monstrous by some"
Visit TaraFaeBelle's Competition Page Check all other answers to this prompt Competition Homepage