Observation Log of KLO Mimi Lakes: The City of Bahriin

Toilmonth the 30th, Year 50 of the Century of the Nymphs, 26th Cycle

Bahriin is the name of the city at the Point that the Northern Warrior Mermaids live in. The small city is underwater and houses are mostly attached to the underside of The Point, minimising how much Ocean space they use.

The people of Bahriin city are Mermaids, specifically the warrior tribe that moved to the north in order to carry out missions from the Council of Turien. They really took this 'working on a mission' mentality throughout their entire city and lifestyle. See Taegrin's report for all the work they do.
Each house is decorated according to the style of the Mermaids who live there, however, many of them are minimalistic. See Taegrin's report for the various styles. The grander buildings, particularly the ones further into the Ocean, are generally the ones related to some kind of work or other, like the Building of Elders, or the Whale Depository (they have the best sashimi, and the first piece per visitor is free - though it is a quarter of the size of a normal serving).
Most of the visible area of the city looks like a coral reef. Many house openings are fashioned after clams or coral, or just that coloured rock. Most of the Ocean space is left for quick swimming and training of the younger generation. 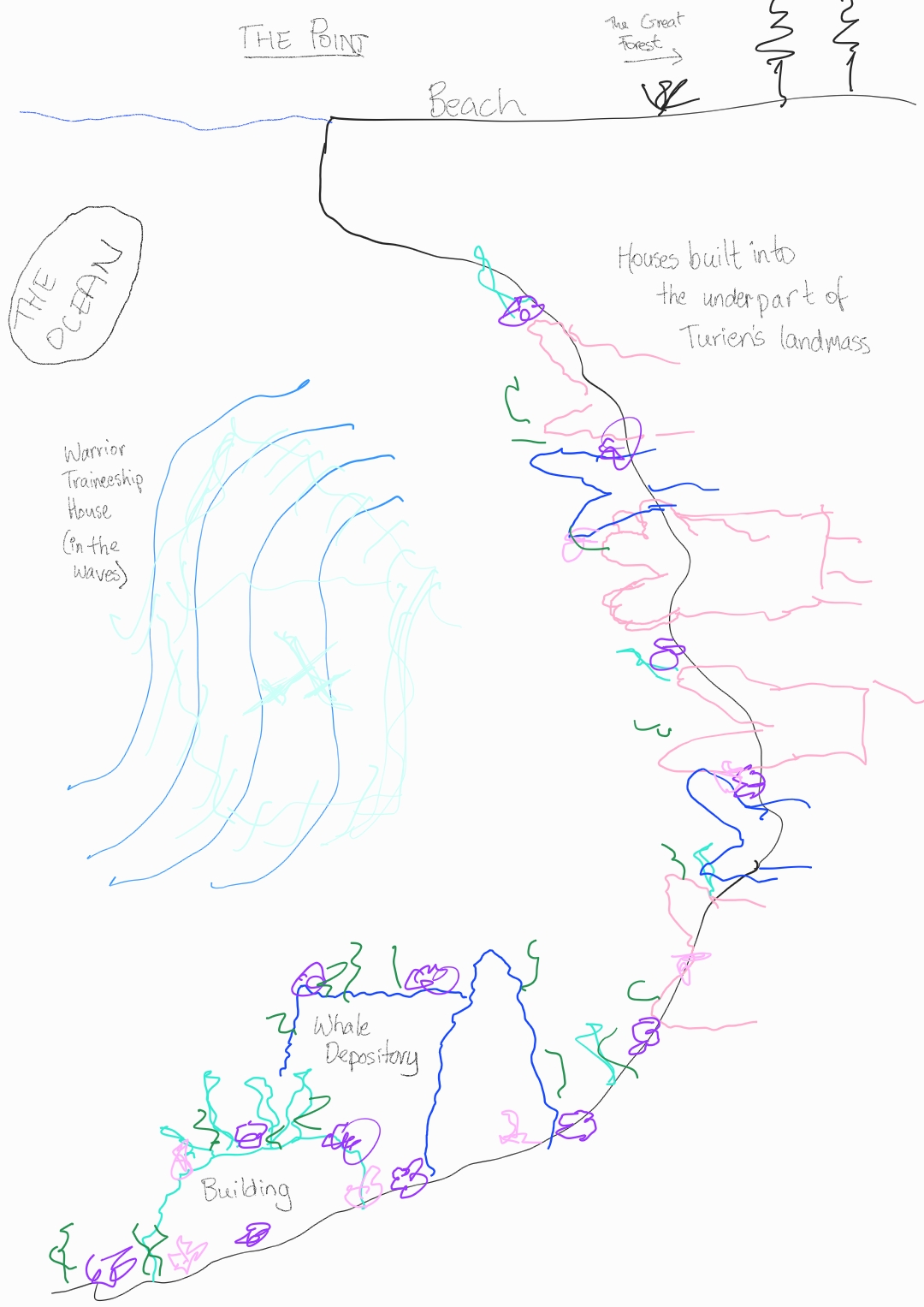 Elder Jazzach wouldn't let me visit Almeta Bearach until I did an hour of training at the Warrior Traineeship House. It's not really a physical house, but it was once. The magic to hide a building in the waves has been Forbidden, but as it was 'half-hidden' when the Forbidding happened, and as long as there is a direct ancestor of the original owner (who takes the position of Head Trainer), it can still be used by other Mermaids. See Taegrin's report for the specifics of how this works.
It was pretty fun, even after Jazzach singled me out for a one v one. As we were in the Training House, there was no splitting of the ground, or demolishing coral properties, so it was fine.

As the town was built around training up Mermaids to do the heavy duty work in the Ocean for the Council, as well as hunt 60 % of Turien's meat, the Mermaids of Bahriin have not built up tourism. The only place that has been built up is the Whale Depository. Of course, not that many people from Turien can come to Bahriin (only Mermaids and Naiads), but they have not joined Mermaid Cove in livestreaming destinations and entertainment. Nor do they support a large online shopping district. The Whale Depository, however, has branch facilities in every city, with the largest on land branch in North City. See Taegrin's report for their meat and other exports.
Just because they do not encourage tourism does not mean that there aren't places to see. Almeta Bearach took me to the north-western edge of the city, where there a large drop of the Ocean floorbed. There were sections along the drop covered in pearls and broken shells. These are not to be touched, as many contain the memories of people from before a lot of mind magics were Forbidden. Between the random sections, there were a number of small caves we could play 'Huntress of the Fish' with. See Taegrin's report for the different games Mermaids like to play.
Almeta Bearach and I played around until nightfall (now sitting back at the top of the ridge), when the corals and water plants lit up from the furthest depths to where we were. It was more spectacular than fireworks - covering a larger area, with more colours, and the colours stayed lit up. Moans and calls from the larger deep sea creatures found their way up to us, heightening the chilly atmosphere. Almeta Bearach gave me cookies and made a heated water current for me to use as a blanket. I flavoured the water running through his gills like a flower tea.
Then he told me the stories of the prisoners who escaped Delusional Isle and how they swam with the whales, either becoming monster of the deep Ocean currents themselves, or getting trapped in air pockets under the waves. He told me that the moans of the creatures we were hearing were from the escapees. I laughed and immediately tried to swim down and search for them. It was such a fun night that I wrote 12 pages in my diary about it. See Taegrin's report for the specific stories.
However, I could not find the criminal escapees, or any scary monsters for that matter. But I did find this (insert pic of sea/fish gunk crusted staff weapon from the founding Northern Warrior Mermaids here). Once Elder Jazzach saw it, she stopped trying to beat me and beat her brother into a grounding instead.

Bahriin in the city of the Northern Warrior Mermaids who like to train. They don't particularly like tourists either. They have the best magical weapons.

You really should write your own report, not just refer everything back to mine.

Eh~ They are all notes from me anyways. Not like you can breathe underwater.

Yes, but. I'm pretty sure that's not allowed. They have to be two separate reports, right?

You wrote 12 pages about him? You didn't tell me that?!

Not just about him - I also had my battle with the big black fish! That's how I got this fancy artifact, right? Plus, I don't need to tell you everything. Even Hoen didn't tell Reagan everything, right?

But Hoen didn't run off with other guys..

? I had to for your report. And I have to back to study the artifact more - you want me to for the artifact report, right?

We're not meant to write about our own artifacts. Let's swap them! My Uncle is close with the Mermaids (that's how I was able to untangle half the stories you told me) so I can find out about the staff through him.

Really? But Tish also has an artifact now too, so I could borrow hers.

No! Ir's better if we swap them. Plus, she won't let you take it away, whereas as we are swapping them, I know you won't lose it or anything with me holding yours hostage too.

I suppose that works.

I will consider giving you both a joint report and see how that goes. Normally, it is expected for KLO-1s to have 31 individual reports themselves, but there might be some leeway.
I am glad you are referring to Elder Jazzach as 'Elder', despite the fact that she has issued a complaint against you, Mimi. However, as there was no evidence to show you were actually in the wrong this time, it was dismissed. Please be careful in the future.

Taegrin, there is no rule about not being able to write a report on your own artifact. Particularly as it is pretty rare for one to own an artifact.

Isn't it better this way though? Then Mimi won't get into trouble with any of the Northern Warrior Mermaid Elders.

I can't deny that. Still ...
Council Notes
Aid Taegrin in the research of the artifact. Last we heard, the only founding Northern Warrior Mermaid weapon still usable was stuck in a sea monster, though sea monsters have been little more than rumours or exaggerated descriptions of pregnant (or otherwise oversized) whales.

Answering: "Α settlement beside or in a great expanse"
Visit TaraFaeBelle's Competition Page Check all other answers to this prompt Competition Homepage

Thank you :)   I had a lot fun with making characters in my world look at their world.

I’m really interested to learn more about the banned mind magics and how memories were once stored. Great article and creative use of conversations!

Thank you :)   I do plan on writing more about the banned magics - there is a lot to write about! Many were stored in pearls and saved under the Ocean, but I'm still working out how.