Were you at the DragonGoal match last night? Wasn't it amazing?! Aiyürri intercepting that pass from the defender and dunking it through goal over his head? I wish I could be so skilled!
— DragonGoal Fan

DragonGoal is a competitive team sport played predominantly in Western Thurásin, particularly in the Duchy of Ovük. 3-6 players on each team attempt to throw a ball through the opposing side's goal, all while on the backs of dragons and several metres above the ground.

Two teams consisting of either 3 or 6 players take to the skies and try to score points by getting the ball through the other side's goal. How the ball can be handled has several restrictions, including; Attempts at scoring can be made from anywhere on the field and by any player from either team, and these efforts can also be stopped by any player. Contact of any kind between players is highly discouraged, and if attempting to catch a ball would result in a collision with another player or with boundaries around the field, it is expected for players to 'cede' the ball for safety.   Matches of DragonGoal can vary in length. Most are played as 4 segments of 10 minutes, but others can be 6 or 8 segments long. This allows for riders and their dragons to rest and for substitutions to be made. The only other circumstance in which substitutions are allowed is in cases of injury, such as if a dragon collides with a boundary post or a rider falls into the catchment net. 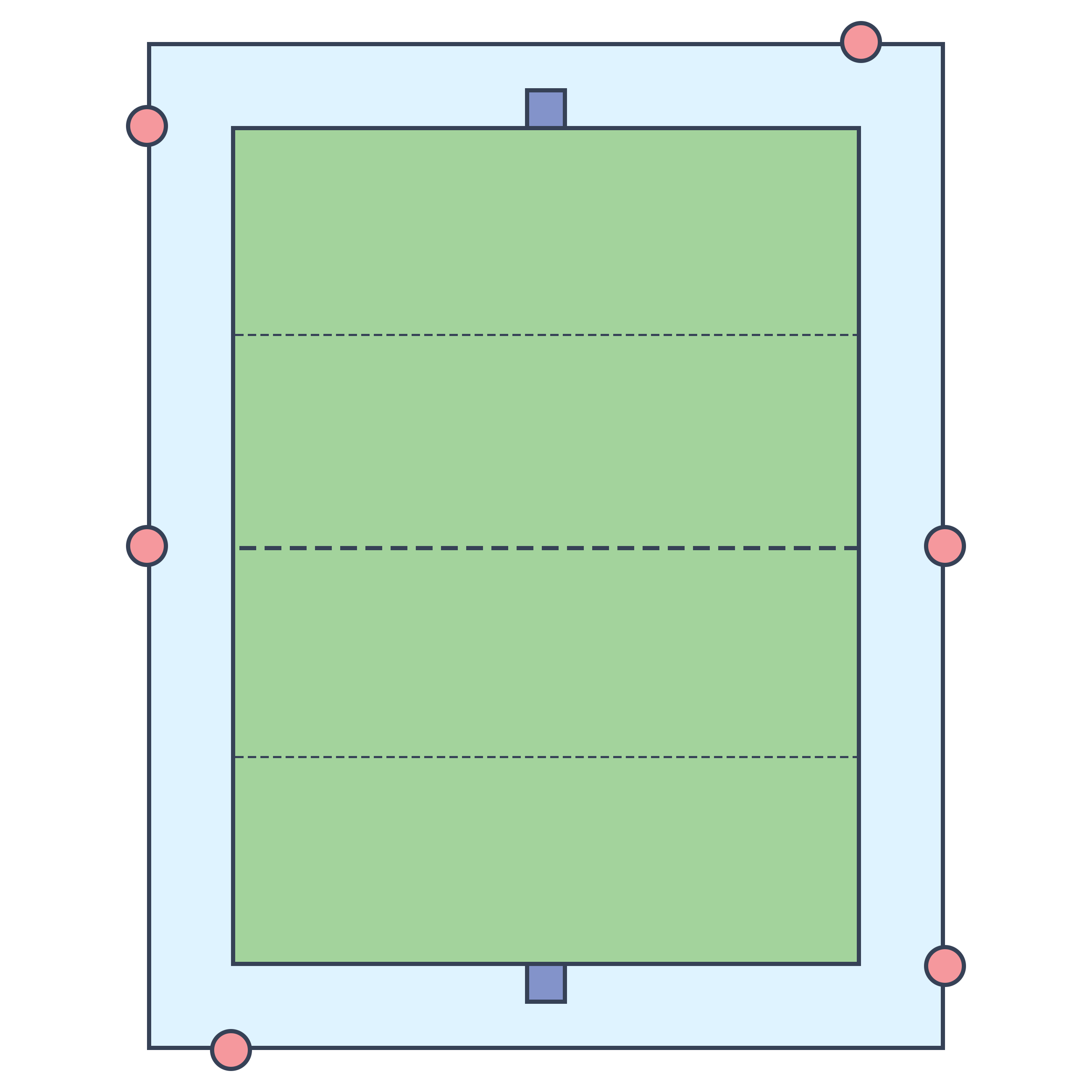 DragonGoal Field by Isaac Thompson
The field in DragonGoal is quite large, usually 150 by 200 metres. An "outer bounds" of at least 20 metres is given around each side, and this larger space is where the net for catching the ball and falling players is placed. Additionally, along specified points on the outer boundary, referees will be stationed to ensure the ball does not leave the field. One is placed at each corner, but so that they are in line with one of the inner boundaries, and additional referees may be placed near the centre line.   The vertical height of the play space will vary, with a usual upper limit of 50 metres and a lower limit of 20 metres. The height of the field will affect how the goals are set up. These are placed at each end of the field, with tall posts 10 metres apart. In games where a lower height limit is used, the goals are effectively 10x20, but in taller games they can either be 10x50 or have crossbars placed to create a 10x10 square goal at the vertical middle. Regardless of size, the goals have nets tied to the outside to catch scored points and allow for easier retrieval.   While all versions of DragonGoal will have a centreline, others will further divide the field into quarters and impose restrictions of where certain players can go - for instance, an attacking player would only be allowed in the two central quarters and the opponent's end, but not their own goal quarter. Even in matches where these rules are not enforced, teams will often lightly follow it to ensure someone is always in the attacking and defending halves of the field.
Alternative names
Dragonball, Skyball
National sport of
Ovük
Related Ethnicities

By far one of the most famous players of DragonGoal is Aiyürri "Danger" Ro Eogla, an elf from Ovük with an orthodox playstyle. With her various flashy manoeuvres, she has caused numerous rules to be passed in professional and junior DragonGoal to prevent others imitating her and getting themselves injured.   Chief amongst these is a ban on flying upside down for an extended period of time. While very few would dare do that in a game where coordination is important, Aiyürri did it anyway. In an infamous match against the team from Ozäxa-Lavüdh, she flew upside down on her dragon so she could grab the ball directly from the hands of an opponent, who was so distracted by the event they almost collided with a boundary post.   Before the match had even ended, officials from both sides had come together to draft a statement condemning Aiyürri's reckless behaviour, and the regulating body for the sport had the rule instated before the month was over. When questioned about it, Aiyürri simply found it hilarious.

If they think I'm not going to find more ways to do cool things in the air, then maybe I should buy them some pens and papers in advance. They clearly aren't prepared!
— Aiyürri Ro Eogla

Ever since dragons were first tamed, they and their riders have participated in sport. Simple games involving throwing balls to one another while airborne were rather common as a test of a rider's coordination and their dragon's manoeuvrability, but some found these too boring.   DragonGoal evolved out of a series of drills run by the Ovükayo Dragon Lancers during the Era of Conquest, after their kingdom had been mostly conquered. As the lancers trained to defend their territory from the invaders, more and more complex tasks were thought up to keep their skills in check, including obstacle courses and collection objectives. But when drills to train teamwork and coordination were developed, many lancers realised they were far more fun than they had any right to be, and brought elements of these drills back into civilian life.   One of the first "official" games of DragonGoal was played in 35 Collapse as part of festivities held to celebrate the collapse of the occupying empire, but the game had clearly existed in some form prior to this display. This first match was held on a smaller field than the modern game, with only 3 players on each side and only playing for 2 10 minute segments. But the match so delighted onlookers that it quickly spread throughout central Thurásin, and people flocked to the frosty western mountains to see it played.   The modern game has retained the same core as the original versions, with the major changes being the increased field and team size, as well as rules forbidden magic and required specialised stirrups designed to keep the riders firmly attached to their dragons.

The most obvious variants of DragonGoal are those which change the team size and height limit. The "default" is considered to be the 6 a side with a 20 metre height limit, as this is the version played in junior levels of the sport. Keeping the height limit low is more common than raising it, as it allows for spectators to better observe the events and requires fewer referees to monitor the state of play. As such, it's far more common to have the limited team size of 3 a side version, which is often played at a professional level. Some versions will also change the ball used, making it larger (for junior players) or smaller (for senior players).   The most outlandish variant is one which allows limited forms of magic to be used, specifically to manipulate the ball while it is between passes. It is understandably extremely difficult to score in a variant where the ball can simply be blown away from the goal net, but the flashiness and complexity of manoeuvres in Magic DragonGoal make it quite a sight to behold.

Competition Homepage
In response to the prompt A non-contact sport or game - anything from carriage racing to golf!

This is such a brilliant article! You have really thought out the mechanics of this game. It feels so real! I love the details you added about the variants and Aiyürri Ro Eogla.

Aiyürri sounds amazing. I want to be her friend.   This sounds as though it would be such a fun sport to watch!

I agree with the refs that upside-down should be banned, because my first thought was 'what if you crash into the ground upside-down?' O_O