The glassy black mineral known as 'Onyx' is pure magic infused into a stone-like material. As a spellcaster draws the magical energy out of a chunk of Onyx, the stone loses its glossy black sheen and turns progressively more grey until nothing is left but a simple granite rock.   When activated, Onyx emits various colors of magical energy, depending on how the magic is used as its being drawn. Deep reds, purples, blacks, and occasionally oranges can be seen in the arcane flow.   Onyx, of course, is an extremely valuable substance. Like with magic items, there is no standard market or gold piece value for standardized amounts of the stuff. Any spellcaster can benefit from its use as a battery of Spell Slots or Spell points, so even mundane people can see the inherent value in it.   Chunks of Onyx glow softly when viewed by Detect Magic, and the aura they give off is that of a softly shifting rainbow, the potential of all types or Schools of magic.

Onyx appears naturally in veins deep underground, often in volcanic regions, but the process of how it is formed or the origin of these formations is hotly contested by scholars and sages. Generally, the larger the unbroken chunk of Onyx, the more magical power it contains. These chunks can be chipped into smaller pieces, at the risk of shattering the entire chunk (and unleashing a deadly blast of raw magical energy). See 'Hazards', below.   This may be done in order to embed smaller, more manageable chunks of Onyx into items, such as tools or weapons, in order to magically enhance them. There is a smallest limit to these pieces, as anything smaller than a 1 inch cube doesn't hold enough power to manifest even a single cantrip.   Strangely, there is no known method of combining smaller pieces of Onyx into larger ones, nor is there a way to 'recharge' a piece of Onyx. Once it is drained, it will always remain so.

At its core, Onyx is simply a physical manifestation of magical energy, as best represented by Spell Points (DMG Variant Rule, pgs. 288-289). When raw and untapped, a 1-inch cube of Onyx contains about 1 Spell Point (SP) worth of magical power. This rule continues in a volumetric algorithm: a 2-inch cube contains 8 SP, a 3-inch cube contains 27 SP, etc.   Massive chunks of Onyx have been discovered, some larger than a person, but these are often vehemently fought over by the nations of the civilized world for unknown magical purposes. With that nearly unlimited amount of arcane power, the possibilities are endless... floating cities, the ability to cast spells beyond 9th level, the creation of Mythals, and perhaps even Godhood might be within mortal grasp.   To convert Spell Points to Spell Slots of certain Spell Levels, use the chart below:

For instance, a Sorcerer is gripping a shard of Onyx in her hand. It contains 5 SP worth of magic. She could use it to cast a 3rd level spell, without using a spell slot, or she could use it to cast a 1st level spell now and then a 2nd level spell later. It should be noted that it is possible to use Onyx to cast a spell at a higher Spell Slot (Spell Point cost), IF the caster is capable of doing so.   It has been rumored that Onyx can also be used for non-Arcane sources of power, such as a Monk's Ki, a Barbarian's Rage, a Bard's ability to inspire, Sorcery Points, etc, but these are unconfirmed.

Large natural veins of Onyx are found only in the volcanic mountains of Downspin Continent, in the lands of Aragon. Smaller veins have been found in the other lands of NewGen, but never in large amounts.

The origin of Onyx is still hotly debated topic among the learned. Is it the crystallized blood of the Gods? Some sort of byproduct of Creation? of the New Genesis? Was it intentionally placed, or merely a happy accident of geology or arcane influence? Is it dangerous? Toxic?   Are mortals even supposed to be meddling with it? Perhaps the Gods disapprove of its use and are judging our temptation to use it. The Gods have been mostly silent on the topic of the origin, with only the most vague acknowledgment of its existence.   Most people are far more concerned where Onyx is going (and what its used for), than where it comes from.

Onyx seems to be extremely stable. if not intentionally drained of magical power, Onyx can remain unchanged for hundreds of year, never losing any potency.

Discovered by the Aragonians early in the First Epoch, it was regarded as a curiosity at first, until it's explosive properties were noticed. Soon after, the other, more magically-minded Races, discovered the strange black rock and began to explore its uses in arcane matters. Soon, small amounts of Onyx were found all over the known world, and the small veins were mined out. By the turning of the Second Epoch, the Races (with the exception of the Aragonians themselves) had fully integrated the use of Onyx into their magical traditions.   Around 1500 NG, Moebius the albino Aragonian convinced his people to incorporate Onyx into their mechaniks, which set off a revolution in their technology and culture.   Nowadays, Onyx-enhanced items, including weapons, armor, tools, machines, and modes of transportation are relatively common, if astoundingly expensive and out of reach of commoners.

Onyx can be split into smaller pieces by an artisan using the appropriate Tools. Jeweler's Tools, Smith's tools, and Tinker's tools can all be used for this purpose. The base DC is 15. If the Check is failed, there is a 50% chance that the Onyx chunk will explode (see 'Hazards', below).   The Aragonians have invented a method of grinding Onyx and using the resulting dust in thin, wire-like 'traces' that they can embed onto the surfaces of items, creating a basic form of circuitry. This allows them to animate and empower tools, weapons, armor, and machinery. This allows for extremely efficient use of Onyx and in unusually subtle or complicated ways. The other Races can simply embed a chunk of Onyx into the hilt of a sword to enhance its damage potential, but the Aragonians can use a fraction of that amount of Onyx and have the sword also light up or have some other useful feature.

If struck hard enough to damage it, whether in an attempt to shatter it or to split it into smaller pieces, Onyx can explode, converting all of its matter into energy at once. Onyx has the same base hardness of Stone (17 AC, and is Resilient). For each Spell Point contained in the Onyx, the range of the explosion increased by 2.5 feet and the Force damage increased by 1d6. The Dexterity Saving Throw for half damage is DC 13.   For instance, a Dwarf smashes a Small piece of Onyx (10 HP) with 6 SP stored within it on his anvil with his hammer. His attack succeeds and he does 12 points of damage. Because he is intentionally attempting to destroy the Onyx (not split it with appropriate tools), it automatically explodes in a 15 ft sphere and does 6d6 points of Force damage, Dexterity Saving Throw of DC13 for half. 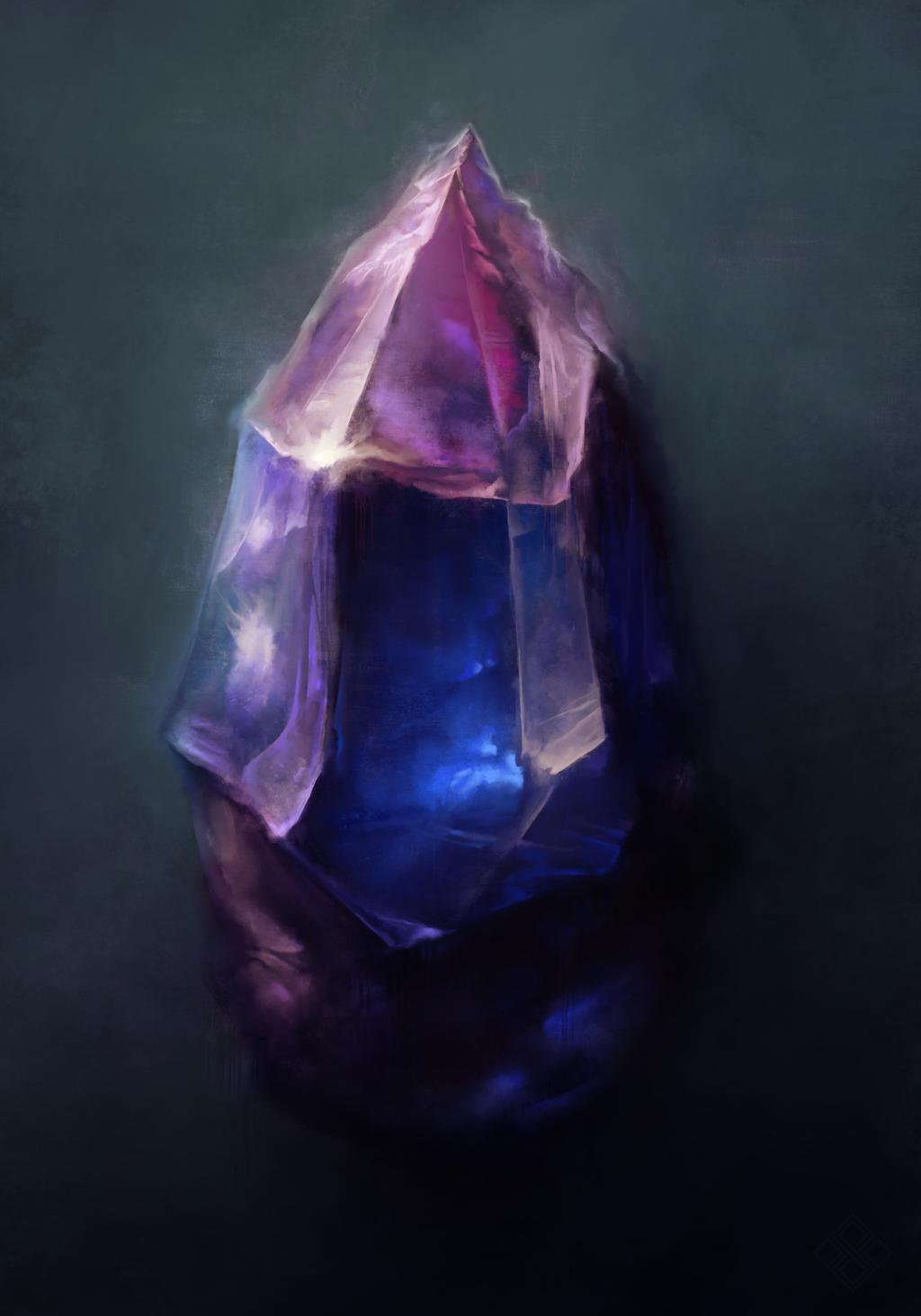 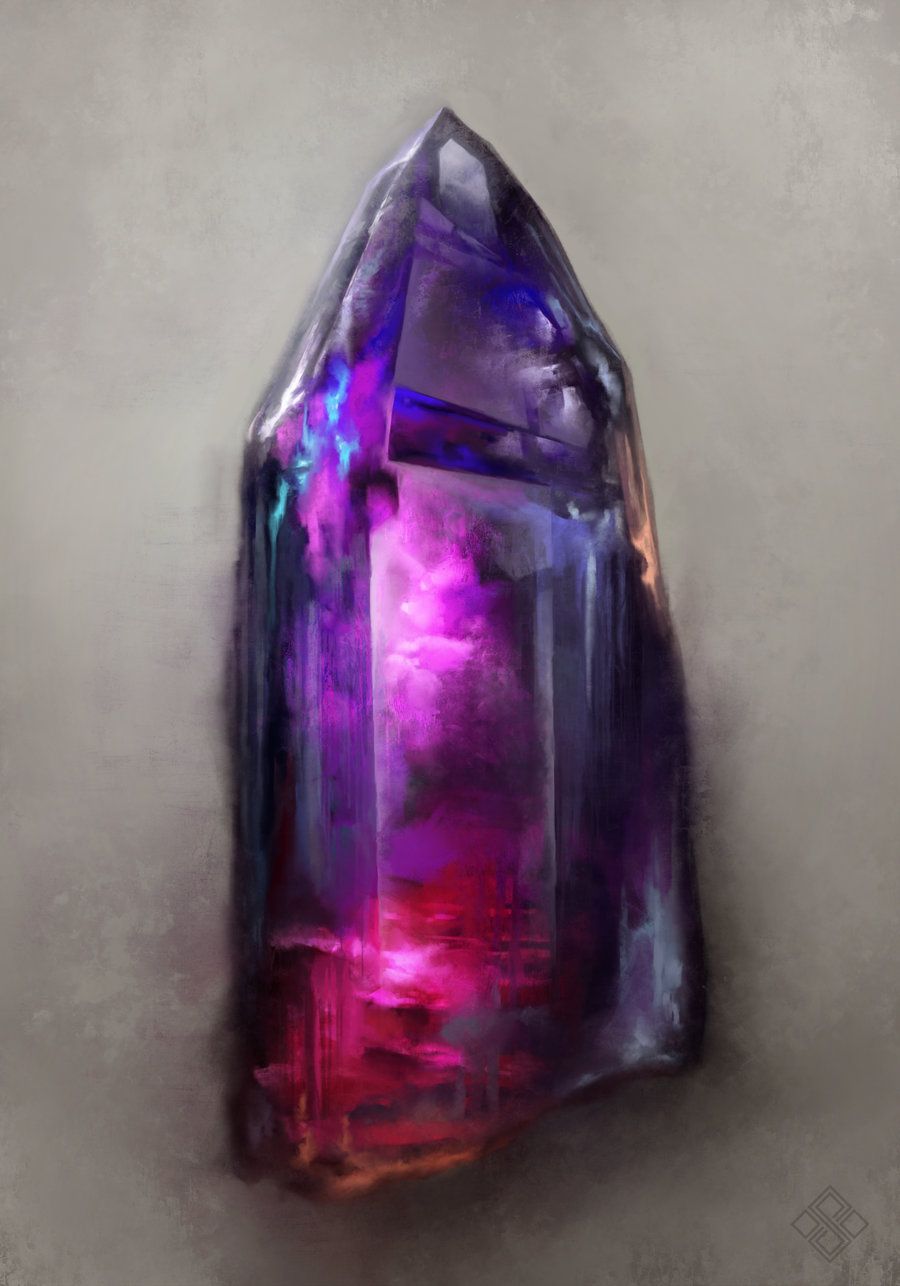 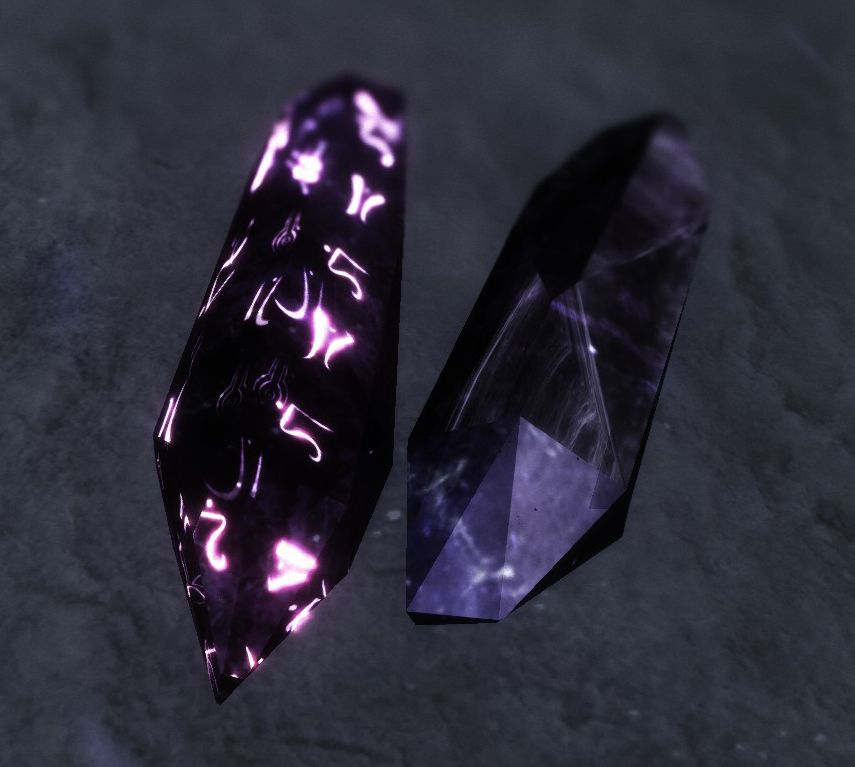 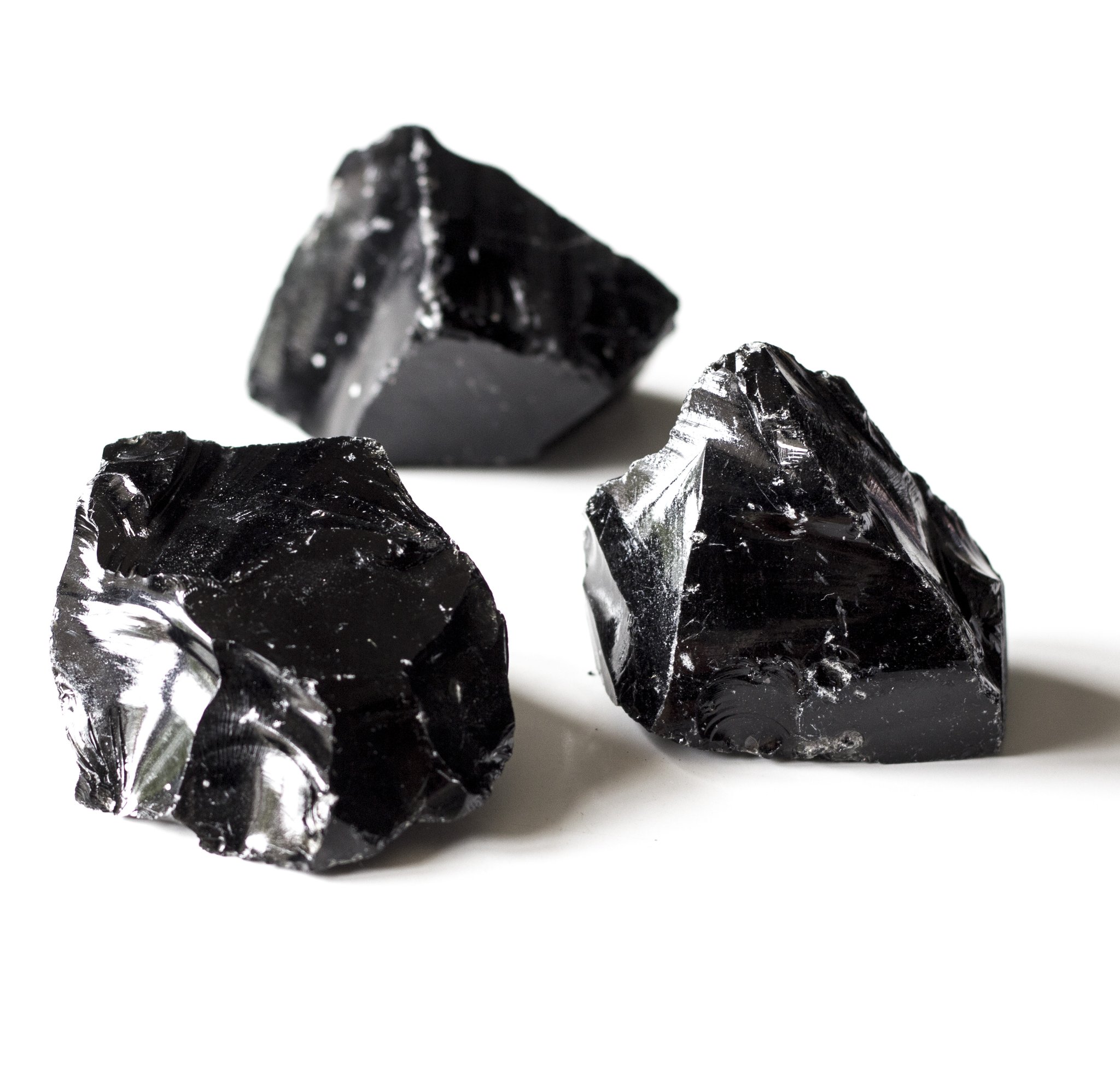 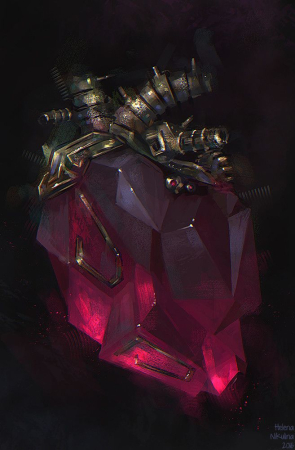 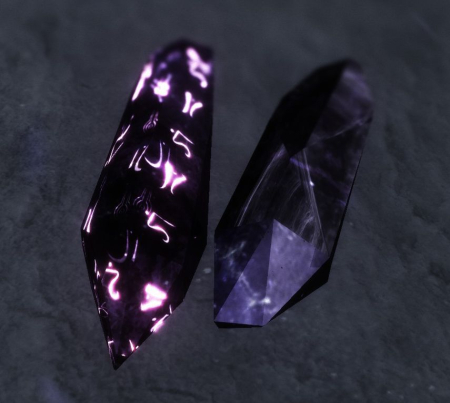 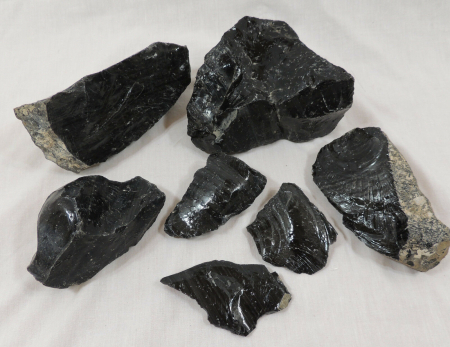 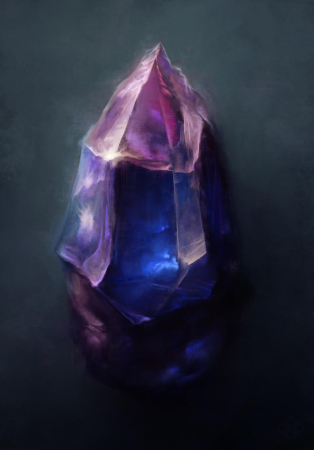 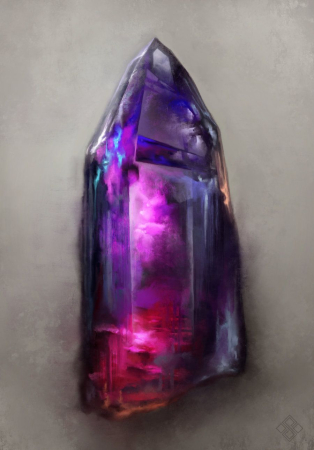 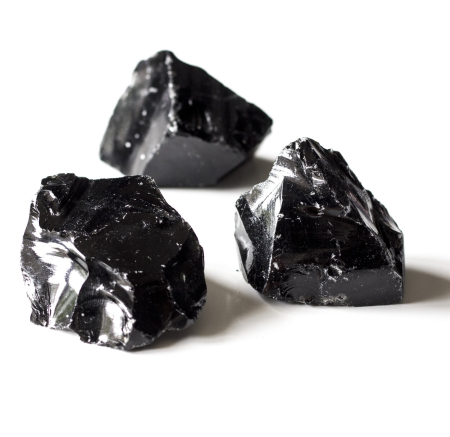