The Silver River flows from The Eperom Wall through the eastern end of Antauustret and out into Whitestone Bay. While it is not the largest river on the continent, its locations is the connection point of Antaauustret and Uuper Brahhruu to Nog Hhreud.

Southern Reyvik Fort
At the southern end of the Eperom Wall where the Silver River starts lies the southern fort of Reyvik controlled by the Teuta Eisom. With its close proximity to the Silver River, the fort holds a large fishing village that helps feed the three forts. Due to the rivers soft current, small ships are able to transport resources up and down stream. From the fort the Teuta are able to transport food and other resources down stream out into the bay.

Noorland
At the base of the river lies the Eperom Mari Trading Company city of Noorland. The city has not only become a trading hub between the Teuta and The Company but it has become a melting pot for many races.

The Silver river flows down from the ice caps of the southern end of the Eperom wall. The northern end of the river is surrounded by the cliff side of the Emerom Wall. As the river snakes further south, it opens up into scattered forests and lowlands as it heads towards Whitestone Bay.

The rivers waters are freezing cold year round, because of these temperatures only a few native species of fish make their home here. Along side the river are a variety of trees and shrubs. Strong icy winds flow down the Silver River from the Eperom wall and cause the surrounding areas temperatures to drop further than other areas of Antaauustret, because of this the plants and animals of the area have been hardened and are often unappetizing and nonedible. This has caused the main source of food for the area to be solely from fishing and imported foods.

The river has an metallic shine to it due to the rivers contact to high amounts of silver that's embedded into the mountains. Prior to the construction of the Reyvik forts, mining from various guilds and organizations almost made the river uninhabitable. When the Teuta established their foothold on the region they instituted restrictions on mining at the head of the river as the areas main source of food was causing many villagers to get sick. While the river still has its shine from silver deposits, the fish from the river are only sold locally as the residences of the Forts and surrounding mining camps have built up a tolerance for small amount of metal.

Atros Root
Also known as black root is a common flower found in Uuper Brahhruu & Antauustret. The plant is known to have a slight numbing effect when the flower is eaten raw. Over the years its been found out that if the plant is boiled in water the flower becomes highly potent.
Silver Nosed Salmon
The Silver Nose is a hardy fish that is commonly found in the Silver River. They can be fished years round as constant cold temperatures of the river creates an almost never ending breeding cycle. On average the adult Silver Nose they measure up to 3-5ft long and weigh about 80 pounds. The Silver Nose is the main source of food for the surrounding area.
Red Toothed Piranha
Behind the freezing temperatures of the river, the Red Toothed Piranha is the 2nd most cause of death in the Silver River. Only measuring around 8in long and weighing up to 2 pounds, the Red Toothed Piranha has hundreds of razor sharp teeth and only hunt in packs. The Red Toothed Piranha is dark grey and blends into the deeper parts of the river, making it even more dangerous as the schools of Piranha are not visible at the surface. Fisherman and merchants who have only fallen in only for a second have dropped dead minutes later as an un-seen Red Tooth has bitten through their skin and ate them from the inside.
Regskis
Referred to as Kingfishers in common speak, inhabit river areas eat small fish, insects and freshwater crayfish. In the area surrounding the Silver River, the Regskis hunt the Red Toothed Piranha. They are known to circle the river and dive in grabbing the Red Toothed. They are identified by their dark blue back feathers and a golden underbelly.

The river itself is an important food and water source for the surrounding settlements. As the river runs from the Eperom wall to Whitestone Bay, there are scattered forests that have provided timber to local settlements. One of the main resources found at the head of the Silver River is the Atros Root. The root is highly sought after by The Company, as there is a large demand for the medicinal herb. With the Teuta having full autonomy of the river, the trade of Atros Root is carefully controlled.

~4600 BCE - 4679 BCE
For almost 100 years different organizations and guilds have used the silver river to transport different ores from the mountains out into the bay. Shady practices and careless actions of the miners and captains eventually caused a downturn in health of the Silver River and its surrounding area.
4680 BCE - 4650 BCE
After the Teuta established a foothold on the region, they began to get sick from the high amounts of ore that was being dumped in the river and the surrounding area. In an attempt to not be driven from the key position, the Áki te Tueta sent word to the forts Gothi to institute restrictions of on the local guilds to help stabilize the regions environment. While most followed these restrictions to help reduce death and sickness for their own workers, a Company Man by the name of Cornelius, began a series of skirmishes in an attempt to drive the Teuta out of the area. These skirmishes lasted for 3 years from 4653 BCE - 4650 BCE.
4653 BCE - 4650 BCE
For three years the Teuta and The Company battled for control of the Silver River. For three long years each side would fight fiercely to control not only the head of the river but also the base. After word began to spread of the conflict, the Heads of the Sea learned of Cornelius actions and eventually sent 7,000 troops to the area to end the fighting and arrest Cornelius. For his crimes of instigating violence for profit, he was drowned in the river and his body left to float out to sea. The Heads of the Sea struct a deal with the Teuta to fix their relations. The Teuta were to be given full autonomy of the Silver River and in exchange The Company would establish the coastal city of Noorland to help the flow of resources through the area.
4650 BCE - Present (4400 BCE)
The environment around the Silver River has flourished under the guidance of the Teuta. Alongside this, the coastal city of Noorland has flourished to become one of the main trading hubs between the Teuta and The Company.

At the birth of every child of the Van Kan Family, the family makes a pilgrimage to the Silver River to anoint the child in the rivers water. They believe that the shine of the water brings good luck to the child and that the Red Toothed Piranha's will come for the child if they are weak. 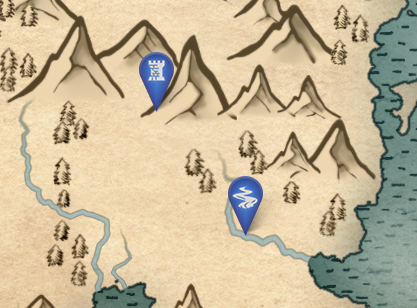 I really enjoy the chronological play by play of the history. I think it really helps flesh out the river and make it feel real within the world. Definitely keep it up! This deserves way more attention.

Thank you. I appreciate it!

Cool article! I clicked it because it has almost the same name as my article in the competition :D I liked the chronological history too, but I' like to know what date is the "present" in your world?

Thank you. I appreciate the feedback!

Nice read. It is good that they managed to limit the amount of mining done and make the river a bit better. But it must still be beautiful to see the metallic shine even though it is less now :p