The Tolpereth Halfling Canine Cavalry is legendary in Kementari for its ferocity and cunning. Made up of Halfling archers mounted on fast moving, huge wardogs, they fade in and out of the wilderness to harry and harass the enemies of the High King of Tolpereth.

This is a subset of the militia raised by the Halfling settlements in Tolpereth in response to fuedal levies. Fighting age members of established and wealthy Halfling families and clans will populate these units, and they serve separately under their own command structure under the liege lord who has summoned them.

Members are privately equipped with varieties of light armor, usually with shortbows and small arming swords. Bucklers are often carried for close in combat, and daggers, throwing axes, and slings are used for backup weapons. The mount is a large wardog, but barding for the mount is rare.

Members recruited from a family serve together, then the formations are built up geographically (by village, then region, etc.). The most socially prominent or experienced will usually lead a given detachment.

The wardogs can move relatively quickly due to their endurance, and these troops are often used for scouting and skirmishing ahead of and to the flanks of the main force. They use hit and run tactics, and if cornered, enemies quickly realize that 45 lb Halfling archer AND a 150 lb. wardog are a fearsome combination.

Being a wardog mounted force, the mounts require meat for feed, and a lot of it. Now, if the units are seeing a lot of combat, meat often provides itself, adding to the units' reputation of ferocity. If they are not allowed such forage, then appropriate supplies will need to be arranged for and provided by the summoning liege lord.

These units are feudal levies, and serve as such. As a result, required service after the terms of the feudal obligation have expired requires payment at standard mercenary rates, in addition to food, shelter, and other expected supplies for a mounted archer and a wardog.

Again, these are fuedal levies from the established families and clans of the Halflings living in the Kingdom of Tolpereth.

There is an ancient Halfling legend of The Wolf Rider, who taught them to domesticate wolves and started the partnership between them and dogs.   Wardog cavalry are seen as the elite warriors of Halfling culture.

These troops were used by the old Romenic kingdoms that eventually merged to form the Kingdom of Tolpereth. You may also see variations of these troops used wherever Halfling settlements exist in Kementari, but those those from Tolpereth are the best known because of their more recent and extensive use. 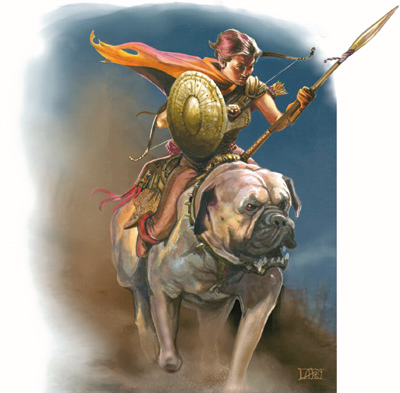