We turned down the left path through the Forest. It was eerily quiet, no birdsong, no insects... But then, the Red Forest is always quiet. We heard a rustling in the underbrush ahead of us, a faint glow appearing. None of us expected to see a White Hart... An adult, no less! The mask and the horns glowed so brightly in the dark... It was almost like finding sunlight. As soon as it had appeared, it ran off, leaving us in darkness once more. Clearly, this was an omen from the Great Mother herself, blessing us on our journey.
— An excerpt from a Hunter's journal.

White Harts are Celestial Beasts living in the Red Forest of Shikahn. These creatures appear similar to deer or elk, but have been twisted and changed by Celestial Magic, becoming something that only appears related. Like all Celestial Beasts, White Harts are seen as omens. Usually, due to their apparent docile nature due to their visible similarities with deer, White Harts are seen as omens of favor from the Gods, the Huntress in particular. Any who have been foolish enough to attempt to fell one would tell you otherwise.

White Harts are of incredible importance to the Hunter Academy. Their patron Goddess is said to be able to turn into a Hart in times of need, and is often depicted riding a Hart. Young Hunters, known as Fawns, venture into the habitat of the Harts as a part of their graduation ceremony, to allow for their Goddess and the Harts to judge them worthy of earning their antlers.

From afar, White Harts appear to be elk with unnaturally white coats and oddly colored antlers. Once they begin to move, one will notice the sparkling opalescence in their fur, and the unnatural amount of legs. White Harts are gaunt no matter how much food they consume, not making them a hunters first choice in prey. Both male and female White Harts grow antlers, though the antlers of females tend to be slightly smaller.

As White Harts grow to adulthood, the front of their face is covered by a bone-white mask that seems to grow from their antlers. The mask glows similarly to the antlers, and are highly prized as good luck charms. Similar to how antlers are shed by normal deer, the Masks are shed yearly. Once shed, the antlers dissipate from the shed mask, reforming on the still living creature.

In adulthood, White Harts stand at 4.9 feet tall at the shoulder, with females slightly smaller at 4.6 feet.

At first glance, Harts appear to be herbivorous, living off grasses, flowers, and the rare fruits found in the Red Forest. They are uniquely adapted to ingest the oddly colored and highly acidic red grass of the area, and cannot survive if taken outside of the forest. However, the truth of the matter is that White Harts are omnivores, and are perfectly content to attack consume other living creatures. Recent observation suggest that Harts are preferential carnivores, but will consume plant matter if kills are scarce.   There have been isolated reports of Harts killing and consuming esseni or dragons who find themselves in the Red Forest, but these have not been confirmed.

Exclusive to the Red Forest of Shikahn. Isolated sightings of Harts in other locations are always paired with sightings of the Goddess, Huntress.

White Harts are intelligent creatures, capable of understanding basic instructions and language. Whether they chose to listen is another matter entirely. 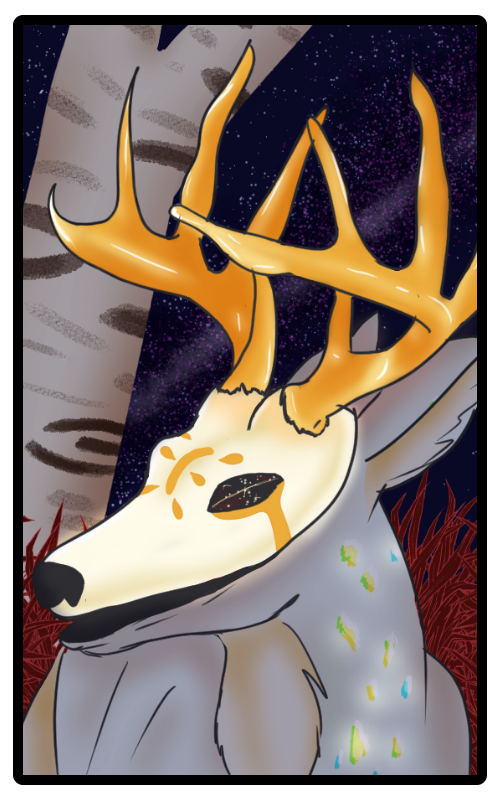 by CrimzN
Genetic Ancestor(s)
Conservation Status
White Harts are considered a protected species. This is not due to dwindling numbers, but instead due to the danger they pose to any that attempt to fell them. Additionally, Harts are considered sacred to the Goddess of the Hunt, and the Hunter Academy.
Average Height
4.6 to 4.9 feet high at the shoulder.
Average Length
7-8 feet long.

Such an eerie species, I can see why theyd be considered good luck, they're so beautiful! The format is really nice and clean too. : D

i want to see my little boy... also i have to admit, until i read about the extra legs, i actually didn’t notice them in the header?? n i c e... i too would consider a white and gold deer with sparkles in them good luck, nice article!

Wow that is an interesting species, seriously. I love your images they really round up the article. Well done! Concenring layout: maybe the tall image would be better placed in the sidebar? (And I will from now on refer to them as Sparkly Rainbow Deer!)