You know, this has to be the absolute coolest book of recipes I've ever written. Way better than that one about water.
I hate you sometimes, you know?
...what?
— Conversation between the Author and a friend

The Seventh Floor, and Castle Town within it, reside in a landscape coated in thick ice. As such, much of the cuisine of the top floor is based on the ice. However, until the late 1800's, the cuisine was based on beating the ice -- hot, spicy, warming food was popular. That is until Chef Alabaster Latimer wrote his defining book on cold, and ice based recipes.


Chef Latimer had been trying to make a name for himself in the culinary scene for almost his entire time on the top floors. In fact, as soon as he regained his hunger by climbing to the Fifth Floor, he wanted to be the towers most famous chef. He attempted to hone his craft while on the Fifth Floor, but the residents were put off by his Rodent Blood and Bark stew, and found his Grass Salad to be unpalatable at best. Latimer took his failure to heart, and vowed to improve -- so he climbed the tower yet again, moving to Senary on the Sixth Floor. He found himself an apprenticeship with an unknown chef in the Third Ring of Senary, and began to study.

If I'm going to be honest, and I'd like to be, I never imagined you could do anything special with ice. Okay, maybe you can make like... 2 tasty things with ice. But to come up with an additional 99? Alabaster's a genius. Pure genius.
— Book fan, Sixth Floor

Stories soon began to circulate through the inner rings of Senary, about a new chef who was cooking up a storm; all the wrong kinds of storms, however. Every single recipe that came out of Chef Latimer's time in training was nearly perfect; and yet, every single recipe had one small tweak or addition that ruined the entire dish. Sometimes, he'd decide a certain spice was needed in excess, ruining the flavour. Other times, Latimer would decide uncooked was a better way of serving a dish, rather than cooked. Each time he experimented, it angered his teacher more, until finally he was kicked out of the inner rings.   Chef Latimer took time to travel then, and find himself. He wandered the outer rings of Senary, getting to know the people, the farmers, the guards; he wanted to learn their tastes. Eventually, he tagged along with a crew heading up to the Seventh Floor. Alabaster Latimar had finally made his way to his forever home.

One might think that a meal consisting of at least 30% ice might be a bit too cold for a place like this, no? Well, its strange... after I Chef Latimers Ice Honeyed Ham, I felt this glow within me. I felt a warmth bubble up. As if I didn't need extraneous heat. As if my body was so happy with the meal, it made the heat its self!
— Unnamed Book Fan

Peppers -- spicy peppers, sweet peppers, big and small peppers. These little vegetables were cultivated to grow in the cold environment of the Seventh Floor, and were incredibly popular as culinary ingredients, to beat the cold. The peppers are still commonly consumed, but are now generally reserved for appetizers and side dishes, as Chef Latimer's Ice Cuisine has taken over the popular Main Course options. Chef Latimer likes to make use of any form of ice found in the mountains of the Seventh Floor, but a select few he seems to use more than others.

A very dry, powdery form of ice. Specifically different from snow, and even powdered snow. Powdered Ice is found atop the tallest peaks of the Seventh Floor. Powdered Ice is identifiable by it's near total transparency, and the way it shimmers -- every slippery particle of powdered ice constantly slides against the others.

Blue ice is always found at the bottom of the ice-pile. It's made of yet farther compressed Clear Ice -- it takes on such great pressures that it turns a deep shade of blue. Blue Ice still retains some of it's transparency however. Blue Ice is the last layer of ice atop the White Stone that Caste Town uses for it's architecture.

You grab the recipe book. It has glowing reviews adorning the front cover. "The 17th recipe in the book is my absolute favourite! My husband makes it at least twice a week! 10 out of 10 rating from us!" Intrigued, you flip through the pages until you find the 17th recipe.

Now, if you're anything like me, you probably love eggs. They go perfectly with so many meals! Before I really got into this whole ice-cooking business, boiled eggs used to be my favourite. But then, I came up with this wonderful recipe -- and now I have a new favourite way to consume eggs! This dish is rich and crisp, and has enough bite to really warm you up, all while keeping the trademark cool factor that the rest of this book follows. It's a fairly easy recipe to follow, as well!   Now, one thing you'll need to know before starting, is you have to be okay with having eggs raw. But, if you've made it this far into the book, you've probably already tried and loved my frozen omelette -- so this should be just fine for you! This dish serves two, but can be adjusted easily by doubling or tripling the amounts. 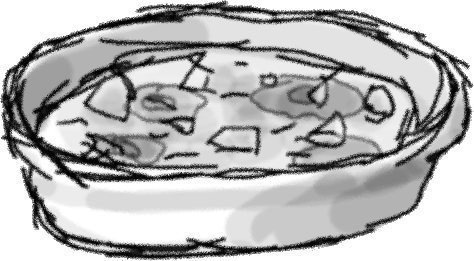 # You'll want to start by mixing your butter, crushed garlic, and spice water together in a stone bowl. Use a heavy wooden spoon to crush and mix the ingredients as best you can, until it forms a viscous paste. Chop up two of your small hot peppers, and throw them into the mix. You can include the seeds if you want, but I find spicy food overdone, so I like to omit them. # Then, prepare the third pepper by cutting it lengthwise, into 4 separate long pieces. Again, you may choose to keep, or discard the seeds. # Next you may prepare your cooking pan. You can use a large bowl if you like, but I prefer to use a wide, shallow pan. Take your two handfuls of blue ice inside, and drop them into the pan -- they should be gently sublimating at this point. Quickly coat the ice with your viscous mixture from before. The entire thing should be bubbling at this point. # Toss in your two handfuls of mini tomatoes, and then cover your pan. Grasp the pan firmy, and begin shaking it as hard as you can. You want to shake it for about a minute, but not much longer. The goal here is to break all the little tomatoes, but not totally crush them. Put the pan back down, and check on the mixture. If the blue ice is in smaller chunks, and the tomates have burst, you're ready for the eggs. If not, give it a few more shakes! # At this point, you may crack your eggs into the mix. Try to use a spoon to create small hollows in the mixture for you to drop the eggs into. Once all the eggs are in, cover the mixture again, and allow the ice to sublimate for 5 minutes. During this time, slice your bread, and ready it on plates. # After 5 minutes, lift the lid, and check the dish. It should be a softly frozen mixture at this point, and at the perfect state for serving. Use a large spoon to scoop out equal servings onto your prepared slices of bread. # Enjoy!

Noodles! You know, I can't think of a single person that doesn't like noodles. You can have them in so many different kinds of dishes. Sweet noodles, spicy noodles, savory noodles. Even cold noodles existed before my recipe book! When I was living in Senary, cold noodles were actually my favourite thing to eat, after a long day of studying the culinary arts. I'd want nothing more than a simple cold dish of wonderful, amazing noodles.   This dish is slightly higher in complexity than my other recipes so far, and it's the first time you'll be introduced to using Powdered Ice for something other than topping. But fear not! With my gentle instruction, you'll become an expert in no time. This recipe will require the use of a drill, all three versions of ice, and a hefty portion of butter. It can be prepared into various styles, but I'm going to feature the classic sweet version. Preparation time: 15 minutes. Cooking time: 5 minutes. Serves 1, but is easily doubled, with only a slight increase in prep/cooking time. 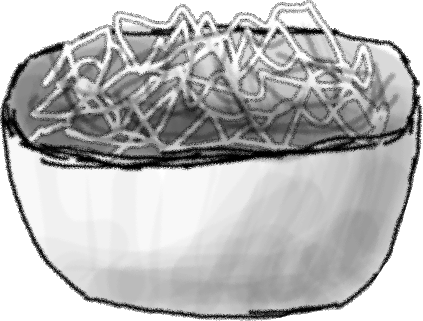 # Begin by taking your block of Blue Ice, and iron drill. Take the drill, and create 7-10 holes, equidistant to each other, from one end of the other through the block of Blue Ice. # Place the drilled block outside so it doesn't melt. # Take your two handfuls of butter, and drop them into your bucketload of Powdered Ice. Crack your egg into it, and toss one handful of sugar in as well. Using cold metal tools, stir the mixture until it's of an equal consistency all the way through. # Grab your drilled block from before, and push your mixture of powdered ice and butter through the holes. You can use the drill from before to force the mixture all the way through. Put a bowl on the other side to catch the noodles as they come out. # Quickly toss in your crushed Clear Ice, and let sit for 30 seconds, allowing the Ice Noodles to harden slightly. # While the Noodles harden, throw your second handful of sugar into the mug of milk. Stir rapidly until the milk froths -- then, pour out overtop the ice noodles. # Serve and Enjoy!   P.S. You might enjoy mixing this recipe up a little bit by adding in extra bits! What I've shown here is the most basic version of Sweet Ice Noodles. When I'm feeling adventurous, I like to mix in some chopped strawberries, or other sweet fruits. 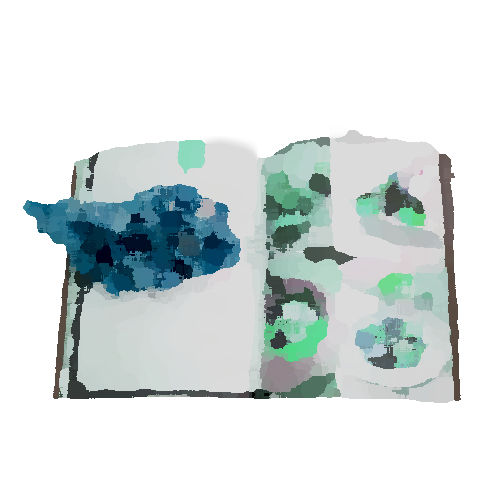 Finally, a use for all this cold. I give this book a solid 5 souls.
— Food Critic

You know, I was just saying to my wife, before the book came out, "honey, I really don't like spicy food that much anymore." And then Latimer releases this book! Ah, that was a good day. What's that? You want me to rate the book? uhhh... one hundred and one! I rate it one hundred and one ices. I don't care if it doesn't make sense!
— Common book fan

The recipes get a bit weak from number 79 to 86, but from 87 onwards... those have to be some of my favourite meals I've ever had. Absolutely fantastic. A worthy 9/10, in my opinion.
— Rival Chef, and fan