You've never heard of my ship? It's the fastest ship out of any dock in Ironrise! And also the most discrete. If you have cargo that you'd rather not have to declare that's something my ship can help with too. Let's be real clear on one thing though ... none of this comes cheap.
— Duncan Hendricks


Life for Duncan began in the Gainer River when he awoke choking on brackish water. The crew of a river trawler pulled him from the current and dropped him on deck. In those first chaotic moments of life Duncan was labeled as one of the mysterious Orphans and given over quickly to the agents of Epiphany. Like all Orphans, he was studied, analyzed and cataloged. When they found he possessed no special abilities or knowledge he was thrown out and left at the mercy of the streets of Ironrise. Home and family quickly became a thing that was always just out of his reach; something for other people.

He found himself navigating the criminal empires of Bell Harbor; taking small jobs from the likes of the Starks and Hugo Noble while being careful never to delve too deeply into their world. His only goal was to earn enough scrip to buy an airship and leave the filthy back alleys of Ironrise behind. However, Bell Harbor would not give him the time he needed. The city's police force began closing the noose around the Stark Syndicate's empire and Hugo Noble was gobbling up their territory and crushing anyone that would join him. Duncan had no choice but to take what savings he had and turn to the Ironrise Bank and Trust for the rest.

Today, Duncan is chained to his debts. He owes a great deal of money to the bank and has burned a great many bridges with the Starks and Hugo Noble. These worries would keep any other soul awake at night but not Duncan. When he runs his hand over the Ceylon's controls his heart calms and his mind clears. When his ship takes off nothing else matters and everything was worth it because he has a home and a family now. The Ceylon and the sky.


Duncan's life is one that's given rise to more enemies than friends but over life he's managed to hold on to a few good people that really matter to him. Maxie Burke has been a source of good information, repairs at a fair price and a mutual respect for each other's passions.


Katherine Harrington and her cousin Rose are the first two people that Duncan has felt a true friendship toward. While his feelings may have started with a more carnal intent, they've since evolved into a bond. These two are the kind of people Duncan wishes he could be. Heroes. They put their lives on the line every day for the good of others and for little reward but they do it without hesitation over and over. If he can play a part in their adventures than it might give some purpose to his life and that's an idea that's almost as satisfying as soaring through the skies of Spirel

Before he took ownership of the Ceylon, Duncan walked in very dangerous circles and when he left that life behind he did so as quickly and messily as possible. Men like Bart Stark and Hugo Noble have long memories and they haven't forgotten the broken oaths and betrayals of Duncan Hendricks.

Duncan Hendricks is a Mission Specialist character with a specialization in Mobility. Duncan's stats are very even spread making him ideal for taking on the first steps of any Endeavor with little preparation. His special ability rewards him for movement between cities so taking on missions that have stages taking place in several different locations is a benefit to him. Also, he can carry an ally with him between cities allowing him to take on steps in Endeavors and then allow his passenger to follow up on the second or third stage.

Duncan's weakness is his generalist stat line. Without padding his stats with asset cards Duncan will not be able to tackle Endeavor stages, Side Quests or Torments that are very slanted toward one stat. Also, all of Duncan's special abilities involve moving between cities. If he's stuck in one city or location he gains no benefits. 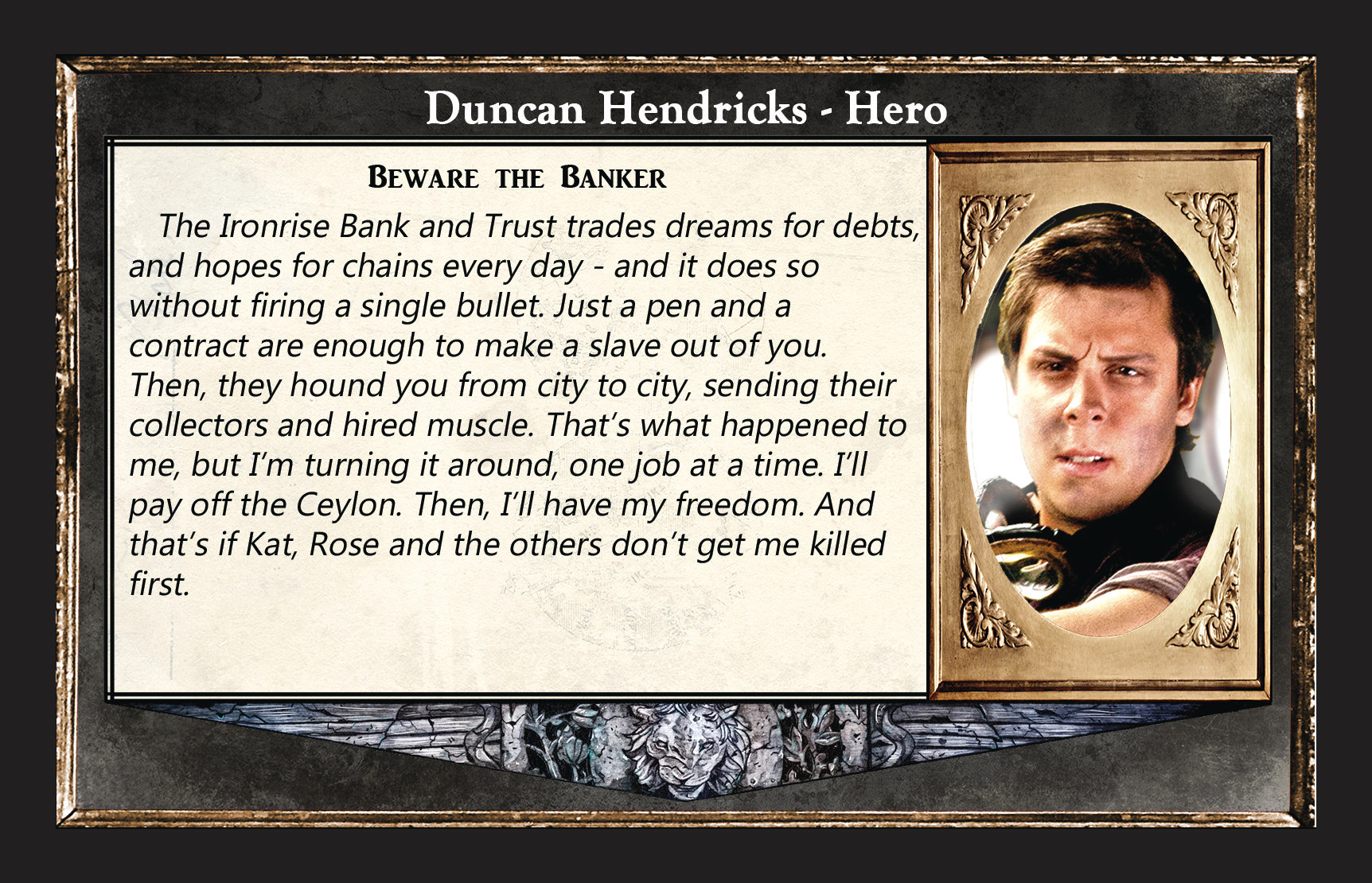 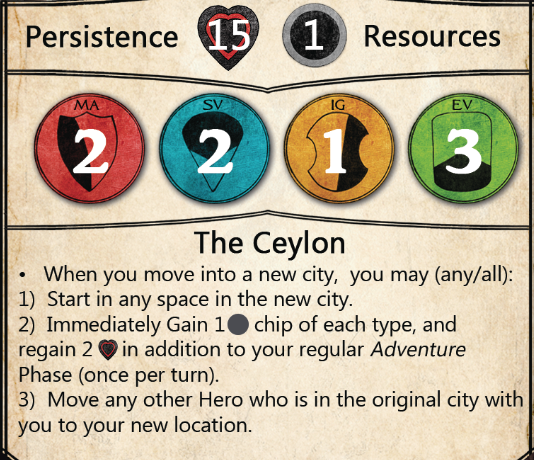 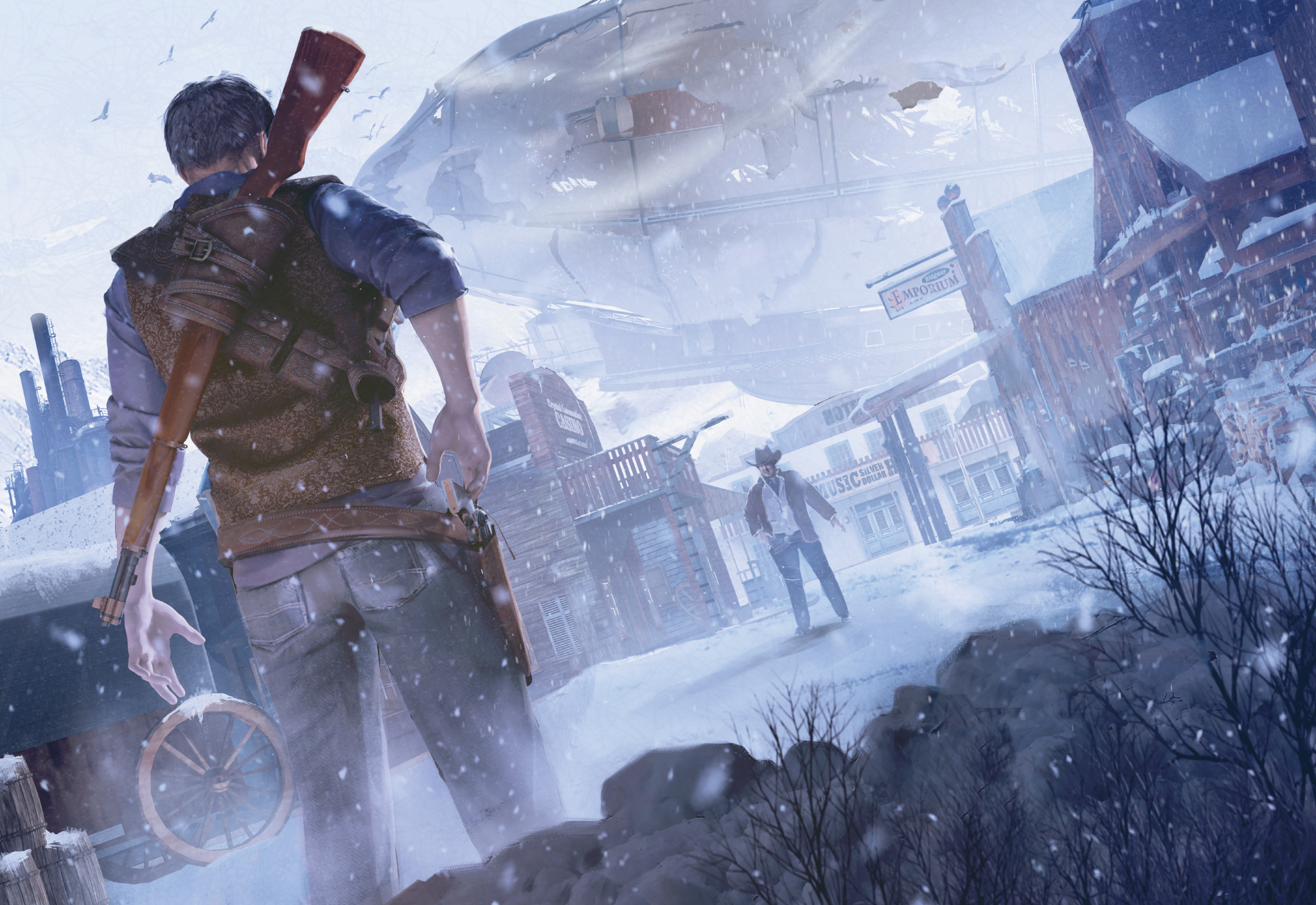