The history of the sons of E'Torrar deals with the events that took place in the past of Avan'Wanor, one of the two main countries of the Cradle of Stars today. After its emergence during the First Ascension, a large majority of humanity had to flee from the thrall of the Lords. No one really knows where mankind resided during its exile, but it is known that they returned to the island centuries later to find their cousins enslaved and transformed by the influence of their masters. After settling on the slopes of the Mountain of Stars in the centre of the the Cradle of Stars, the city of Stjarna'stoll was built in response to what was perceived as a divine sign.   Having renamed themselves people of the Mountain, the inhabitants of Stjarna'stoll and its surroundings gradually differentiated themselves into two distinct religious groups. After some unfortunate events leading to a civil war called the Fracture, the part of the population worshipping E'Torrar, the Solar Envoy, had to go into exile. Chased by their long-time brothers, the community migrated eastwards, further and further into the lands of the Lords, who, against all expectations, showed little resistance. Settling in the ruins of this civilization of unparalleled power, the sons of E'Torrar founded their capital, Roðtull'heill, in the first colonized province after their flight: Arus Fall. Over time their interactions with their neighbours have fluctuated while improving on average. At least until very recently. 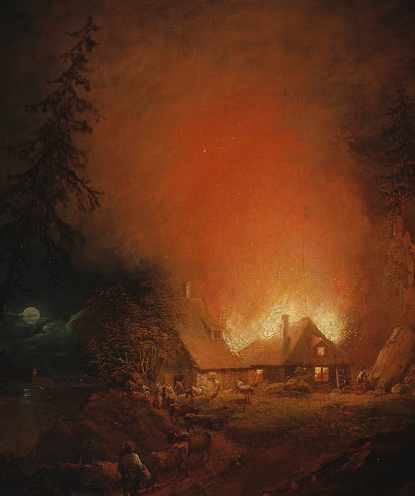 by Alexander Lauraeus
After many decades building the city of Stjarna'stoll on the slopes of the Mountain of Stars, the people of the montain met two entities coming from the top of the peak. Known as E'Torrar and Tunglanel, the majestic creatures with divine auras settled in the city, preaching for the cults of the Sun and Moon.   There were many theories about their nature and the reason for their coming. For many, they were envoys of the Lords or the Gods who had noticed The Golden Ascension. However, along with their gifts they also brought discord to the people. While the religions of the two celestial entities had been living together until then, different apostles and other prophets, under the influence of the newcomers, set the two cults against each other.       Anthur Beinersson, a prophet of the Moon Cult, called for a radical change of customs when one of the seeds offered by Tunglanel after having died by being exposed to the sun came back to life on a night of full moon. This seed gave the first moon tree, planted in the center of the courtyard of the Temple of the Great. Seeing this as proof of the corruption of the sun rays, the Prophet maintained that it was necessary to live far from the light of the fiery star.   In order to protect the tree, it was decided to cover the courtyard with large veils of cloth during the day to prevent the Sun from corrupting this sacred place.   Seeing badly this change, the followers of E'Torrar and the cult dedicated to the Sun tried to kill the tree by burning it. Stopped in their attempt, they then fought those who stood in their way. Several citizens died in this confrontation, which only aggravated already palpable tensions.   In the weeks following the incident, lunar idols in the temple were profaned and partially destroyed, resulting in the denial of access to the temple to sun worshippers.   This ban set the city on fire and led to a rebellion of part of the population who attacked the garrison of the city and various holy places. Many Moon worshipping families were designated as responsible and had to endure the worst abuses. After such a display of violence, the followers of the cult of the sun, having renamed themselves Sons of E'Torrar, were banished from the lands of the people of the montain and chased by their former brethren.

Hunted, E'Torrar and those who called themselves his sons began a great exodus. The Solar Envoy led the lost people to the East, to the territory of the Lords. One evening, after having put all these lost souls on the path of their salvation, E'Torrar left. His disappearance is still unexplained, he left as he came, alone, without a sound.

by ortheza
Several heroes like Arus the Preu took up the torch and led their people ever further east until they reached the coast. There they saw the ruins of the city their idol had told them about. There they built their capital, Roðtull'heill. They then continued to settle in the lands of the Lords, who were surprisingly absent. No one really knows what happened to them, but one thing is certain, their undefended territory was just waiting to be conquered by the newcomers.   A few pockets of resistance came here and there, but they were only made of humans, former servants of the Lords, who were not happy with this colonization. The greatest resistance was encountered on the island of Brunloc where many lives were lost to enemies beyond comprehension, and whose few survivors make supernatural descriptions that are fanciful to say the least.

The end of the war 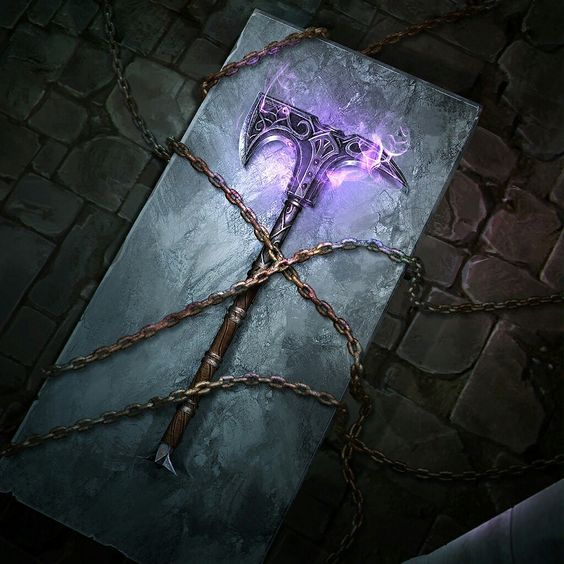 by Hoir Hiero
The fall of the island of Brunloc marked the end of the era of frantic expansion of the exiled people. The conflict with their former brothers, which, although spreading slowly, had never ceased, resumed with a vengeance. Investing all their efforts in the reconquest of the first territories they had trodden during their exile, west of Arus Fall, the sons of E'Torrar pushed back the almost uninhabited borders of the Red Hills.   The retaliation of the troops coming from Stjarna'stoll was slow because of a particularly harsh winter, but when they arrived they swept away the forces of Avan'Wanor. Forced to retreat for tens of kilometres, it was only thanks to Arus' sacrifice on the black waterfalls that a truce could be concluded and that Stjarna'stoll's troops did not march on Roðtull'heill. The peace treaty that was signed shortly afterwards and which established the borders was called the Crimson Treaty.   Its signature, although not much appreciated by the people, allowed the two powers to develop without killing each other. Indeed, the years of war had greatly weakened the lands of Stjarna'stoll, bringing famine and epidemics, while the nation to become Avan'Wanor did not even have a name yet and was unable to build itself without being in relative peace.

The creation of the government of Avan'Wanor 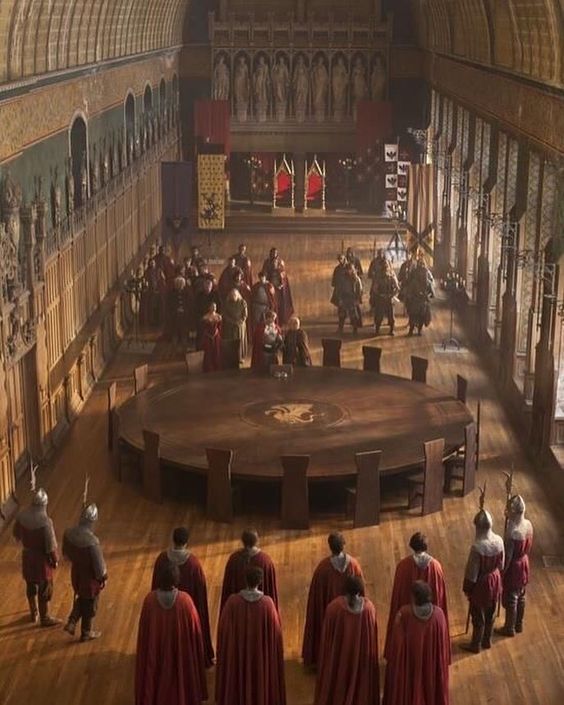 by extract from the TV show Merlin
Soon after the end of hostilities, the legislatures of E'Torrar united to build a nation. Choosing the city announced by their messiah as their capital, they named their newly acquired lands Avan'Wanor, the lands of the exiled. The eight families of the most fervent apostle of the solar envoy were erected as a ruling class under the name of the The Greate Families.   The latter would henceforth meet in council to guide the people of the sun. Wanting to break away from the model of the people of the montain, it was decided that universal citizenship would be given to all after a long period of obligatory military service. Built on the utopia of an egalitarian and united people, a new nation was born, Avan'Wanor. This organization was formalized three years after the Crimson Treaty, at the first Council of Great Families, much awaited by the population, which made this date a holiday that is still commemorated to this day. 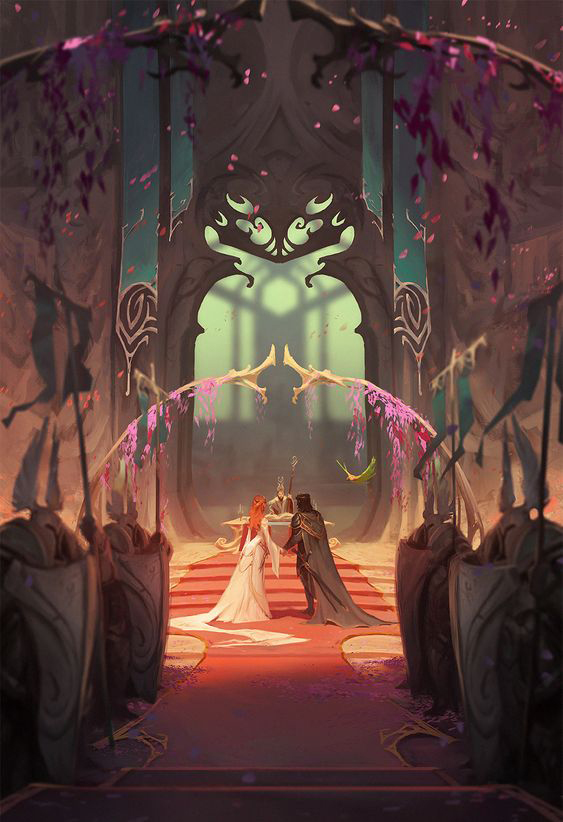 by Kairuiz
After the creation of Avan'Wanor, a gradual reunification with Stjarna'stoll took place. Although it was a long process and was done little by little on all scales, important dates marked this period of peace. Thus, seven years after the foundation of Avan'Wanor, the Unas family, one of the The Greate Families, married one of their daughters, Fillianor, to Gígjar Jörvason, son of Lara Bragadóttir, the Oracle of Moonfall. This wedding, to which the people of both countries were invited and which was celebrated in Roðtull'heill after having been consecrated in Stjarna'stoll, took the name of the Reunification Wedding.   Subsequently trade agreements were made between the two peoples. One of the most culturally significant products representing the understanding of the mountain people, the Oak Marble, was again exported to Avan'Wanor under the Brewers Agreement. This agreement regulates the trade in alcoholic beverages and brings in tax levies for brewers who work with resources and customers from both countries. The return of the Oak Marble made a huge impact on the masses with its symbolism. Advancing ever more towards an opening of the borders, pilgrimages to the temple of Stjarna'stoll and the Mountain of Stars from Avan'Wanor were organized and helped by the leaders.

The end of an utopia

With the disappearance of the Duke of Ashes while on a business trip in Lodorin, the long-buried tensions between the two nations were rekindled. The latter, being part of the Council of Great Families and being very close to Sovereign Bersi Asksson, left the border north of Ariglasia without general. 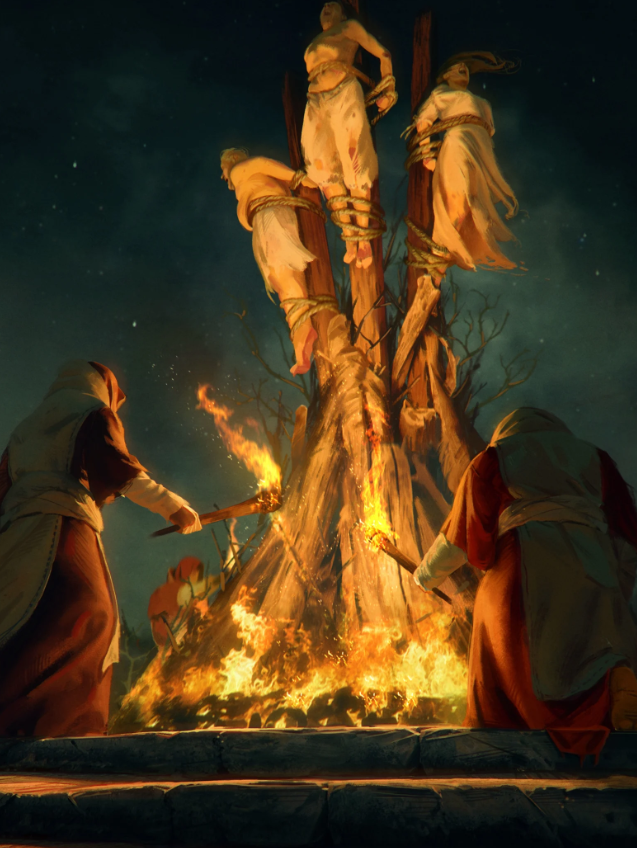 by Daniel Valaisis
In retaliation, the inhabitants of Gila were massacred by Roðtull'heill troops during the Flower Festival three years later. All of them, man, woman, elder and child, were put to the sword. This military action was strongly denounced by the Silver Shield, the regent of Roðtull'heill and de facto one of the most diplomatic figures in Avan'Wanor. As one of the arshest winters was preseen, she wanted to unite more and more with the neighbouring nation to endure the ordeal together, hoping for a clear improvement in the understanding between the two states due to this traumatic experience spent side by side. Loved by the people, recognized by the army and widely supported within the council, she was able to convince the entire nation to follow her in her undertaking. Alas, she was afflicted with an unknown disease and was quickly replaced by Yorn, who proclaimed himself the new regent of the capital while she was dying far from everyone, in the company of Pelak Brodirsson.   Once in power, Yorn organized a great reversal of strategy and went on a campaign against the lands of Silverwood while judging Pelak Brodirsson and his entire family for treason after it was discovered that Pelak had engaged in occult arts in an attempt to save the Silver Shield. Shortly after these border raids, the new regent desisted from denouncing the Crimson Treaty. With this, the period of peace between the two nations officially ended.

Your art is awesome, especially your cover image! The presentation is beautiful! Honestly, however, I find the history itself somewhat confusing. There's a lot going on, much of it in a single sentence. I would recommend parsing it a bit more, maybe by doing summaries of the events in the history section, and breaking down a bit more of it in the timeline? The ideas themselves are great, I am just having trouble untangling them. Best of luck in the challenge! 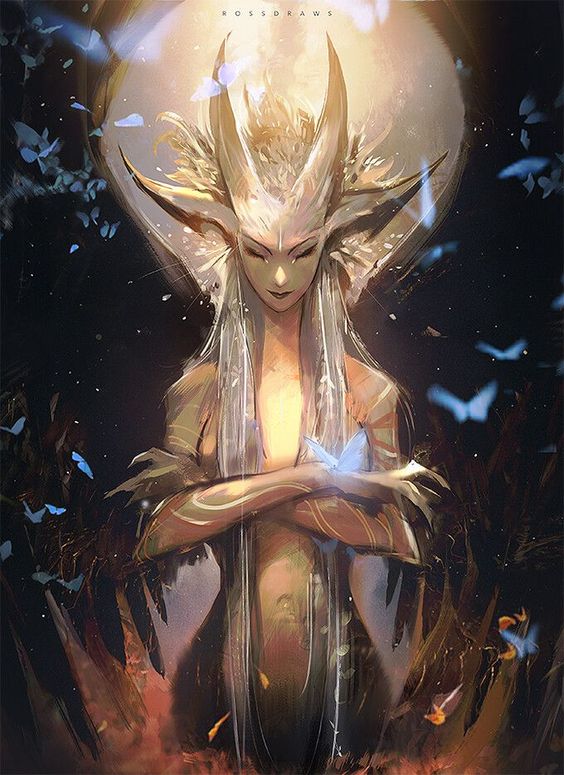 It took me some time to work on that and it aint 100% fixed yet but i tried to simplify lots of sentences :) I don't understand the summary part, could you explain a bit more please (sorry^^') Anyways thank you very much :D