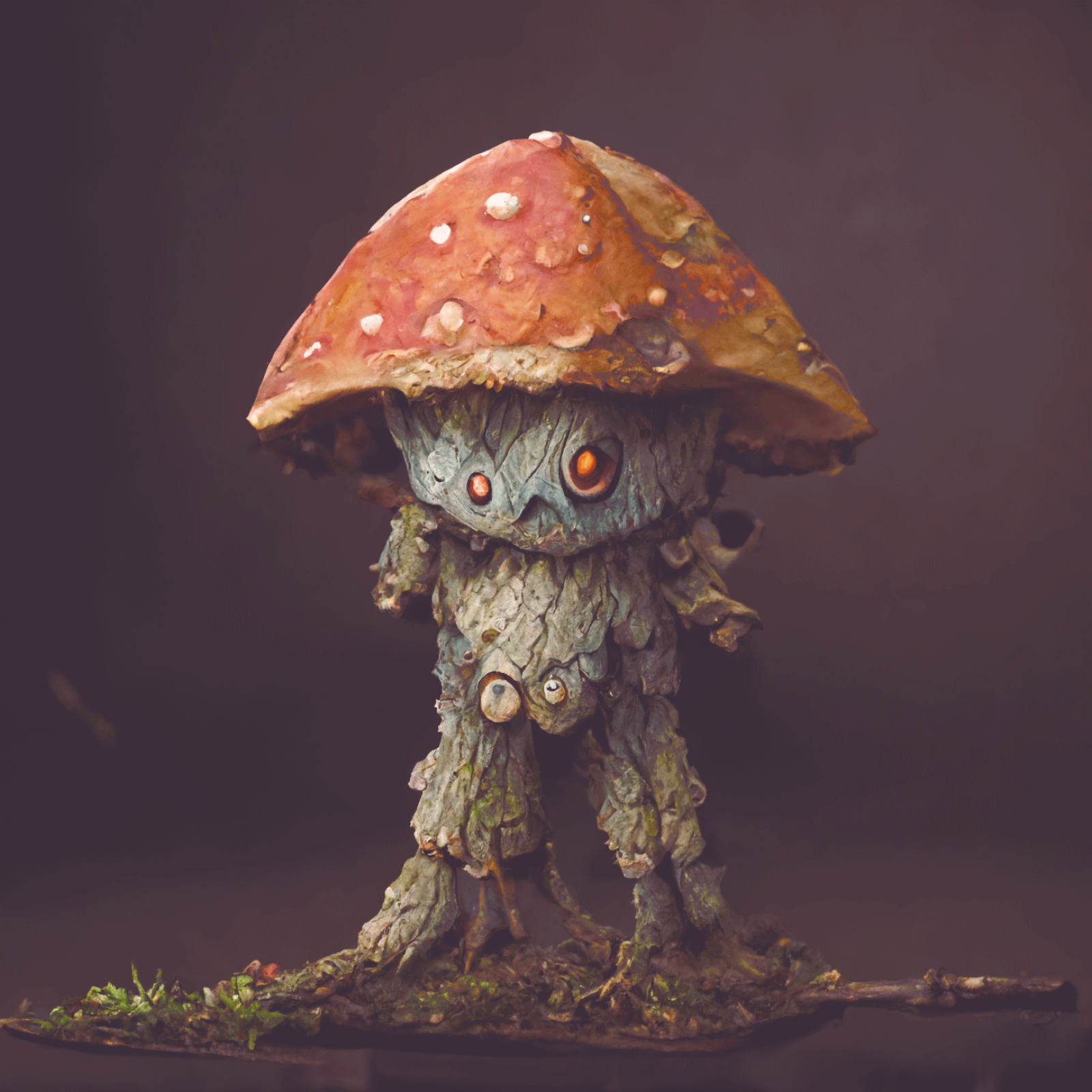 Jundi is a lone Shroomkin, who usually lives within but has become estranged from the Spore Mind Glomero Blightbinder.   They are part of the clan of Shroomkin who call themselves the Gloomglow Cluster, and have lived for generations within Glomero's influence.   Currently, Jundichiglo has fled the protection of their cluster within the Spore Mind due to the corruption they sensed overcoming the collective. They are not sure how it began, but they could sense the greed and gluttony that was so alien to their kind seeping across the Spore Mind like a sickness. It felt like the terrible and eager desire to consume and subsume - a growth without bounds and denial of the circle of life so revered by the Shroomkin.   Rather than be subsumed by this corruption, Jundi separated itself from the spore network and has fled into the outskirts of the Blight, desperate to find a way to heal Glomero and save its Cluster.   Meanwhile, Glomero wants to bring Jundi back into the Spore Mind, and has sent other Shroomkin of the Gloomglow Cluster to track them down and take them alive. Jundi is acutely aware that it will not take much. If they are exposed to the spore network, then their individual identity will easily be lost and the corruption will take them over.

This fleshtalk you do, it is too slow-hard. Difficult, like broke-rock-pebble. Not like Gloomglow-know-feel-together. Like wind and water. With you, it is all you-tell-tell, then me-tell-tell. No us. Not we. No GloomglowGlomero. You and Me makes it hard to feel.   But... also... it can be strange-free or happy-shocks. Can be something... new, unexpected? In fleshtalk you word-say "surprising."

Jundi has a squat central trunk that flays outward at the base into three short stubby feel, like a tripod. Their trunk narrows to just below their frilled head-cap which spreads outward two feet.    They can expand and contract gnarled fans along their side into wide shield-like protrusions, or as elongated root-like arms that include hands able to manipulate objects with ease.   They can form rudimentary mouth and air sacs that enable them to speak in broken words.

The convoluted cream, gold and red markings on their head-cap form a strange organic 7-point star, and are immediately recognisable by others of their kind.

When they move they spin on their three legs, with their top-heavy trunk swaying clumsily in counterbalance. it can reach quite high speeds doing this, but is not very stable doing so and will easily collide with things along their path. Stealth is only possible if they creep along at a snails-pace.

Like all Shroomkin, Jundi can communicate through tis spores almost telepathically, and when pressed can attempt to dominate other life forms with this ability. They avoid the technique as much as possible for fear of revealing themselves to Glomero and the Shroomkin who track it, and also because it reduces their own ability to resist domination in turn.

Jundi's long association with the Motu has seen them collect a variety of peices of metal and coral glass jewelry and even some peices of armor. In their flight from Glomero, they have fashioned a makeshift spear, and have a few stink-bombs and other chemical compaoinds on hand tat they know are useless against the fungal creatures that chase it, but may be used against other threats they may encounter.

Jundi was spored approximately 400 years ago, and spent nearly 100 years in dormant state before they awakened. Like others oof the Gloomglow, they have always been aware of themselves as a unique individual, but also as a part of the Spore Mind.   Over the 300 years since their awakening, Jundi has developed a wandering and curious mind. Not long after their awakening and long before the first Protectorate invasion of Tokaru, Jundi wandered far from the influence of Glomero and the Gloomglows. They had semi-regular contact with the goblins of Okuda and over the years became the diplomatic mouthpiece of Glomero, earning the title Farmind.   At that time, relations were good. The Tokaru goblins would bring coral glass, gems and metals to trade for the potions and organics developed by the Spore Mind. The Shroomkin of the Gloomglow, and Jundichiglo in particular, became fond of decorating their fungal bodies with the trinkets traded.   Farmind Jundi spent their long years travelling between the two worlds - enjoying the feeling of privacy and aural conversations that were surprising and fascinating at every level. Jundi would equally enjoy those moments when they returned to the embracing warmth and familiarity of the multitude within the Spore Mind Glomero.   When the Protectorates invaded, the trade with the goblins evaporated immediately. Jundi was horrified at the destruction they witnessed, but could do nothing to help their friends. Glomero and the Gloomglow withdrew into the Blight, forbidding all contact with the invaders.

Jundi feels intense anxiety at being permanently removed from the Spore Mind. They also harbour a deep guilt at having abandoned the goblins during the original invasion, that is being exacerbated by their current imnability to help Glomero and the Gloomglow Cluster.
Current Status
Seeking help to cure the corruption of Glomero
Current Location
The Blight
Species
Shroomkin
Age
348
Family
Gloomglow Cluster
Children
Gender Identity
Like all Shroomkin, Jundi is asexual and has no notion of gender.
Eyes
Deep black, no iris or whites
Skin Tone/Pigmentation
Tan with gold, orange and brown markings.
Height
4'6"
Related Plots
Characters

I love the complexity of the character with the backstory, description, even a sneak peek into their trauma. It is enough to make me feel like I am a close friend of theirs.   Thanks for a good read!

Thanks Angantyr! I think Jundi would be a good shroom to be friends with.