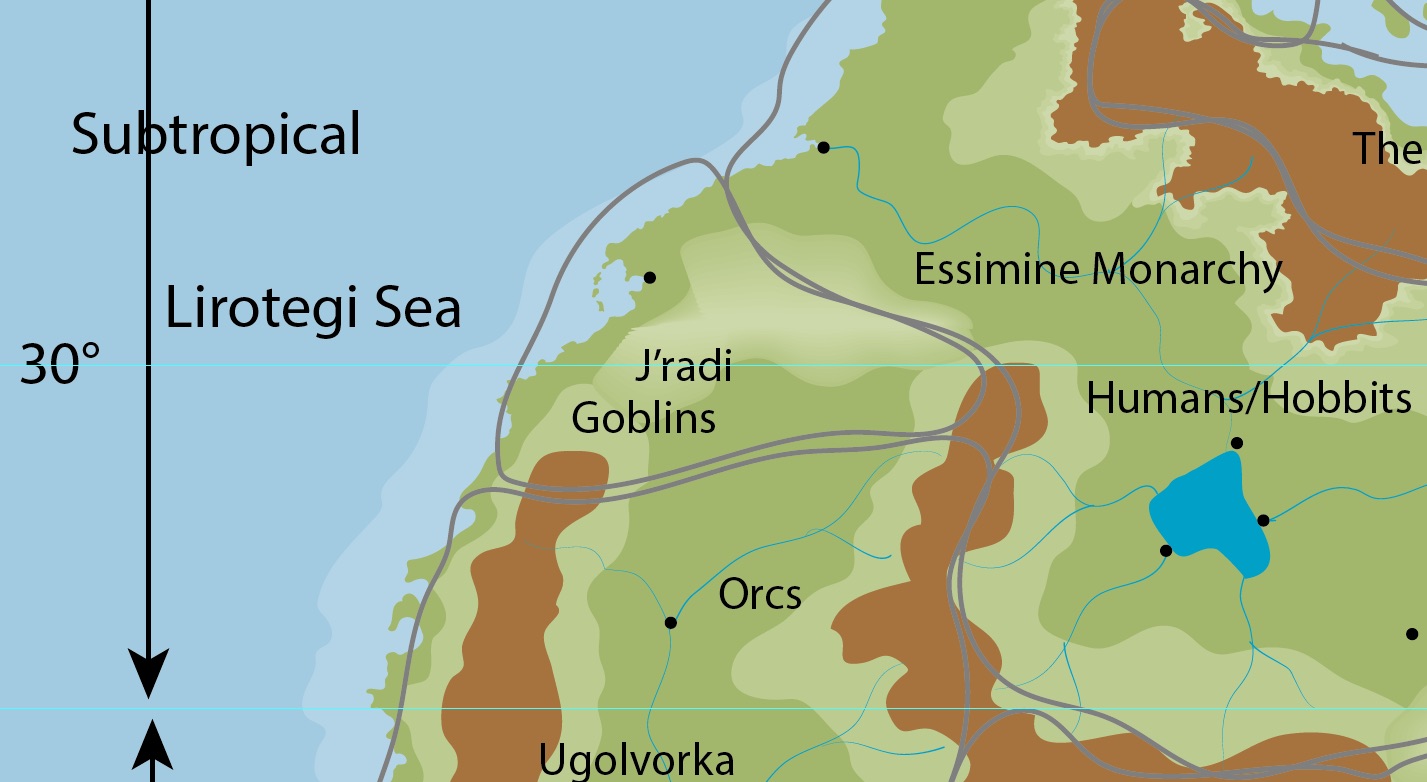 Situated on a highlands between the Essimine watershed and the Ugolvorka watershed, J'radi is an area of “dry” forest (primarily oak, ash, hickory, and alder) and scrublands. With proper irrigation, the land can produce decent crops. The goblins, however, have made it a home. Most of the coastline is cliffs, although there are scattered beaches and a very nice harbor, where the capital city of Kel’jiiki is situated. The city also sports a good sized shipyard. Primary export is acorn flour, sheep and wool, timber, and ships. It is primarily a Goblin-populated country.   The Goblins of J'radi are a bit more advanced than goblins in other countries. They have Architecture TL5, Land Transportation TL4.5, Navigation TL 5, and Sea Transportation TL 4.5. Their ships are considered the best in the world, and have begun to develop some new types of ships. While the rest of the world uses caravels, carracks, galleys, longships, and balingers, the goblins of J'radi have developed the schooner sailing rig, and the galleon.   Predominant Language: Mekiitagi   Current Events: Two things primarily worry the leaders of J'radi: Emperor Kyneth, and the Orcs to the south. Of the two, the Orcs are a more immediate concern. Orcs are rarely stable in good times, and now is not a good time. Their raiding has gotten more frequent, and there are rumors of unrest within Ugolvorka. Many goblin towns on the southern slopes have been raided and burned, and those towns are the most productive when it comes to food and timber. Despite this, shipbuilding has increased, as Essimine, the Small Kingdoms, and Farsskal have all increased their orders for naval ships. The government has ordered an increase of fortifications for the settlements of the southern slopes. This will be wooden palisades and cheveax de frise, and later stone walls, if possible.   46890 square miles

A wedge of land between the Essimine Monarchy and Ugulvorka, Jrade's lands tend towards the drier end of the spectrum. It isn't desert, but agriculture requires extensive irrigation systems. Not being a river valley, most of the water in the nation comes from wells and rainfall.

Jrade's military focuses on maritime forces. It's navy is, ship for ship, the strongest and best on the continent. It's smaller, but it's ships are more powerful than it's neighbors. Their army (more like marines, as part of their training takes place on ships) includes mandatory two year service due to their relatively low population and small country size.

The goblins of Jrade are ahead of the rest of the world in architecture, shipbuilding, and manufacturing processes.