This is a controversial topic to start with, as it changes with language and culture.

First what is a tack? Well, if a sail ship is pushed by the wind, it leans a certain way. The English will then look at where the wind is coming from and say the ship is on a port tack if the wind comes from the port side relative to the ship. But the Dutch, and most other continental Europeans, will say: No, the ship is leaning to the starboard, the boom of the mainsail is to the starboard, we are on a starboard tack.

This is all fair play if the crew of your ship is all from the same background. But shipping is by its very nature an international business, and the crews have been a mix of nationalities and cultures for centuries. And despite all that time, we haven't agreed on this yet. So mix ups do happen.

These mix ups are not really a problem, because it's usually pretty clear which way the wind is coming from. But collision avoidance rules for sail ships are written in such a way that they give right of way to ships who are sailing on either or the other tack.

A tack is also a short part of the sailed route, of a similar course, with similar sail settings. If you turn and change the sails, the ship is considered to be on a new tack. This is especially clear when you are tacking up the wind, or gybing down wind.

Due to the (hopefully forward) speed of a boat through the water. The angle the wind hits the sails is observed differently than if the boat would have been stationary. This is called the relative wind or the apparent wind (angle), and this angle changes if the speed of the ship changes.

Of course there are multiple ways to get a ship moving, sails, engine, towing, but also current. If there is a current, the body of water where the ship is in moves. The ship may not move through the water, but it does move relative to the seafloor. And! relative to the air. If there is enough current to pull the ship along at enough speed to create an apparent wind, this wind can fill the sails. And with this wind in the sails, a ship can pick up a bit more speed and keep a course. So on days when there is no wind, but there is a current. A ship can still sail.

This is also the way ships can sail faster than the wind. You can spot this in racing yachts, they almost always have their sails lengthwise on the ship, regardless of the direction they are going compared to the real wind direction. This is because they go so fast that the wind is almost always from an angle close to the bow.

As close to the wind as your boat can handle, right on the edge of the no-go zone. All the sheets are pulled tight. Spray is flying over the bow, and waves are trying to climb onto the deck midships because you are healing over like a drunk camel rolling down a dune.

All sheets slacked down a bit. A more relaxed sailing experience, the side walk stays dry, but there is still some spray. This is usually the fastest course a boat can sail. Also, it's possible to set your cup down on the table again as that is not at an insane angle anymore.

The relative wind is exactly from the side, everything is very relaxed sailing like this. A good course for cooking, and for visiting the head. Speed is still good, you are going places, comfortably.

The wind is coming from the quarter, one of the most stable courses, a well-balanced set of sails will keep the boat stable, you can walk away from the helm like this.

Wind is exactly from behind, Sails set to cover both port and starboard side. Sometimes you can have sails on both sides of the ship to catch more of the breeze. Yes, breeze, because at this course you will not feel the wind. You will not be going fast, as the relative wind angle is the same as the true wind angle. Also, there is a high change of accidental gybes on this course. Beware of that.

What is the port or starboard side of a ship is fixed. But windward and leeward side change depending on, the wind. Windward is the side where the wind is coming from. Leeward is the opposite side.

When giving helm orders, this is often done relative to the wind, to steer up or down. This might sound confusing, until you recon in the fact that wind propelled boats and ships lean over. Steering up in to the wind, a.k.a. to windward. Or down away from the wind to leeward.

The first time you get the command of a sail ship and you are expected to perform a manoeuvre by your self is a exiting moment, quite stressful with all the senior officers watching behind your back. 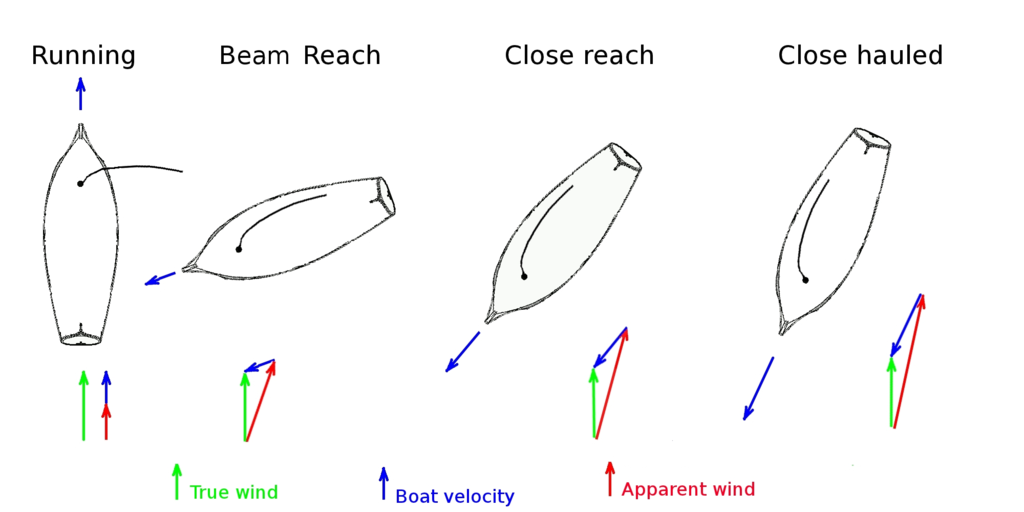 Points of Sail by Erwan1972 via Wikimedia Commons 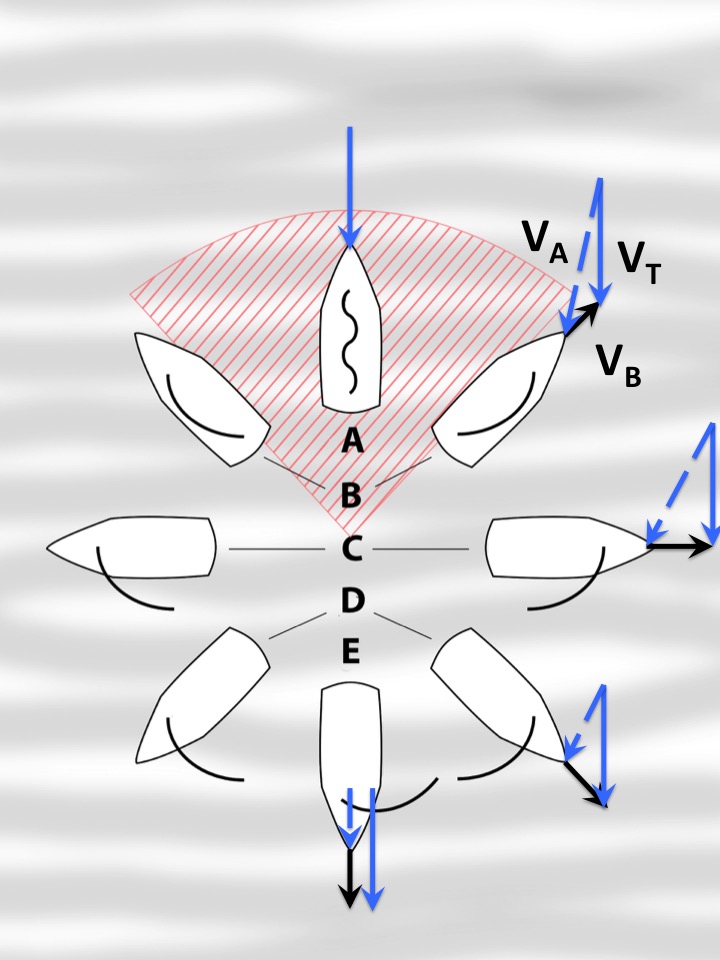 Points of Sail - With vectors by Andrew C via Wikimedia Commons

'and waves are trying to climb onto the deck because you are healing over like a drunk camel rolling down a dune.' This is my favourite description and gives such a great picture of what the ship is doing. XD   Great little vocabulary article! :)

Yeah! Several people have pointed out that they loved that. But I have to admit it was a very in the moment idea that I was really unsure about if I should leave it in.

I'm going to hold on to this information for once. Last time I had to sail it had been some time and I had forgotten most of the tricks of the trade. Will keep this book on me for the next time I'm in a world where sailing is the best way to get around. - Nemo, World Traveler

I learned a new term and what it means from this article. Well done! :D

I love how informative this is. You're very good at teaching through writing!

Thank you very much Han!