And when they pass from their mortal vessels they shall find themselves in familiar places, without memory, however. To relive once more their memories. Memories of bliss. Memories of suffering. It is these memories, those which of the utmost pain that they shall find themselves reliving over and over until they come to the ultimate realization. Death. An ordeal even a demon would find cruel.   And above, silently watching, the grand judges who deem whoever gets to move on to the next life. The Arbiters.
Kerimiil Scriptures of an Unknown Devil
A strange plane of existence and misunderstood by many, Purgatorio is the realm where human "mortal" souls go for judgment after death. The plane was created by Chronos shortly after the 4th Great Holy War. Purgatorio has many names but is often referred to as Purgatory, The Judgement Realm, or The Spiritual Realm.

A Plane Only For Mortals

Purgatorio is misunderstood by almost everyone for one reason: only mortals can access the plane, excluding the Arbiters already dwelling within. Upon arriving in the plane, people lose their memories, only regaining them as they complete an ordeal given to them by a mysterious species known as the Arbiters. Purgatorio is one of a handful of planes that cannot be found in the Crossroads without the Divine Crossroads Cartographer's Map, an item only held by a Primordial.

A Necessary Ordeal of Suffering

When a human dies, their soul leaves their physical body and passes into the realm of Purgatorio. It's unknown as to how big or small the plane is, but the soul will find itself in a familiar place. This place is usually the last place they were before their death. In all cases, the person will find themselves having no recollection of their memories. Thus begins their ordeal in Purgatorio.   The ordeal itself can vary in severity, depending on how quickly the person can recollect their memories and how accepting they are of their deaths. Some may be able to recollect almost immediately while others can take a seeming eternity.   The ordeal pits one to relive their memories in great detail until they come to the realization they are dead. This usually occurs upon remembering their final memory, their final moment before their death. It's here then they begin their final judgment, their true predicament revealed to them by the Arbiters. 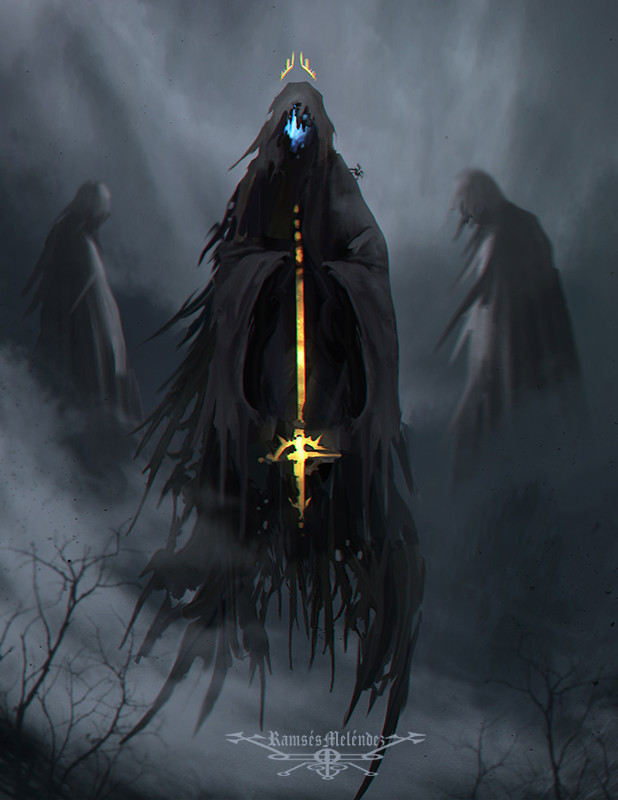 Postmortem Purgatory by ramsesmelendeze
asters of the 3 Pillars of Magic, the Arbiters are grand judges for those passing through Purgatorio and are the ones who put mortals in their ordeals, containing the knowledge and memories of the one they judge. The Arbiters are oracles in a sense, knowing everything about the ones they judge.   The role of the Arbiter in a mortal's ordeal is to judge whether or not they get to live in an afterlife, and if so for punishment or another chance at life. There are many factors when an Arbiter completes its final judgment such as the mortal's age, cause of death, and how benevolent or malicious of a life they lived.   Nobody knows who created the Arbiters. Some say they were created by Chronos, and others say that the beings are all actually as one, but individual minds.

In most cases, an Arbiter will allow a mortal to live an afterlife. In the case of those that led a life of malice, an Arbiter will still allow them into an afterlife, however, these souls don't receive a second chance. Instead, they are sent to realms of punishment. Whichever realm of punishment they are sent to depends on the severity of malice in their previous life. In some cases, in the case of those with no faith or those who pass from old age or natural cause, the Arbiter gives a choice to either live an afterlife or simply have their soul dissipated, never to find a physical vessel once more.   In extremely rare cases, a mortal will never accept their death, or even realize they are dead. These souls end up never receiving judgment, and after time, become lost and forgotten. These souls often find their ways back onto the Mortal Plane, where they exist as specters.

There are cases when a human's soul is tagged by an inhabitant of another plane. Most of the time, these people are tagged by an angel or a devil. Mortals tagged must still complete the ordeal in Purgatorio, but, the tag acts a "special" invitation to the plane of the inhabitant that tagged them. These tags supersede the Arbiter's judgment and force the mortal passage into their designated realm, whether they like it or not.

It's impossible to map Purgatorio due to every mortal passing through experiencing unique landscapes and worlds. The only ones that know of Purgatorio's design are the Arbiters, and they never leave the realm. It's theorized that the realm is a tower with limitless floors, each floor housing a single Arbiter in wait for the dead to enter. Each floor is thought to be empty and cold, a blank canvas that awaits the manipulation of an Arbiter.

Magic in the Realm

Purgatorio is not mana neutral and is on par with the Mortal Plane in terms of mana neutrality. There on limitations on mortals as to how far they are allowed to use their magic. In their ordeals, mortals can use mana to their fullest if an Arbiter allows. Once their initial ordeal is complete, they are restricted by the Arbiters into using no more magic. This to protect the Arbiter itself as well as to aid in their final judgments.
Purgatorio
Cover image: Castlevania: Lords of Shadow by Riot Pixels

Niiiiiice.   The youtube music was a great touch. Normally i don't listen to the music people put up, but one look at the Postmortem Purgatory by ramsesmelendeze I went back up and popped it on =)   Goooood move.