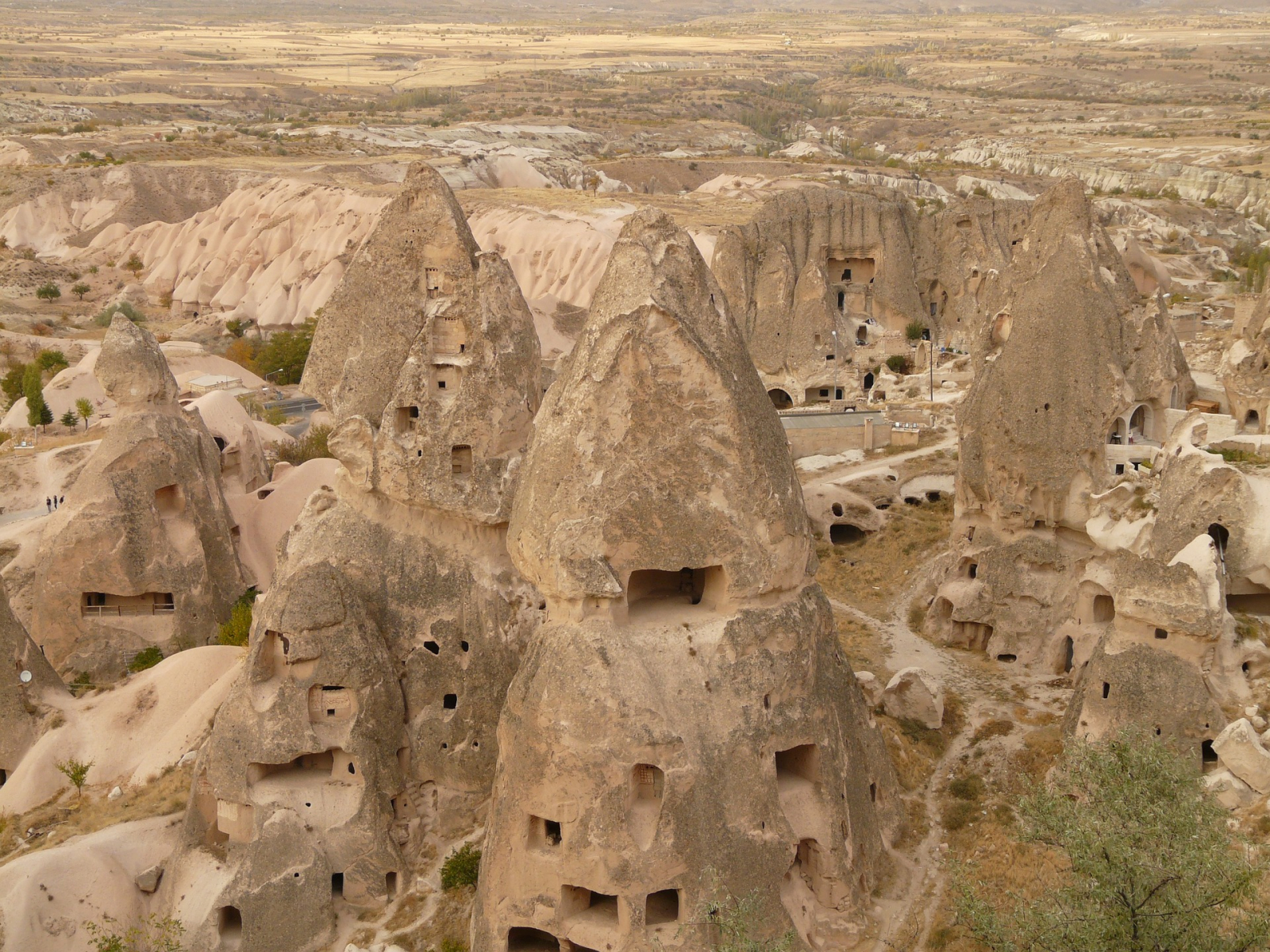 Men from the islands that were

The Hintadu people, which in their ancient language means 'painted ones' as opposed to the Pau Paladumá, used to live in villages, mostly carved out of tufa, on the coasts and islands of the inland sea before the Great War of the Mages. The conflagration struck them violently, killing several hundred thousand of them, and completely transformed the regions they occupied by draining the inland sea and turning it into the Arquir Desert. Since then, the surviving Hintadu have resumed populating the dry and inhospitable regions near the desert and travelling within it following the old routes they used to navigate across the inland sea, first in search of survivors, and then according to traditional seasonal migrations.

The village is my family

Hintadu usually live in small, separate, self-contained communities. Within these small groups they consider themselves all descendants of the village elders and members of one family. Often emotional and sexual unions are transitory and polygamy, homosexuality and gender fluidity are considered normal. Sometimes neighbouring communities develop violent conflicts that lead to open warfare, during which it is common for the victors to take prisoners to use as slaves, either for hard labour or sexual exploitation. Unlike western people who consider slavery immoral and humiliating, for the Hintadu it is normal and so is the slave trade. Over the centuries the larger communities have organised themselves into small kingdoms and principalities, especially in regions with natural resources of strategic or commercial interest.


My interest in Hintadu is deeply anthropological, they are similar to us and yet so distant from our mentality. I have experienced some misadventures among them, but most of them are capable of sharing great wisdom. I am sorry that many of us consider them only savages!
- Lucas Almeyda, writer, explorer and historian from Saythian.


Different and yet similar

Trying to describe common traits that encompass the members of the entire Hintadu population as a whole is difficult; although they identify themselves as a single population, their appearance is quite varied. Their complexion ranges from olive to ebony in colour, with several shades in between. Their eyes are usually elongated, their lips are full and their noses are generally potato-shaped. Some tribes adopt conspicuous tattoos, scarifications, or distinctive jewellery. They are often long and slender, with some notable exceptions, taller and more agile than Western populations. Their hair is naturally dark in colour, but some sub-ethnic groups use naturally extracted colouring agents.

Like social rules and aesthetics, naming customs vary widely. However, they are very different from Western names, among them it is worth mentioning: Amos, Ayele, Beno, Ephram, Habib, Shamir, Tambo, Yachim, and Zaid as far as male names are concerned, Aisha, Ariadne, Avah, Carmel, Istar, Masa, Sauda, Shera, Tchami, Yaarit and Zakia when it comes to female names. Many of these names are repeated within a village, which makes it very difficult for foreigners to associate the name with the subject of a conversation. 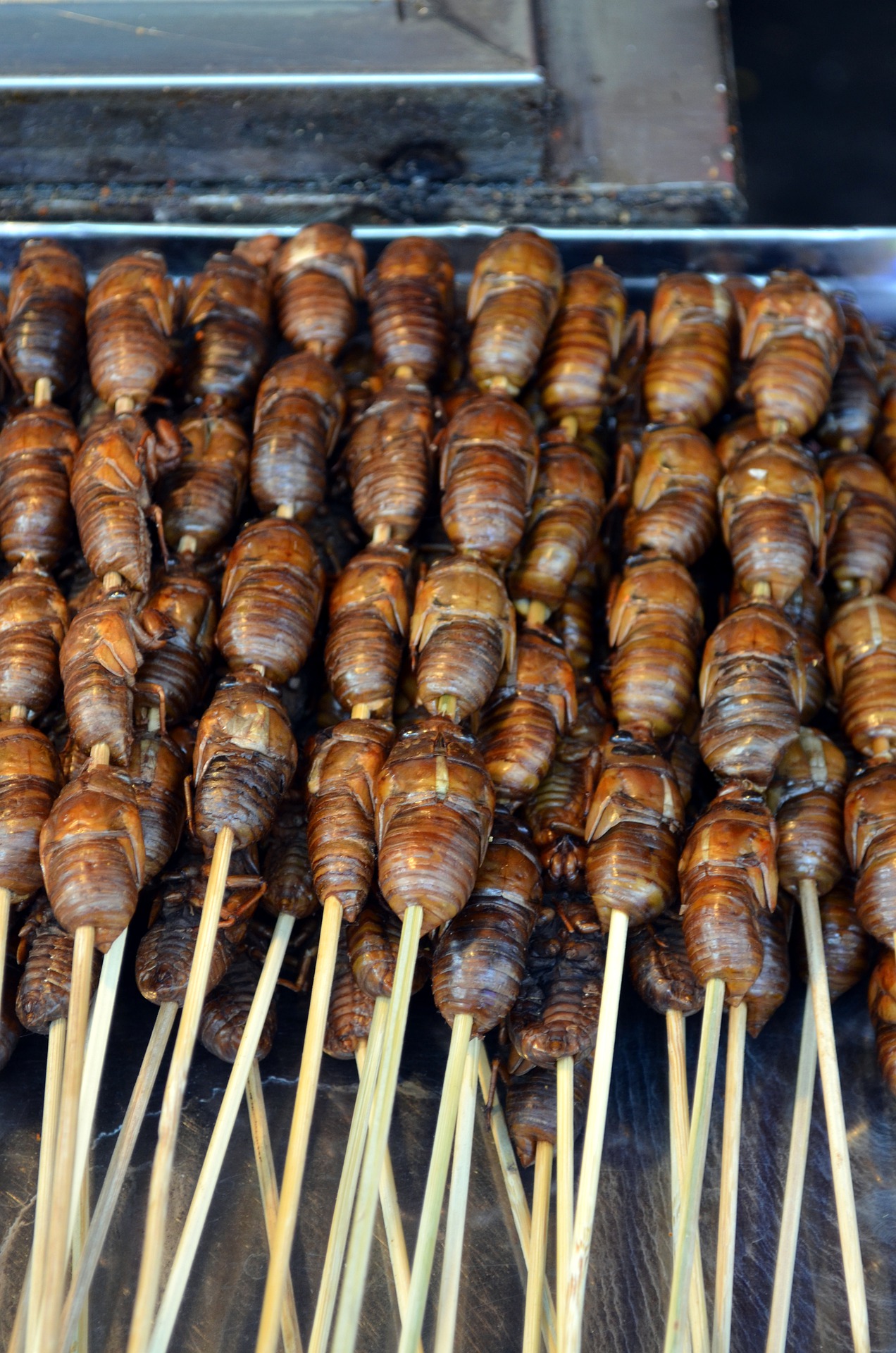 Hintadu consider it extremely rude to refuse an offer of food, but in many of the regions they inhabit it is quite difficult to raise animals or cultivate the land, so anything that can be harvested or caught can be eaten, sometimes fruit, roots, fish, but sometimes rather unusual creatures such as insects, reptiles or monkeys. These foods are eaten raw where possible, or cooked simply by grilling or smoking. Western adventurers who, out of hunger or curiosity, have tasted Hintadu food report that it is not too bad, rather bland but with a few tweaks it could be quite tasty. 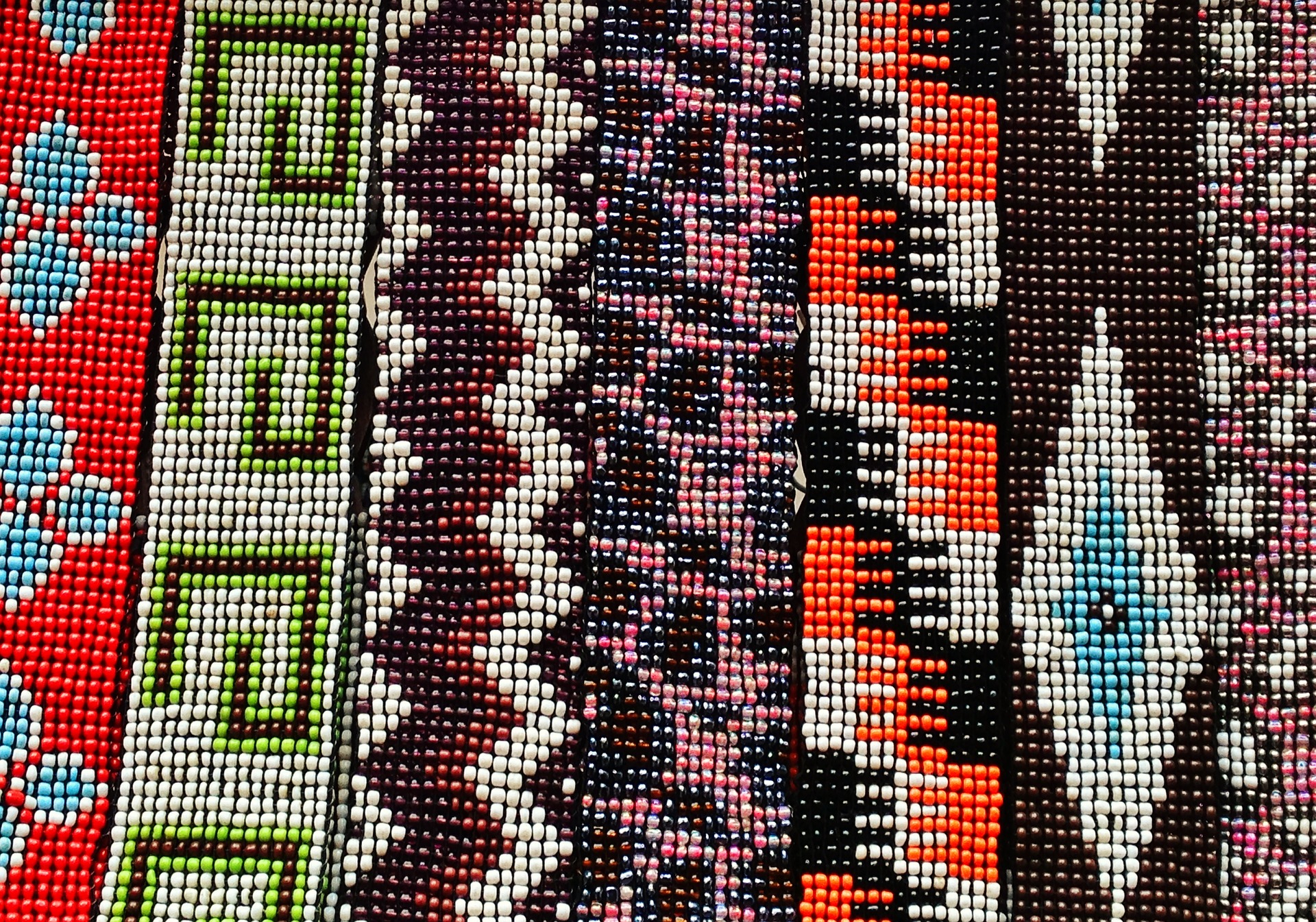 In the typical isolated villages frequently encountered in the regions inhabited by the Hintadu, clothing is usually very simple, fabrics decorated with geometric or nature patterns, often in the form of a long cloth that is arranged to cover the body, according to local custom, in a comfortable manner. The Hintadu have a different sense of modesty from Westerners and consider nudity to be normal, even in public. For victory ceremonies, marriage ceremonies, funerary ceremonies and going to war, however, ritual clothing is often adopted to instil fear in enemies and ward off spirits, malevolent and omnipresent creatures often generated by the Hintadu own faults. They vary greatly, some examples being distinctive hairstyles, ornate masks, bone bracelets celebrating the victims of a particular warrior and commemorative tattoos.


They believe in spirits that animate the elements and induce men to commit the worst evils. They practise rudimentary ritual magic that is offensive in the eyes of the divine Be Chuille, and have often reacted violently to our attempts to lead them to enlightenment. They seem fearless!
- A Kharmian Inquisitor.


A scary world of mysticism and spiritism 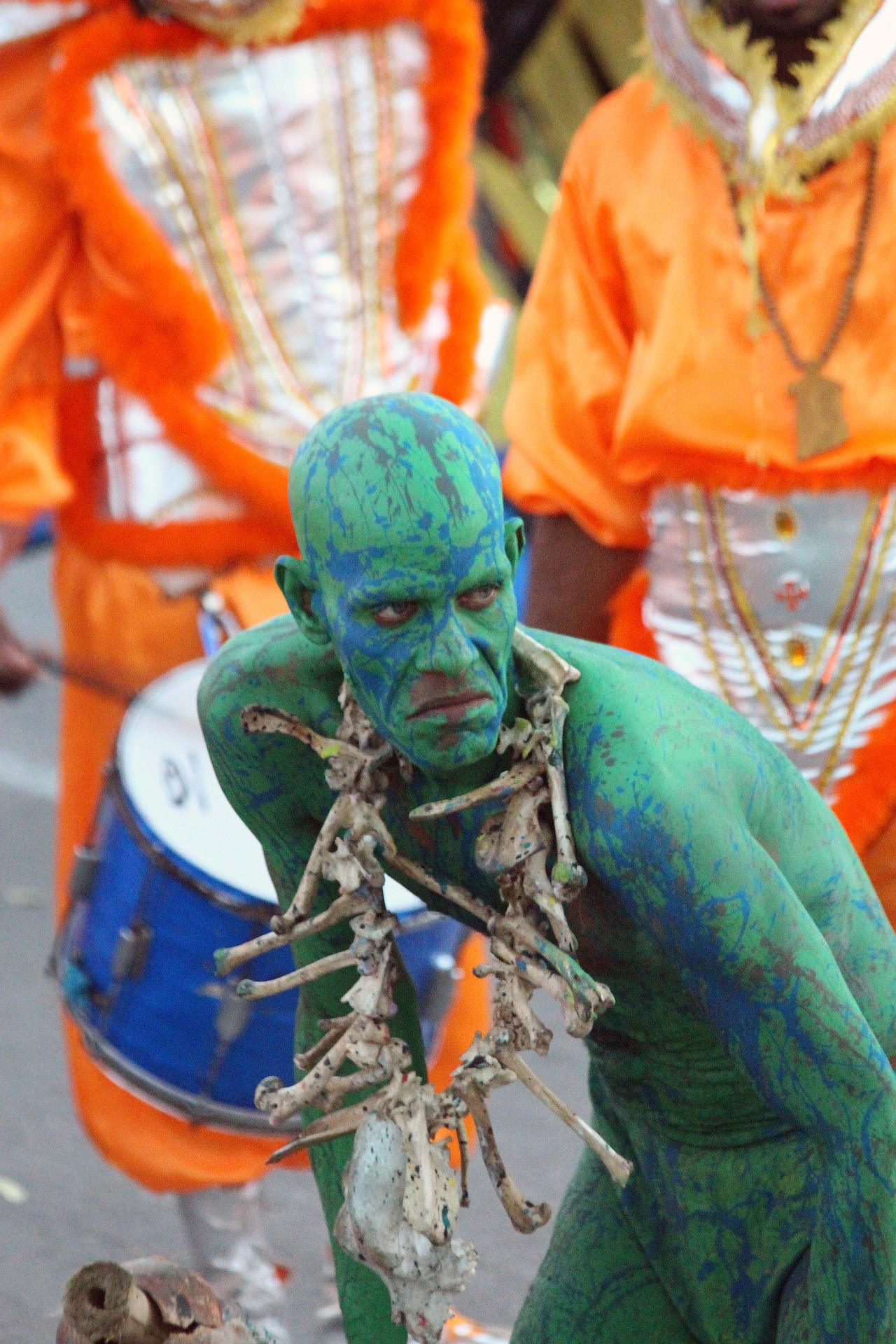 Hintadu culture sees humans operating in a world controlled by multiple unintelligible powers. In this dark setting, a few gifted beings or those on a mission for the spirits can act as a link between these powers and Hintadu people. The scholastic study of arcane magic is an almost exclusive prerogative of the western ethnic groups; among the Hintadu, third sight is regarded as a gift and a source of great respect. The innate ability to access the magical fabric, albeit to a limited extent, is also regarded with reverence or awe, depending on circumstances and the level of control developed. For all these reasons, it goes without saying that their customs have attracted the attention of Be Chuille's Inquisition, since their respective visions in relation to magic are totally incompatible, but until today repression has had a limited effect and has sometimes been aggressively opposed by the locals. Many seers and oracles have been put on trial and some have been given a Dyspelz, since the inquisitors could not prove their guilt, but others have been condemned and executed. Most of the spontaneous casters go into hiding, protected by the silence of their neighbours and the enormous distance separating them from the centres of the Inquisition. Divine magic too, is strongly linked to the superstitions of this people, so those able to dispense cures, through rituals and mysteric practices, are generally regarded with the same respect as seers. However, in the areas where Tuatha de Danaan cults are spreading and taking root, a strange mixture of the two cultures is being created because, to all intents and purposes, some of the spirits of the Hintadu tradition can be likened to Western deities.

The artistic productions of the Hintadu people are linked to the diffusion in their territories of a dark and hardwood: ebony. Although its processing, and even less its cultivation, isn't easy, the beauty of the products does not easily go unnoticed. Due to its natural characteristics, ebony is very easy to polish and resistant to parasites that normally attack wood, making it ideal for making small sculptures. Due to its aesthetic value and rarity, it is highly sought after by western timber merchants. Traditionally, the Hintadu have always produced statuettes or masks for apotropaic purposes from this material, but they rarely agree to part with it because it is considered a bad omen and socially unpleasant, unless the person receiving the object is truly deserving. It is therefore a great honour to receive one of these objects and a great lack of respect to refuse the gift. In periods and regions where ebony is scarce, such items are made with other lacquered and painted woods and even with clay and terracotta. Some villages in the Hintadu regions are built by digging into the hillside and others are painted in the traditional colours of the tribe, although these buildings have a very distinctive appearance they are not created with any particular artistic intent but more simply to meet a housing need in otherwise inhospitable regions. 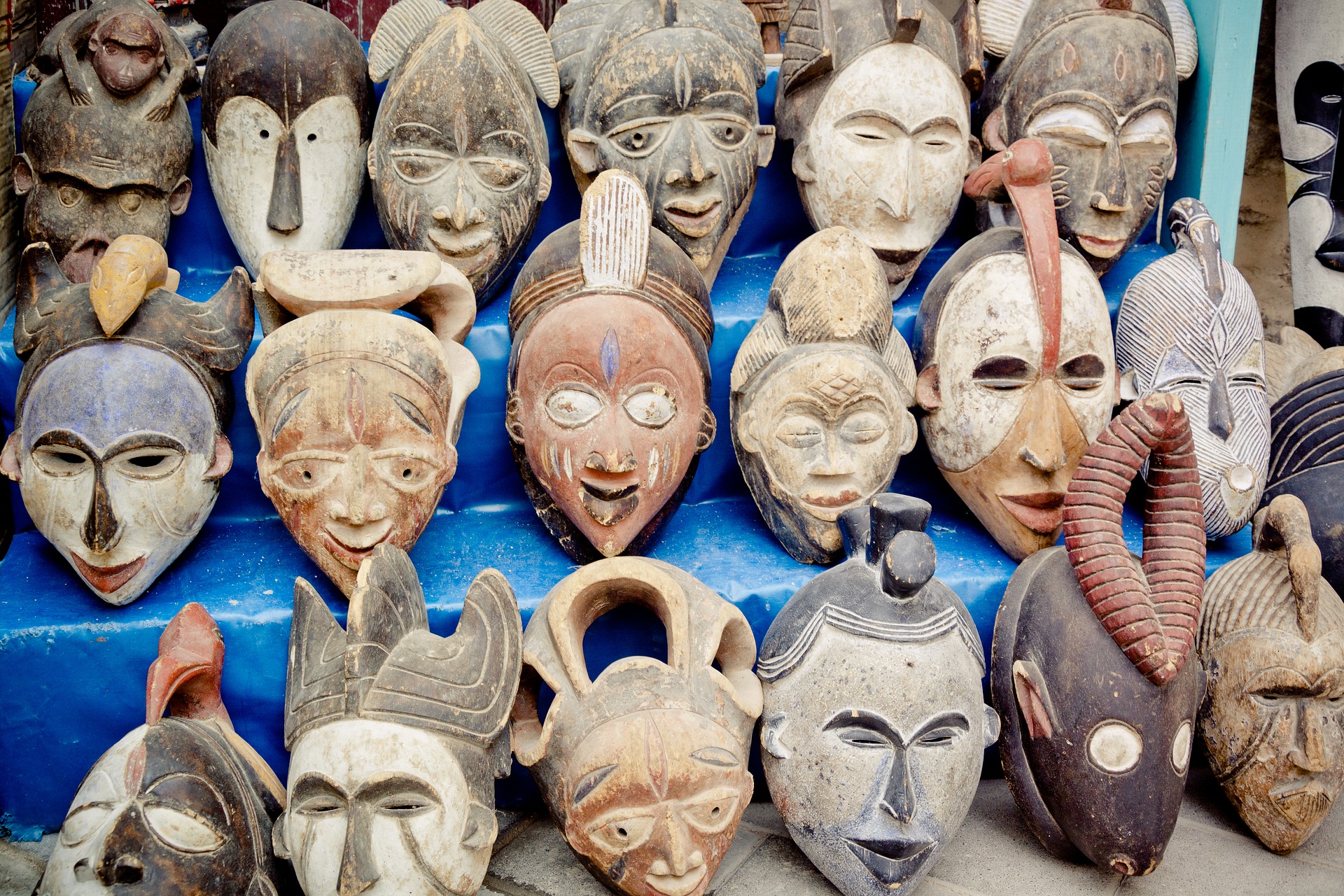 Amongst the Hintadu, the habit of playing sports for fun is scarce. The harsh environment makes living conditions hard enough that there is no room for excessive distractions. However, the members of this ethnic group are admired by westerners for their agility and resistance to fatigue, which is generally exploited for military purposes in the frequent clashes between neighbouring tribes. These characteristics make them excellent long-distance runners and jumpers. Other frequently practised pastimes are games of wits and strategy using dice and wooden or clay pieces that move according to specific rules on a wooden board or on a pattern drawn on the ground. The masters of these games are highly respected among Hintadu because they are considered brilliant strategists, although they generally do not consider Westerners very capable in this regard. 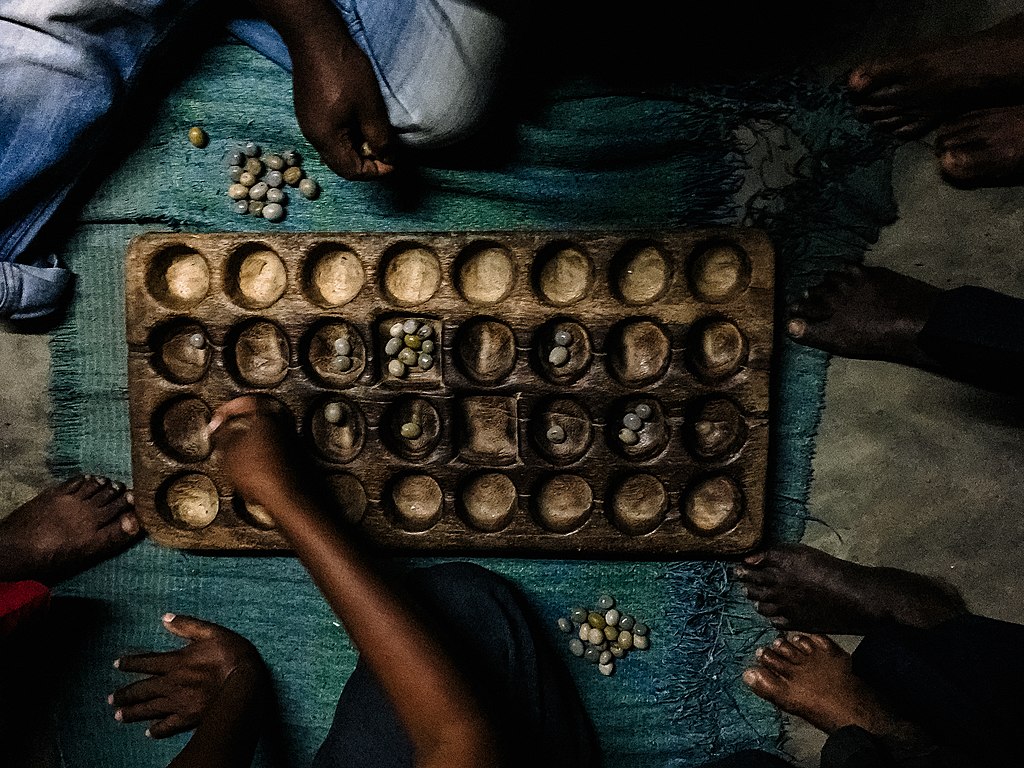 We underestimate the Pau, as Hintadu calls them, danger they are! Many will come and take what is ours, and what was our ancestors'. To make pacts with them is foolish and unwise!
- A Black wolf warrior.