The men glared down at their friends. Three of them were snoring as one or two small quarrels stuck out of their bodies. The fourth man lay unmoving and still, his open eyes as dead as the rest of him. Six of the little quarrels were stuck in his body. All their belts, sheathes, belt purses and packs were gone while their weapons were left on the ground where they had fallen from their hands. The dead man had his midriff neatly cut open and his liver was missing.   "Well, at least they didn't steal their livers," one of the men said to his two companions as he pointed to the three sleeping men.   "Saw us comin'," a second man said. "Now shut yer trap an' git t' carryin' em back t' camp afore them nisslin's come back with more t' take our livers."   They pulled out all the little quarrels before each man grabbed one of their fallen friends. They hauled them back to their camp which had nets stretched over it. Leafy branches had been spread over the nets to hide it from sky attacks.   Captain Four had insisted on bringing the nets and then using them over their camps every day of their expedition. This was the first day her men truly appreciated them.
— excerpt from The Hunt For Golden Jelly copied into Garzio-indar: Peoples page 19

Nisslings believe their kind was created by the mysterious dragon god MoorDoon. How MoorDoon created them is as much a mystery as is what kind and color of dragon MoorDoon is. They believe MoorDoon gave them their wings as well as their tails which they take great pride in. Tail bands and such are the height of fashion amongst nisslings who have little use for clothes other than for warmth if they find themselves in cold places. They do wear belts and harnesses to carry their tools and pouches. The night is their day as their eyes are adapted to darkness.   When it comes to hunting, if it moves, it's probably meat, and thus, meant to be eaten. Nisslings do not go out of their way to hunt people, but they do love a good raid. It is the liver of the fallen that is considered fair food and is to be shared with the victorious. This includes the livers of nisslings who have fallen. To leave a fallen nissling's liver is an affront to that nissling's soul who, according to the MoorDoon teachings, will then haunt the tribe who left its liver behind.   The nisslings believe MoorDoon taught them their tribal way of life and methods for them to stand as equals in a world filled with bigger folk.   Nisslings love to craft traps and set them throughout their tribal lands and within their lairs, to not only catch prey but to keep out invaders. Bows sized for a nissling are not well suited against the bigger folk so they make crossbows instead. Even then, their darts are small but MoorDoon taught them the art of poison.   Most recently, nisslings have discovered that by placing thin windows of dark colored glass over their eyes, held into place with leather straps, they can protect their eyes from the light.

MoorDoon's Secret is their most sacred lore. This secret is the trading and crafting of poison. It is so sacred it can never be spoken of, not even when trading or crafting it. Instead, nisslings use niss-cant, a style of hand-talk that uses no sound, only hand gestures. Though there are many types of poisons that nisslings make, only four were taught to them by MoorDoon's Secret.   The first of these is Scumfroggoo which puts its victims to sleep. However, if someone the size of a man takes six bolt wounds from it, they will die.   The second MoorDoon poison is Snakesnapper, a deadly venom that can kill a man with a single crossbow bolt. It is also a bit hazardous for the nisslings to harvest, as it must be milked from the fangs of living snakes, as MoorDoon's Secret dictates.   The third MoorDoon poison is Wyvergoo harvested from the tail spines of a living wyvern. One bolt is deadly enough to kill a giant.   The final MoorDoon poison is Purpflurp. One bolt can kill a dragon. Where the nisslings harvest Purpflurp from is a secret, and something rarely done, as it requires many of them to go out and get it with only a few returning.

A nissling is a sentient creature that walks on two legs. It has arms that end in hands with short strong claws made for digging. Their skulls are shaped like that of a short snouted crocodile with little knobby bone ridges above the eyes. Their bodies are covered in scales like that of a crocodile but not as thick and heavy. From their backs sprout a pair of leathery wings. Nissling colors range from rusty green to rusty brown with splotches of near-black markings for camouflage. Unlike crocodiles, nisslings are warm-blooded and able to survive in all temperate regions, though they find extreme cold climates uncomfortable. A nissling also has a tail nearly as long as the nissling is tall. It flattens slightly to provide balance and maneuverability when running or flying.

Nissling tend to live in tribes. Even if they leave their birth tribe, they form a new tribe amongst their friends. A tribe is led by a boss and his elite seconds, called barkers. Equal to a barker is the moodoo and the hoopla. A moodoo is a cleric dedicated to their god MoorDoon. A hoopla is a clever nissling who has learned magic or alchemy or, rarely, both. The bosses and barkers tend to be males as these ranks are determined by combat. Moodoo tend to be females and are often the diplomats of a tribe. They attain rank through study and earning respect over the years as they provide good wisdom to the tribe. Hooplas are equally male or female and generally are those within the tribe who cannot compete well in combats or have been denied training within the moodoo due to tribal politics. 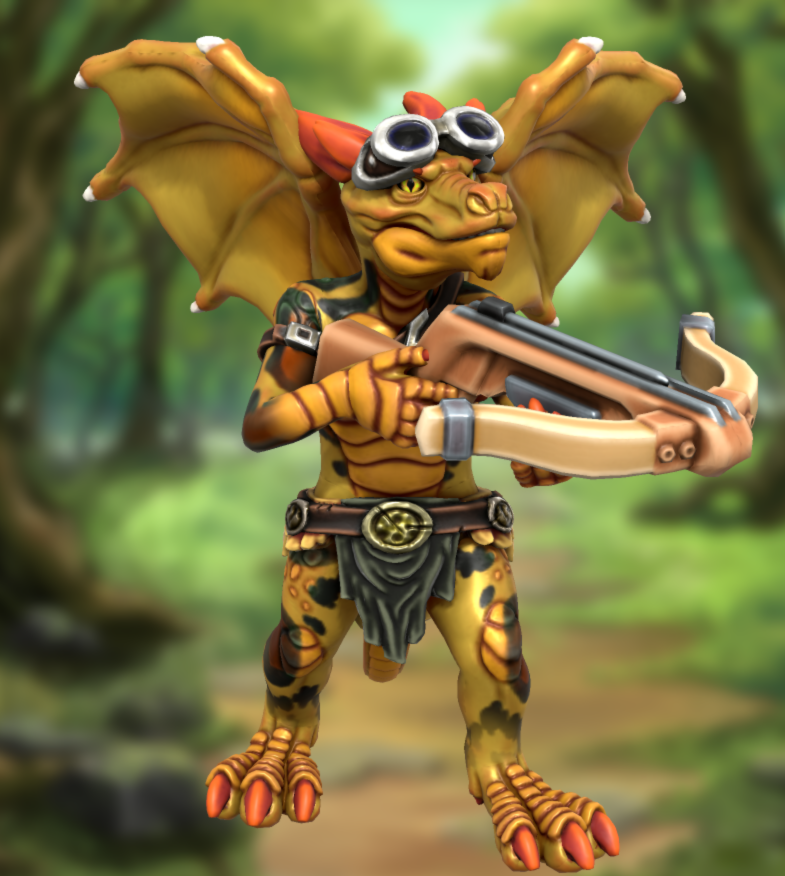 Nissling by Dazzlinkat on HeroForge
Scientific Name
Sauronoid
Average Height
Male nisslings, called muggers when adults, stand about three feet tall while females, called gimiks when adults, stand about two and three quarter feet tall. Height is the only visible difference between males and females as their genitalia is protected within a scaly cloaca.
Average Weight
Males weigh about thirty five pounds while females weigh about thirty pounds.
Special Sensory Capability   Nisslings can see exceedingly well in darkness. So well, in fact, they can fly in utter darkness. With such sensitive dark sight, nisslings shun daylight as it hurts their eyes. A flash of bright light will stun and momentarily blind them.   Dietary Habits   A nissling eats meat of all kinds, from fish, to insects, to birds, to animals. The eating of people is limited to eating the livers of those fallen in combat, including the livers of fellow nisslings. Only during extremely harsh times will nisslings eat more than the livers of people, including their own kind.   Ecology   Nisslings love forests or jungles where the leafy canopies shelter their eyes from daylight. If the forest or jungle has trees large enough that there is a hollow beneath their trunks big enough for a nissling to dig, a lair will be made down into the ground. This will be their home hidden from spying eyes. If no such tree exists, they will dig a lair in a hill or ruin surrounded by the wildest growth in the area. This wild growth is often tended and nurtured along by the nisslings.   Reproduction   Mating between nisslings happens during the last three moons of the year, as this is the only time female bodies can breed. Two moons later, a female lays her eggs in a leafy mound nest within a cave or prepared dark room. Females will tend their nests without leaving it until the eggs hatch after an entire moon has passed.   Growth Rate   Once a nissling hatches, he or she can eat the same food as the adults, as long as its cut down to hatchling sized pieces. For the first moon after hatching, the tiny nisslings learn to walk. It takes another moon for them to learn to fly. Once a hatchling can fly, it joins the tribe. The hatchling will continue to grow up raised by the whole tribe. A nissling grows from hatchling to adult in ten years and lives to about eighty years of age.

Okay these freak me out. O_O

Thanks ... they are meant to be creepy and cute ... and deadly

The liver eating thing is... interesting... The eating the liver of one's best friend who just happens to have gotten killed is a little more... interesting... But I'd look forward to seeing the game stats of these critters... they sound like a great "surprise" for parties that are used to swatting away annoying bunches of kobolds or other relatively harmless low-level threats.

Thanks! Stats are currently Under Construction

Damn these are weird creatures, the liver eating especially is not very fun. The part about MoorDoon's secret is really interesting, I like that they have a section of their culture devoted to poisons!