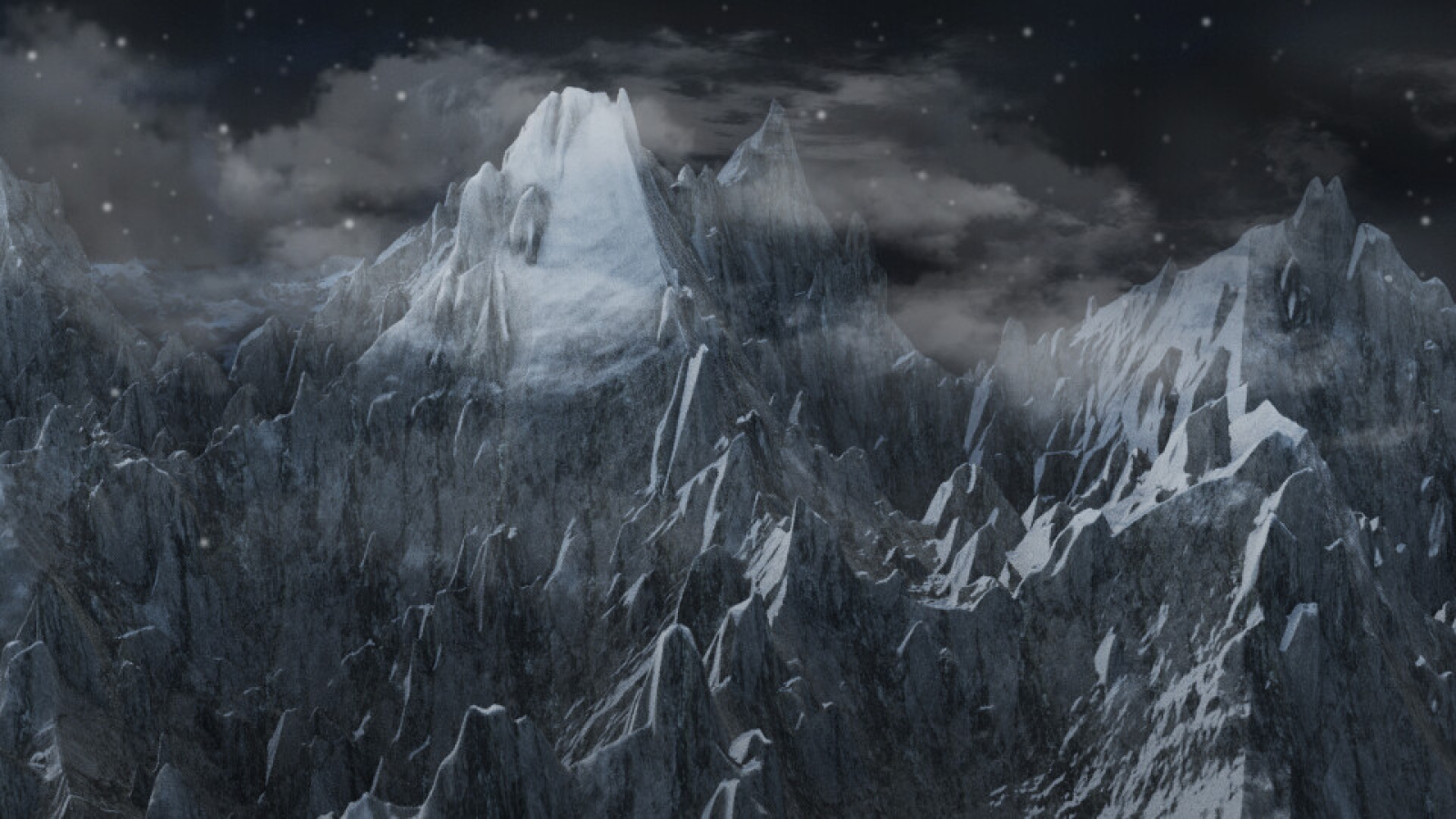 Beyond the gates of Bhara'Dur lies the rime-frosted crags of the Icestrahl Aerie. These jagged, black mountains, encrust with snow, and ice are wind-scarred temples of dark stone covered in deep drifts of frozen powder, flocked only by a few scattered groves of pine, and fir trees. The wind in the Aerie howls day, and night. Its force forever raining winter down upon the Rimefall Taiga below. The temperature in the Icestrahl Aerie ranges from (-40°) to (-5°), and during strong storms, even lower. In the furthest reaches of the world of Orr, the light of the sun burns only for a few short hours during any given day, and is swiftly replaced by an expansive twilight that wanes into pitch black darkness.   Those who sojourn into the north must first overcome this dangerous, and dreadful trek into the wider valley below, or risk following its crags and peaks to even more remote edges of the unknown lands of Ancoran. While the rangers of Bhara'Dur do sometimes travel out into the Aerie to repair some of the many rope bridges, and chisel the ice from much-needed handholds along the path, they rarely have time away from their duties to see to this maintenence, and furthermore, few of them are willing to risk being caught in the snowstorms that blow across these mountains for there is a habit of travelers that brave them going 'snow-blind' and falling to their deaths in an unusual compulsion to travel northward towards the distant auroras that lie beyond the Crest of Night.

The Path of the Watchtowers

Following the northeastern ridge of the Icestrahl Aerie, the exiles that set out from Bhara'Dur may find the remnants of several firewatch towers along the mountains. These striking structures are visible from miles away, and the crystal relay system that connects them is said to hum in the very air, making them even easier to locate. Those travelers that take the time to consult the rangers, or the Mithril Officer of the fortress at the end of the world are often directed towards this path as the safest to travel to reach the valley floor of Ancorran. The mountain range, while still treacherous, is much less jagged, and a dogsled can travel from the gates of Bhara'Dur to the windswept taiga valley below without encountering too many obstacles. The trek is long, however, taking nearly three weeks or one and a half by sled.   The watchtowers were constructed in the early years of the Third Age, when Drin's Iron Legions had begun to probe Ancorran for precious stones, and minerals. Even the watch of Bhara'Dur do not hold record as to the exact reasons for the building of the watchtowers save for a few notes left in the care of the Mithril officers of the fortress simply citing 'unknown fires across the mountains'. Before Ancorran became encased in ice the Taiga in the valleys below would have suffered devasting yearly fires during the summer months, but such an phenomenon could not have occurred since the beginning of the second age. More likely, the towers were built to safeguard against volcanic eruptions, as some of the volcanoes within the Icestrahl Aerie are still active.   In order to make use of such towers however, the Iron Legions constructed a crystal relay system. An arcane invention of Drin whereby foci crystals are attuned to the Astral Plane in order for messages to be sent quickly across great leagues of distance. This machinery, and equipment was a prototype in the era it would have been installed upon the towers, and has been greatly improved upon since, but perhaps the old system still retains some of its integrity, and use? 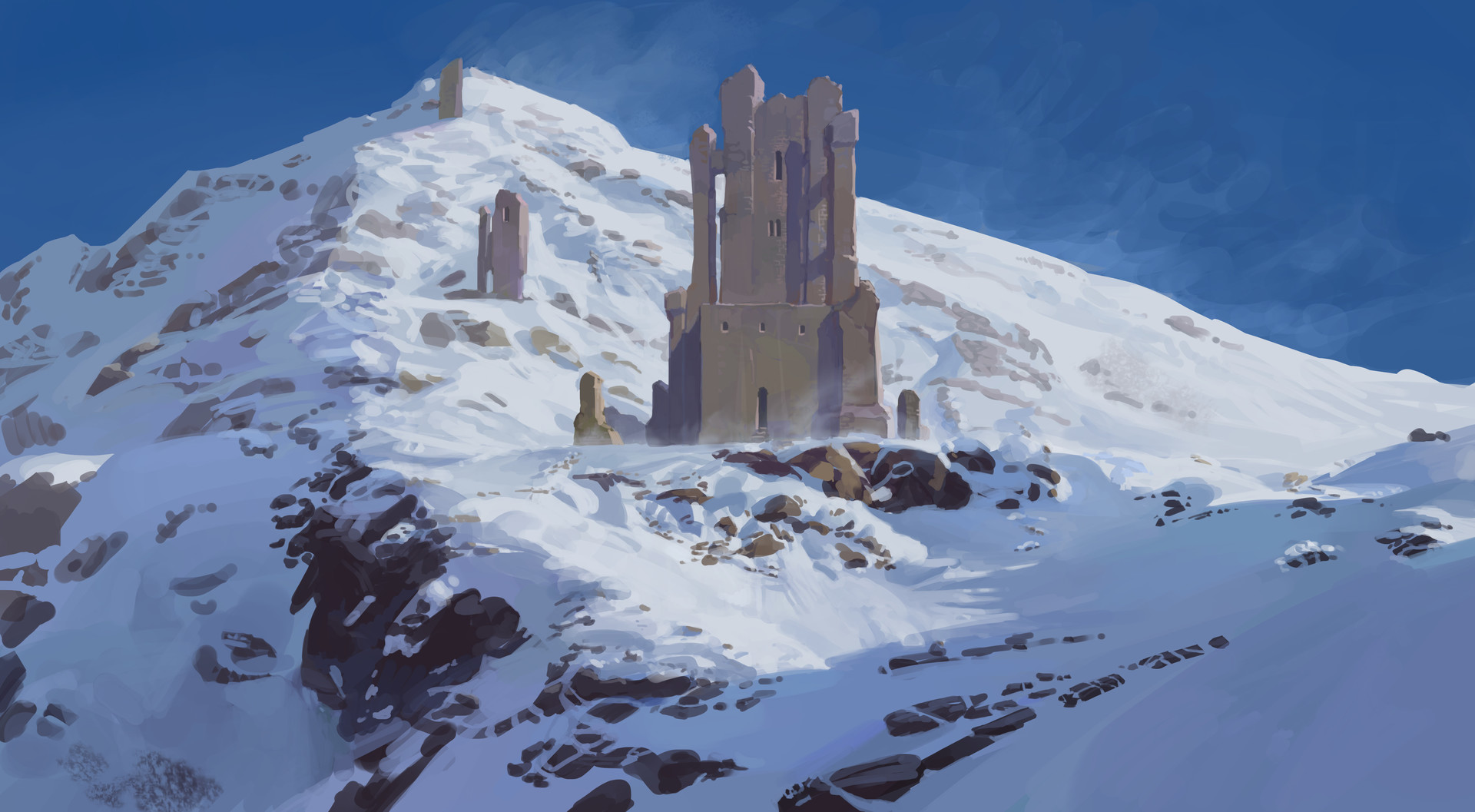 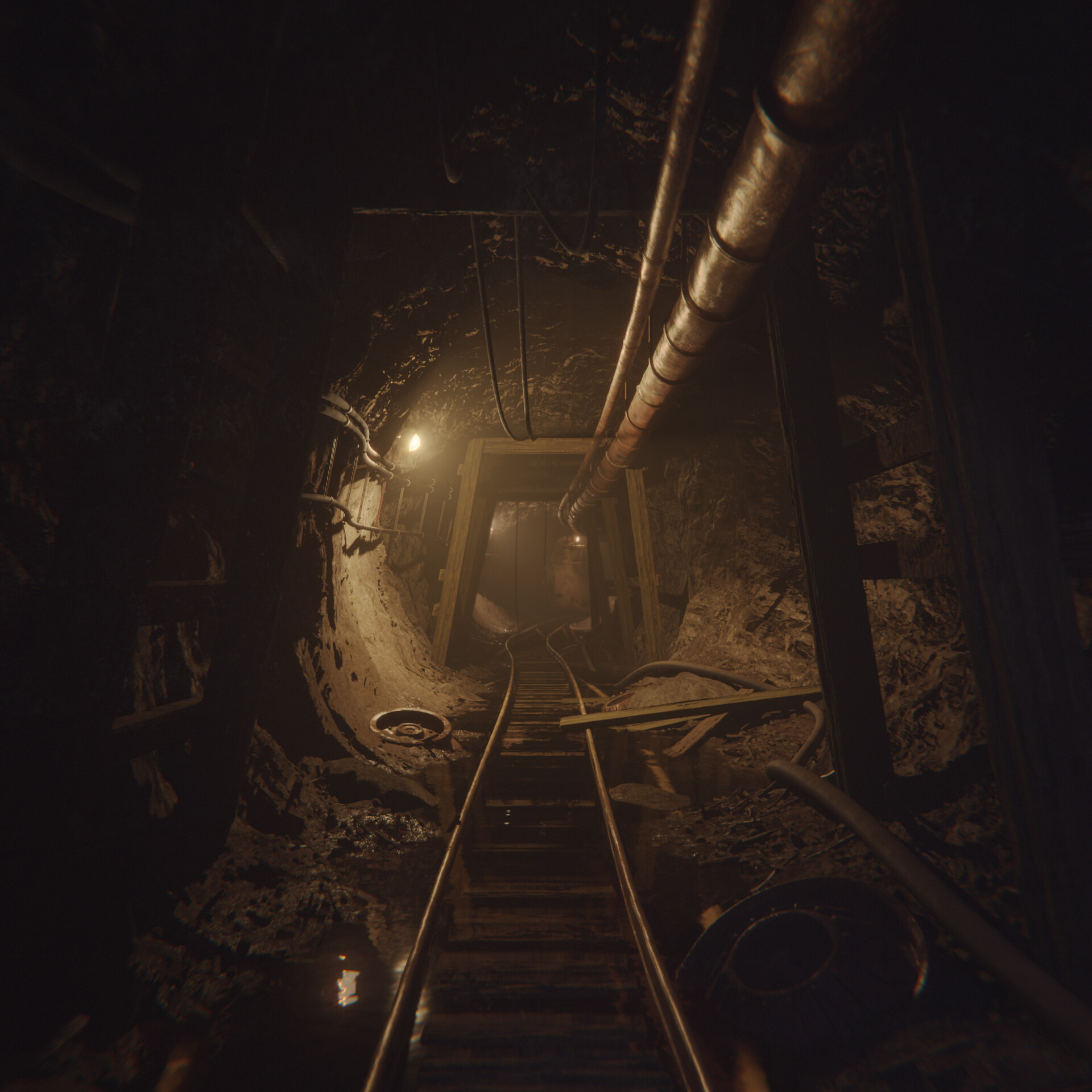 Mine Shaft by Jonas Bentzen

Translated very roughly in the dwarven tongue to common, Gharaz Mhorga would mean 'Needle in the Dark'. For those exiles, and travelers of the frozen wastes of the north seeking to reach the valley floor with haste, the path through Gharaz Mhorga would perhaps be suggested, but always with caution. The mine was part of Drin's expansion in the Third Age, and when it was first constructed, acted as a profitable source of electrum, and silver, as well as stone to be used for repairs at Bhara'Dur. The veins quickly dried up, however, and in an 'classified event' the mine was very suddenly abandoned. Very few exiles have traveled through the mines since, and those that have often never return. There are rumors of strange Numenera in the mine's depths.

Predators of the Peaks

Ancorran is a famously dangerous location in the world of Orr. Even the known fauna and flora that is found there is said to be twisted, or cursed in some way. The Icestrahl Aerie is no exception, and the beasts that roam it are said to be fierce, and depraved variations of those known on the main contenent. However, there is one beast amongst the Aerie that is king. The Icestrahl Griffons. These enormous variants of an already dangerous predator have the head of an owl, the body of a massive snow leopard, and the claws of giant eagles. The rangers of Bhara'Dur occasionally set traps for them to quell their numbers, fearing that the mighty, winged hunters may one day satiate their hunger with the meat of the men in the fortress. 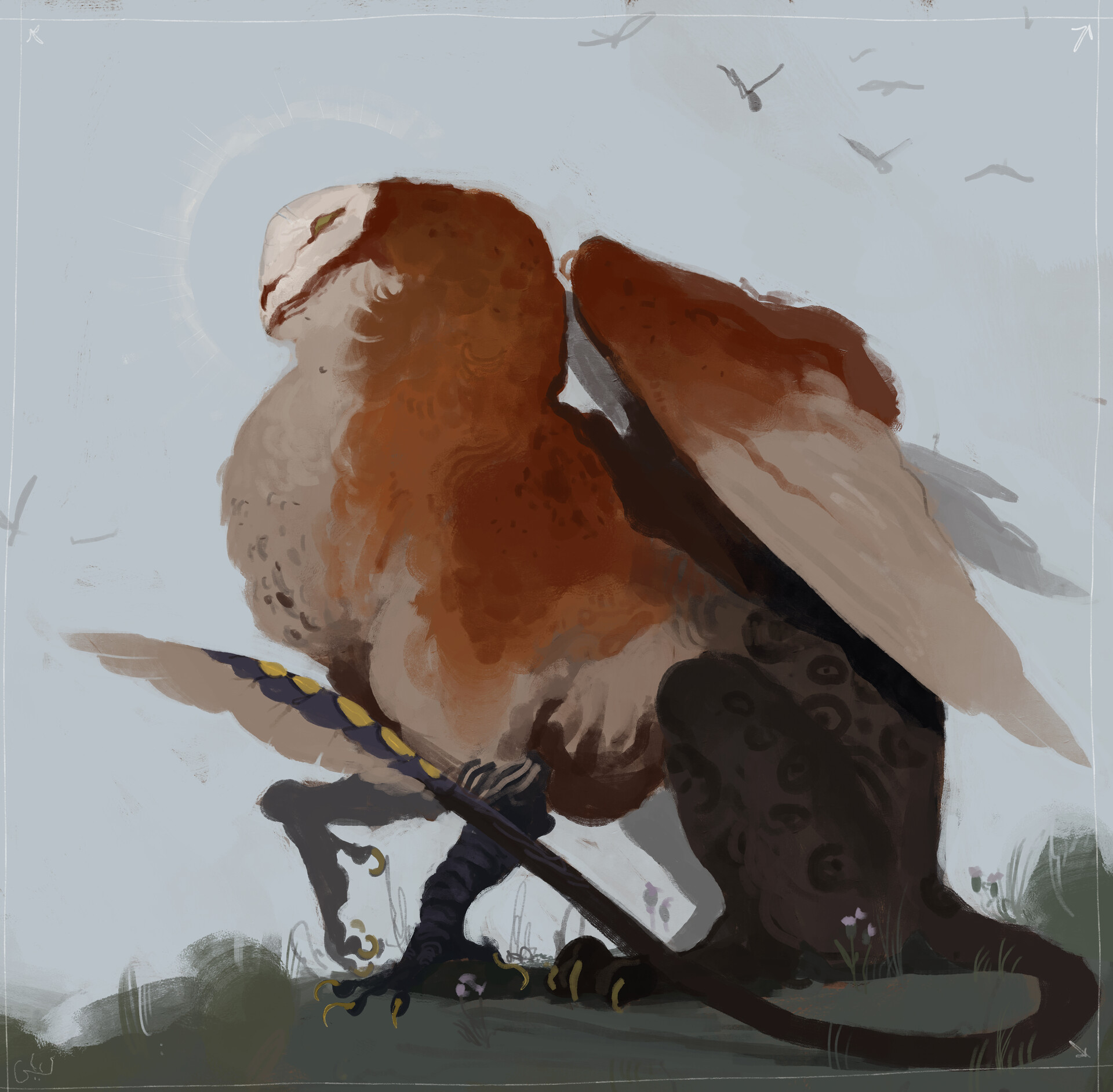 Door to Jotunheim by Luciano Gatto


The ancient, poetic eda of Jordkheim, the heroic figure of the 'Lost Sagas' speak of the Icestrahl Aerie acting as the final resting place for the skalds that journeyed with him during his mythic quest into the Outer Night. This location was called the 'Sagahall' but is sometimes referred to in the oral traditions of the Skovjord Magi of Aardwulf as 'Vulstag's Tomb.' Historians still debate the nature of Vulstag, and Jordkheim's relationship. Vulstag is often spoken of in the sagas as Jordkheim's closest ally, and a wise man whose wisdom nurished him through his travels, but other passages speak directly of the pair sharing warmth in the frozen wastes of Ancorran. Perhaps we will never know their true bond.
— Sapphora, Historian